“With its sleek Perpetual Curve design, the contoured all-metal body of the Digital IXUS 750 represents the pinnacle of Canon design excellence” says Canon’s official website about the new Digital IXUS 750. I’m afraid I have no idea at all what a “Perceptual Curve” might be, but if it means that the 750 is a very pretty camera, then I guess Canon’s right.


Canon’s long-running IXUS range of film and digital cameras has always been designed with an eye for style rather than complexity. While superbly well made and capable of producing excellent photographs, they have usually been extremely simple to operate. Some people might say they’re designed to appeal to women, but that would be gratuitously sexist and very, very wrong, so of course I would never say such a thing. Please don’t hurt me. 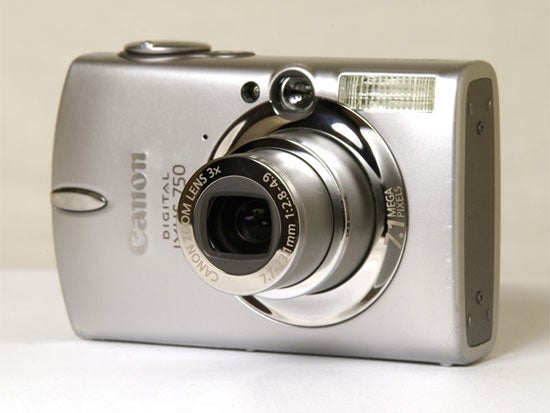 Attractive though the IXUS 750 may be, there’s a lot more to it than just a pretty face. It’s tough as well. The curved contours of the sleek pressed alloy body give it inherent strength and rigidity, and the smoothly rounded and securely mounted controls are designed to resist damage, as well as snagging on clothing. The immediate impression upon first handling the camera is one of compact strength and solid quality. It is quite a heavy camera for its size, but it’s a reassuring weight that comes from a camera stuffed to bursting with the latest technology.


This technical sophistication becomes immediately apparent as soon as you turn it on. It starts up quickly and smoothly in under a second, which is extremely quick for a camera with an extending zoom lens. The big 2.5in LCD monitor is bright, with good contrast, a wide angle of view and an extremely fast refresh rate. With a resolution of 115K pixels it could possibly be a little sharper, but it’s not really a problem. The 750 also has an optical viewfinder, although it is a bit small and only has approximately 85 per cent frame coverage, but then it probably won’t be used much by this camera’s target demographic. 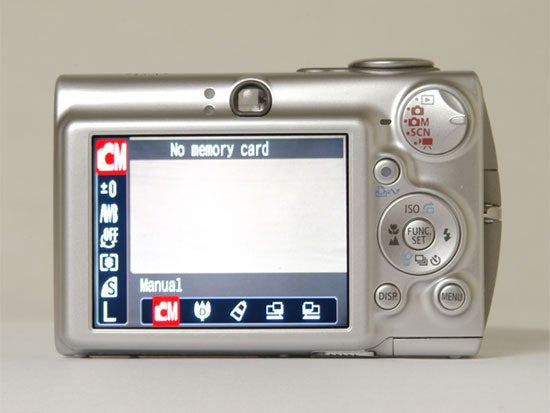 The Canon AiAF autofocus system is also very quick, focusing in good light in about 1/5th of a second. It is a little slower in low light, but thanks to the AF illuminator it can focus in complete darkness. In practical tests, the illuminator beam had an effective range of at least four metres.


This is probably also a good time to mention the IXUS 750’s fantastic built-in flash. In the camera’s specification sheet its stated range is five metres, but in actual use I found it to be closer to eight or nine metres. It really is astonishingly powerful, easily bright enough to illuminate a large room. It does produce quite ferocious red-eye though, as well as cries of “Argh! I’m BLIND!” from anyone looking your way when you fire the thing off. Cruel, but amusing. 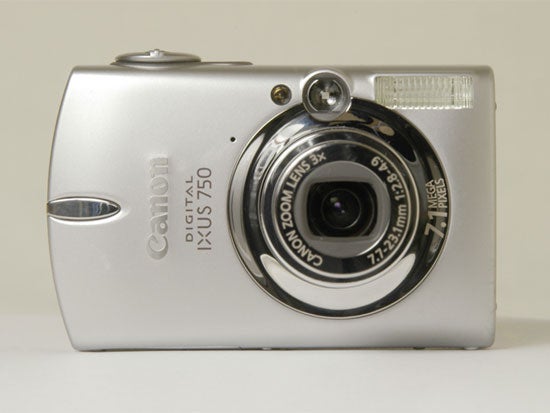 Although it is first and foremost a snapshot camera, the IXUS 750 does have some useful features. The main mode dial offers three main shooting modes, auto, manual and scene mode, each of which provides differing levels of user control. In each mode, settings can be adjusted quickly and easily by pressing the function button, which activates an easy-to-use on-screen menu of frequently used options selected via the D-pad. In manual mode this gives access to exposure compensation, white balance setting, image effects, metering mode, compression quality and image size.


In the nine different pre-programmed scene modes only exposure compensation, compression and image size are controllable, while in full auto mode even exposure compensation is disabled, leaving only compression quality and image size under the user’s control. Full auto mode also disables some of the functions in the main menu, but in manual mode the full range is available, including two and 10 second self timer, composition grid lines, and digital zoom. Kudos to Canon for having the default setting on the digital zoom as ‘off’.


Other frequently used options are accessed by secondary functions of the D-pad, including ISO setting, macro mode, drive mode, self-timer and flash mode, although some of these are unavailable of limited in full auto mode. 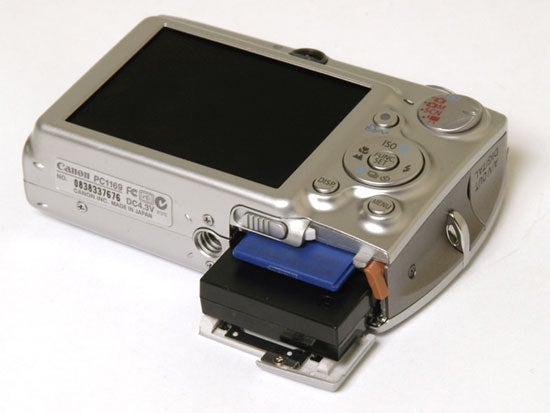 The IXUS 750 also has a very capable movie mode. It can shoot video clips in 640 x 480 resolution at 30 frames per second with audio, which is good but not unusual, but it also has the ability to shoot 240 x 320 size clips at 60 frames a second, which can then be played back at 30fps giving a slow motion effect. I don’t think I’ve ever seen this particular feature before on any other camera.


With this in mind I was expecting some fun features in playback mode, but surprisingly all that I found was a basic list of options, including image rotation, viewing images as a slideshow, adding a sound memo, erasing or protecting an image, and tagging an image for printing. The IXUS 750 is PictBridge compatible, so it can be connected directly to any suitable printer without the need for a PC.

As I mentioned previously, Canon’s IXUS cameras have a good reputation for picture quality. The IXUS 750 does nothing to tarnish this glowing record. With a 7.1 megapixel sensor, a very high quality lens and Canon’s outstanding DIGIC II processing engine it produces superb results, with tons of rich sharp detail, superb colour rendition and perfect exposure in virtually all conditions.


Although best suited for flash-lit indoor social photography, the IXUS 750 is also quite capable of turning in fantastic outdoor snapshots. The excellent Canon 3x optical zoom, 7.7-23.1mm (37 – 111mm equiv.) F2.8-4.9 lens produces barely a trace of corner blurring, although it does show some barrel distortion at the widest setting. Noise control is very good at lower ISO setting, although things do get a bit loud at 400 ISO. 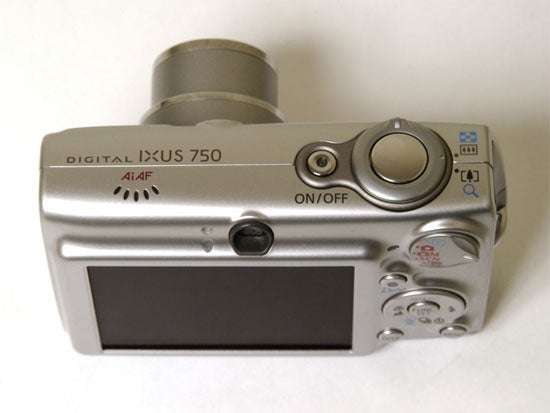 Of course all this sleek design and technical cleverness comes at a price, and the IXUS 750 will set you back a not inconsiderable £319. Compare this to the similarly specified Nikon CoolPix 7900 at £229 or the 8MP Olympus Mju 800 at £269, and it suddenly begins to look very expensive. However if you put a high value on style then maybe it’s worth it.


There’s no doubt that the Canon Digital IXUS 750 is a great little camera. It is compact, superbly well made and simply oozes style. It also takes a damn fine picture. However the inflated price compared to other equally impressive models from other manufacturers makes it an expensive luxury. 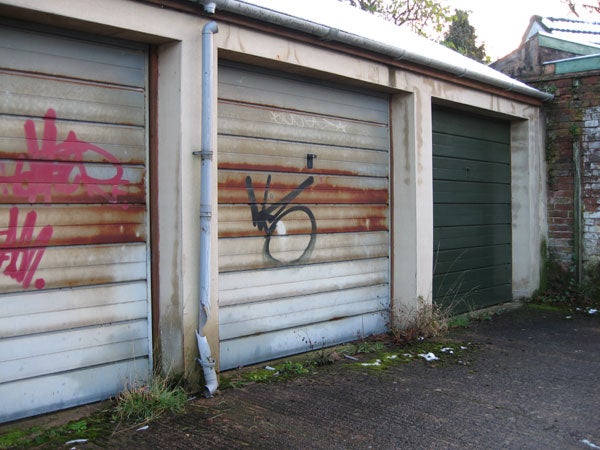 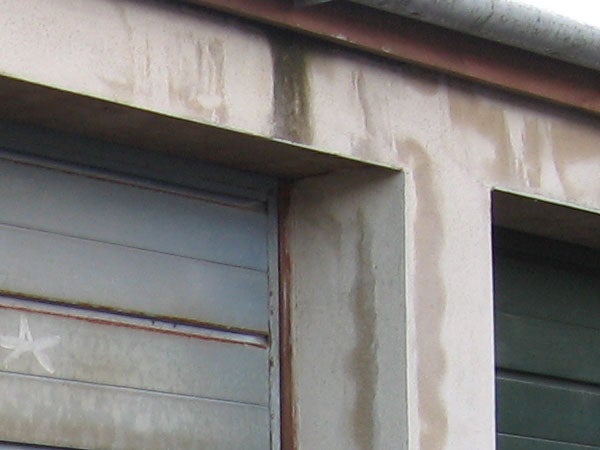 At 50 ISO the IXUS produces very smooth images with absolutely no trace of noise. 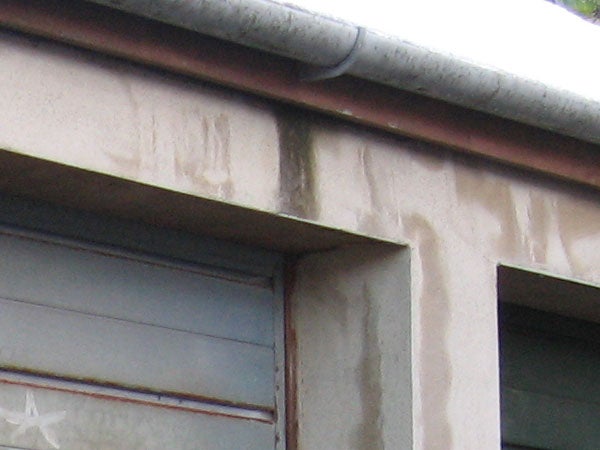 At 100 ISO the image is still noise-free, although the colours are slightly less saturated. 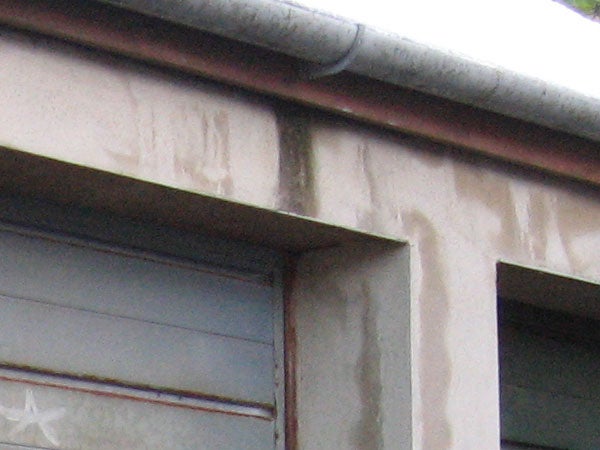 At 200 ISO there is some image noise and colour distortion in the darker areas of the picture. 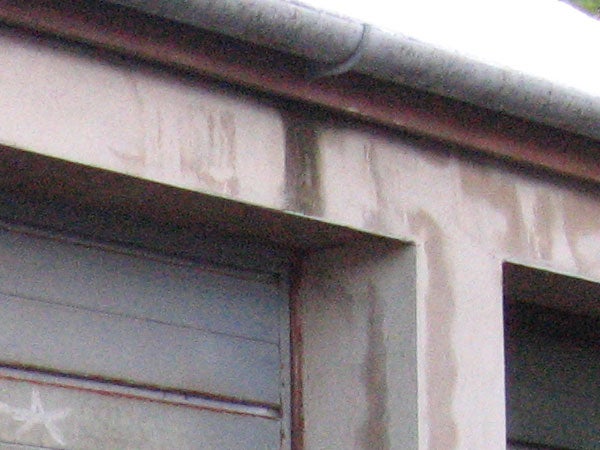 At 400 ISO the image is quite noisy, lacks contrast and saturation, and some of the colours are distorted. 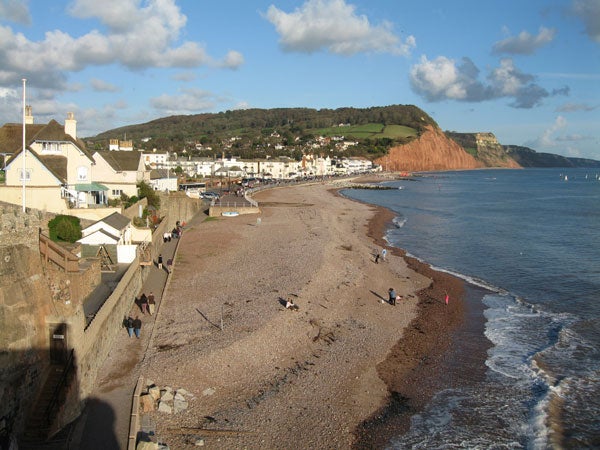 The widest setting on the 3x optical zoom lens is equivalent to 37mm on a film camera, not really wide enough for good panoramic shots. 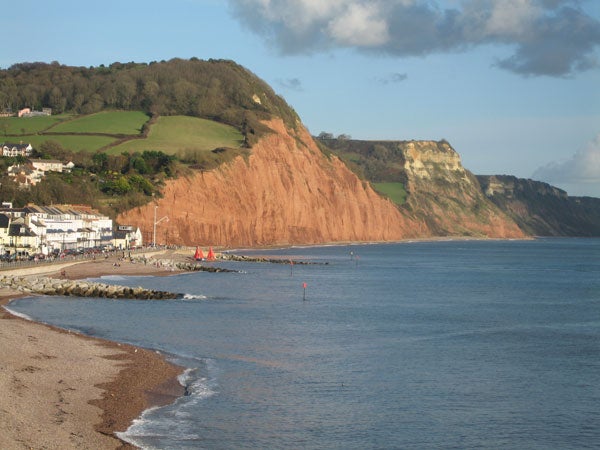 This shot was taken from the same position as the shot above, to demonstrate the difference between the wide angle setting and the 111mm-equivalent telephoto setting. 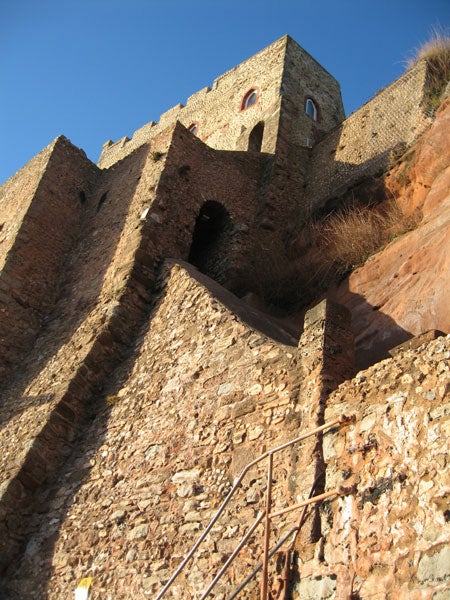 The DIGIC II processing engine achieves near-perfect colour reproduction, such as the reds and browns in this late afternoon shot of the old coastal fort at Sidmouth in Devon. 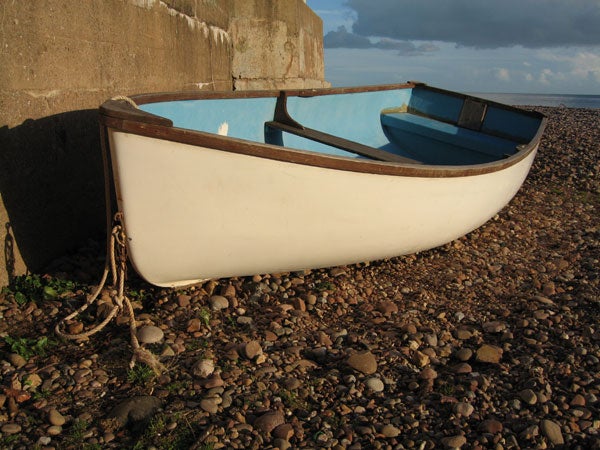 Another late afternoon shot, but the IXUS has perfectly captured the subtle tones of the fading light. 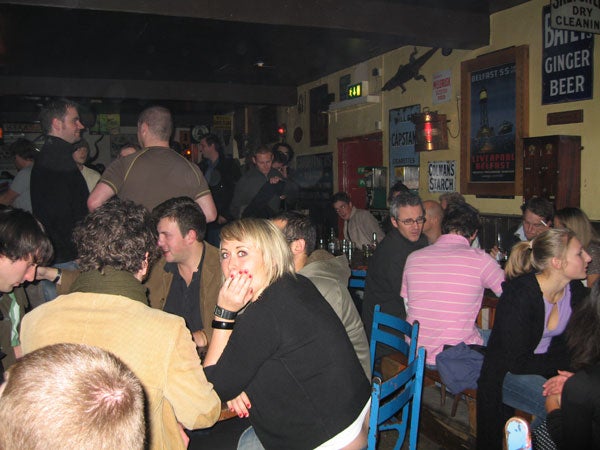 The amazingly powerful built-in flash has managed to fully illuminate this very large room at a local nightclub. The back wall is at least 10 meters away, but is still quite well lit. 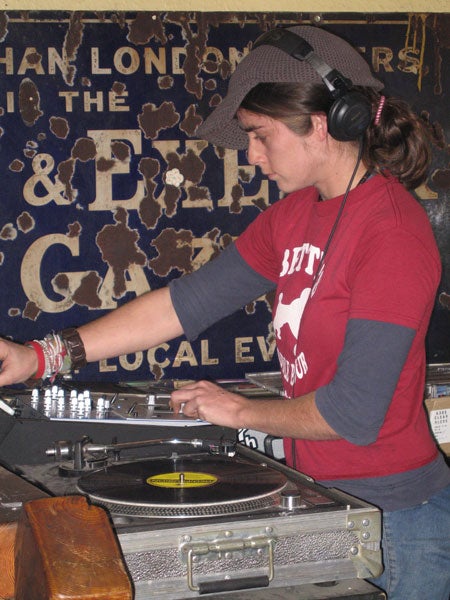 The AF illuminator has an effective range of at least 4 metres. This shot was taken at full zoom in a dark corner of a nightclub. 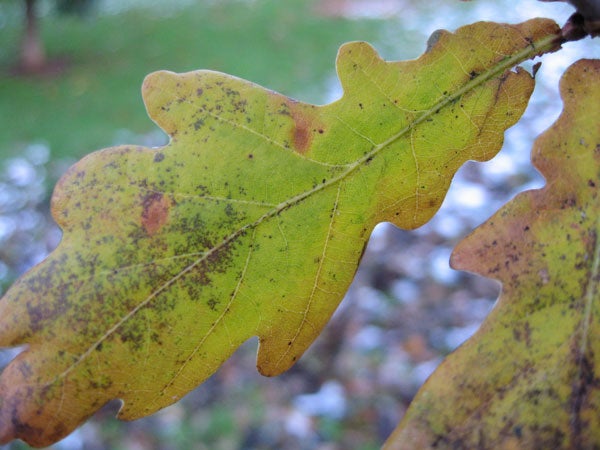 The minimum focusing distance in macro mode is 5cm, which is approximately the range of this shot. Focusing was quick and sharp and there is plenty of detail. 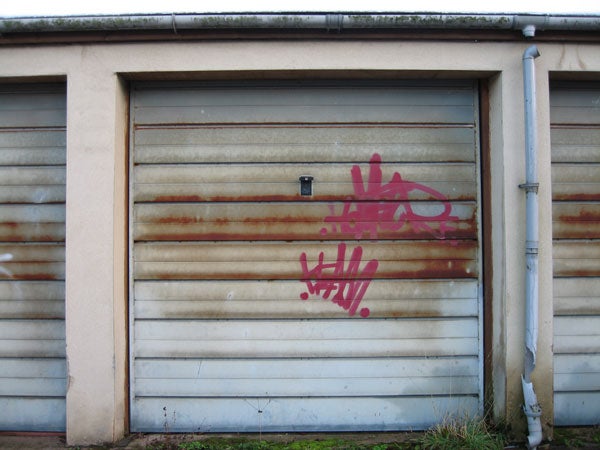 The lens does suffer from some barrel distortion at wide angle, as shown by this shot. The vertical and horizontal lines should be parallel.