Back in February I was invited along to Canon’s launch event for its “Spring Collection”, in which the company unveiled a range of new A-series and IXUS models, including this little beauty, the new Digital IXUS 70. This 7.1-megapixel model is replacing the IXUS 60 launched last year as the entry level model in Canon’s five-model Digital IXUS range. 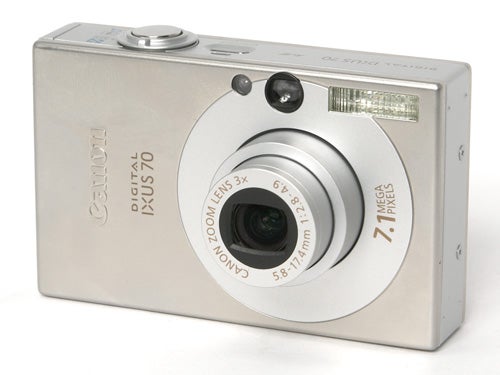 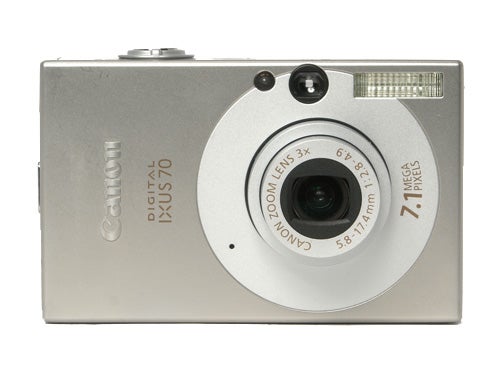 The IXUS 70 has, to say the least, a striking design. Apparently modelled after the original IXUS APS film camera, its shape is a very minimalist plain rectangle, with the lens, the monitor screen and all the rear panel controls mounted smoothly flush with the body. People to whom I showed the camera while I was testing it were divided pretty evenly between those who though it looked cool and stylish, and those who thought it was ugly and boring, which just goes to show that there’s no pleasing everyone. Personally I really like the way it looks, but to be fair the design does cause one or two minor problems. For one thing, trying to operate the controls in the dark is very difficult, because their flat shape makes them almost impossible to find by touch. Another troublesome design feature which has, I suspect, only been included for its cosmetic effect, is the optical viewfinder. A decent optical viewfinder is a real advantage, especially when bright sunlight makes your monitor screen difficult to use, but the viewfinder on the IXUS 70 is so small and fiddly that it’s pretty much useless.

So that’s what I don’t like about it. Now lets move on to the things that I do like. It’s almost redundant to mention that the build quality is fantastic, because I’ve yet to see a Canon IXUS camera where that is not the case. The IXUS 70 has a strong steel case finished in two slightly contrasting matt textures, although it is also available with black trim. The flush-mounted controls and lens have the advantage that there are no protrusions to snag on clothing or pocket linings. One concern however is the battery/card slot cover, which is made of extremely flimsy plastic, including the hinge. The tripod bush is also plastic, so care must be taken to avoid crossing the thread. 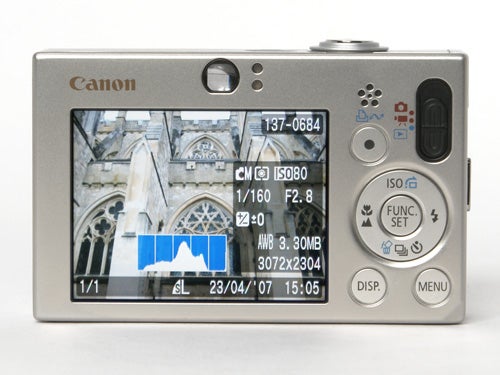 The IXUS 70 has a good range of features, including ten scene modes, a wide range of special colour options including settings for different skin tones, an adjustable self-timer and a movie mode featuring a time lapse option. One surprising omission is Canon’s excellent optical image stabilisation system, more surprising since the far less useful face-detection system has been included. The red-eye-reducing pre-flash that annoys the heck out of most people has been dumped in favour of automatic software-based red-eye removal, which I think is a great idea.


If you’re not impressed by its appearance or features, perhaps the performance will change your mind, because it is quite exceptional. The IXUS 70 starts up in well under a second, by far the fastest start-up I’ve ever seen in a compact camera. Focusing is also extremely quick, locking on in less than half a second in most lighting conditions. Low light focusing is especially good. The camera focuses quickly and fairly reliably even in complete darkness thanks to a powerful AF assist lamp with a range of several meters. I did find that the accuracy of the nine-point AiAF system was a bit unpredictable when shooting nearby subjects, often focusing on objects in the background rather than the foreground subject, but switching it to centre-only AF solved this problem. 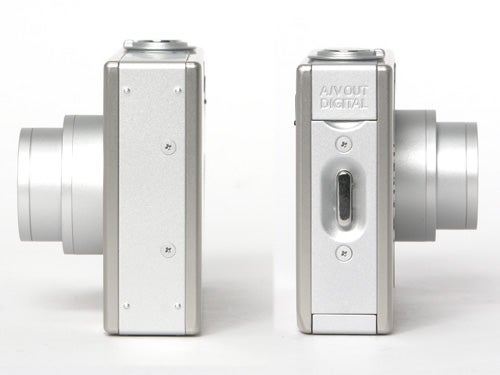 Shooting speed is also very impressive. In continuous shooting mode it can take a shot every 0.6 seconds and keep this up until the memory card is full, which is well above average for a compact camera. In single shot mode it is just as fast, although using the flash does slow it down somewhat, since it takes between four and six seconds to recharge between shots.


Canon’s promotional material for the camera claims that the 760mAh Li-ion battery has a duration of 210 shots, which I suspect may be on the conservative side. I took around 150 shots, many with the flash, as well as several short video clips while testing the camera and the power meter was still reading a full charge.

File compression seems to vary much more widely than usual, with shots taken on the highest quality setting varying between 2.2MB and over 4.1MB, although the average was around 3.5MB, roughly what I’d expect from a 7MP camera. I have no idea why there should be such a wide variation, since the camera appears to use standard JPEG compression, but it does mean that the number of pictures you can fit on a memory card will vary greatly depending on what sort of pictures you take. However the camera seems to think that a 1GB card is enough for 322 shots, or just over eight minutes of video at the standard VGA 30fps setting. 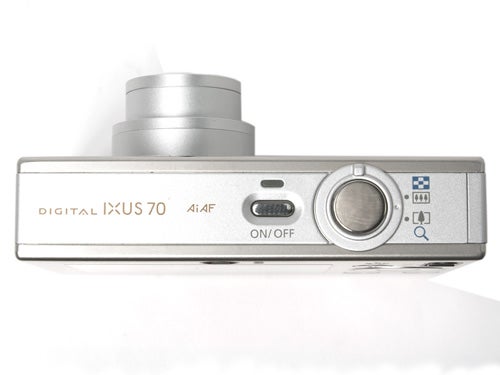 As has been the case with some previous IXUS cameras, picture quality has many good points but also a few bad ones. Overall exposure and colour reproduction are never less than superb, with the multi-zone metering system coping easily with some very tricky shots. The level of fine detail is also very good, but the haphazard file compression produced visible artefacts on a number of pictures.


Canon lenses are usually very good, and this one produces good centre sharpness and very little barrel distortion at wide angle, but I have to say that corner sharpness could be a lot better. As I’ve mentioned, the camera copes very well in low light and the built-in flash is excellent, providing superb frame coverage and colour balance, and easily surpassing its listed 3.5m range.


Canon’s noise control system is usually very good, and the IXUS 70 is no exception. There is no visible noise from 80-200 ISO, only a slight amount at 400, and even at 800 and 1600 the noise reduction system greatly reduces visible colour distortion, although there is considerable loss of detail especially at the highest setting. 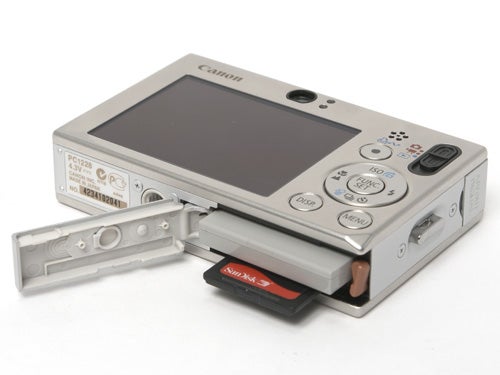 My main concern with regards to image quality is the surprisingly high level of purple fringing visible on many of my test shots. I know this is a common problem with many small compacts, but I would have expected better from such a sophisticated little camera as the IXUS 70.

The Canon Digital IXUS 70 is a wonderfully stylish ultra-compact which offers lightning-quick performance, outstanding low-light ability and a useful range of features. Value for money is also surprisingly good for what is usually an expensive brand. Its picture quality isn’t perfect, but it can produce good results under difficult circumstances. For social photography and holiday snaps it will not often disappoint. 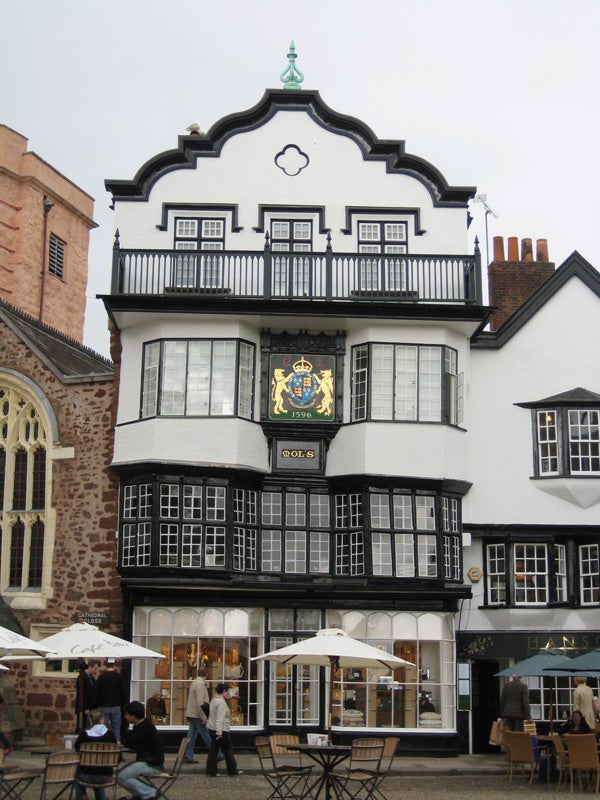 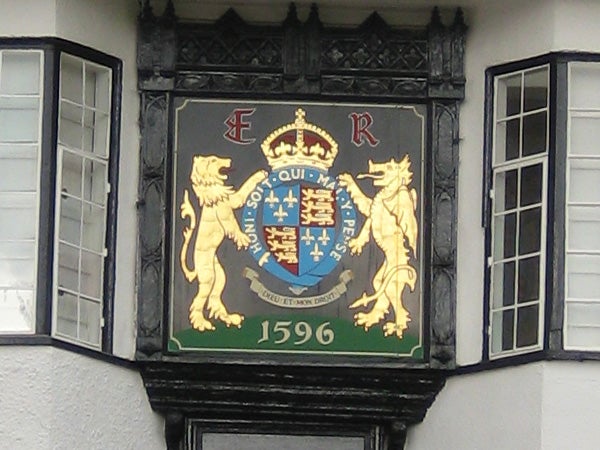 At the minimum setting of 80 ISO the image quality is superb, with no noise at all. 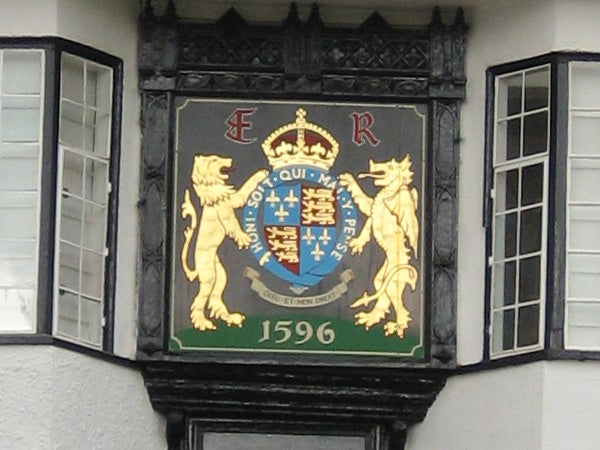 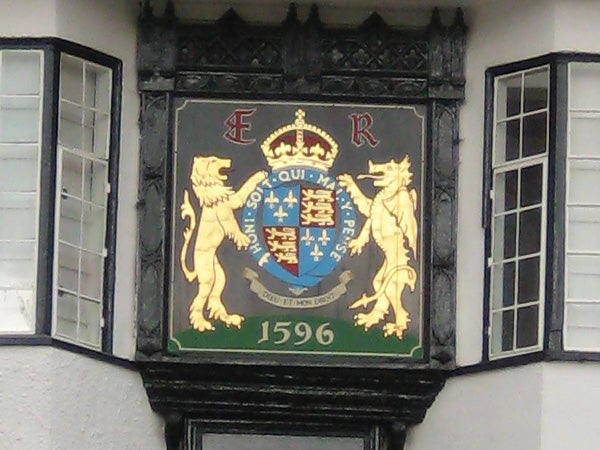 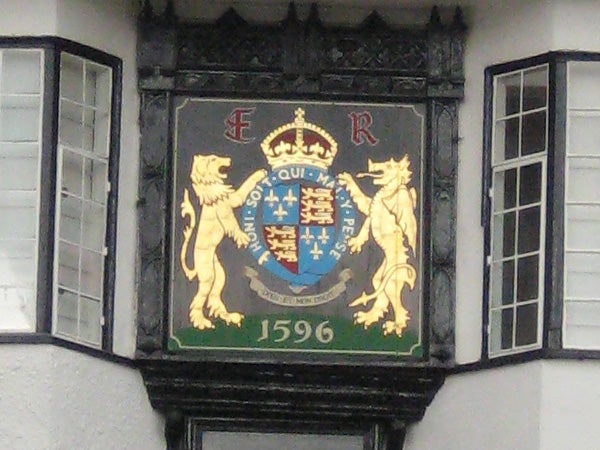 Up one stop to 400 ISO and now there is visible noise in the darker area of the image, but little colour distortion. 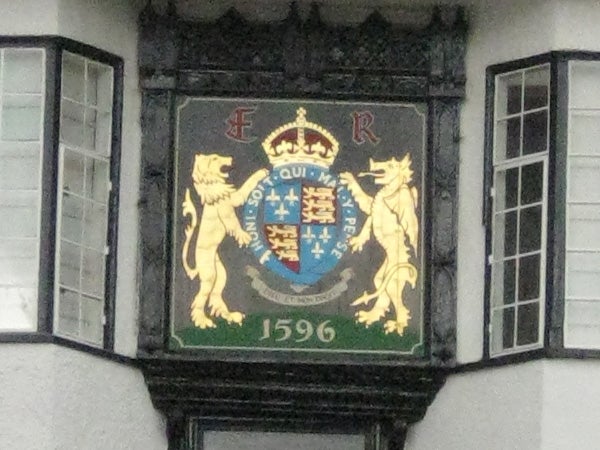 At 800 ISO there is more luminance noise, but very little chromatic noise, as is often the case with Canon cameras. 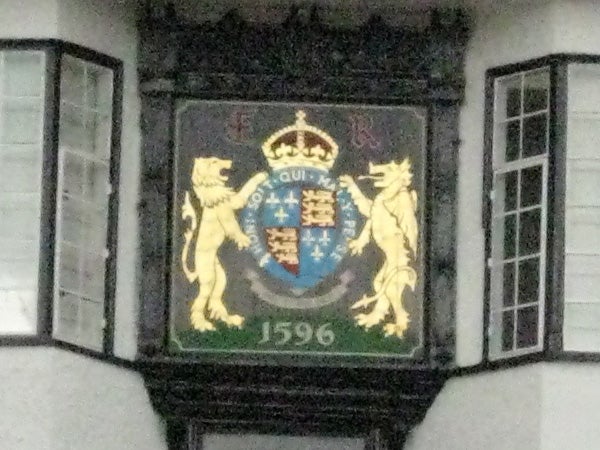 At the maximum 1600 ISO, a lot of detail has been sacrificed to keep the colour distortion to a minimum, probably too much to get a decent print out of it. 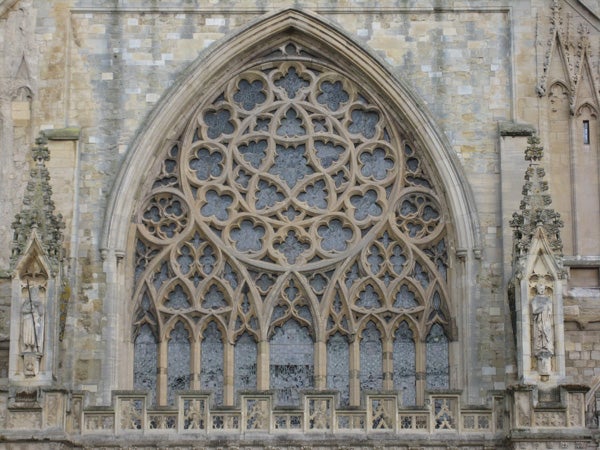 Here’s my standard detail test shot to compare with other similar cameras. See below for a full-res crop, or click to download a full-sized version. 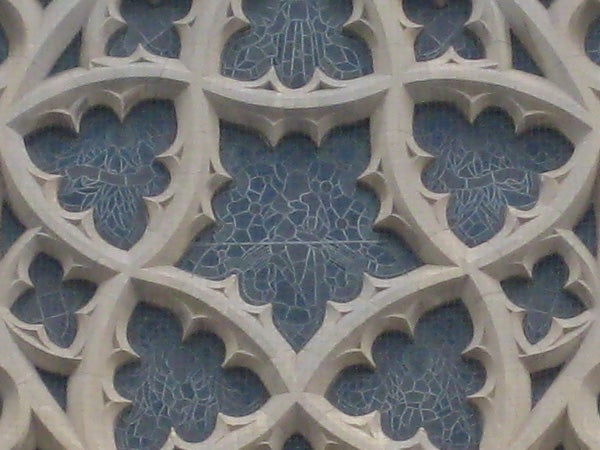 As you can see, the centre sharpness is excellent, but the seemingly random file compression has caused numerous artefacts and reduced the overall level of detail. 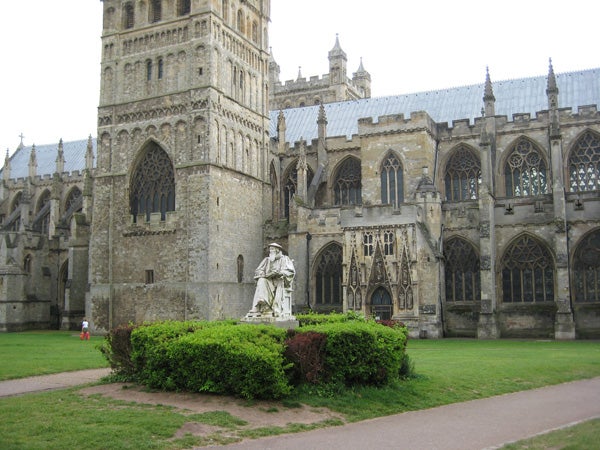 The IXUS 70 has a wide angle end equivalent to 35mm, about average for a compact 3x zoom. 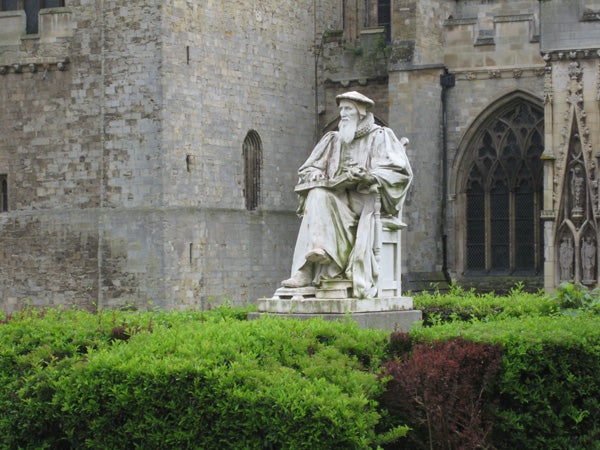 This was shot from the same position as the shot above. The telephoto end is equivalent to 105mm. 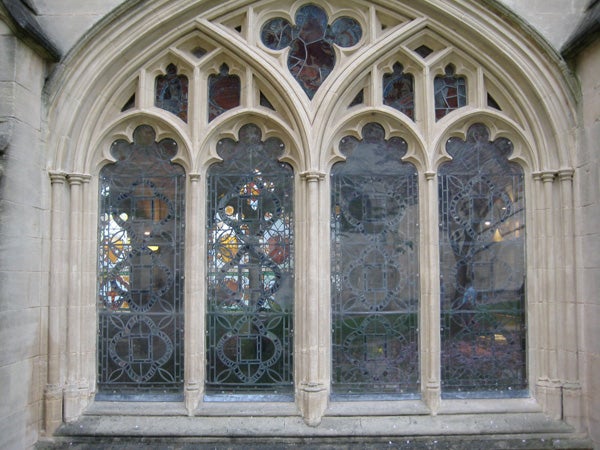 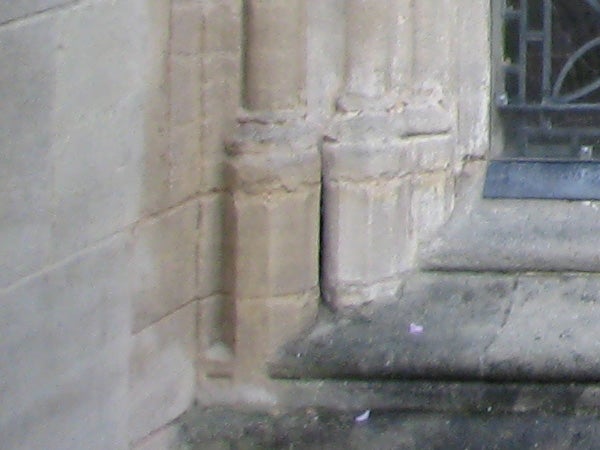 …but the corner sharpness could be a lot better. 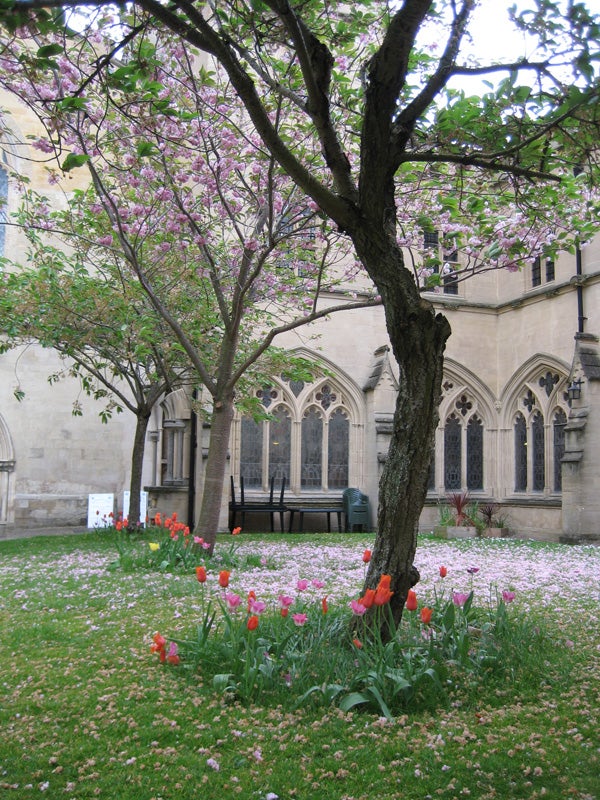 The exposure and colour reproduction are seldom less than perfect… 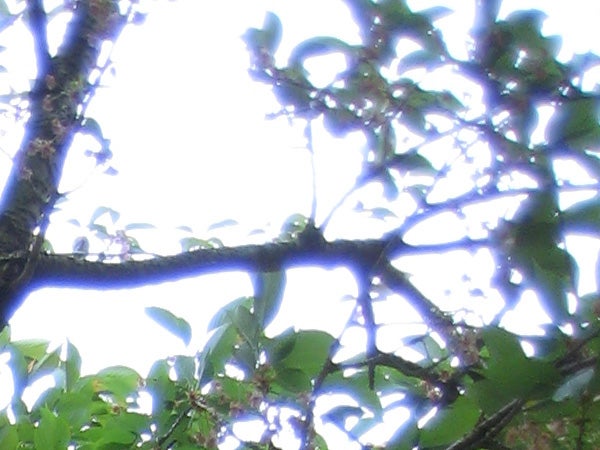 …however this crop from the top corner of the above image shows some rather bad purple fringing. 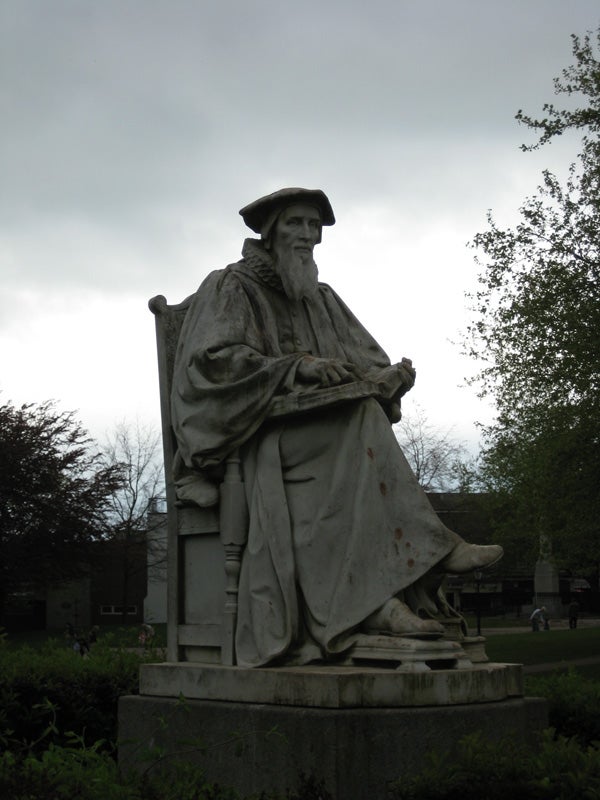 Shooting into the light, the IXUS 70’s excellent metering system has managed to retain both shadow and highlight detail.