The DVD camcorder has plenty of consumer appeal. If you don’t fancy the idea of editing your video, or just don’t have the time, it’s very convenient to simply slip the discs from your camcorder straight into your DVD player. Although the format used to command quite a premium, now that high definition models are pushing standard definition down, even fully featured DVD camcorders have fallen to keen prices. Canon’s DC50 comes in at below £400, yet could hardly be called a budget model. In fact, it’s the pinnacle of Canon’s standard definition DVD camcorder range.


The cornerstone of the DC50 is its large 1/2.7in CCD, which sports a sizeable 5.39-megapixels. This allows it to take still images at up to 2,592 x 1,944 pixels (an SD memory card slot is available for storage), although less of this resolution is harnessed for the video side of things. Canon only uses about four fifths of the CCD’s area for video, but theoretically this will still be good for the DC50’s low light capabilities. The greater the area picking up light, the greater the sensitivity. Continuing the premium specification, Canon integrates optical image stabilisation rather than the less effective electronic version, which can also have a negative impact on video resolution. 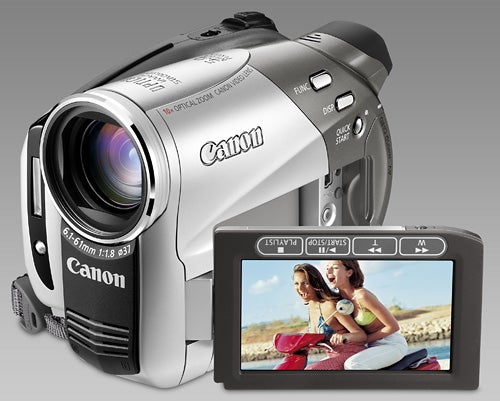 Being a model aimed at the point-and-shoot crowd, the DC50 lacks many features for the video enthusiast. An automatic lens cover keeps the optics safe when not in use, but there’s no accessory shoe, no microphone input and no headphone output. So you won’t be able to hook up any accessories or add-ons. There is a standard 37mm screw thread on the lens, however, so adding filters will be an option. Unlike Canon’s low-end camcorders, the DC50 only incorporates a 10x optical zoom, mostly due to the large CCD, which would require a longer lens for a more powerful zoom.


Shooting in auto mode, most of the manual options are unavailable. But switching to P mode using a switch on the top of the camcorder reveals a selection of settings via the joystick. Jogging this up and down scrolls through the possibilities, whilst left and right toggles functions. Manual focusing is available here, and works reasonably well but isn’t as easy to operate as a lens ring. The joystick also offers an Exposure control with 23 steps, when in Program Auto-Exposure mode.

For more manual controls, you will need to call up the Function menu, which lists categories down the left-hand side of the LCD with options ranging out along the bottom for the selected category. You can choose between P (Program Auto-Exposure), Tv (Shutter Priority), Av (Aperture Priority), and Scene modes. The latter provides a sub-menu with a healthy selection of presets, including Portrait, Landscape, Sports, Night, Snow, Beach, Sunset, Spotlight and Fireworks. In Tv mode you can vary the shutter speed from 1/8th to 1/2,000th, and in Av mode the aperture from F1.8 to F8.


Although you can’t configure shutter and aperture independently, setting either one manually changes the function of the joystick exposure control. For example, setting a manual aperture means the joystick exposure operates shutter speed, but in tandem with gain. So it’s not quite the same as having fully independent control of both shutter and aperture, and there is no direct control over video gain at all. 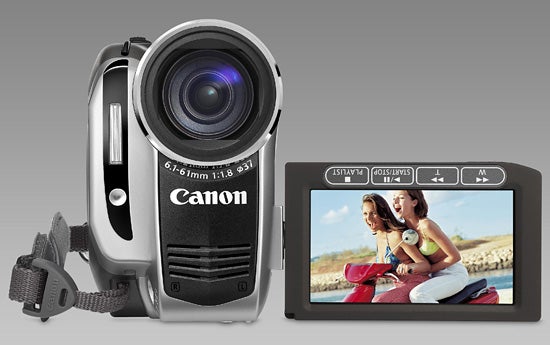 The DC50 offers a comprehensive set of white balance presets, alongside the usual automatic and manual options. These include Daylight, Shade, Cloudy, Tungsten, Fluorescent and Fluorescent H. The Function menu also provides access to Image Effects, which optimise the image processing in different ways. Vivid mode bumps up colour saturation, whilst Neutral has the opposite effect. Low Sharpening unsurprisingly reduces the amount of edge sharpening, and Soft Skin Detail smoothes skin tones. The Custom option lets you tweak image processing settings directly, including Colour Depth, Sharpness, Brightness and Contrast, although only three positions are available for each. Another useful option is the auto slow shutter, which drops the minimum to 1/25th in low light, rather than 1/50th.


As with all DVD camcorders, however, the convenience of the recording format has to be weighed against its limited storage. The 8cm DVD’s 1.4GB capacity is only enough for around 20 minutes of video at the top XP recording mode, which uses a data rate of 9Mbits/sec. You can fit 30 minutes in SP mode and a whole hour in LP, although the latter uses one third the data rate of XP, with concomitant loss of quality. However, the DC50 also supports dual-layer 8cm DVD-Rs, which ups the capacity to a slightly more respectable 36 minutes in XP mode. This is still rather meagre next to DV’s 60-minute tape capacity, and the hours you can now store on most hard disk-based models.

With its large CCD, the DC50 shoots great-looking video in broad daylight. Colours are faithful and not oversaturated, and there is little sign of grain. The great colour performance reduces only marginally in good artificial lighting, although there is much more obvious grain. The large CCD is clearly paying dividends here. The colour can be improved even more by setting the shutter manually to 1/25th, albeit with a slight increase in motion blur. Dropping light levels to the equivalent of candlelight not surprisingly loses quite a lot more colour information, and adds a lot more grain. But not as much as with Panasonic’s SDR-S150 or NV-GS230, which have three, much smaller CCDs. Again, using the lower shutter speed helps bring the colour back up, but doesn’t do much for the grain. 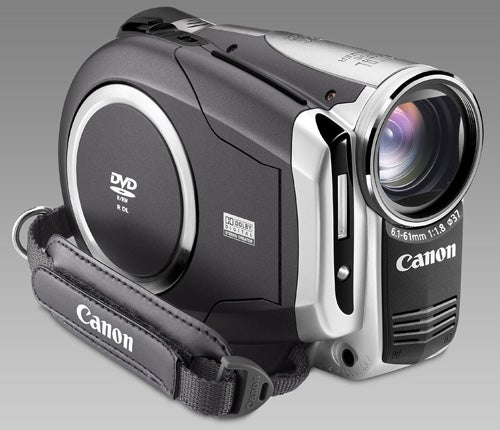 One of the benefits of DVD camcorders is ease of use. You can take the discs out of the DC50 and put them straight into your DVD player to watch. You can also stick them in your PC’s DVD drive and import the contents into your favourite video editing application. The DVD camcorder format is now widely supported and standardised, so most apps can handle it. The DC50 also includes a USB port if you want to access the video files from the camcorder’s own optical drive. A cleverly hidden AV minijack is available for a breakout cable offering composite video and RCA audio connections.


With its good image quality, adequate manual controls and high-resolution stills, the Canon DC50 has a lot to offer for the money – particularly now its price has dropped below £400. As standard DVD camcorders go, this is one of the best value models on the market. However, this also hinges on whether a DVD camcorder is the right format. It may be convenient to use, but you will have to carry a bagful of recording media with you.