The DVD camcorder used to command a premium. But now you can pick them up for a similarly low cost to DV models. The Canon DC201 is one of the most economical we’ve seen yet. Coming in at under £200, it’s virtually pocket money by camcorder standards. Only a few models from Samsung and Hitachi are currently cheaper. So what is the DC201 missing to allow its keen price?


Based around a single 1/6in CCD with 800,000 pixels, the DC201 is very much a budget specification. Such small CCDs invariably entail poor performance in low light. The tiny sensor does have one advantage, however. Because it’s so small, the lens is able to provide a large optical zoom. In the DC201’s case, it’s a whopping 30x – much larger than the usual 10-20x found on consumer camcorders. If you like video pixellated, you can add digital zoom for up to 800x, too, although we would always recommend you don’t bother. 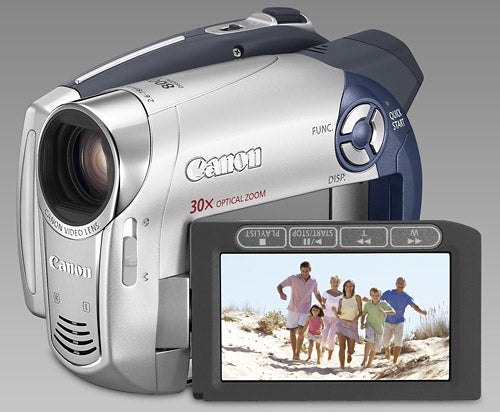 The DC201 records to 8cm DVD-R and RW, but also supports dual-layer media. Three quality levels are available – XP running at 9Mbits/sec, SP at 6Mbits/sec, and LP at 3Mbits/sec. In the top XP mode, a single-layer DVD will hold just 20 minutes, but a dual-layer one has almost twice the capacity (2.6GB versus 1.4GB), so will fit a more respectable 35 minutes. Nevertheless, this is still the format’s most major drawback now that hard disk-based and SD models (with a large enough memory card) can hold hours of footage.


As this is a cheap camcorder for consumers, the DC201 is not surprisingly low on enthusiast options. It has no accessory shoe, microphone input or headphone output. But hardly anyone would buy a camcorder in this class for these things anyway. It is at least small and comfortable to use, and a convenient switch on the side opens the built-in lens cover, rather than having a dangling cap.

Controlling the Canon’s settings involves one of three buttons arranged in a circle on the side, and the joystick on the back. The Function button calls up Canon’s configuration menu, which in Auto mode only provides the option to choose between the three quality settings. In P mode, the top entry toggles between Program Auto Exposure, Shutter Priority Auto Exposure, and Scene presets. The latter offers a pretty extensive range, including Portrait, Sports, Night, Snow, Beach, Sunset, Spotlight and Fireworks. 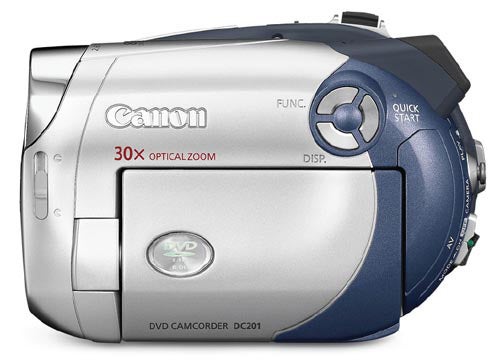 Four white balance options also become available in P mode – auto, manual, indoor and outdoor – and three image effects can be chosen. The Vivid effect boosts colour saturation even further, whilst the Neutral effect does the opposite. The Soft Skin Detail effect makes flesh tone colours look better. However, whilst some Canon camcorders also offer control over sharpening under this heading, the DC201 doesn’t. The final Function menu section offers two wipes and four digital effects. We wouldn’t recommend using them if you will be editing the footage on a computer, though.


Like other Canons, the DC201 has another set of options available when you only use the joystick, and this is where the highest level of manual controls resides. In Shutter Priority Auto Exposure mode, the shutter speed can be varied from 1/6th to 1/2000th of a second when operating as a camcorder, or ½ to 1/500th when snapping still images. Switching to Program Auto Exposure leaves the shutter under automatic control. In either mode, pressing the joystick button in calls up its own guide menu, wherein can be found manual focusing and Exposure, with the latter offering increments from -11 to +11. This only corresponds directly to aperture F-stops in Shutter Priority mode, although there is no indication of equivalent iris. In Program Auto Exposure mode, the exposure control varies both shutter and aperture at the same time, so equivalent iris varies with the amount of lighting.

With its tiny CCD, the DC201 was never going to lead the pack in terms of video quality, and it mostly met our expectations during testing. With adequate lighting, colours look vibrant, but as with most consumer camcorders in this price range the electronics deliberately over-saturate as that’s generally what users want. The picture is also quite grainy, even in bright sunlight. We’d rather have the colour performance, though, so this is not a huge worry.


The noise is more of an impediment as the illumination is reduced. In the equivalent of a living room lit by a couple of 100W tungsten bulbs, there is still plenty of colour, but the image looks quite fuzzy due to increased noise. Again, the everyday user is probably going to want colour over pin sharpness, but there are better performers in this price range, such as Panasonic’s NV-GS230. So the DC201 is acceptable in the all important shooting condition that is indoor family events, but hardly the best in its class. 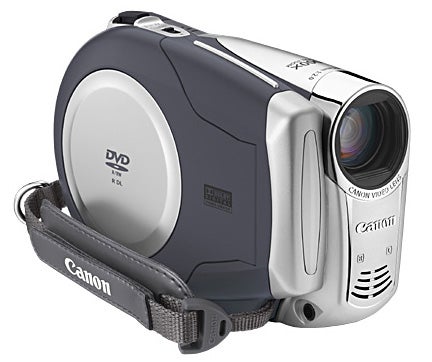 Dropping the light levels still further, however, makes the DC201’s picture essentially unusable. Although there is still a reasonable amount of colour information there – surprisingly more than the three-chip Panasonic NV-GS230 can muster – the grain rises to such an extent that most detail disappears. This blurriness won’t be acceptable to most consumers.


Being a DVD-based camcorder, the DC201’s footage can be edited in most mainstream apps – so long as you have a DVD drive. A slot-loading one won’t do either, as it won’t be compatible with 8cm optical discs. If not, you’re out of luck as there’s no integrated USB port for taking video directly from the camcorder. The Canon isn’t exactly brimming with other connectivity options, either. There’s a proprietary minijack for hooking up composite analogue video and RCA audio, and that’s it.


The Canon DC201 is not exactly an exciting camcorder. But it is extremely cheap, and as usual with Canon camcorders the range of manual settings is comprehensive and easy to use. Whilst our concerns with the practicality of the DVD recording format remain, if you’re willing to put up with carrying around a bag full of media then the DC201 makes for good value, if not particularly stunning image quality.