For those who continue to prefer the advantages of DSLRs over mirrorless – long battery life, good handling and a wide choice of native lenses – the Canon 90D is a fine choice. It’s a classic all-rounder that is very good in a number of different situations, making it the ideal camera for the enthusiast photographer. Upgraders coming from Canon’s entry-level models, or the 90D’s predecessor, the 80D, will find a lot to like here, especially if you’re not ready to consider making the leap to full-frame. All that said, if you’re not already tied into the Canon DSLR ecosystem, you may want to think about exploring the option of mirrorless instead.

The DSLR isn’t dead yet, at least according to Canon – three years on from the debut of its classic, mid-range Canon 80D, the company has built a 90D successor for ambitious amateur photographers.

To say the camera world has changed a little in those three years would be an understatement. Mirrorless cameras now trump DSLRs, both in terms of innovation and new bodies, so is there still a place in the world for the Canon 90D? 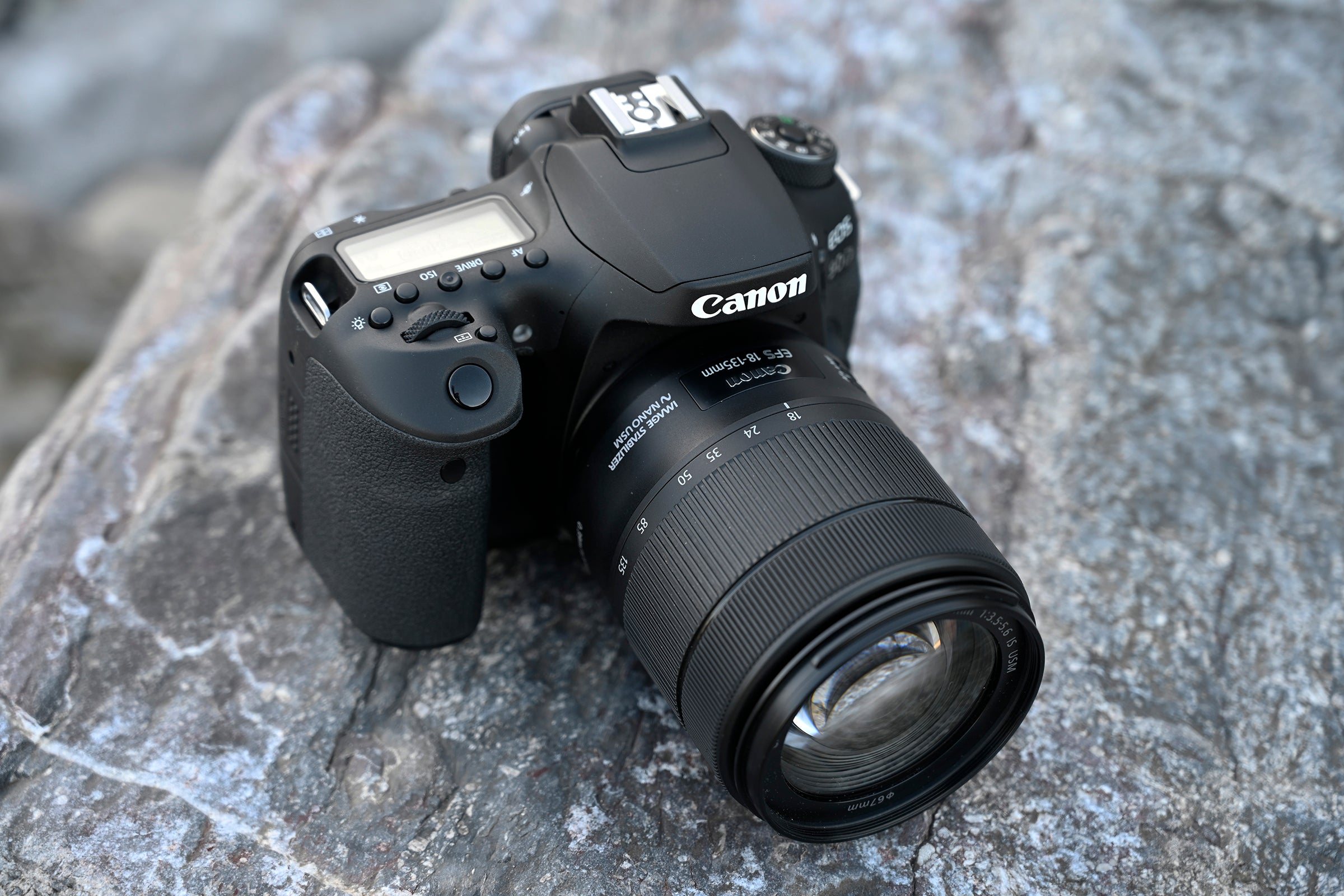 After using Canon’s latest, and perhaps last, mid-range DSLR for a week, the answer is yes, at least for traditionalists. Like before, it’s a good all-rounder, capable of serving the enthusiast photographer who likes to take lots of different kinds of shots, while not straying too far into the realms of eye-watering prices.

It features a high-resolution 32.5 megapixel APS-C CMOS sensor alongside a raft of enticing features such as 10fps shooting, a refined autofocus system with the promise of improved focus tracking and a 1,300-shot battery life.

If this is the DSLR’s final fling, then on paper at least, it’s a pretty impressive last throw of the dice.

Externally, the 90D is pretty similar to its predecessor, the 80D. Placing the two side by side, it’ll be hard to spot too big of a difference, as it’s internally where you find most of the big changes. It’s a smidgen lighter than its predecessor, but still weighs in at a fairly hefty 701g, which isn’t far off twice as much as the Canon M6 Mark II.

As well as the bump in resolution (the 80D had a 24-megapixel sensor), there’s also the latest Digic 8 processing engine, which brings a much-needed speed boost. With that you’ll now be able to shoot 4K (which unlike some of Canon’s other models is uncropped), as well as giving you 10fps shooting (compared to 7fps from the 80D). There’s also a boost to ISO capability, with the maximum native range now topping out at 25,600 (and being expandable to 51,200). 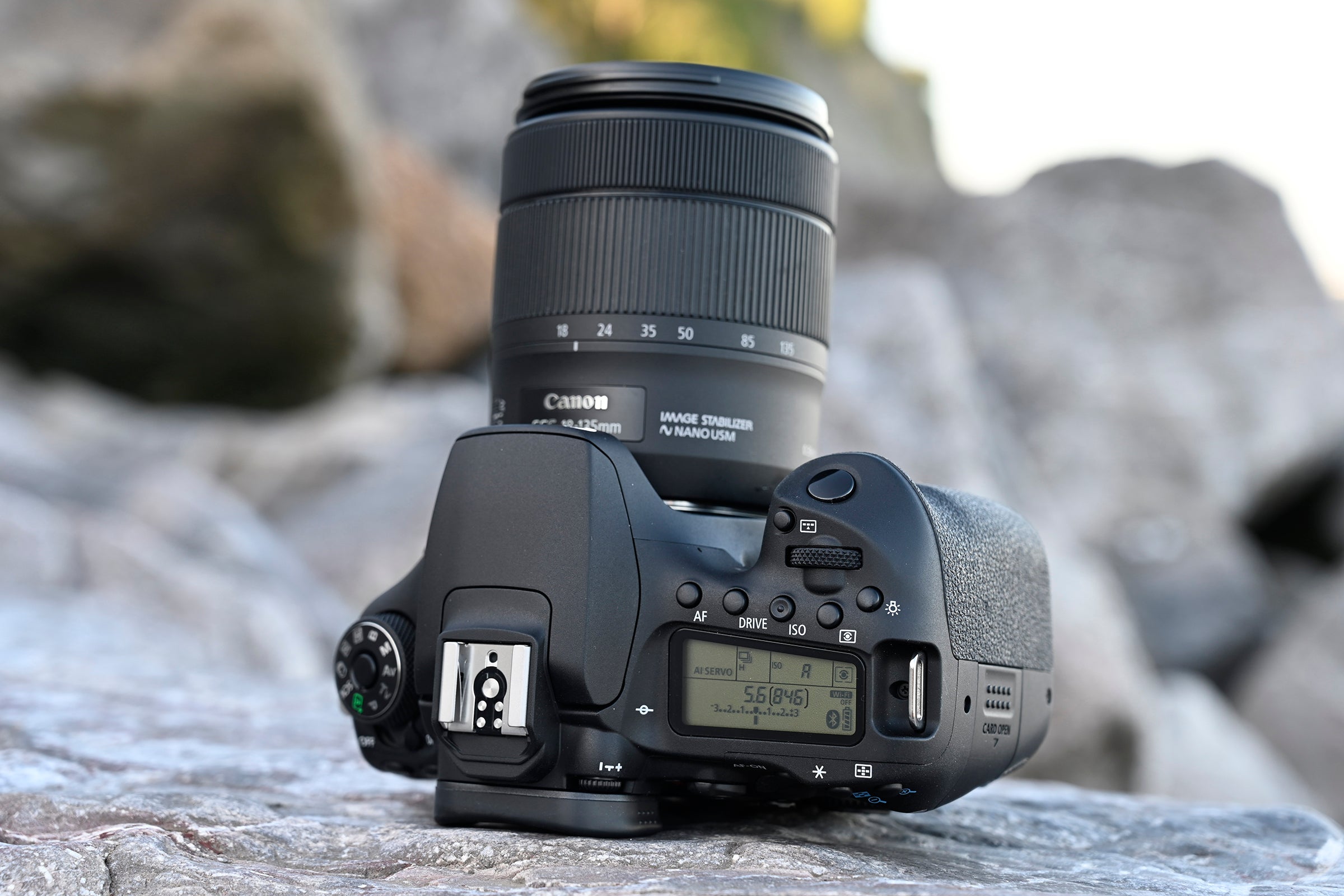 Focusing comes courtesy of the same 45-point cross-type AF system that was found in the 80D, but it is now joined by an improved metering sensor which gives you face detection, as well as Intelligent Tracking and Recognition Autofocus (iTR AF).

There’s no denying that by comparison to many mirrorless models in the market, a camera like the DSLR feels chunky and cumbersome. That could be a positive if you prefer your camera to have a bit of beef – the protruding grip feels pretty good in the hands.

The size of a camera like this also gives you plenty of breathing room for buttons and dials, with a raft of direct access controls found across the top and back of the 90D, as well as a handy top-plate LCD screen for displaying which key settings have been selected.

A fairly simplified mode dial houses the usual semi-automatic and manual modes, as well as holding a couple of spaces for a group of custom settings. There’s also fully automatic and scene modes for those who are perhaps a bit newer to photography.

Most of the buttons on the back of the 90D are found on the right hand side of the camera, which is useful for accessing most settings with just your thumb. A joystick has been introduced which enables super quick autofocus point selection, and is a welcome addition compared with the 80D. 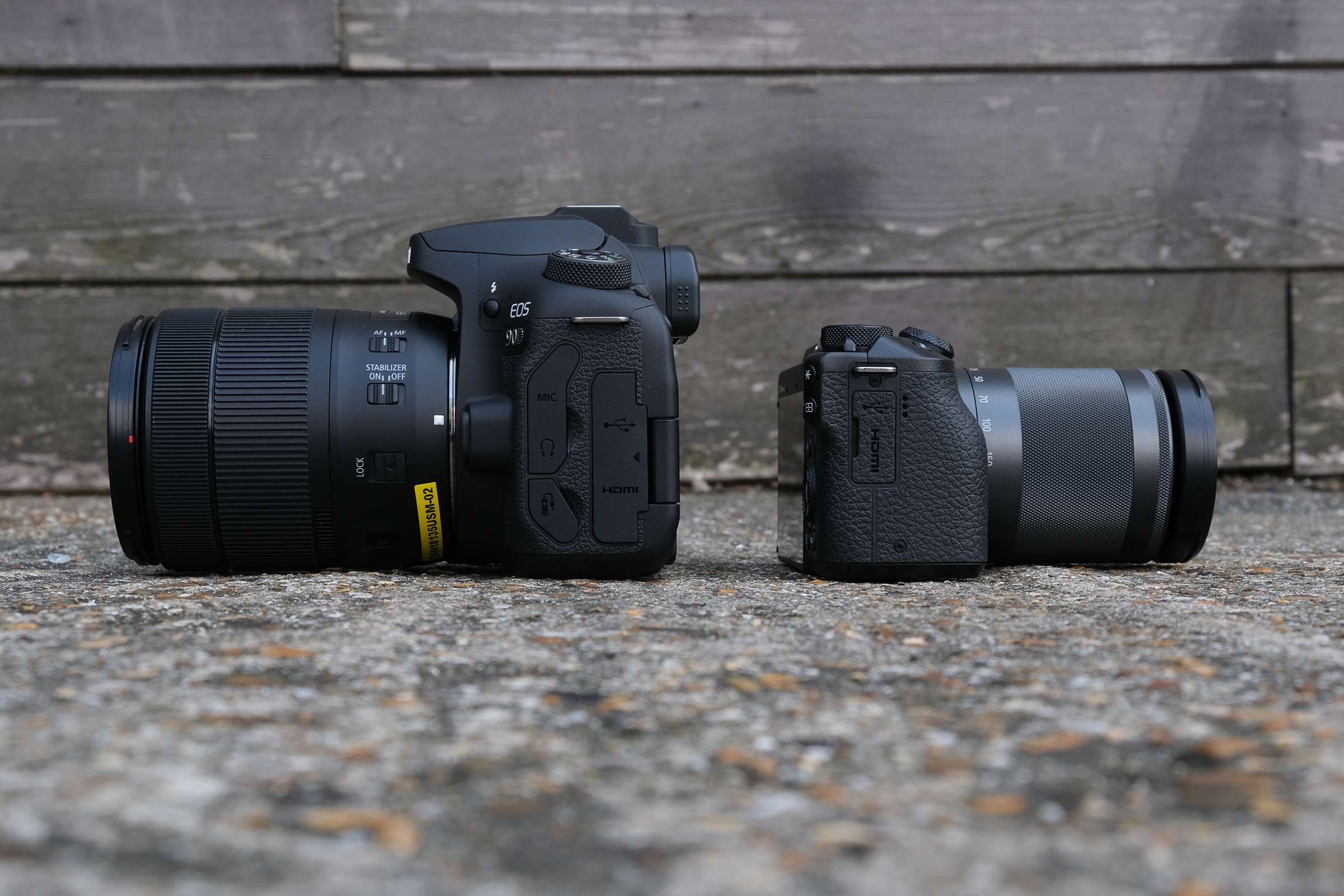 Here you can see the size difference between the Canon 90D (left) and its Canon M6 Mark II mirrorless brother (right).

Here we’ve got a bright and clear view, which helpfully shows 100% of the scene – so there’ll be no chance of something creeping into the edge. An optical viewfinder means you won’t be able to see changes to exposure as you make them, nor see images in playback, but if you simply prefer an optical device, then you’ll be at home here. 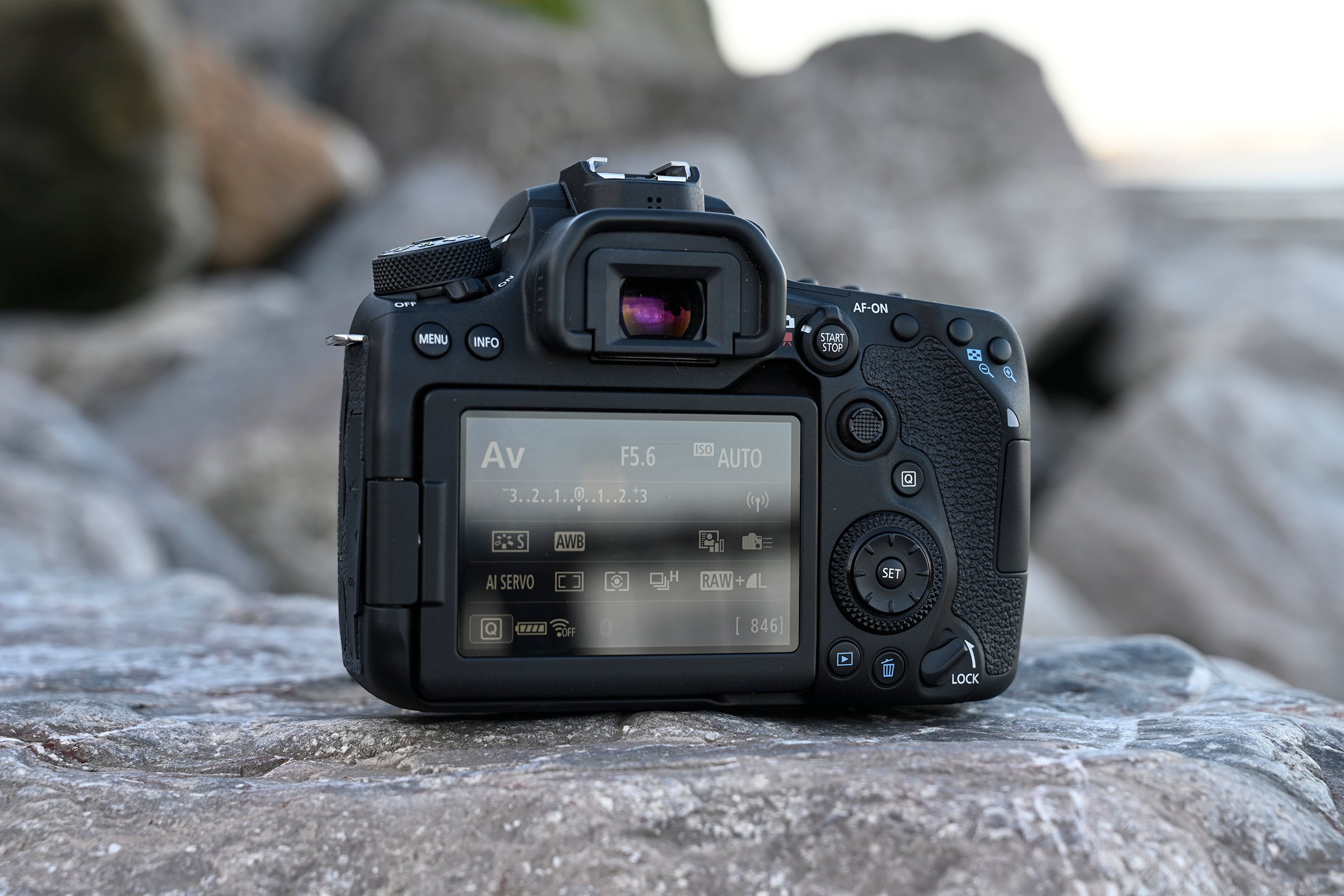 The screen is a fully-articulating touch-sensitive three-inch number. You can tap around both the quick menu and the main menu using the screen, as well as pinch to zoom in playback.

You can’t choose an AF point when working with the viewfinder, but you can if you switch to Live View or video recording. Being fully articulating, the screen can flip forward to face you for recording self-presented videos (or taking selfies), as well as fold inwards on itself to protect it from scratches.

There are 45 all cross-type autofocus points to choose from, but if you’re shooting through the viewfinder you’ll see that all of those points are clustered towards the centre of the frame – which is pretty typical for a DSLR. You can switch to Live View shooting and use the screen instead, where you can select areas right the way to the edge of the frame if you need to.

Since this is a DSLR, it uses a different kind of focusing depending on how you’re shooting (via the viewfinder or with the screen). Through the viewfinder, if you’re focusing on static objects, you’ll find that the 90D locks on pretty much every time and rapidly too – it takes a little longer in dark conditions, but otherwise we’re happy with the performance here. 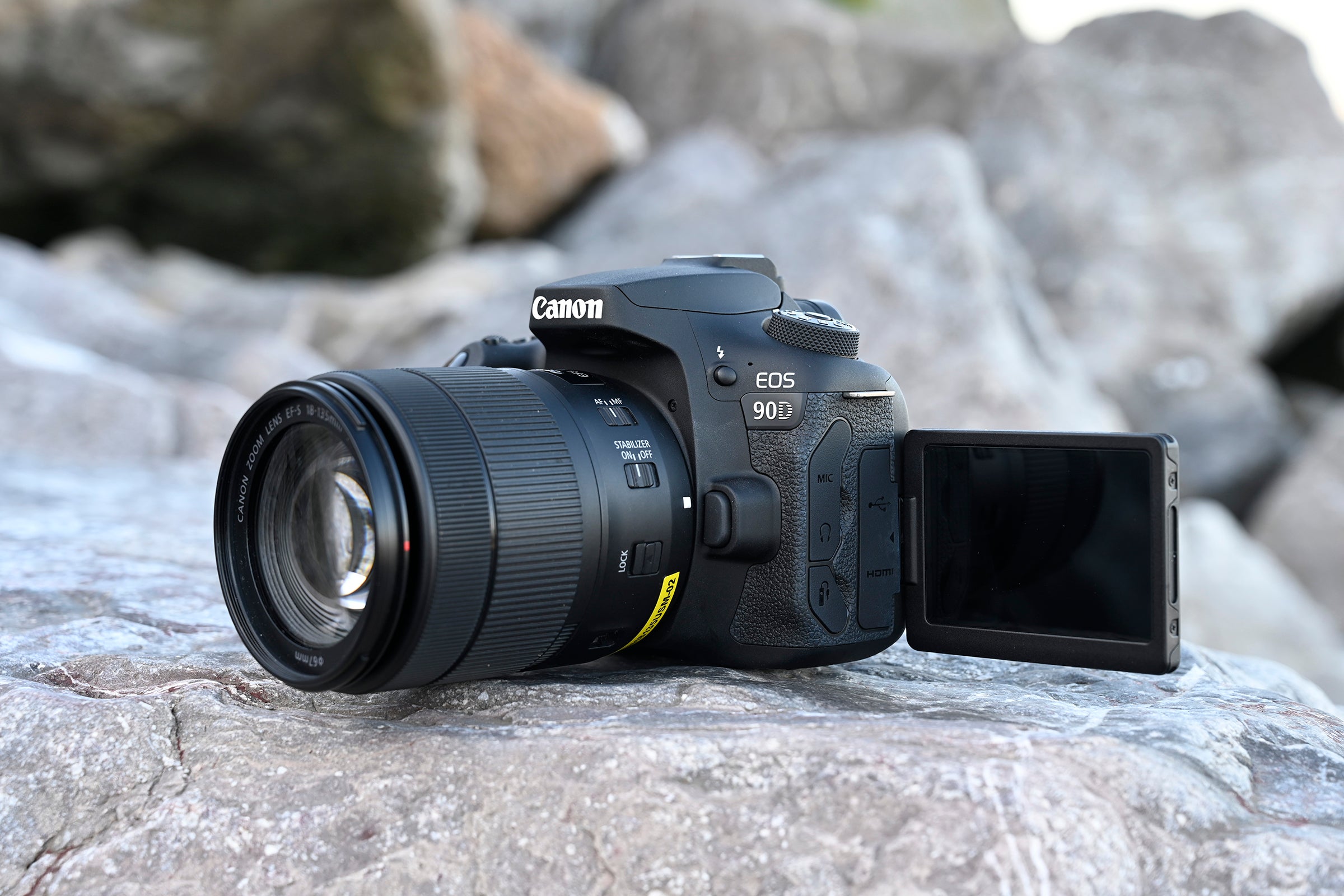 If you want to photograph a moving subject, it’s a little less reliable but still pretty good. If the subject is moving but in a predictable manner, then firing off a 10fps burst should see you get a reasonable return, meaning you get at least a couple of usable shots.

Switching to Live View means you can switch on Face Detection, which can be very useful for keeping track of subjects (well, those with a human face anyway), and here the 90D puts in a solid performance – again doing the best job if the subject is moving in a reasonably predictable fashion.

Battery life is one area where DSLRs still have mirrorless cameras well and truly bested. Here, there’s a CIPA rated battery offering 1300-shots. You shouldn’t have any worries about the battery running out on a day to day basis, but it would have been nice to have USB charging for when you’re on your travels.

Although using a DSLR is nowadays a very different experience to working with a mirrorless camera, one thing they have in common is the quality of final imagery.

A new, very high resolution sensor, combined with the latest processor and the introduction of a new metering system, equates to something which is capable of producing some fantastic images, which we have been very impressed by.

Colours are bright and punchy directly from the camera, without going too overboard and being overly vivid.

In good light, detail is fantastic, with that 32 megapixel sensor really being useful for capturing fine detail. The metering system does a great job of creating balanced exposures for the most part. As is usual with Canon, all-purpose metering is weighted towards the active AF point, so if you’re photographing something particularly high in contrast it can be thrown off a little, at which point you might need to change to spot-metering, but on the whole it does a good job.

The EOS 90D is compatible with a huge range of EF and EF-S lenses – this was shot with a Sigma branded 10-20mm lens.

There is a downside to having such a high resolution sensor – especially when it is found inside a body without optical image stabilisation. Any slight movements can present themselves as blur, so you’ll need to factor that in if your goal is superior sharpness by shooting at faster shutter speeds, or placing the 90D on a tripod could be necessary.

Tracking focus does a great job of keeping up with the subject, particularly when it’s following a reasonably predictable pattern.

When it comes to low light, our lab tests show that the 90D performs very well up to around ISO 3200. ISO 6400 is where you start to see noise and a loss of detail start to present itself, but images remain usable up to around A4 size all the way up to ISO 12800. Speeds higher than that are useful for situations where light is extremely dark, but ISO 25600 is best avoided unless absolutely necessary (and you only want to share at small sizes).

ISO 12800 is the top speed we’d recommend shooting at if you’re trying to keep the best possible image quality.

Naturally, for best results you’ll want to shoot in Raw somewhere between ISO 100 and ISO 400, which will five you super-clean, noise-free shots.

If you’re a videographer then there’s every chance you might not consider the 90D, but it actually makes a decent option, particularly if you already have some Canon EF/EF-S lenses. Uncropped 4K produces high-quality footage and is a welcome addition to this model, while headphone and microphone sockets also give it a competitive edge in this field.

Should I buy the Canon EOS 90D?

Despite all the exciting developments that have been made over the past few years, there is still a huge market for DSLR cameras. The fact is, if you have already invested in a DSLR system in the past, upgrading to a new camera is a straightforward possibility, while switching systems entirely is a much more difficult task.

The 90D is a great camera to upgrade from if you’re already used to using one of Canon’s entry-level models, such as the 200D, or 800D. It also makes for a decent upgrade if you’ve been using the 80D, with new functions such as an improved autofocus system and the addition of 4K video – so there’s a lot to like here.

That said, if you don’t already have some existing optics, choosing to buy a DSLR over a mirrorless is a more difficult decision. There will always be some who prefer optical viewfinders, and the larger, bulkier handling of a DSLR, and if you fall into that category it’s easy to recommend the 90D.