There are better mirrorless cameras available at this price – for example, Canon's own EOS M50 or the Fujifilm X-T100. But for beginners who fancy learning their trade on a DSLR, with all of the handling and battery life benefits this brings, the 250D is a solid choice. It's not quite as much of a bargain as the Nikon D3500, but you do get 4K video, a great range of lenses and some very decent performance in most shooting situations. Vloggers will also very much appreciate that vari-angle touchscreen too.

Coming a couple of years after the 200D made its debut, the 250D sits almost at the bottom of Canon’s DSLR line-up, designed to capture the imagination of beginner photographers.

Many of the same specifications have been carried over from its older model, but one interesting new addition is 4K video recording – a first for a DSLR at this price. 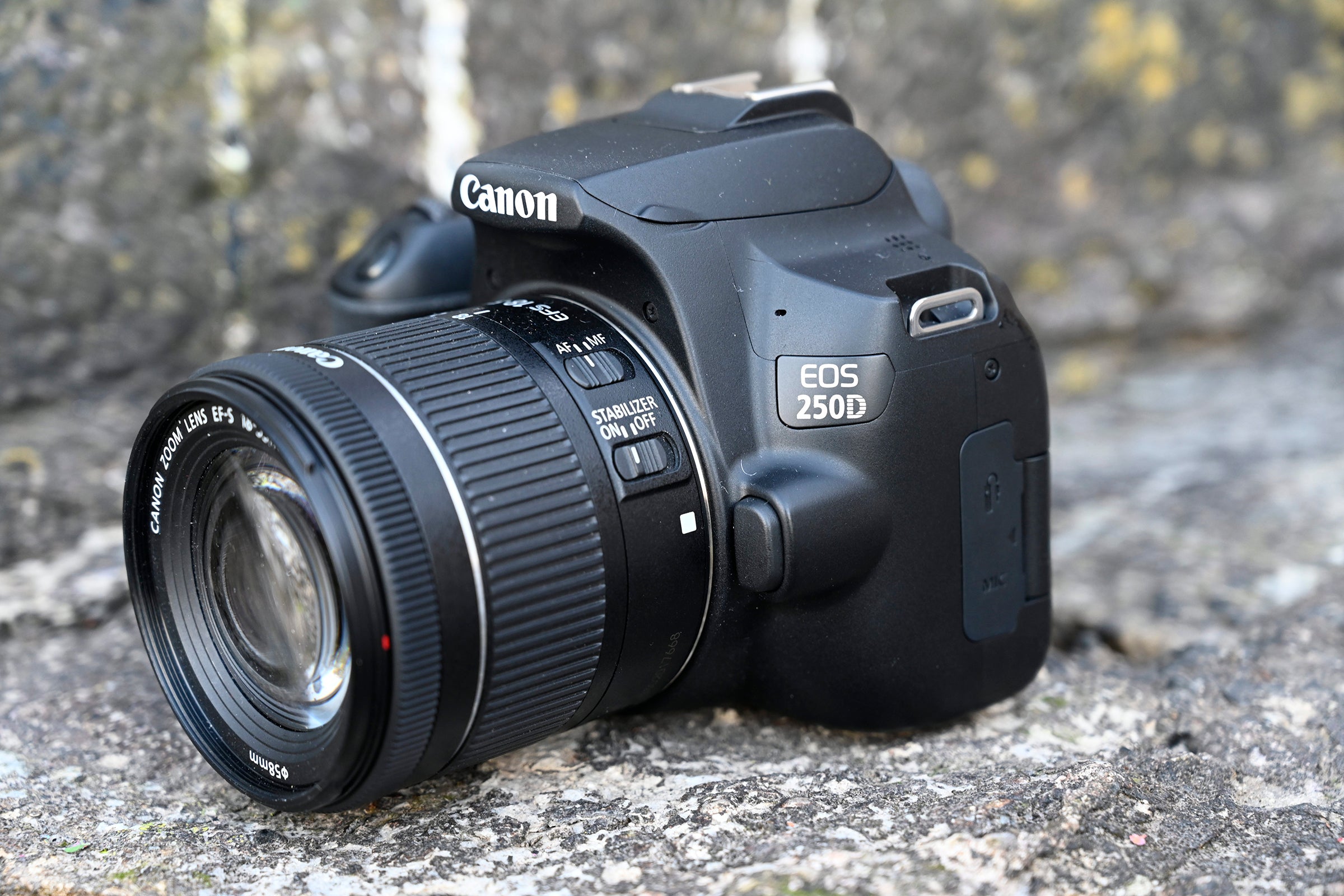 With mirrorless models from Sony and Fujifilm providing strong competition to DSLRs, the Canon 250D has to work hard to earn its place. It’s got the accolade of being the world’s smallest and lightest DSLR to feature an articulating screen – which is helpful when competing with smaller mirrorless models.

Even more crucial, though, is price – available for under £600 including a kit lens, it’s very competitively priced for those who are new to photography and don’t necessarily have the budget to spend in the thousands.

Not a whole lot has changed, body-wise, from the 200D. Here with the 250D we have a charmingly petite DSLR – it’s so small, you might consider using it as a travel camera, especially when using it with smaller zoom lenses and primes.

Despite its size, the grip is chunky enough to give it good purchase, with the vast majority of the buttons and dials on the right hand side, making it suitable for one-handed operation. 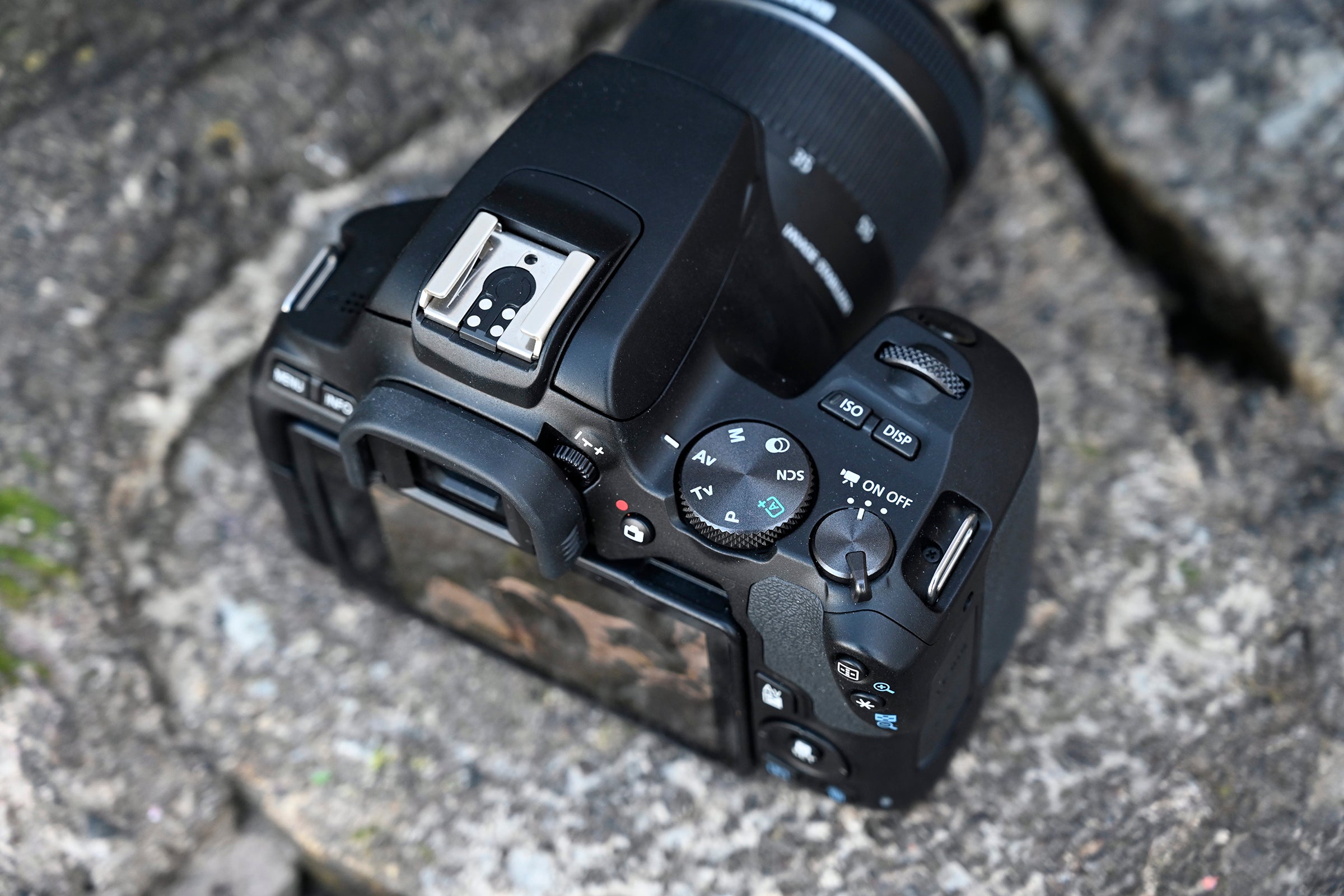 As it’s mainly aimed at beginners, there aren’t a huge number of dials and buttons on the 250D, but you do get direct access to things like ISO and exposure compensation.

There aren’t a huge number of direct access buttons, but you will find controls for ISO and exposure compensation. For most of your other settings, the Q button will be your best friend – here you’ll find other settings, such as white balance, metering, drive mode and so on.

If you want to adjust aperture or shutter speed, depending on which shooting mode you’re using, you can use the dial on the top of the grip.

Beginners will appreciate the Guided User Interface too, which explains how a number of settings work, right on the screen. Helpful hints will pop up when you switch between shooting modes and change key settings, such as ISO or white balance.

In other words, it’s a great way to learn the ins and outs of basic photography, even if you’ve never used anything more advanced than your phone before.

The Canon EOS 250D’s 3-inch screen is a vari-angle, touch-sensitive affair. At 1,040k-dots, it’s not the highest resolution on the market, but that’s only to be expected at this price. It displays a clear and bright enough display of your images in playback – or if you’re using it for Live View. 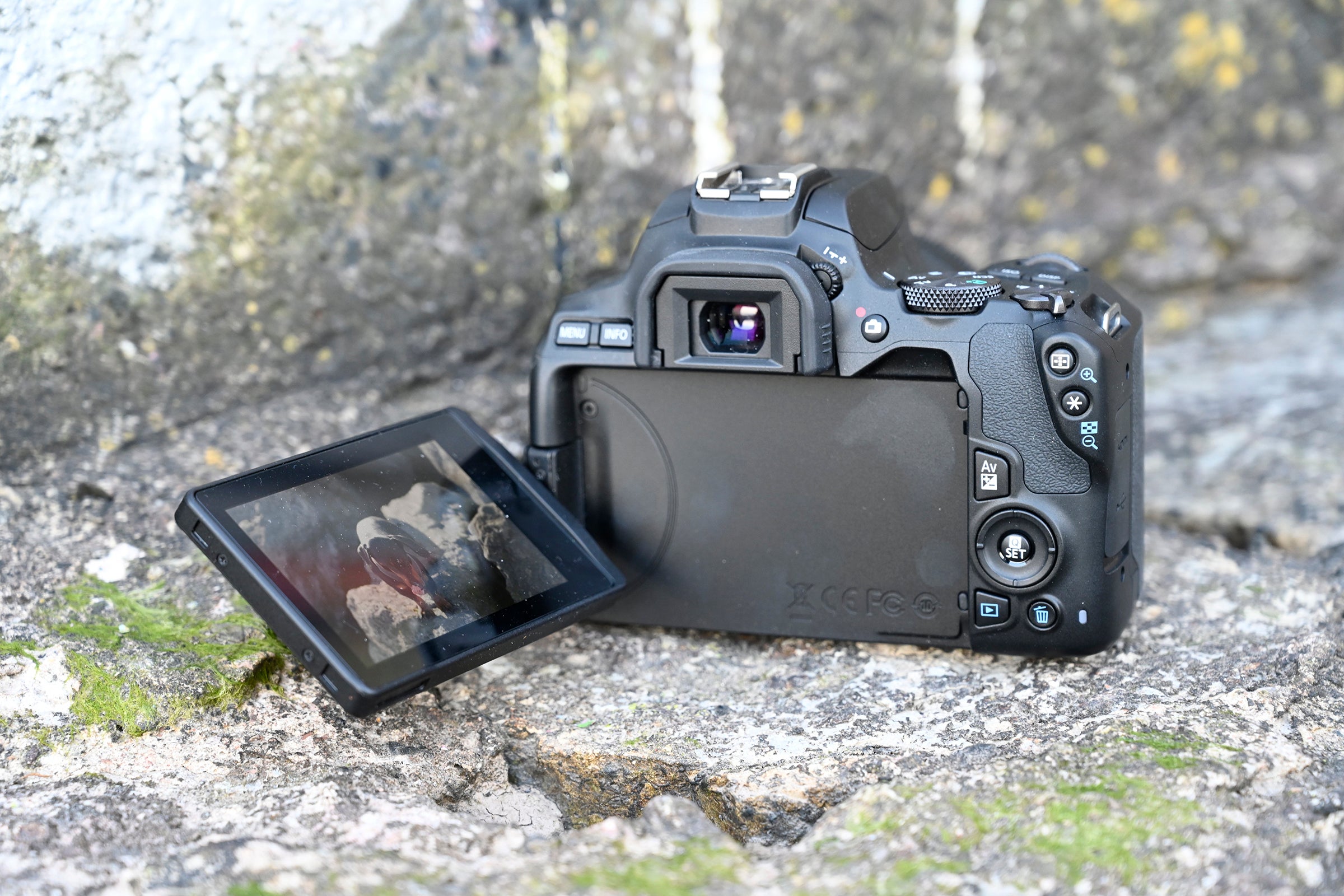 The 250D’s vari-angle screen lets you both compose from awkward angles and protect the screen by folding it inwards.

There are several benefits to a screen being vari-angle. It’s particularly useful when shooting from a variety of awkward angles, including facing all the way to the front, which vloggers will appreciate. It can also fold inwards to protect the screen when it’s not in use, which is another advantage.

As the Canon 250D is a DSLR, it has an optical rather than electronic viewfinder, which gives you a 95% view of the scene. That means that there’s potential for artefacts to creep into the outer edges of the frame without you noticing during composition.

Compared to most modern electronic viewfinders, the 250D’s feels a little cramped and small, but if you’re not used to using anything superior you may not notice the difference.

By modern standards, the 250D is using a bit of an outdated autofocusing system if you shoot in a traditional way. The 9-point AF system (when using the viewfinder) gives you a limited number of focus points to choose from, which can be tricky if your subject doesn’t happen to fall underneath them. 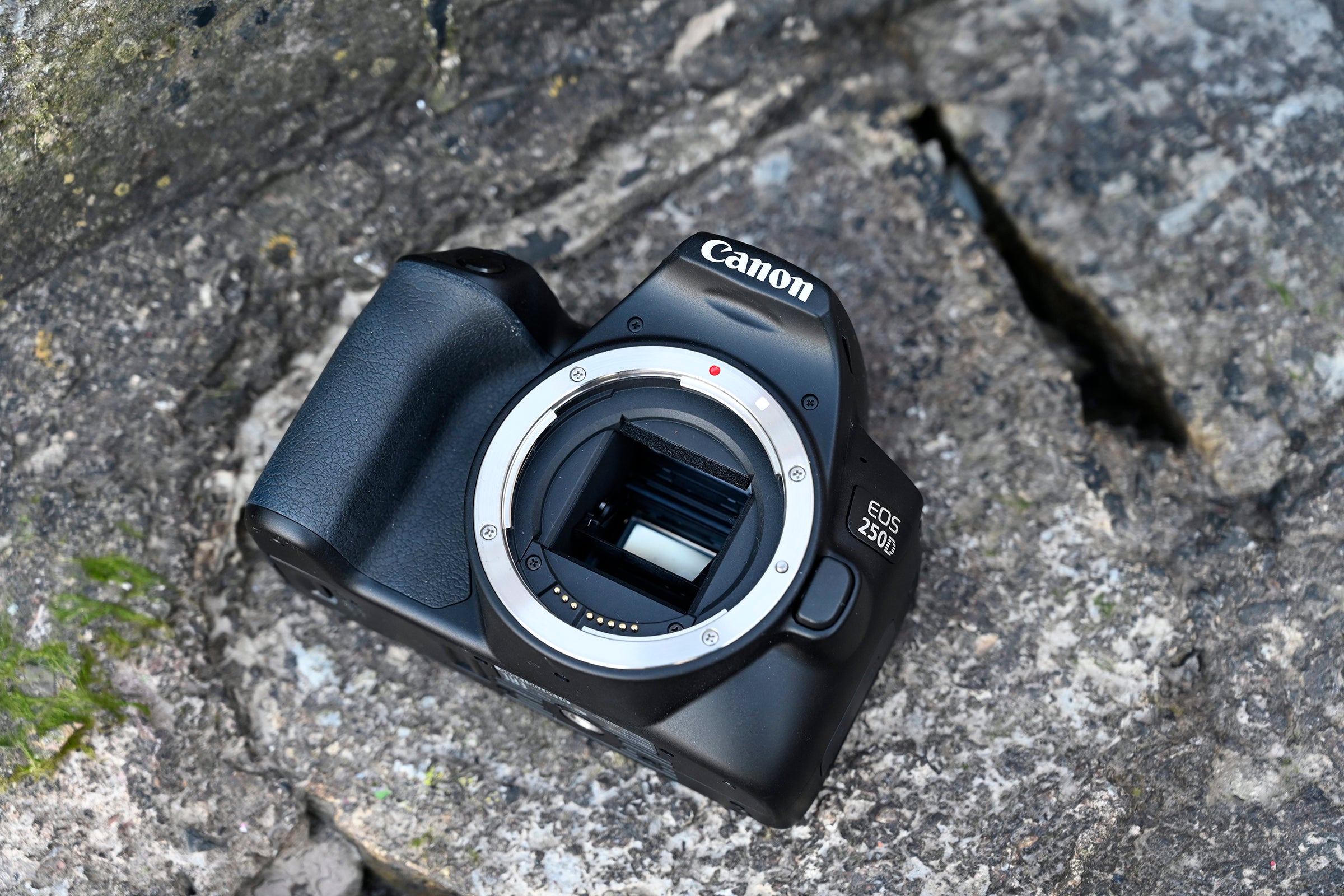 The 250D’s most powerful features, including Dual Pixel CMOS AF, are only available when shooting via the screen rather than the optical viewfinder.

You can switch to Live View focusing (using the screen), where you get 3,975 points to choose from. If you’ve got something lying on the outer edge of your frame, it’s a viable option – especially since you can use the touch-sensitive screen to quickly choose the most appropriate point.

Shooting via the screen means you also use Dual Pixel CMOS AF, which is something that’s been found on a number of Canon DSLRs for several years now and performs pretty well – it also comes in handy when recording video.

The camera offers 5fps shooting, so it’s fair to say that if you shoot a lot of moving subjects, the 250D is probably not quite the right camera for you. If you’re photographing something moving which follows a reasonably predictable pattern, you might get the odd useable shot, probably more through luck than judgement.

Considering the 250D appears to be using the same sensor as its predecessor, it’s no surprise that there isn’t a particularly noticeable upgrade in terms of image quality.

Fortunately, image quality is pretty good in a variety of different situations. Colours are bright and punchy directly from the camera, while Canon’s all-purpose metering system generally gets exposures nicely balanced on most occasions. 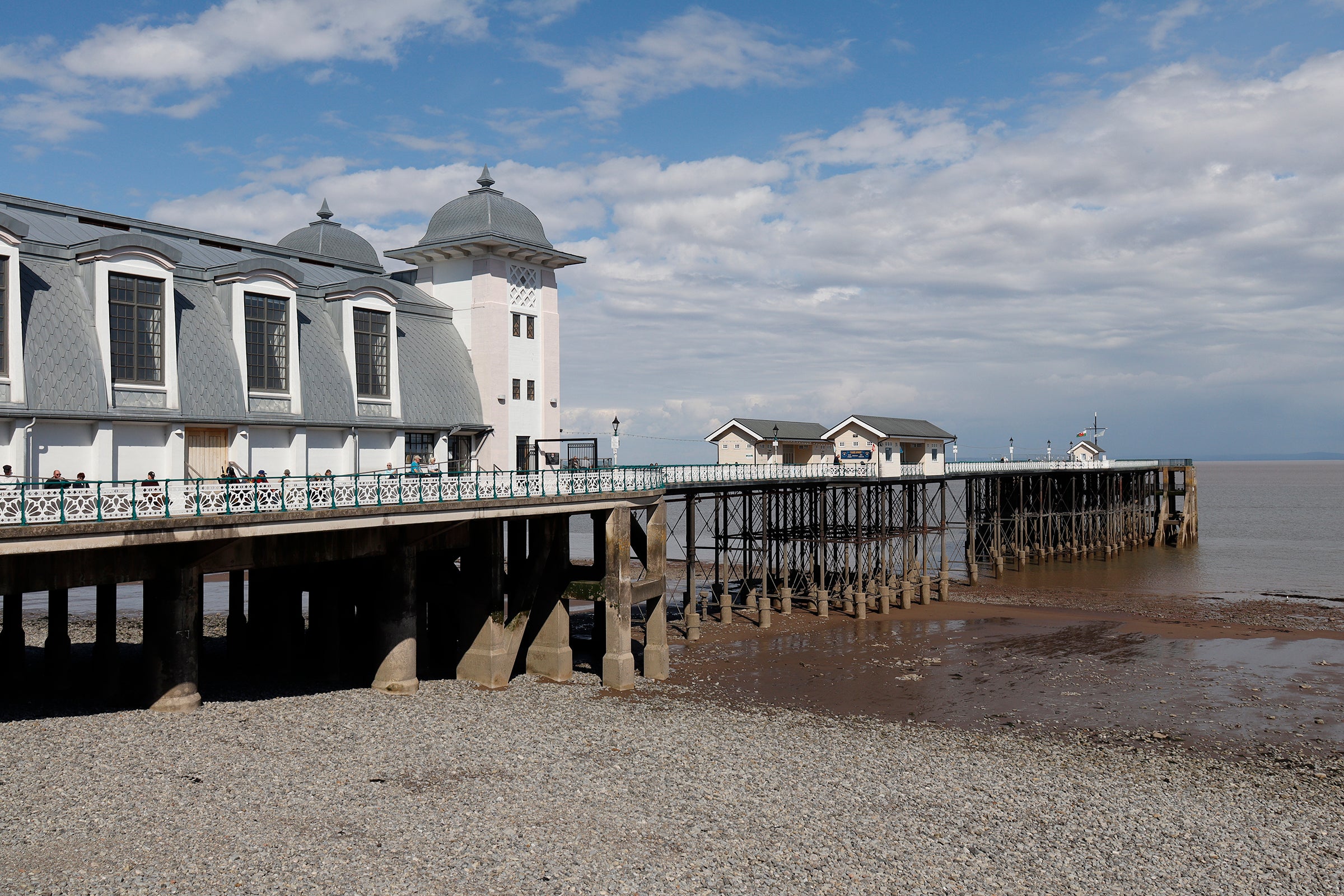 The 250D”s metering system produces nicely balanced exposures in most situations, including challenging combinations of light and dark

Auto white balance puts in a good performance, accurately judging colours even in mixed or artificial lighting conditions. Noise is kept well under control throughout the native ISO range, but you can see some loss of detail at the higher end of the scale, such as ISO 6400 – keeping to below this if at all possible is highly recommended.

As standard, the EOS 250D ships with an 18-55mm f/4-5.6 IS STM kit lens. This isn’t the best lens in the world by any stretch, but it’s a good starter if you’re brand new to the world of DSLR photography. 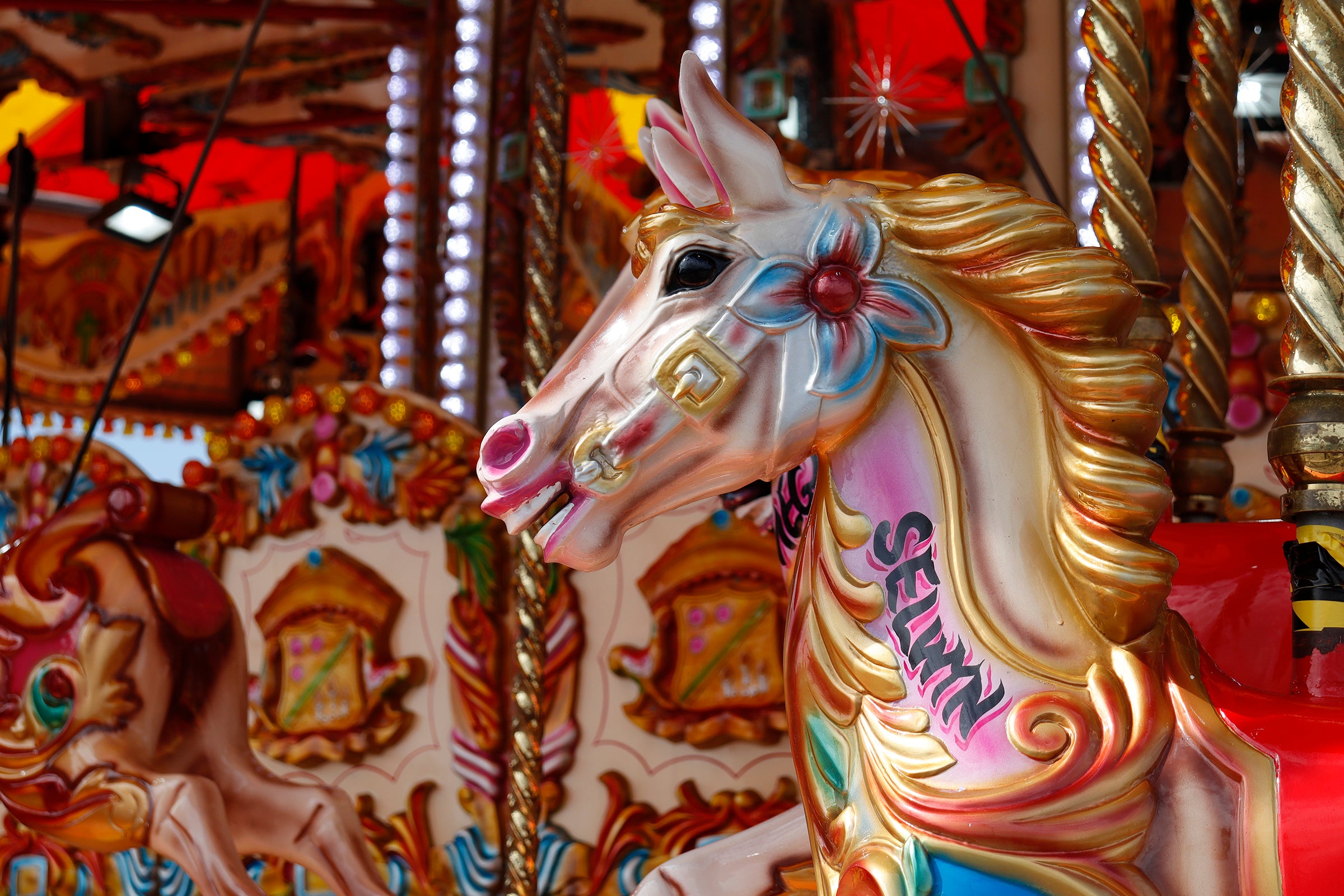 Colours are bold and punchy without venturing into the unrealistic oversaturation that many smartphones produce by default.

You’ll probably outgrow it as time moves on, but it’s useful to have as a general walk around lens that you can use for a variety of different subjects. It produces images that are reasonably sharp and distortion-free, but there are certainly more capable optics in the EF and EF-S lens line-up.

What really sets the 250D apart from the 200D is the inclusion of 4K video. Because of the low price and the form factor, the camera may well appeal to budding videographers and certainly vloggers. 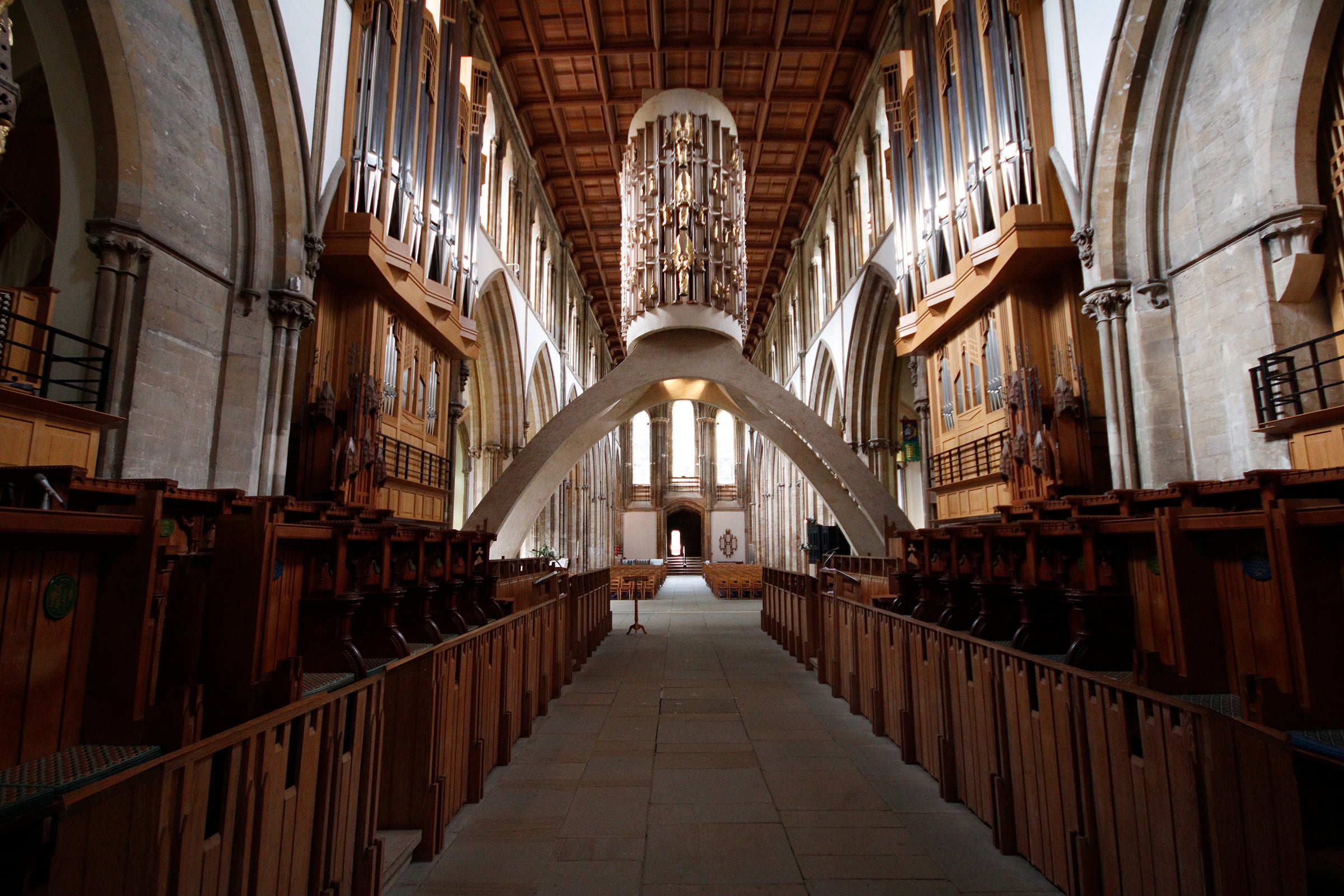 Noise is well controlled in dingy conditions up to ISO 6400, though it’s best not to venture beyond that.

There is a slight disappointment here though. While 4K video is nicely captured on the whole, it is cropped, making capturing anything a relatively wide-angle very difficult.

Shooting in Full HD gets around this problem, but if you’re going to use that, there’s no need to opt for the newer camera. Similarly, another problem here is that Dual Pixel CMOS AF only works in Full HD, rather than 4K.

In a world seemingly obsessed with mirrorless cameras, it’s difficult for DSLRs to still feel relevant. A lot of the tech included in them is, by its very nature, old fashioned. Still, the DSLR is still seen by many as the “go to” when stepping up from a smartphone or a compact, mainly thanks to their handling and simplicity.

There are – for now at least – some advantages to sticking with DSLRs. At the entry-level, you tend to get more for your money. There’s also plus points such as a long battery life and a huge range of lenses and accessories to choose from when you want to expand your system, at a range of prices that match lots of different budgets. 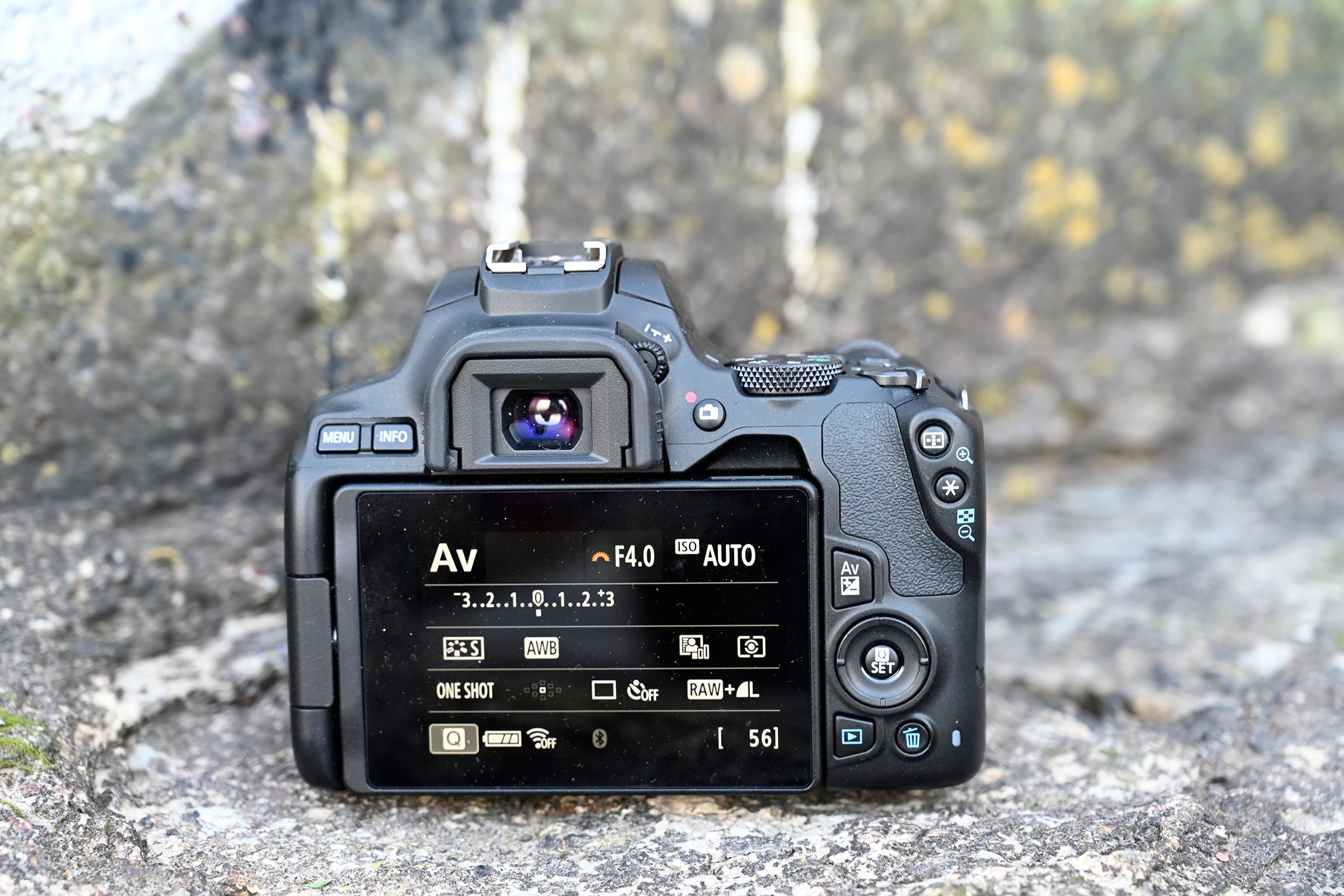 The 250D doesn’t represent a huge upgrade from the 200D. It brings 4K, but with limitations, such as the crop factor and the lack of Dual Pixel CMOS AF. For that reason, unless you’re particularly wedded to the idea of 4K video, you could save yourself some cash and go for the older model.

On the whole, the 250D is a capable performer, which is well-suited to beginners or those looking to start getting serious about photography. A good range of buttons and dials, plus a fully articulating screen, make it comfortable to use, with relatively few drawbacks – especially for the price. 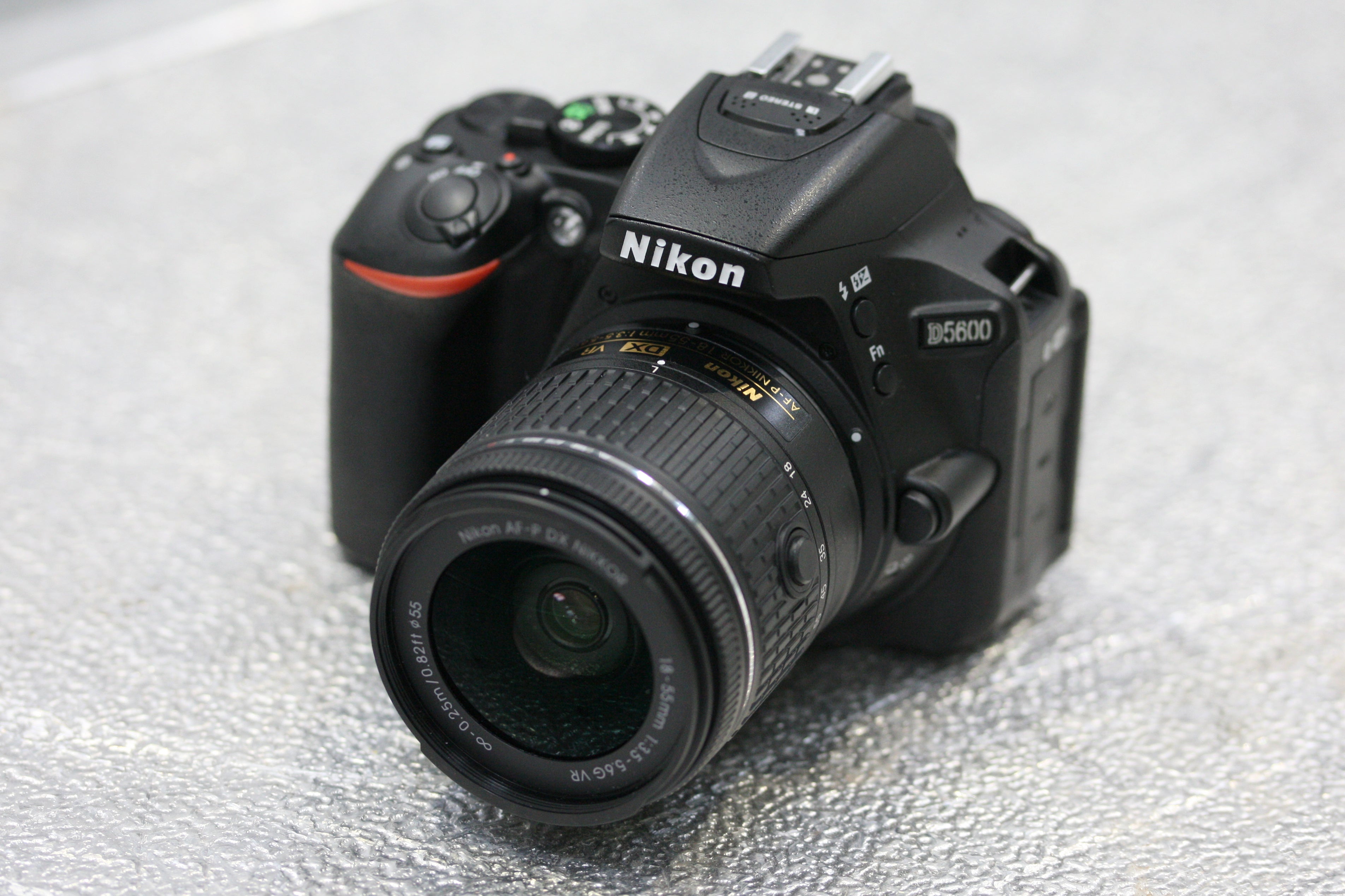 A slightly older model, but nevertheless a good option for first-time buyers, the Nikon D5600 comes up with a range of interesting and useful functions. There’s a 3.2-inch articulating screen, a 24-megapixel sensor and a 39-point AF system, giving you more flexibility than the 250D. Video is limited to Full HD, though. 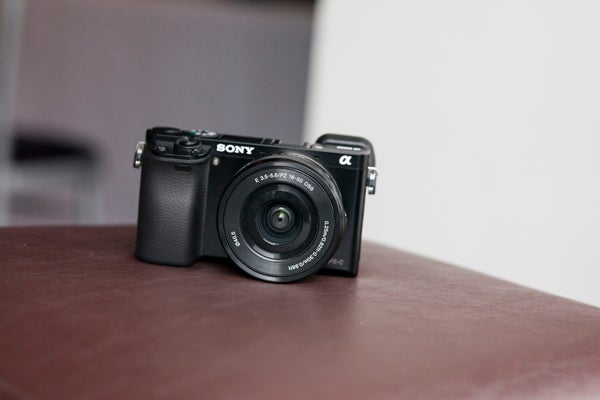 If you’re not necessarily wedded to the idea of a DSLR, the Sony A6000 remains a perennial favourite for those looking for their first interchangeable lens camera. It’s a few years old now, but it still includes some great features, including a 24-megapixel sensor, a Hybrid AF tracking system and a small and light body design.