The Candy Smart Pro CSO 16105DC3 is a 10kg machine with plenty of ‘better than basic’ functions and an A+++ energy rating that keeps running costs in check. Its build quality is more basic and there’s a few quirks to work around, but the respectable wash performance and range of programmes comes as a pleasant surprise at this price point.

While a quick wash option has been a staple programme for the last few years, it’s usually only a one-size-fits-all cycle, prizing speed over all other considerations. Where the Candy Smart Pro CSO 16105DC3 differs is that it’s packed with quick wash programmes – there’s seven of them – all tailored to different needs. As well as quick wash cotton, there’s quick wash synthetics for example. Not only does this make the model ideal for families, but there’s also more besides, such as a generous 10kg capacity and three levels of stain removal to ensure that the grubbiest gear doesn’t receive the same kind of light scrubbing that slightly soiled items would.

While it does not completely function over form, there’s little in the way of style details on the Smart Pro. A silver-effect finish around the door, scooped handle and an LED display are about as flashy as it gets. Given the price, this isn’t entirely unexpected, just a little out of keeping with its more hi-tech features.

It’s pretty simple to load, the porthole being large enough to fill the 10kg drum, but unfortunately, the door does clash quite badly with the detergent drawer. I found that the door could actually swing open with enough momentum to yank the detergent drawer completely out – the clip to hold it in not being particularly effective. The drawer itself is also thin plastic and prone to being broken.

The drum felt very roomy, however – loaded with almost 3kg of washing, there was plenty of space left. 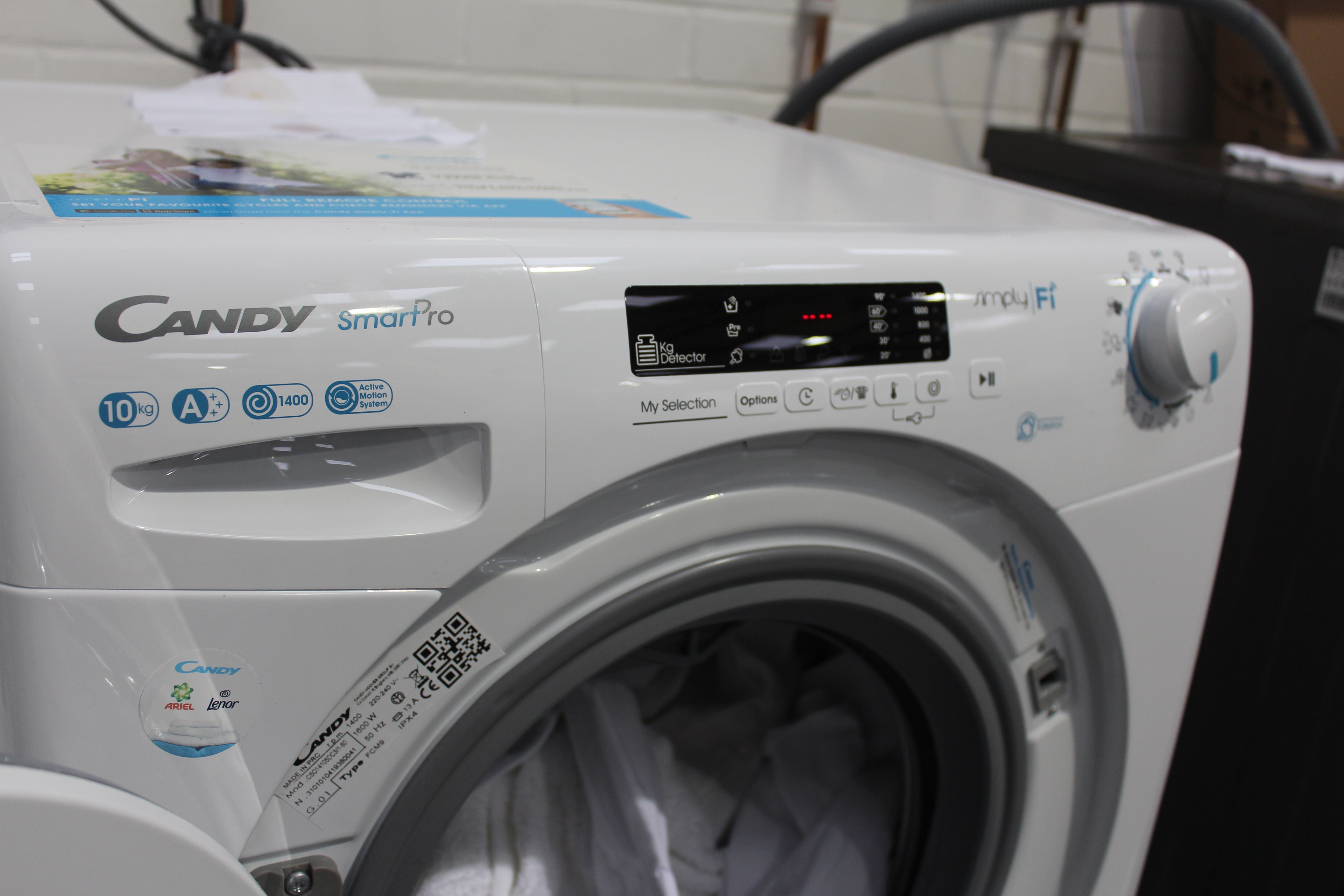 Named programmes are always the best option on a washing machine, both for convenience and ease of use. Sadly, the control panel on the Smart Pro is symbol heavy – meaning that you might be able to remember which is cotton and which the mixed load but if you’re washing anything out of the ordinary, you’ll need the instructions, which has a useful programme table in it, to hand, or spend time scrolling through the dial one by one waiting for the display to tell you what it is. 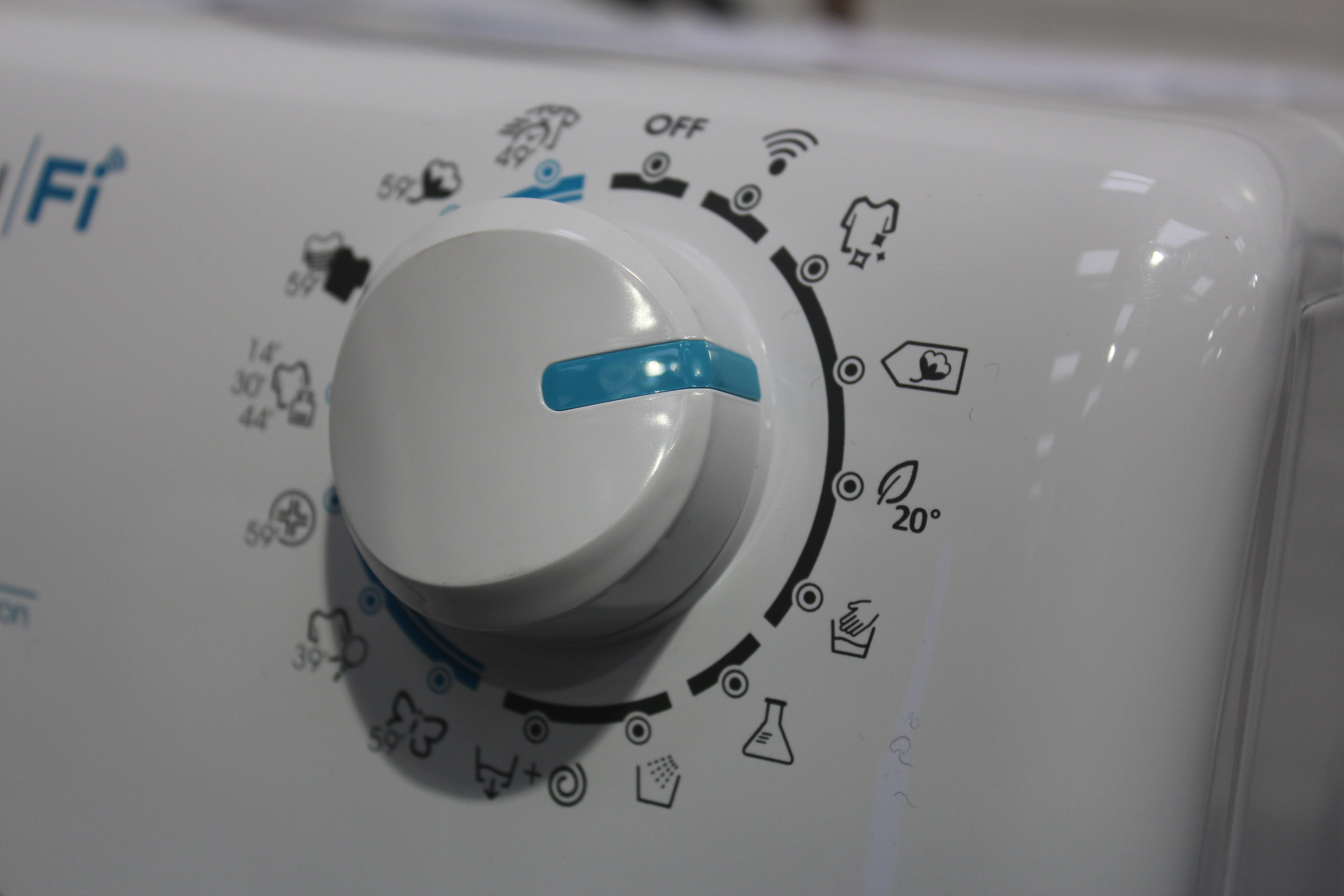 There’s actually a good selection of 16 programmes, which can be toggled in temperature and spin speed within set parameters using a pair of buttons below the display screen and includes handy settings such as Hygiene Plus (which maintains a high temperature to sanitise the load). Beyond programmes, the options offer good washing flexibility – as well as pre-wash, you’ll find a 24-hour delay timer and steam (to make ironing easier). Its KG detector can also be used to weigh the laundry and then adjust the cycle’s length and water and energy required. Fortunately, you don’t have to just rely on the controls to find your ideal wash – the Smart Pro connects to the Simply Fi Wi-Fi app, which can work out what programme you need based on the type of fabric and level of soiling, before starting the programme remotely. 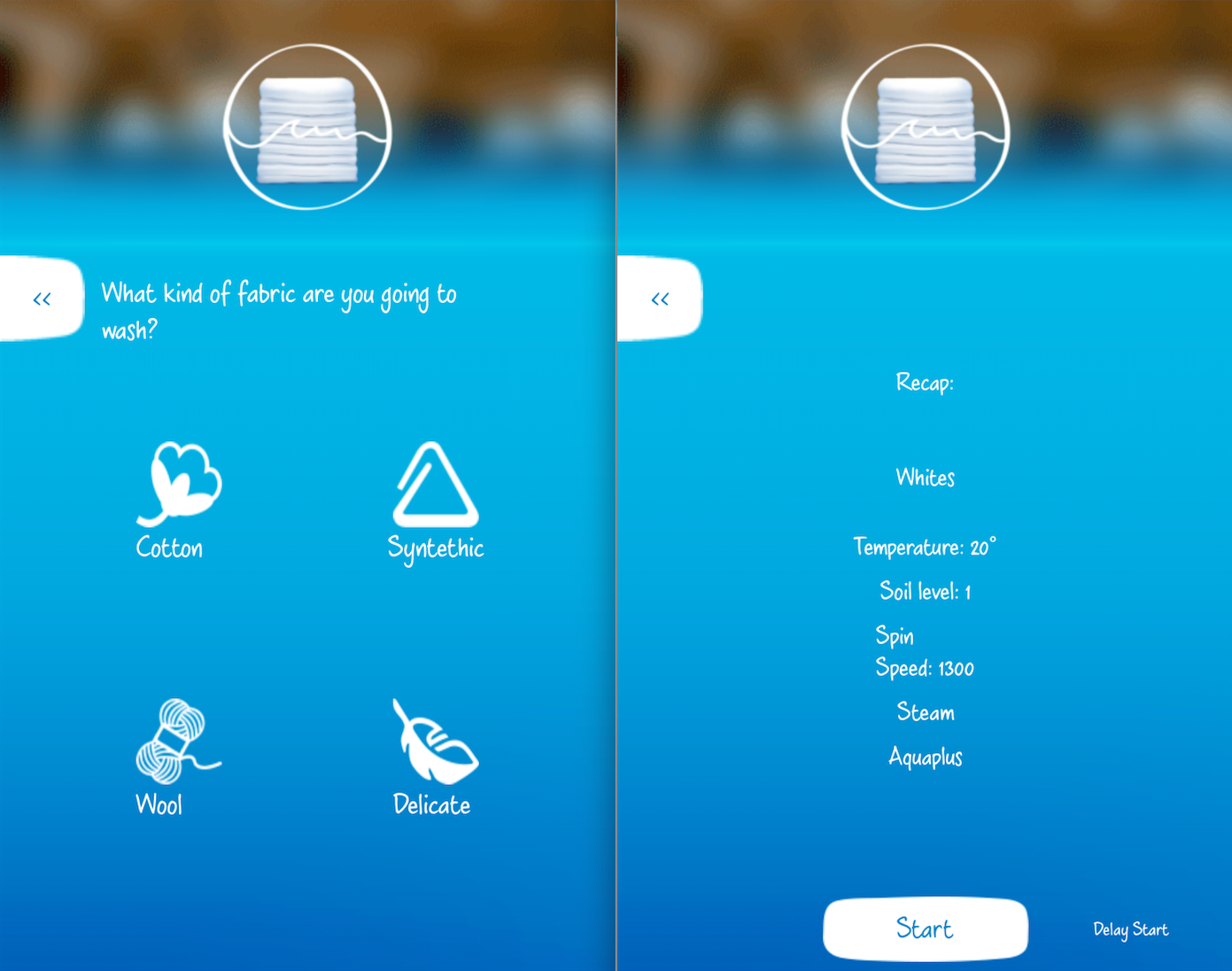 The app itself is fairly simple compared to more expensive machines but could potentially be useful if you need to add extra programmes or have an issue with the machine’s functions.

Like most machines, the Smart Pro also has a countdown timer but it’s worse than useless as it’s inaccurate. On both washes, the estimated time left was far longer than stated on the screen – for example, the synthetics wash took 30 minutes longer than shown after five minutes into the cycle, and a 10-minute spin on the cotton wash took twice as long. Even taking into account adjustment by the KG detector, this makes the feature more of a loose guideline than something useful.

As it’s rated A+++, with an A-rated spin, the Candy Smart Pro should be efficient on most cycles. I started with a cotton wash at 30ºC to test this. This cycle used 0.58kWh of power and a minimal 26.6l of water. While the maximum spin speed was only 1400rpm, it still managed to wring out an impressive amount of water – only 1.02kg remained, which equals 37.23% of the load’s original weight.

The stain strip featured, left to right – red wine, vegetable oil, tomato sauce, orange juice and gravy, all left to dry into the fabric. At the end of the cycle, the red wine remained, though fainter, and there was a trace of ketchup in the fabric. 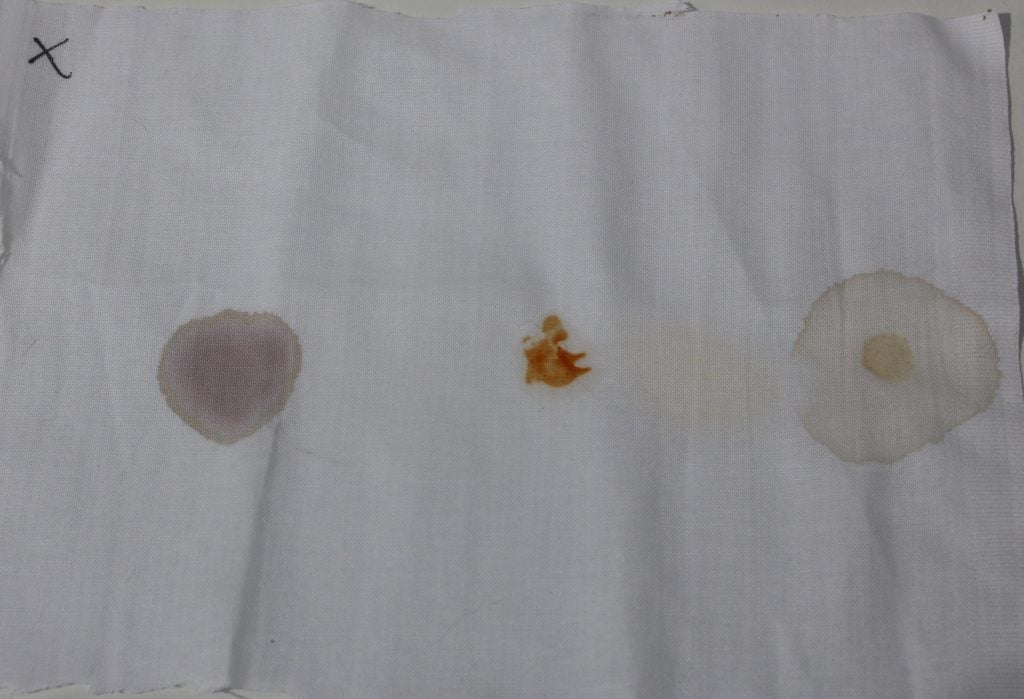 The second wash was a 40ºC synthetics cycle, which used more power at 0.69kWh, most likely because of the higher temperature and differing drum motion. Water consumption doubled to 52.5l, too. A lower spin speed of 1000rpm resulted in increased water retention of 1.48kg – 54.01% of the dry weight of the load, which was reasonable for a synthetics cycle. Stain removal appeared to be better thanks to the higher temperature, with the ketchup being barely visible, although some red wine still remained. 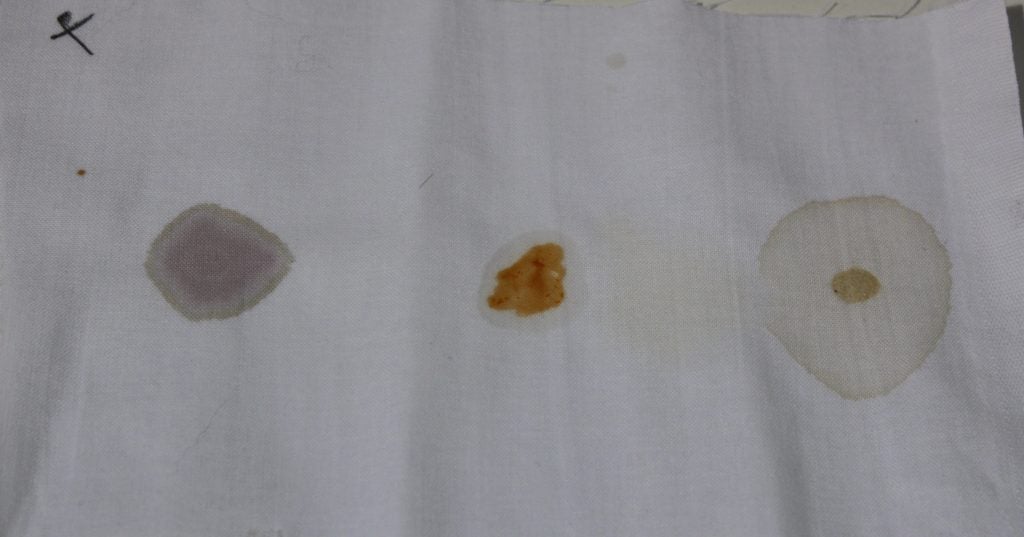 As the Smart Pro is a more affordable machine, I expected that it would make more noise than a more expensive model, although it actually wasn’t that bad. Normal washing recorded a level of just over 60dB, while the spin was noisier at 72.7dB. Both readings were taken from 30cm from the middle of the door

Both figures were about average for a more affordable washing machine and roughly matched up with the figure stated on the EU energy label: 60dB wash and 81dB spin.

For in-depth running costs, I used the figures stated on the EU energy label, which assume 220 washes per year. This meant I could utilise the stated energy and water consumption figures to give an average cost per wash, using average electricity and water costs.

I then worked out how many full loads it would take the Candy Smart Pro to complete all the washing and it showed that the CSO 16105DC3 would cost £49.98 per year for high users, £37.49 per year for medium users and £24.99 for low users. While this isn’t the lowest, even amongst similarly priced washing machines, it would be significantly cheaper if you’re upgrading to the Smart Pro from an older, less efficient washer.

If your washing machine wishlist includes extra capacity to reduce the amount of weekly loads, programmes to tackle everything from a muddy football kit to delicates and speedy settings that make life easier, the Candy Smart Pro should tick a lot of your boxes. The fact that it’s also affordable, without too many compromises on functionality, makes it ideal for families on a budget. Its design and controls could use some improvement, and how much use the app might be is debatable, but it still offers plenty for the price. If you can get by with a slightly lower load and don’t need the app, the Hisense WFGA9014V costs a similar amount but is slightly cheaper to run and performed better in our stain test, while our choice of the best washing machines has lots of alternatives.