What is the Cambridge Audio TV5 (v2)?

The TV5 (v2) is a revamped version of Cambridge Audio’s superb TV5 soundbase from 2015. This new sub-TV speaker has undergone a number of tweaks, including the addition of HDMI ARC – the absence of which we bemoaned in our original review.

The best part is that the TV5 (v2) sells for the same price as the original version, bringing you more of the same TV audio-boosting goodness in a value-added package.

One thing that hasn’t changed, however, is the TV5’s frumpy design. The basic black box is livened up slightly by a removable cloth grille with a few curves and angles cut into it, but otherwise it’s rather workmanlike. To be fair, though, soundbases don’t need to be a work of art – their brief is to blend in, and on that score the TV5 succeeds.

Of far greater importance is the TV5’s solid build quality. The “seamless” MDF bodywork is clad in black gloss paint – an upgrade from the MDF panels and vinyl wrap used by its predecessor – and stands on four chunky feet that provide superb stability. Cambridge Audio says it will support TVs up to 30kg, and we can well believe it.

Size-wise, the TV5 could do with being a little wider. The V-shaped stand of my 55in TV clumsily pokes over the edges, which isn’t the case with my resident Canton DM100. The TV5’s top surface measures 725 x 340mm, so make sure your TV’s base fits before taking the plunge – otherwise, you’ll have to place the soundbase on a shelf below. 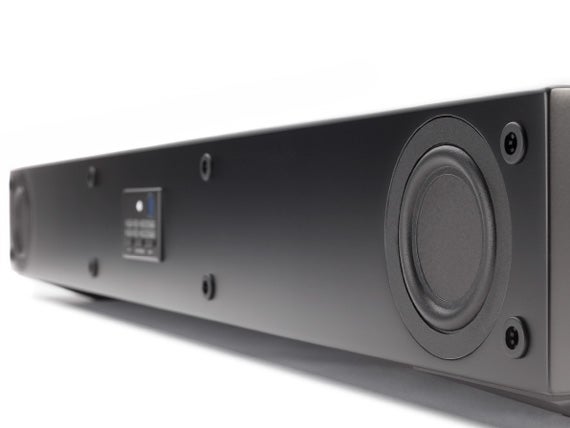 On the front, a single LED shines through the grille in different colours to indicate the selected input. A text-based display would have been more helpful here since it’s hard to glean information from a blinking light. Remove the grille and a control panel in the centre allows you to adjust the volume and set up the TV5’s learning remote function.

Rear socketry includes optical digital, stereo RCA and 3.5mm mini-jack inputs, plus the newly added HDMI ARC socket. The latter sends audio signals from TV to soundbase and allows you to control the TV5’s volume using your TV’s remote. If your TV supports hi-res music playback – via DLNA or USB, for example – the TV5 can handle signals up to 192kHz/24-bit over HDMI.

Good news, indeed. But while the HDMI port is a boon for ARC users, it’s a pity there are no HDMI inputs. That would have enabled you to use the TV5 as a switcher, freeing up HDMI ports on your TV and making setup a bit tidier.

Bluetooth completes the connectivity lineup, this time provided by a Qualcomm aptX chipset instead of the first TV5’s CSR chipset. It stores up to eight devices in its memory.

Not surprisingly, the TV5 (v2) sticks with two 57mm Balanced Mode Radiators as its drivers of choice, which offer wider dispersion than regular speakers. Most drivers move backwards and forwards to create sound (pistonic movement), but the BMR drivers’ ability to move horizontally and vertically results in a 180° soundstage with an “all-room” sweet spot. 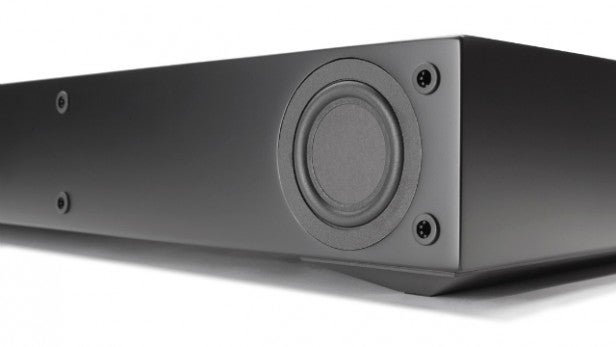 The BMRs are joined by dual 6.5-inch downward-firing subwoofers, which beef up bass output. The TV5 v2 uses a new signal path design and an amplifier that’s 50% larger than previous models. Cambridge Audio hasn’t given any power ratings for the TV5 (v2), but the original version summoned 100W. The TV5’s four sound modes adjust the EQ for different types of material: Film, Music, TV and Voice. 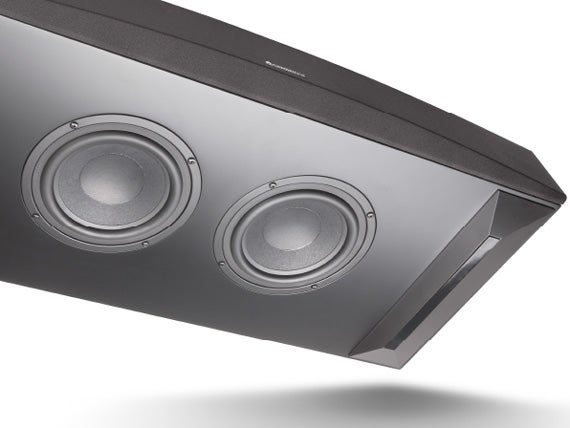 With two single-cable connections – optical and HDMI – you’ll be up and running in minutes. Some might grumble about the TV5’s lack of Wi-Fi and multiroom streaming, but they can be a headache to setup; their absence makes the process blissfully simple. 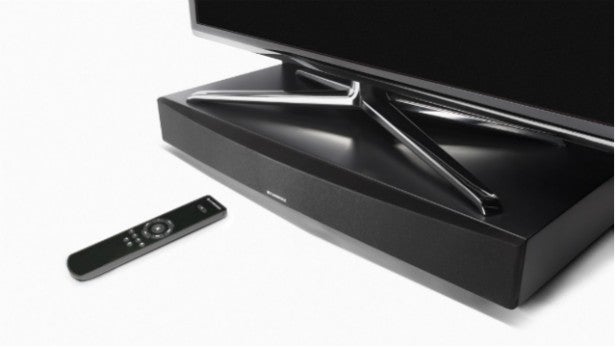 The added wrinkle of ARC does nothing to affect the TV5’s ease of setup. You’ll need to activate CEC and select LPCM audio output in you TV setup menu, but that’s hardly rocket science.

Once installed, the TV5 is a joy to use. Much of the credit goes to the revamped remote, which is a vast improvement on its predecessor. Styled to match other Cambridge Audio products, it’s a well-made, weighty zapper with a rubberised back and solid buttons. The stripped-back layout includes dedicated bass controls – another new addition – and keys for each sound preset and input.

You can, of course, programme the TV5 to be controlled by your TV’s remote, but I actually preferred using the supplied handset.

The original TV5 delivered explosive performance and the TV5 (v2) continues in the same vein. It’s remarkably powerful, filling the room with its huge soundstage and hefty bass, while the dynamic mid-range makes action effects really stand out. It makes quite an impression for what is essentially a glorified TV stand.

As Tony Stark’s house is destroyed during Iron Man 3, missiles explode with a vigorous snap while the woofers lend depth and punch to the impact. Shattering glass is crisp and precise, and there’s a solid rumble as debris tumbles into the sea. This rich, forceful sound will make you wonder why you put up with your TV speakers for so long. 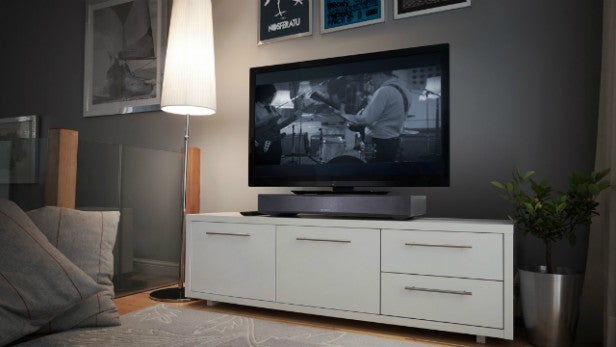 The woofers integrate smoothly with the BMR drivers, forming a tight, cohesive union and a pleasing overall balance. Bass isn’t boomy and the subs show off their agility with fast-paced machine-gun fire. 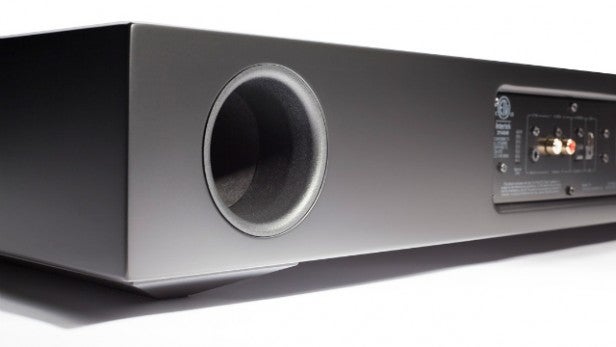 The BMR drivers also create an expansive front image, moving effects with purpose. Claims of a wide sweet spot are on the money too, the TV5 retaining a even tonal balance from any listening position.

Even more impressive is the clarity of the TV5’s mid-range. Lines of dialogue easily cut through the bangs and crashes. Switch over to TV shows and its vocal clarity is even more pronounced. Even at middling volume levels, presenters’ voices are a dominating presence in the room, but their full-bodied character stops them sounding unpleasant. 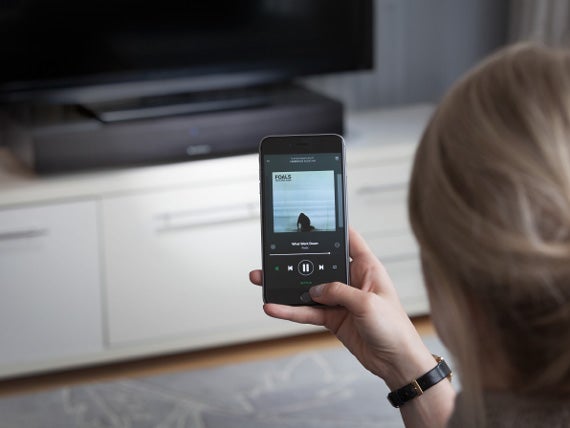 Treble reproduction is impressive: voices are nuanced and busy movie scenes are bursting with small details. But when you crank up the volume the top-end can sound a little hard, and for my money soundbases such as the Cabasse Stream Base, Geneva Model Cinema and Canton DM75 offer greater fluidity and insight.

Soundbases aren’t normally noted for their musical abilities, but the TV5 does a fine job. Its crisp, punchy and well-balanced sound is ideal for day-to-day Bluetooth streaming. As with movies, the BMR drivers create a wide and immersive soundstage with expressive detail and solid bass. 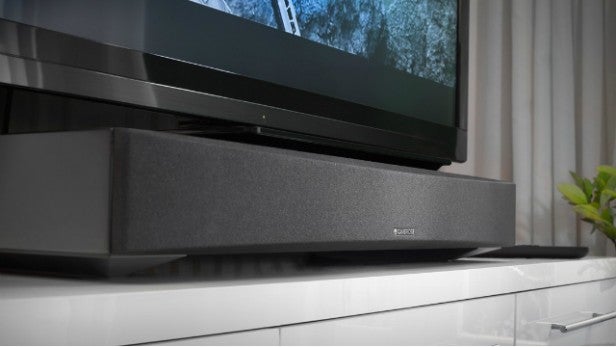 Should I buy the Cambridge Audio TV5 (v2)?

Like its predecessor, the TV5 (v2) is an impressive soundbase offering powerful sound and excellent build quality. It’s discreet, easy to install and the addition of HDMI ARC is very welcome.

On the downside, it’s a shame Cambridge Audio didn’t throw in a couple HDMI inputs, plus other soundbases from the likes of Geneva, Cabasse and Canton offer a more insightful, finessed performance – although, admittedly, some of these are more expensive than the TV5.

For those reasons this revamp doesn’t quite hit the heights of the original TV5 score-wise, but it’s still an admirable soundbase with a big performance that’s hard to ignore.

Cambridge Audio ups its soundbase game with the new TV5, offering superb sound quality and some useful new features – but it still doesn’t feel like the definitive version