With Tannoy’s HTS-101 and Jamo’s A 101 HCS 5 offering amazing sound quality at affordable prices, you’re spoilt for choice when it comes to compact speaker systems. And Cambridge Audio’s Minx S315 isn’t about to make your decision any easier. Like its rivals, it’s a stylish 5.1-channel system that features a set of dinky, space-saving satellites that blend in discreetly with their surroundings – an increasingly important factor given that most people simply don’t have the space to house enormous floorstanders. 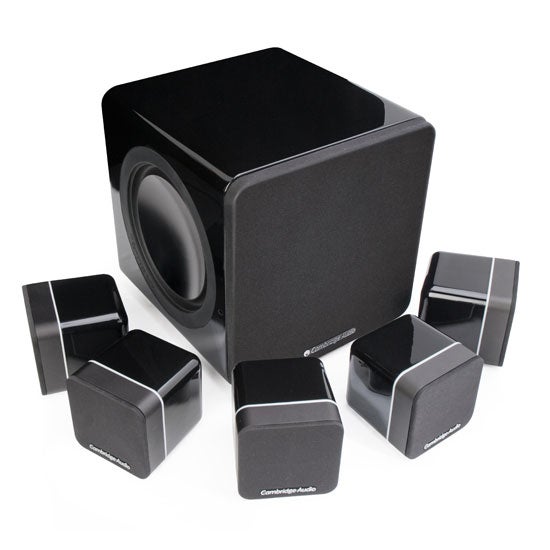 But according to Cambridge Audio this system is capable of delivering the same power and refinement you get from larger speakers. How? It’s the result of a two-year development programme by Cambridge Audio looking into ways of getting the optimum sound quality from small cabinets.


The S315 system comprises five identical Min 10 satellites and the X300 subwoofer. The cube-shaped satellites measure 78(w) x 78(h) x 85(d)mm, which is smaller than a can of Coke (see below). They’re possibly the cutest compact speakers we’ve clapped eyes on, and with their gleaming gloss black (or white) finish, curved edges and light grey trim they’re extremely stylish too. Add luxurious build quality into the equation and you’ve got yourself a real talking point for your living room.

The satellites feature removable grilles, allowing you to see the single driver lurking behind. On the back is a pair of silver binding posts, which can be pulled out completely to accommodate banana plugs. They also support wall, floor stand or table-top mounting, and there’s a basic wall bracket in the box, but for anything more elaborate you need to purchase optional accessories, which is a little cheeky given that the much cheaper Jamo A 101 HCS 5 throws in table stands as standard. The 600D table-top stand, 600P adjustable floorstand and 400M pivoting wall mount retail for £9.95 (each), £79.95 (pair) and £14.95 (pair) respectively. 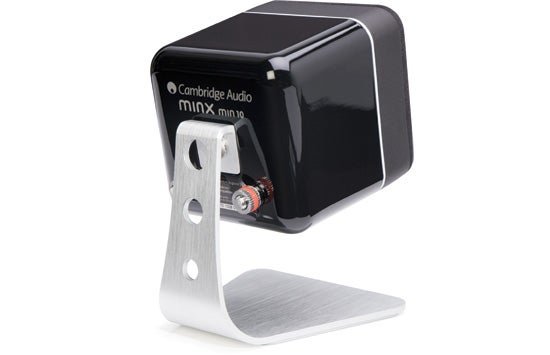 The X300 subwoofer looks like a bigger version of the Min10, with its cube shape, shiny gloss-black finish and curved corners. At 311mm high it’s actually one of the world’s smallest subs, and should therefore pose absolutely no problem when finding a space for it in your living room – although Jamo’s wall-mountable sub is logistically easier to place. All in all this is a great-looking and well-made system that easily justifies its asking price. 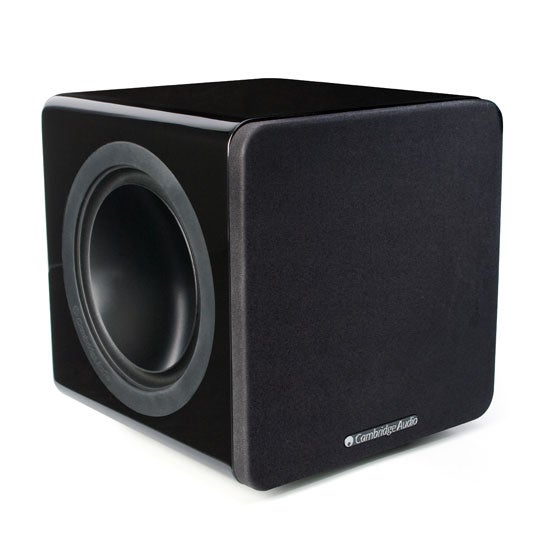 Each Min 10 satellite uses a single 2.25in Balanced Mode Radiator (BMR) driver that use similar ‘bending wave’ methods to flat-panel speakers, alongside traditional ‘pistonic’ speaker movement. This is said to provide a wider frequency response than rival compact speakers, while its broader sonic dispersion avoids the ‘sweet spot’ phenomenon. The satellites achieve a frequency response of 140Hz to 20kHz. 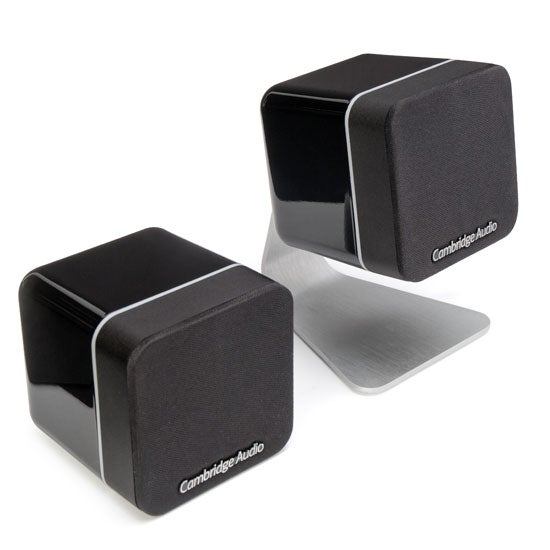 The X300 subwoofer is also full of tricks. It features a 300W digital amplifier, a digital signal processor and two drivers – a forward-firing 8in woofer and an 8in Auxiliary Bass Radiator (ABR) that lends extra punch to the low frequencies.

On its rear panel is a range of controls that allow you to integrate it with the satellites. There are dials governing volume, phase and crossover frequency, and for the latter Cambridge Audio has helpfully marked where it needs to be for both the Min 10 and larger Min 20 sats. You’ll also find stereo line input and output, a switch that lets you select between ‘Force On’ and ‘Audio Detect’ power modes, and a connection that will support a future wireless module. 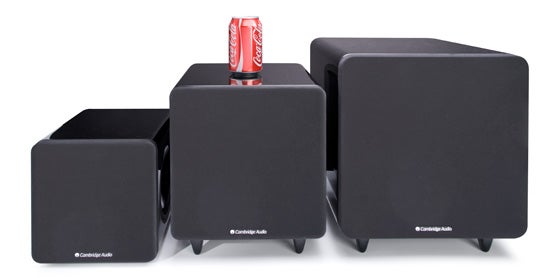 Setting up the Minx 315 is easy – it’s simply a case of connecting your cables to the robust terminals on the back of each speaker and plugging the relevant cables into the sub. And with all the controls you need on the sub it shouldn’t take much trial and error before you find a satisfactory level. Things get a little more complicated when wall-mounting or attaching stands, but the accessories’ simple design and cable tidy features result in a nice clean look. 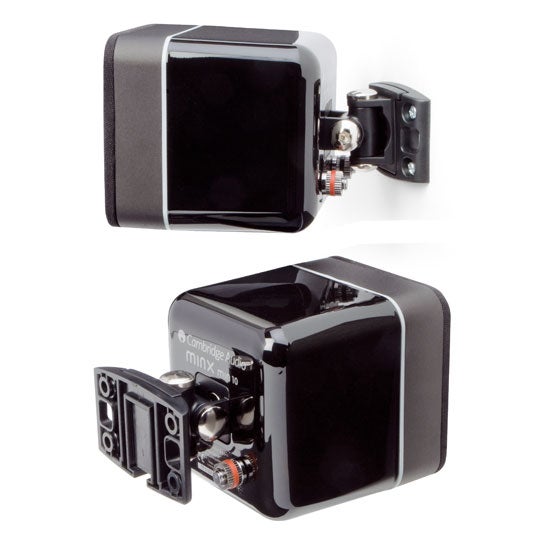 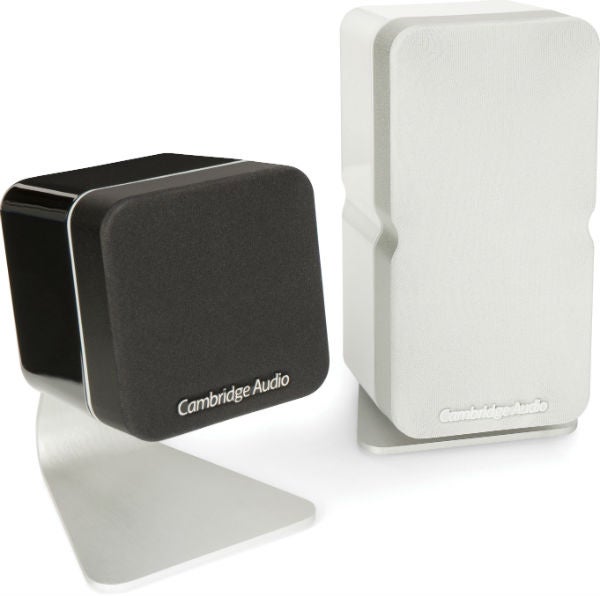 Firing up the Minx system is a bit like the moment in Men in Black when Will Smith fires the Noisy Cricket for the first time. We simply weren’t ready for the blast of rich, powerful sound that these dinky speakers are capable of kicking out. It seems inconceivable that such small cubes, which are virtually invisible when dotted around the room, can fill a room as easily as they do, but here’s the proof. 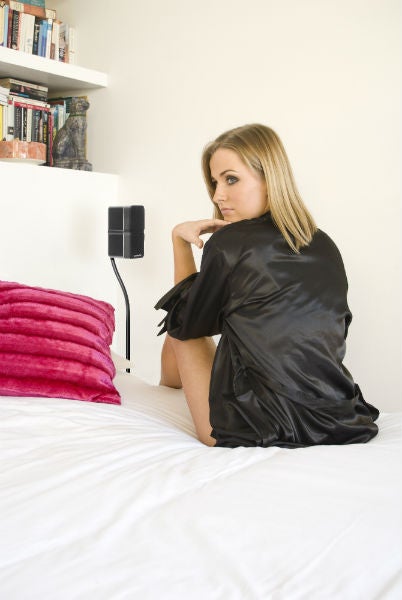 With our usual gamut of test discs the S315 really showed off its skills. The ferocious action scenes in Avatar and The Legends of the Guardians on Blu-ray beggar belief, firing out the brutal sounds of battle with the sort of composure and bite befitting a bigger, more voluminous set of speakers. Explosions and rattling machine guns during Avatar’s ‘Attack on Home Tree’ chapter sound fast and dynamic, making for one of the most thrilling renditions of this scene we’ve heard from a compact system.

The system’s impressive speed are power are backed up by excellent detail reproduction and top-drawer dialogue handling. High frequencies are crisply rendered, pulling plenty of subtle detail out of the mix during busy and subdued scenes. You never have to strain to hear speech no matter how frenetic the action. 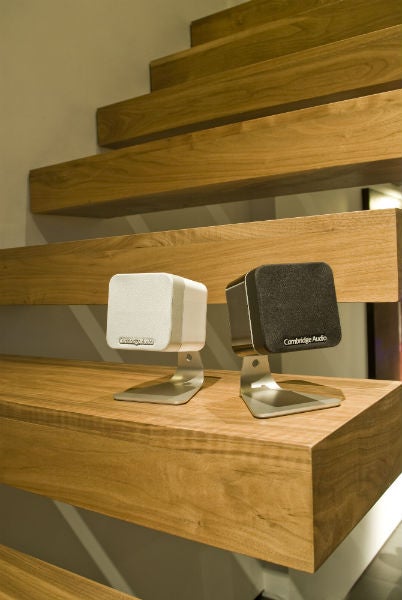 Also impressive is how well the subwoofer and satellites meld together. They form a unified whole that seeps into every part of the room, and you can never really tell where the bass is emanating from. And if it’s punch, tautness and depth you’re after, the X300 is more than qualified.

If we’re being picky, they’re missing that extra sprinkling of fairy dust that separates serious full-size speakers from compromised compacts. With music for example, it doesn’t quite tease out every last microscopic detail – breaths, fingernails on strings, the dragging of a brush along a drum – but it’s still more refined than you’d expect.

And after cranking the volume up high, some high frequencies strained a touch, but kept its poise a lot better than some compacts we’ve tested. On the whole this is an incredibly accomplished performance.

Verdict
Jamo and Tannoy have already set the bar very high in the compact speaker system market, but Cambridge Audio’s Minx S315 sails right over it. The power on offer from such diminutive speakers defies physics, while the thrilling dynamics, clear detail and punchy, potent bass create the illusion that there are much larger speakers in the room. Build quality and design are also top-notch, but the only issue we have is the price compared with the competition – they cost twice as much as the Jamo A 101 HCS 5, and although build quality is superior, we wouldn’t say the performance is twice as good.