What is the Cambridge Audio CXR120?

The CXR120 and the step-up CXR200 (£2,000) are the first new AV receivers launched by Cambridge Audio since 2013’s acclaimed Azur 751R, so they’re kind of a big deal. Both models take a performance-led approach, eschewing new-fangled features such as Dolby Atmos and DTS:X in favour of high-grade components and top-drawer build quality.

The CXR120 is nominally the entry-level model, with a lower power rating than the CXR200, but with a £1,500 price tag it clearly isn’t for the budget buyer. Asking that much money for a receiver that lacks such alluring features as Dolby Atmos is a bold move given the generosity of the competition, but Cambridge Audio is clearly confident in the sound quality of this 7.2-channel receiver. Let’s find out if that confidence is justified.

As you might expect at this price, the CXR120 is a stunningly engineered machine. The thick, brushed-metal faceplate looks elegant and esoteric, enhanced by the gorgeous “floating” design – a feature used across the CX range. Elsewhere, an acoustically damped metal chassis, extruded heatsink and rigid aluminium top cover provide the requisite rigidity.

Cambridge Audio has stripped down the clutter of the 751R’s fascia for a cleaner, minimal look. The main focal point is a large “starburst” display panel, which shows sources and volume levels clearly despite the presence of a tinted window to soften the brightness. Dotted around the display are a few buttons for controlling menus, sources and radio stations. The large volume dial turns with a firm, smooth action that oozes high-end quality.

A few sockets are provided on the front for your convenience, including a headphone output, an MHL-compatible HDMI 1.4 input, 3.5mm mini-jack input and a USB port that lets you play music from storage devices.

Moving to the rear, we find a healthy if not exhaustive selection of sockets. Six HDMI 2.0 inputs should suffice for most users, and since all of them support HDCP 2.2, 4K and 3D, it’s geared up to handle current and next-gen sources. The HDMIs pass through signals while in standby, so you don’t have to turn it on just to watch the news.

These are joined by two HDMI outputs that allow you to drive two displays at once, although a separate, second-zone HDMI output is reserved for the CXR200. One of the HDMI outputs supports Audio Return Channel.

Elsewhere on the busy back panel are twin subwoofer outputs and USB ports for the supplied Wi-Fi antenna and optional Bluetooth module. The antenna connection is positioned directly below the HDMI outputs and has to be tilted to avoid the cables, which is a little clumsy.

There are plenty of analogue audio inputs and outputs, plus a set of 7.1-channel inputs and optical and coaxial digital inputs (two of each). Ethernet, RS-232, 12V trigger and IR emitter/receiver ports complete the lineup.

Even without fancy features such as Dolby Atmos, DTS:X or AirPlay on board, the CXR120 still serves up a decent selection of specs. Of greatest interest to music lovers is UPnP music streaming (via WiFi or Ethernet), which comes courtesy of the same Stream Magic module found in Cambridge Audio’s CXN network player.

You can access tracks on your media servers, from bog-standard MP3s up to hi-res 192kHz/24-bit FLAC, ALAC, AIFF and WAV files. And those with a big collection of hi-res SACD discs can rest assured that the CXR120 supports DSD via the HDMI port.

You can also use the CXR120’s internet connection to stream music using Spotify Connect, or choose from a huge range of internet radio stations.

In terms of spec the CXR120’s discrete class AB amplifier design includes a low-flux toroidal transformer that delivers 60W per channel with all channels driven (8ohms) or 120W with two channels driven (6ohms). DSP processing is handled by a 32-bit Cirrus Logic chip and high-resolution DACs.

It’s easy to get to grips with the CXR120, thanks to its simple onscreen menu system. The black and white colour scheme and no-nonsense layout make it a doddle to find the settings you’re looking for.

You can manually tweak the amp to your heart’s content, but most sane users will leave it to the automatic setup, which sets levels and distances but doesn’t touch the tonal characteristics. There’s a microphone in the box, which reads test tones emitted by the CXR. It’s quick and accurate.

The unit is controlled using a practical, user-friendly remote. The buttons are clearly labelled and arranged into helpful sections, plus the handset has a solid, tactile feel that befits a product of this calibre.

If you’d rather use your phone to control the CXR120, you can do so using the free Cambridge Connect Android/iOS app. This intelligently designed software lets you control volume and power – but, more importantly, it controls network music playback. 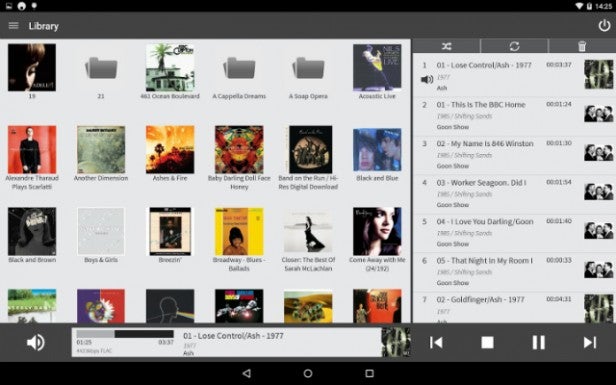 You can browse your UPnP servers or NAS drives, arrange tracks into queues and search for internet radio stations. The design is stylish and eye-catching but not frivolously so, with colour thumbnails and stylised icons helping you to find your way round the logical menu system.

Just one minor gripe to report: you can access the CXR120’s streaming functionality only using the Cambridge Connect app, not with the onscreen menus and physical remote.

Like the TVB2 soundbar we tested recently, the CXR120 handles movies with mesmerising finesse and clarity – but it definitely sounds better the higher you crank up the volume. At low-to-middling levels movie soundtracks can fall a little flat, but once you start turning up the dial the CXR120 shows its true colours, with a powerful and entertaining performance.

Play the opening scenes from Pacific Rim, for example, and the CXR creates a colossal soundstage as Gipsy Danger and Knifehead battle off the coast of Alaska. The robot’s stomping footsteps have incredible weight and heft, sending waves of bass flooding into every corner of the room, while roaring Kaiju and crunching metal sound forceful and incisive.

Sudden explosions and punches hit with impressive force. Crucially, the CXR belts out the mids and highs with plenty of composure, side-stepping the brightness you might get from a budget receiver.

The soundstage is superbly organised, allowing the CXR120 to make sense of a very chaotic fight scene. It brilliantly conveys the different tonal quality of each effect, making them clear and easy to distinguish amid the carnage – it’s not just one big mid-range mess.

Meanwhile, precise effects placement and speedy steering immerse you in a 360-degree soundstage as the two giants lumber around the screen, backed by a cacophony of crashing waves. It’s a thrilling experience.

But the CXR120’s greatest talent is for detail reproduction. Refined treble means every scene is awash with delicate textures, while voices sound realistic (backed by solid bass depth when called for). And despite having seen Pacific Rim many times, the CXR120 still shed light on details that I don’t always notice: fingers gripping the wooden sticks during the Kendo fights, for example. Besides bringing clarity to specific effects such as shattering glass, it also lends a sense of air and space to atmospheric sounds.

What’s more, the CXR120 stays true to Cambridge Audio’s hi-fi heritage with an impressively musical performance. Whether you’re playing hi-res tracks over a network or streaming MP3s from a Bluetooth device, the CXR delivers music with remarkable agility, energy and insight. It’s the sort of performance that almost justifies the money on its own.

Should I buy the Cambridge Audio CXR120?

Without cutting-edge features such as Dolby Atmos and DTS:X, the CXR120 relies on the quality of its performance to justify its relatively high price tag. It just about pulls it off.

Although it lacks a little dynamism at “normal” listening levels, crank it up and you’re treated to an exciting, full-bodied and detailed sound. Its refined presentation is even more impressive with music, drawing on Cambridge Audio’s enviable hi-fi experience. Throw superb build quality, stunning design and effortless operation into the mix and the CXR120 is money well spent.

The CXR120 is an entertaining, musical AV receiver that eschews fancy features for high-end build quality and performance – and remarkably, the gamble pays off.