Billed by its creators as an unashamedly audiophile Blu-ray player, Cambridge Audio’s Azur 751BD is equipped with the sort of mind-boggling build quality and electronics you’d expect from an £800 deck. It’s aimed at those who want the best possible movie experience no matter the cost, but it’s not afraid to throw in a few features that some high-end brands would snootily dismiss as gimmicks. This 3D-ready machine one of three players in the company’s current range, alongside the lower-specced but cheaper 651BD and last year’s 650BD.

Let’s start with the build quality, which is right up there with the very best Blu-ray players. Unpacking the player from the box is your first indication that it’s a cut above the usual budget fare – it’s delicately wrapped in a blue sleeve with all the accessories neatly arranged in boxes around it.

Pull it out and revel in the deck’s substantial, luxurious construction (it weighs a hefty 5kg) bolstered by the all-metal, 85mm-high casing and the brushed aluminium front panel. All of the electronics are housed in a new acoustically damped chassis with dual-layer damped feet, which should help keep excessive resonance at bay.

Although the deck’s design doesn’t dazzle in the same way as a Marantz or Philips player, the flat brushed aluminium fascia oozes sophistication and it’s perfectly matched to Cambridge Audio’s AV receivers. The front panel is far from minimal, covered in buttons, logos and a busy blue-lit display panel. A USB port is also found there, covered up by a thick rubber dust cap, and when you eject the disc tray it glides forward silently, another indication of the deck’s quality.

There’s also a button on the front that lets you toggle between three anti-alias filter settings (linear, steep and minimum), which allow you to gently fine-tune the audio output.

The rear panel offers a comprehensive selection of sockets, the most important of which are the two HDMI v1.4 outputs, allowing you to send audio signals to an AV receiver and 3D pictures to a TV simultaneously – which is a real godsend if your receiver lacks 3D-capable HDMI v1.4 inputs.

And if your amp has no HDMIs at all you can take advantage of the 7.1-channel analogue outputs.

They’re joined by component, composite, optical and coaxial digital audio and analogue stereo outputs, as well as an Ethernet port and a second USB port designed to house the supplied USB wireless LAN adapter (WD650-BD-N, which also comes with an extension cable) or a USB storage device for media playback if you prefer.

There’s also an IR emitter input, an RS-232C port and, unusually, an eSata port that lets you connect a compatible hard-disk drive and play back digital media, which completes a generous set of sockets.

The 751BD is absolutely bursting with features. We’ve mentioned the 751BD’s 3D compatibility, but of greater interest to enthusiasts is the list of high-quality internal components, including a Marvel DE2750 QDEO video scaler for the primary HDMI output; a Mediatek MTK8530 chip for the second HDMI port; five dedicated Wolfson WM8740 audio DACs (the sort you find in dedicated CD players); and Analog Devices ADSP-21261 DSP chip running Anagram Technologies Q5 audio upsampling tech, which Cambridge Audio claims can boost detail from CDs up to SACD or DVD-A levels (192kHz/24-bit). 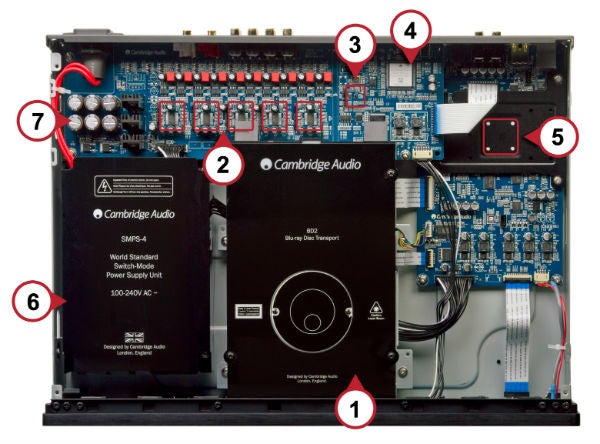 It’s also able to play a wide range of formats. On the disc side, it spins Blu-ray, DVD (with 1080p upscaling), CD/HDCD, DVD-Audio and SACD, making this a perfect deck for those with large, varied collections. And on the digital side, it decodes XviD, AVI, VOB, WMV, MKV, JPEG and AVCHD. Weirdly it won’t play DivX files though, which we guess must have something to do with licensing costs.

Additional BD Live content can be downloaded or streamed from the web over Wi-Fi or Ethernet, and with 1GB of built-in memory you don’t need to attach your own storage.

And despite not being mentioned in the manual or on the company’s website, the deck can also stream content over your home network. We were able to stream the above file formats wirelessly from our laptop with absolutely no fuss, thanks to the fast and reliable connection, plus it skips from one menu to the next with rare alacrity.

Similarly, Cambridge Audio has kept quiet about the deck’s ability to access the online Picasa service. Die-hard photo fans will be in seventh heaven, but we think it’s a fairly lame online offering – let’s hope Cambridge Audio adds to it in future.

Using the 751BD is a piece of cake. When you boot it up for the first time, an Easy Setup mode guides you through the main settings (resolution, aspect ratio, audio etc) but the real meat of the installation process is found in the thorough setup menu – which, coincidentally, boasts exactly the same jazzy, modern-looking design as OPPO’s Blu-ray players. That’s great news, because like OPPO’s players, this setup menu can be accessed without having to stop the film, superimposing its graphics over the picture.

Here you can delve into an reasonably detailed range of picture adjustments and speaker settings, further boosting the decks audio and videophile credentials. When tweaking the pictures, three memory settings let you store your optimised picture. There are separate menus for the two HDMI outputs, with the Mediatek chipset offering fewer adjustments than Marvell QDEO. For audio you can adjust the speaker size, distance and volume for each channel, as well as setting the crossover point.

Wireless setup is simple – after selecting ‘Wireless’ from the network menu, the deck scans for access points quickly and lets you enter your encryption key using a very slick text-entry box.

Your content can be found in the Home menu, a bespoke blue screen with six options – Music, Photo, Movie, My Network, Internet and Setup Menu. It looks rudimentary with its simple white icons, but it’s easy to navigate.

My Network is where you’ll find content on connected PCs and NAS drives, while Internet is your gateway to Picasa. It’s all presented in a clean and logical design, with judicious use of icons and friendly colours, all of which makes it easy to follow. 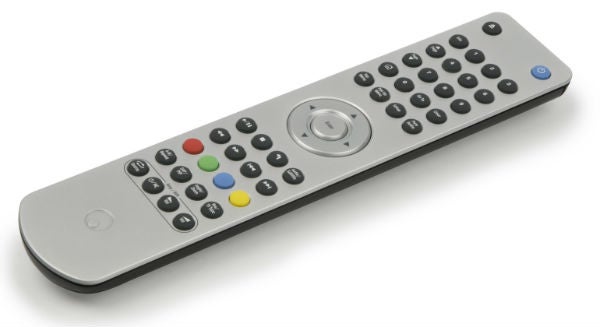 The remote also plays a part in this care-free operation, sporting rubbery buttons and a perfectly placed multi-direction pad in the centre. That said, some of the labelling is a little on the small side and the ranks of identical buttons blur into one.

The 751BD is a superlative performer in both the visual and sonic domains. The super-charged silicone driving the pictures does a slick job, rendering the dusty Western landscapes of True Grit with gob-smacking clarity.

Flakes of falling snow, wispy facial hair and stark, leafless trees look stunningly clean and sharp, while the deck lets none of the nuances of the picture slip through the net, such as subtle colour tones, shading and shadow detail. Rooster’s dark coat looks like a solid 3D object rather than a indistinct black mass. It’s as close to perfect as you’re going to get.

It’s equally assured with 3D pictures, delivering a pixel-perfect reproduction of Avatar’s wild, vibrant CG images. The sense of depth is effortlessly conveyed and the complete freedom from artefacts ensures you get utterly absorbed in Pandora’s landscapes, rather than getting distracted by motion blur or ghosting.

The deck also displays an assured hand with both the Blu-ray and DVD versions of the Silicon Optix HQV disc, making most of the tests look crisp and poised, with only one or two wobbly moments to speak of. And with DVD movies it upscales the picture without any major slip ups – we certainly couldn’t pick out any edge-stepping, although it couldn’t completely avoid mosquito noise around moving objects.

We couldn’t even catch this player out on disc loading times – it loads up Terminator Salvation quickly, while less demanding discs like Inception and True Grit get fired up at near-DVD speeds.

As for sound quality, the effect of all those high-grade electronics is instant and dramatic. The 751BD demonstrates a silky touch with music on SACD and DVD-A, drawing out plenty of detail and reproducing vocals with exceptional purity. Its timing, bass depth, sense of openness and imaging are all first class, completely justifying the price tag if music is your passion. And all this is through the HDMI output – switch to the multichannel outputs, and the sound is similarly assured. This exceptional performance is what most sets the 751BD apart from its cheaper mass market rivals.

Verdict
All things considered, Cambridge Audio has done a top-notch job with the 751BD. It’s a fantastic Blu-ray player, boasting sublime, rigid build quality that lays the groundwork for a sensational picture and sound performance.

There’s also a generous amount of eye-catching features on board – Wi-Fi, media streaming, 3D support and universal format support. The fact it’s also easy to use is merely the icing on the cake.

Sure it’s expensive, but with such amazing build quality and performance it really is worth the investment. Its mass-market rivals offer better web content – the 751BD’s single-site showing is poor – but it could be argued that the audience for players like this don’t necessarily care for such new-fangled frills.