The AXA35 successfully fulfils Cambridge Audio’s remit of offering great sound at an affordable price. While it faces competition from Marantz in the form of the venerated PM6006, the AXA35 marks itself out as hi-fi piece that gives a confident and self-assured performance. Cambridge Audio has succeeded with the AXA35 where not many hi-fi brands dare to go.

The AXA35 is a stereo amplifier that slots into Cambridge Audio’s new AX range of hi-fi components. With a focus on performance and affordability, the AXA35 boasts more features than the step-down AXA25, including a built-in phono stage for turntables.

The hi-fi world is just as subject to the vagaries of fashion as any other. You don’t need to be any kind of trend savant to know that “wireless this” and “voice-control that” are where it’s at with hi-fi just now.

And just like any other kind of fashion, of course, this sort of thing is exclusionary. What if you refuse to be a slave to the latest trends? What if you know what you like and you want to stick to it? What if you like the old days best?

In hi-fi terms, Cambridge Audio isn’t afraid to deliver wireless functionality or voice control to those who want it. But it’s also not about to neglect those stalwarts whose tastes are a little more traditional. That’s why it’s launched a new, six-strong, entry-level range of stereo separates – just like the ones your folks used to have, back in the days of Polaroid photos.

Here I’m looking at (and listening to) the AXA35 stereo amplifier. Can a brand-new yet retro device like this make us all nostalgic for the good old days?

By the standards of a long-in-the-tooth concept like an affordable stereo amplifier, the AXA35 is quite a good looker: the smoky grey finish is pretty sophisticated (to my eyes at least − no one ever accused me of being a slave to fashion). It’s not all that bulky and is visually quite arresting thanks to the minimalist selection of fascia controls and equally minimalist display. 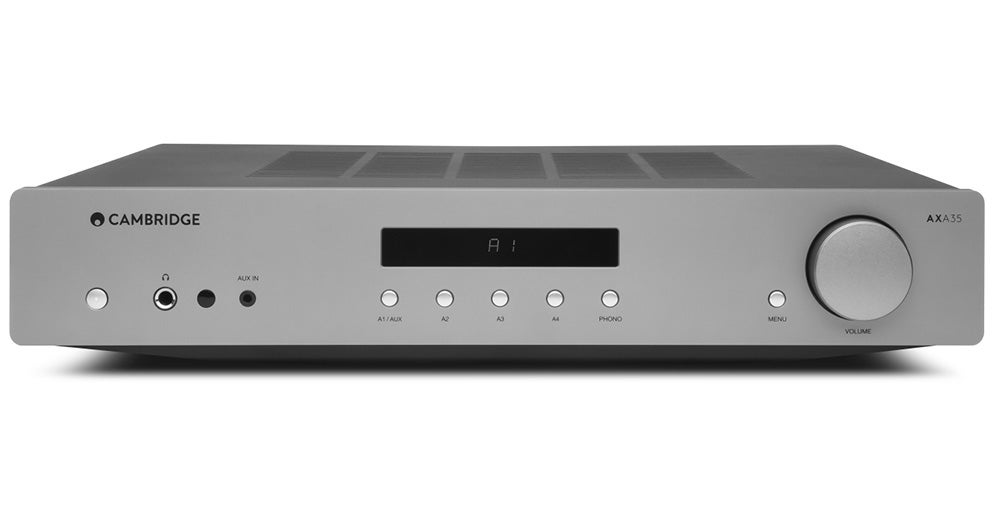 Putting the AXA35 on a little plastic plinth that’s − to all intents and purposes – invisible, is a canny move on Cambridge Audio’s part, too. It makes the amp look a little like it’s floating, and in a sector of the market where aesthetics play a distant second fiddle to cost considerations, it’s a very welcome design oddity.

It should be apparent by now that neither wireless streaming nor voice control feature on the AXA35. There is no onboard digital-to-analogue convertor either, and consequently no digital inputs. This is a staunchly analogue stereo amplifier, just like they used to be back when all this was fields…

The front panel also features a 6.3mm headphone socket and a menu button that allows the balance, bass and treble to be adjusted via the display. The big volume control on the far right scrolls smoothly and feels reasonably robust.

Sadly, “reasonably robust” doesn’t apply to the remote control handset. It feels like a repurposed DVD wand, and the gaps where unnecessary buttons have been blanked over are obvious to the touch. It’s a bit like buying the lowest-spec car in the range and seeing all the empty areas in it where the more expensive versions have buttons.

On the inside, the AXA35 is − hey! − a 35W-per-channel device. It’s not the most exciting number you ever saw written down, but in practice it’s more than enough to drive most price-appropriate speakers to quite significant volumes without alarm.

By the standards of budget-conscious stereo amplifiers, the Cambridge Audio AXA35 is a remarkably self-assured listen. No matter the sort of material you serve it up, there’s no suggestion it ever feels out of its depth.

I gave it an all-around listen − Neil Young’s Cortez the Killer via Spotify, on a smartphone, through the 3.5mm input, sounds confident, straight-edged (as much as Neil Young can ever sound all that disciplined) and there’s plenty of detail revealed about the condition of both Young’s larynx and the state of his guitar strings. The low-level dynamics are handled well, and there’s well-controlled impact to the drumkit. 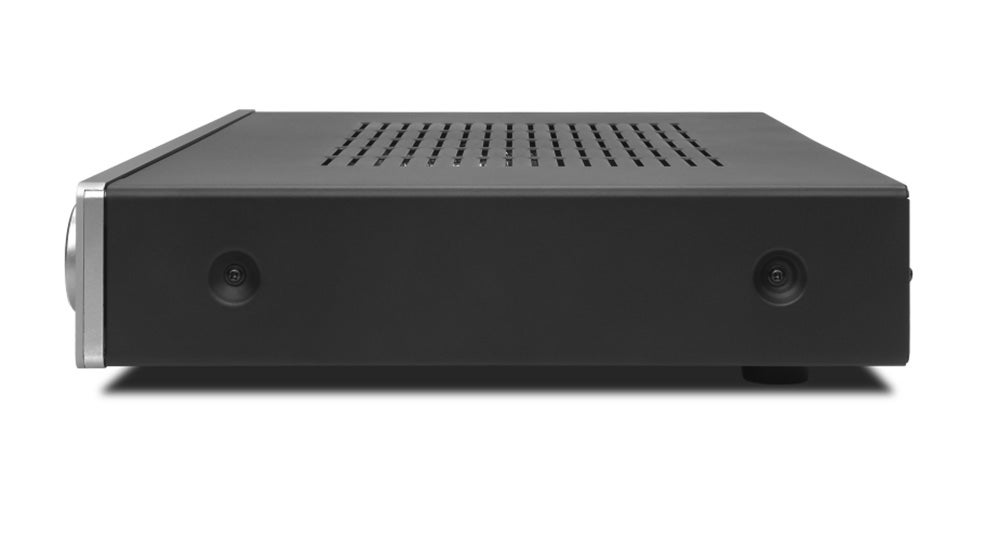 It’s a similar story where a CD of Lolye Carner’s Ain’t Nothing Changed is concerned. The essentials of the midrange are served up in full, there’s the necessary rapidity to the busy kick-drum, and the overall integration of the frequency range is smooth and convincing.

It might be the AXA35’s confident way with timing that’s the single most surprising/impressive aspect of its performance. Vinyl gives a system every chance to show off its facility (or otherwise) for the timing and unity of a recording, and the AXA35’s phono stage lets Felt’s The Splendour of Fear roll along in the most natural manner. 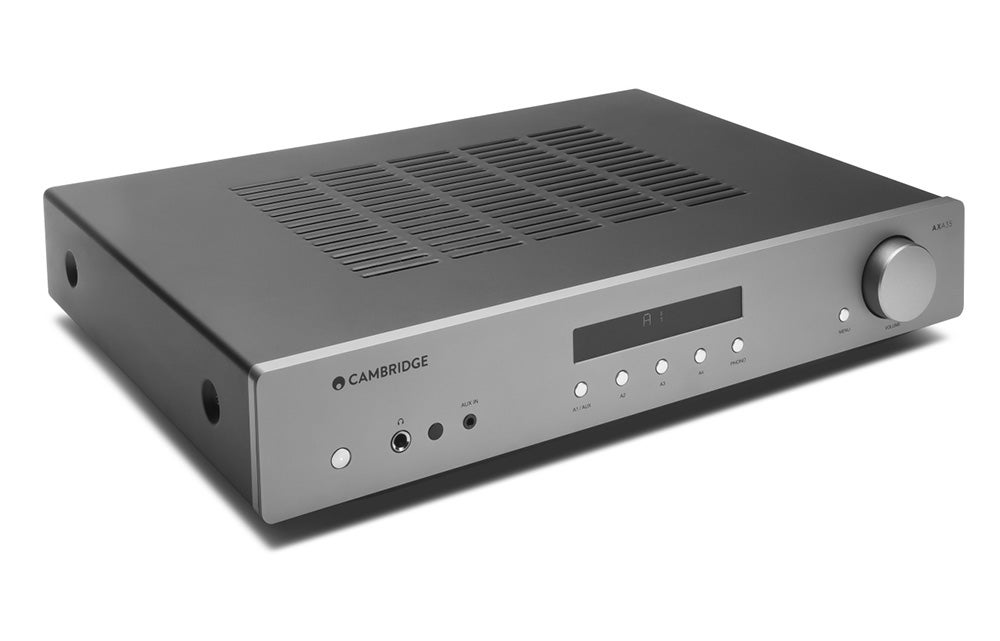 Really, it’s only the AXA35’s lack of out-and-out power that could be described as a limitation. There’s no shortage of attack, and it’s perfectly happy to roll its sleeves up when the music demands it, but a tune like Funkadelic’s Standing on the Verge of Getting It On is more demanding in the “quiet-loud-quiet” department than the AXA35 is absolutely comfortable with.

You should buy the Cambridge AXA35 if…

There’s greater full-on fidelity from the AXA35 than there you’ll get from other similarly priced efforts – you should definitely hear it before you spend £200 or so anywhere else.

You shouldn’t buy the Cambridge AXA35 if…

The most obvious alternative is Marantz’s PM6006 – these days it can be had for very similar money to the AXA35, and it has an onboard DAC and digital inputs as well as a phono input for a turntable, so is a bit more flexible than the Cambridge Audio.