“Never judge a book by its cover,” is a well worn phrase I like to open romantic encounters with. While I mean it as a way of persuading people to stick with me despite the grotesque, hideous formation that sits atop of my shoulders, in the case of Calvino Noir, it’s an idiom that serves more as a word of warning.

Few games on your mobile will ever come close to matching Calvino Noir in terms of visuals and delivery: from the moment you cross the road in the game’s opening moments, with rain steaming down and catching the light of the street lamps, it’s clear that Calvino Noir wants to pitch itself as a game of real quality. Its near black and white visuals (yes, that’s where the ‘Noir’ in the game’s moniker comes from) marries well with its brooding, intentionally clichéd script, all standing as the perfect backdrop for this 1930s adventure. 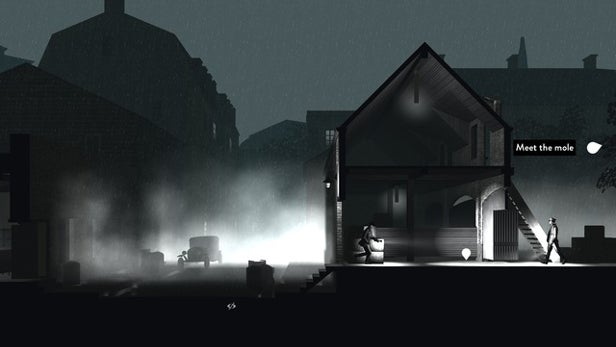 And an adventure is exactly what Calvino Noir is designed to be. Led more by narrative than action, this 2D point-and-clicker throws you into the murky world of spy mercenaries – or ‘scramblers’ as they’re known in play – as you tackle the depths of a conspiracy that spreads across Europe. Initially playing as Englishman Wilt, whose dry and sarcastic take on the world around him helps ground the entire adventure, you’re able to switch between additional characters as the story unfolds, the different skills at their disposal enabling you to progress through the different areas of play.

In theory it’s a nice set up. Much of your time is spent either dodging guards or hunting for keys to open up new areas, and knowing which characters to send to each area adds a bit of extra spice to proceedings. Problem is, the delivery doesn’t quite live up to the promise. The controls are intentionally simple; a tap of the screen is enough to send Wilt wandering or running in that direction, while any action points – such as opening doors, or hiding behind an object – are clearly marked on screen.

An early encounter with a guard during my playtest, however, highlighted that the two types of controls sometimes clash. Instead of hiding as intended, the associated screen tap actually caused Wilt to run straight into the guard in question, seconds before being shot at point blank range. 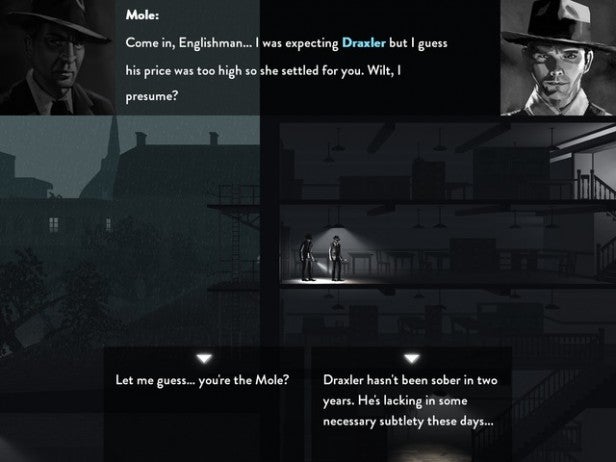 There are, however, two bigger problems than this that blight Calvino Noir throughout. Firstly, despite all the sheen of the game’s admittedly slick and sleek setting, and even taking into the account Calvino Noir’s sharp script, the whole thing is a little…dull. After the initial rush that comes from exploring what is admittedly a beautiful world had subsided, I found it hard to push myself on any further. Sneaking past guards in an intentionally barren world just isn’t that interesting in practice, and the design of the levels isn’t sufficiently well crafted to keep you on the edge of your seat.

More crushing than this is the fact that, for large portions, Calvino Noir is unplayable. The latest build does not seem to like iOS all that much; played on both an iPhone 6 and a first generation iPad Air, the game repeatedly crashed while attempting to load the opening menu screen, or – on a couple of occasions – even resulted in the iPad needing a couple of soft resets to get going again. Some days it was simply impossible to get the game started on either device, even after restarting several times, making this review a trickier than intended process. 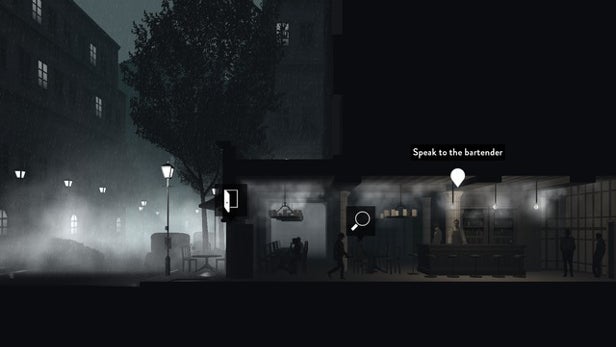 More importantly, however, it makes it hard to recommend Calvino Noir as a purchase as things stand. The combination of consistent crashes and gameplay that feels a little rough around the edges undermines the whole package, and that’s not something that the game’s striking good looks and cutting script can save. All in all, Calvino Noir isn’t that much of a mystery after all – it’s a game that suffers the indignity of being a title that doesn’t seem quite ready just yet, and a release that would have been greatly served by a few more months in development.

Verdict
Stunning to look at, Calvino Noir’s point-and-click adventure sets out with the best of intentions, but sadly a combination of fairly dull gameplay, slightly hacky controls and constant crashes undermine play from beginning to end, making this a game that’s hard to recommend as things stand.