Here’s the story so far. In 2003 Infinity Ward – a new developer made up of much of the team that produced Medal of Honor: Allied Assault for the PC – produce a game that instantly redefines both the WWII shooter and the military FPS as a sub-genre. In 2005 the same developer produces a follow-up that gives us our first glimpse of what next-generation console hardware and high-end PC graphics can achieve. Call of Duty 2 isn’t just visually and technically accomplished; it’s a masterclass in how to orchestrate a fairly linear FPS so that it becomes an almost overwhelmingly immersive and cinematic experience. It sells bucketloads on the PC and Xbox 360, and for about a year becomes the most played game on Xbox Live. 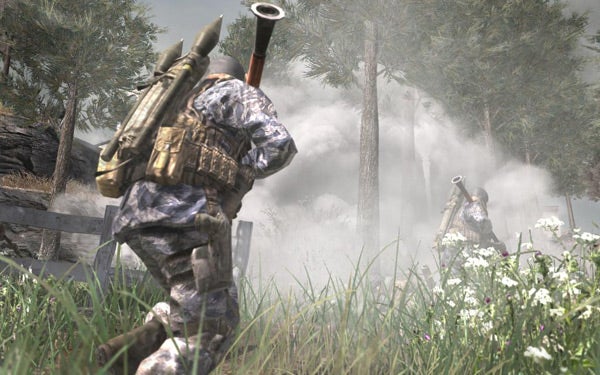 But now the tragic twist in the tale. Infinity Ward and publishers Activision hand over development of a third, Xbox 360 and PS3 only Call of Duty to a second developer, Treyarch. The results are excellent – when you’re playing it online with other players. Sadly, the single-player mode is a bit of a disaster. It still has moments of grandeur and tension, but for the most part it’s unfocused, monotonous and messy. This left us with a couple of questions. Why did Infinity Ward hand over development to Treyarch, and what was the team up to while its beloved series was being mangled? 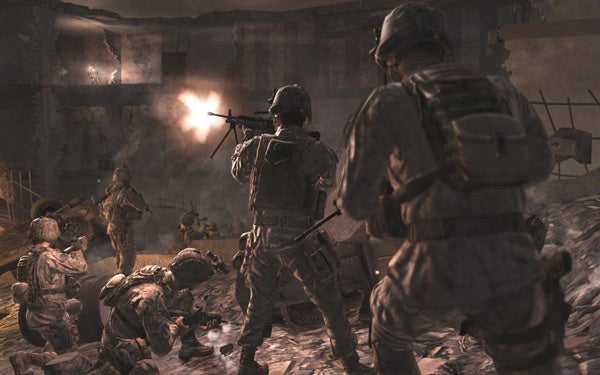 The answer to both questions appears to be Call of Duty 4. If so, then the hours I sacrificed to that game suddenly don’t seem so completely useless. If one poor CoD is the price we paid to get this one, then it’s a price I’m happy to have paid. We’ve known for ages that this was the game where Infinity Ward left WWII behind for contemporary action, but what I didn’t expect was how excellent and different the new game would turn out to be. CoD4 takes everything that’s great about the CoD experience – the carefully staged action, the big cinematic set-pieces, the intelligent squad AI, the awesome sound and graphics – and makes it all work for a different age and a different mode of combat. The effect is a bit like a turbo-charged G.R.A.W. or Rainbow Six, but with all the tricky strategy stuff dialled down and the action turned up to the max.

Let me explain. As in previous instalments, you’re still playing as a soldier within a small squad, following orders and working through each level along a fairly linear path. In fact – barring a few isolated sections – CoD4 is actually more restrictive than CoD3 in this respect. Your job isn’t to be a one-man army as it is in most FPS games, but to do your bit to eliminate the opposing forces and enable the squad to keep pushing through towards the next objective. Sometimes this means being the first one through the breach, sometimes this means hanging back and providing fire support and sometimes this just means standing your ground and blasting each and every bad guy that comes your way. Where CoD4 most differs is in the pace. It’s much more about moving fast, reacting quickly and taking the enemy by surprise than even the fairly ferociously paced CoD2. At times it’s an amazingly frenetic experience. 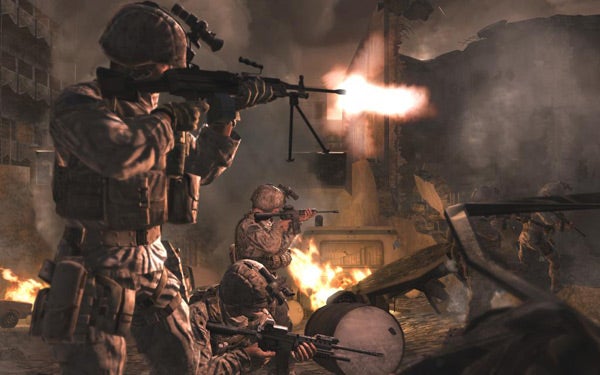 In actual fact, the game delivers several twists along this same basic theme. The plot intertwines a coup in a middle-eastern state with dodgy nuclear activities in Russia, with the former featuring a US Marines operative and the latter starring a new recruit to an elite SAS unit. The Russian stages are generally faster moving and more fluid, while the middle-eastern stages feature more concentrated, large-scale battles. On top of this, the game throws in a couple of air-support shooting gallery sequences and a duo of ‘flashback’ levels that are probably the finest stealth and sniping levels I have ever seen in an FPS game. If monotony of setting and game style was a huge problem for CoD3, it’s never an issue in CoD4. 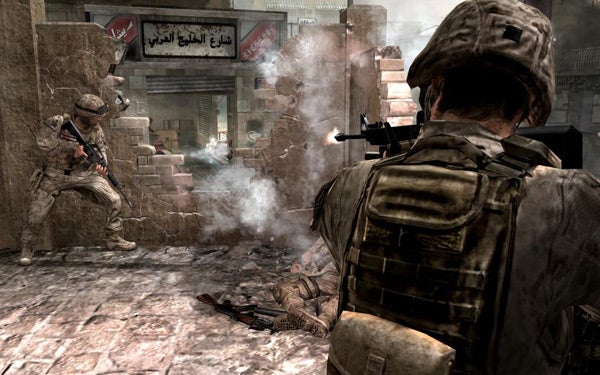 More importantly, the game rarely falters or loses focus when it comes to dishing out the action or the spectacle. The opening on a storm-blasted Russian freighter is dazzling, with superb moody lighting, awesome weather effects and a constantly pitching, shifting environment that threatens to bring on nausea at times, yet the game follows it with scenes of shock and awe that even Michael Bay might think excessive. There’s not much in the way of emergent enemy behaviour – die and you’ll watch the same goons go through roughly the same motions all over again from your last checkpoint – but through smart use of cover and sheer weight of numbers they constantly provide a satisfying challenge. There’s a thrilling selection of long-range and high-powered weaponry to blast them with, while techno toys like night vision, anti-personnel mines and guided missile launchers give the game a meaty modern edge.

I’m really torn here. On one level, I’m desperate to share the best bits with you and give you concrete examples of what I’m talking about, but on another I’d hate to spoil a single, bloody great big moment. Suffice to say, there are bits here where the tension is almost unbearable, bits where the odds seem ridiculously overwhelming, and bits where you’ll be so gobsmacked by what’s going on in the background that you might actually forget who you’re meant to be shooting at. It’s the big gung-ho, all-action war movie of your dreams, except you’re playing it instead of watching it. If CoD2 set the standard for epic FPS spectacle circa 2005, CoD4 does the same for the class of 2007. 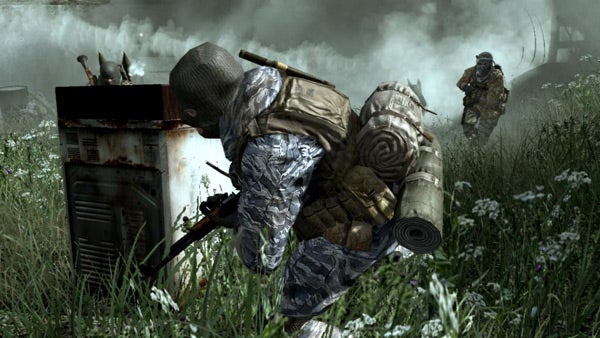 Thanks to a new dynamic lighting engine complete with beautiful HDR effects and some brilliant use of depth of field, it’s a serious contender for the title of most gorgeous FPS on the current console formats (in a different sort of way to Bioshock, of course). The audio, meanwhile, is just magnificent. CoD has always made excellent use of music, chatter and explosive effects to overwhelm the player, and CoD4 is the series at its zenith. If you can play through this game without your pulse racing, then check it carefully – you’re probably dead. 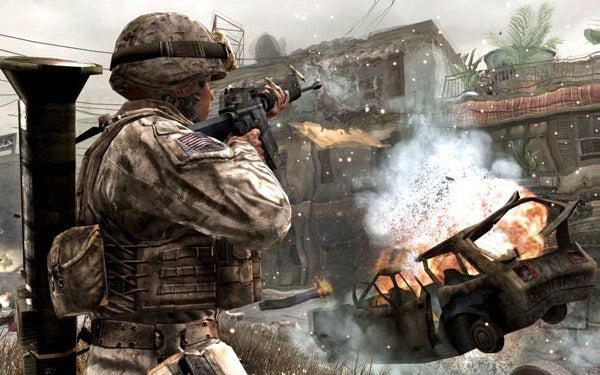 Now, I hate to say it but the game’s not quite perfect. I’m not going to moan about the length of the single-player campaign. The game actually suggests a difficulty level for you after the first tutorial, and if you play it at the right setting then I really don’t think that you’ll sweep through it in the five or six hours some have claimed. Personally, I’d rather have eight to ten hours of ‘all killer, no filler’ than a game of great bits padded out with studied mediocrity. No. My one complaint is more to do with the way that a few of the big action set pieces seem needlessly prolonged. Say hello to an old friend of the modern FPS: those miserable sections you have to repeat over and over again until you finally get a lucky break.

Don’t get me wrong. In most respects, CoD4 is pretty generous. It uses the same health system as CoD2, where you only die if you’re hit repeatedly and don’t take cover, or when a grenade explodes within a few feet of your vitals. However, the fact that bullets can now penetrate walls (depending on their material) and the frequency with which your enemies now employ grenades means that – on a decent difficulty level – you can still come a cropper in a heartbeat. In sections where the game throws gang after gang of enemy troopers at you until you cross a certain line or satisfy certain, unexplained conditions, wading through the same five minutes of combat six or seven times in a row only to get hit by a sniper or blown up by a lucky grenade is a tad annoying. You’ll notice this most when the game keeps you constrained within a fairly tight area as enemies hone in from all around. This doesn’t happen much, but the three or four times it does occur are infuriating. The L33T SK1LLZ brigade are probably laughing, but the rest of us might get very annoyed indeed. 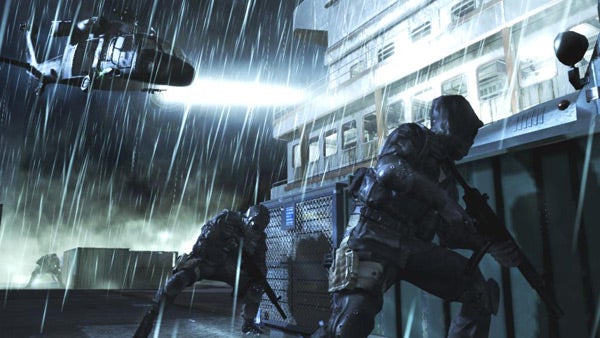 Still, for this one little weakness in the single-player campaign we get ample compensation in the multiplayer options. Thanks to the new arsenal, some solid maps, a good class system and some great rewards – love the helicopter gunship attack – online CoD4 is an absolute blast. The matchmaking facilities on Xbox Live are exemplary, and the game uses a persistent ranking system as its backbone. Cleverly, the more advanced classes, equipment and game modes are restricted to higher ranks, meaning that you can grow your skills and learn the maps in the basic deathmatch and team deathmatch modes before you start having to think about objectives, bombs or HQs. Meanwhile, the most hardcore players get specialized game modes where they can be sure that they’re only playing with other hardcore players. That keeps them somewhere where they’re not beating up and demoralizing noobs, and everyone is happy. Nice work. 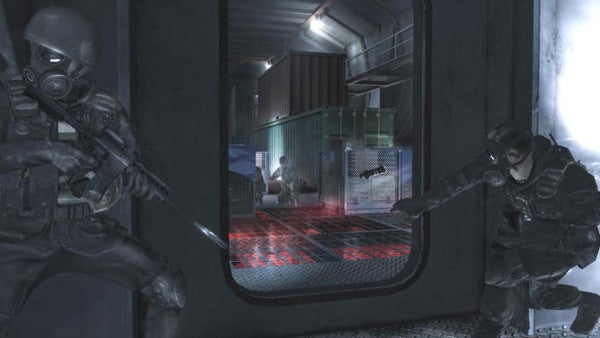 To sum up, it’s more bad news for your already beleaguered wallet. In the best season for FPS games in years, we have another one that should be considered essential for anyone with a yen for the genre. In fact, I’d argue that the more casual gamers who lapped up CoD2 will have a better time with CoD4 than they would with Halo 3 (Heresy!), The Orange Box (Double Heresy!) or even Clive Barker’s Jericho (OK, not much heresy to speak of there). To be frank, I didn’t expect it, but Infinity Ward’s latest has utterly blown me away. Do yourself a favour: buy it and let it do the same to you.


Call of Duty’s switch to the modern era has bought it back to winning form with a blast. Superbly paced and pumped with adrenaline, it’s the all-action blockbuster to beat.