Call of Duty 2 must have been a tough act to follow. For most people, it was the unlikely star of the 360 launch line-up, filling the gap left by the disappointing Perfect Dark Zero and introducing a new wave of console gamers to the sort of next-generation visual effects and rich, immersive FPS gameplay that previously only PC owners had experienced. What’s more, it was a game that even those who professed themselves bored silly of World War II games had to admire, pulling out all the stops as it did to deliver an experience of practically operatic intensity. Nor has it lost its appeal since, thanks to an engaging multiplayer offering. CoD2 became a Live staple at launch, and hasn’t left the top ranks ever since. 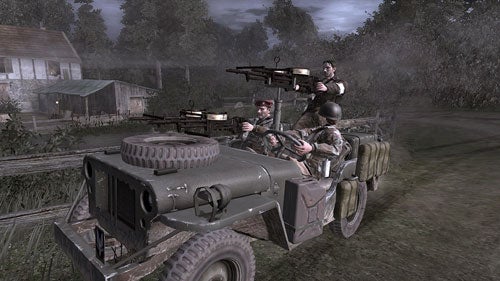 And the sad thing is that Call of Duty 3 hasn’t quite been able to follow it. It’s hard to say whether the reasons are down to a change of developer (Infinity Ward handing over to Treyarch) or a rushed release schedule (it’s been less than a year since CoD2 appeared), but CoD3 certainly feels the lesser game. It’s as if it has been put together by a team having only a partial idea of what made Call of Duty tick; they have mistaken bombast for drama, excess for pace, and quantity for satisfaction. The result is a game that has real moments of brilliance, but that overall is a bit of a disappointment. 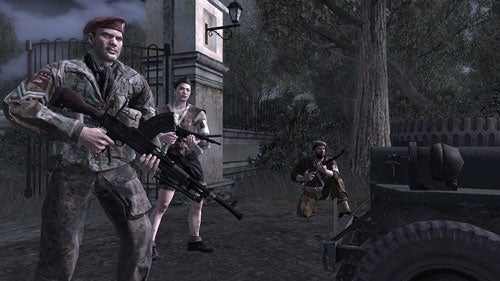 True, the game certainly makes a great first impression, hitting you hard with a showcase assault that shows the enhanced CoD2 engine is no slouch. The textures are as rich, the animation as believable and the smoke, explosion and particle effects as dynamic as they were last time around and – until Gears of War comes along – the weather effects are about the best around. And on top, the game throws in a nice new swaying grass effect, put to great use in a handful of levels. However, as the game moves on the lustre starts to tarnish a little. Is there as much vivid detail in that French farmhouse as there was in the alleys and interiors of the North African towns of CoD2? Is the atmosphere as chilling as it was in Stalingrad? Is there really anything here – swaying grass aside – that we haven’t seen somewhere else before? 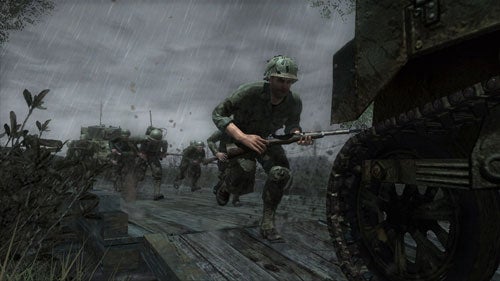 And this brings us neatly to another major issue. Remember: CoD2 gave us three campaigns – Stalingrad, North Africa and the assault on Normandy – and, after the first few levels, allowed us to flit between them. CoD3, however, concentrates on a single campaign: the Normandy breakout that saw the allied forces move from the beachheads to conquer Paris. Now, I can see what Treyarch were trying to do – to tie three stories representing different aspects of the campaign into one coherent whole, so letting you feel the shift from one stage of the invasion to the next – but the downside is a loss of much-needed variety. Simply put, CoD3 feels a little restricted in its palette, and the sad fact is that – for portions of the single-player game – it all gets a bit monotonous. 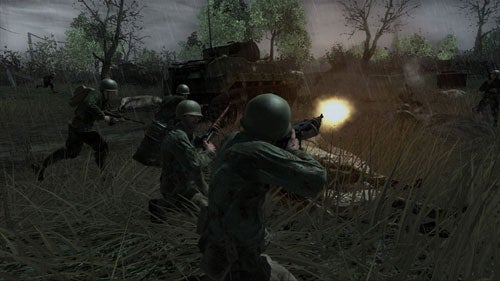 No, wait. There are fantastic moments. Some of the big set piece battles are almost terrifying; it’s hard to know where to go amidst the sheer amount of noise and violence being thrown at you. You find yourself creeping from cover to cover just in order to find time to get your bearings and work out what the hell you are meant to do next. Every now and then Treyarch repeats this trick, and it always works like gangbusters. Then, after an early trough, the game picks up with a thoroughly enjoyable raid on a fuel depot (Nazis and exploding barrels are always an entertaining mix) and a short but thrilling tank-driving section that’s heavy on the big booms and shattered masonry. That’s then followed by a fine level that sees you sneaking through a shady forest, picking off the hun with a sniper rifle while you enjoy the lush vegetation. All good stuff.


However, in-between the good bits come several levels that fall into the ‘same old, same old’ category. Do you really want to keep clearing barns and townhouses of Nazis, working your way up from floor to floor? How do you feel about the prospect of more bunkers to be infiltrated and more AA guns to be destroyed? CoD3’s biggest problem is that there’s a real sense of déjà vu and – worse – the feeling that it was all more fun last time around. 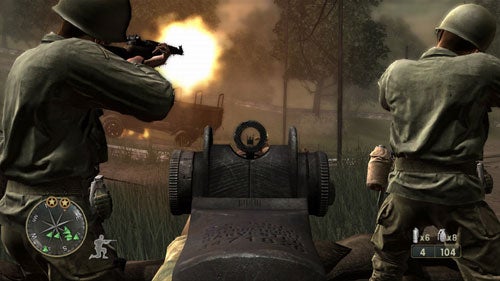 That’s because this year the pacing is off. Call of Duty 2 had more missions (27) and only a few outlasted their welcome. Each one built from a frantic intro, through a few crisis points, swelling towards a big, juicy climax. The action was beautifully orchestrated, and the always tense fire-fights punctuated by some great cinematic moments. There was fear, there was panic, there was adrenaline, there was tension and release. Here there are fewer missions (14) and while they’re longer, they’re not always longer in a good way. The best keep going at a decent lick, but the worst dawdle from objective to objective as if each has a quota of minutes to occupy, but no great need to keep you entertained. A handful drag on interminably, and when stuck for things to do, simply throw wave after wave of relentless Nazis at you. A level near the halfway mark descends into a series of tiresome assaults on a battered factory, with tanks to be destroyed while under constant harassment from regenerating snipers. If I hadn’t been reviewing the game, it would have taken all my willpower not to stop playing there and then. 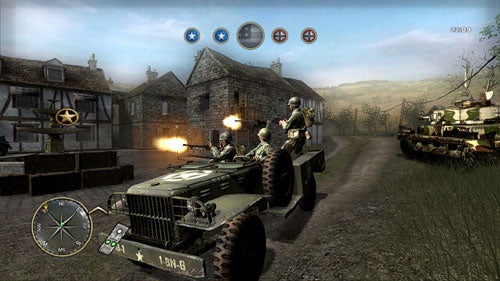 I’m told the AI has improved, and there are periods – particularly on the veteran difficulty level – when the Nazis do seem to be thinking on their feet and doing more than the old shooting gallery routine. However, there are still plenty of occasions when they seem rooted to the spot, popping up every few seconds to take another shot, and there are some bizarre sections in which if you shoot one goosestepper, you can simply hold the sights in place, safe in the knowledge that his comrades will generously step into the same position, ready for the same treatment. Clever? Not exactly. 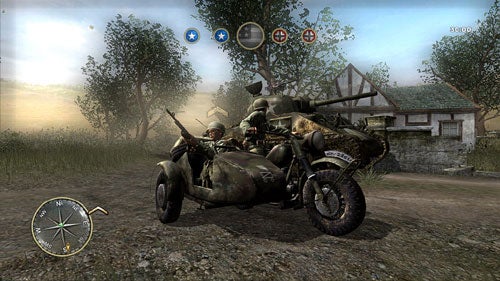 Meanwhile, the much-hyped ‘quicktime’ events don’t really add much to the experience. The sudden hand-to-hand scraps with enemy troops are simplistic and not particularly enjoyable, while the decision to implement a three-step press this, wiggle that routine for every time you set a charge or place a bomb is utterly baffling. It soon gets extremely tired.


All in all, if we were awarding marks for single player only, we’d be desperately scraping for a seven, and lurching horribly towards a six. Luckily, therefore, CoD3 has one huge saving grace: multiplayer. 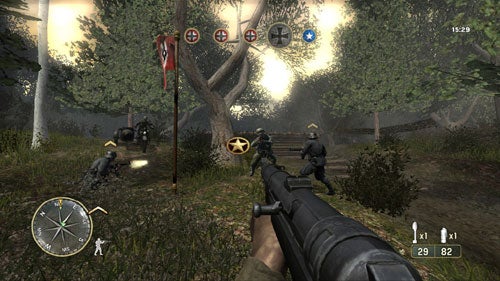 On the one hand, it’s a much more complex, grown-up game than last year’s effort. There’s more of a team focus this time around, support for 24 players, plus a handful of new modes, with old favourites like team deathmatch (now team battle) and Headquarters joined by a Battlefront-style War mode and single-flag Capture the Flag. Better still, we get a working class system, with medics, heavy machine-gun packing support troops and sneaky, sniping scouts on top of the more traditional riflemen and assault troops. Add to this a range of vehicles, covering jeeps and motorcycles to drive around, and we’re really starting to get hot. What’s more, the map design is absolutely superb.


There are scary villages, where the open land between houses and farm buildings becomes hunting ground for would-be snipers and the game becomes a series of tense, who moves first stand-offs. There are some intricate town maps full of back alley shortcuts and menacing windows to keep you on your toes, and an expansive dam level that’s perfect for racing around on a motorcycle, ready to leap into the enemy HQ. It’s not as sophisticated as Battlefield 2: Modern Combat, but it feels lighter, tighter and more immediately enjoyable. In fact, I’m hard pushed to think of a console-based multiplayer offering I’ve enjoyed more. If Activision remembers to support it and keeps adding on new maps and tweaks, I can’t see why it shouldn’t take over from the original as the 360 Live favourite – providing Gears of War doesn’t take the position first. 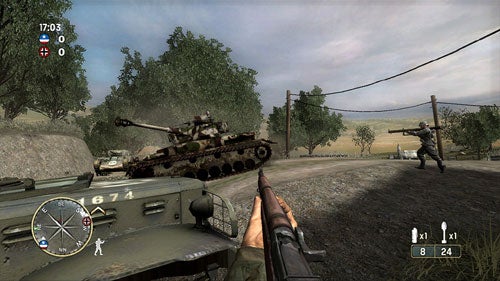 In fact, multiplayer is easily good enough to push the score up by two points to an eight. Bear this in mind if you’re adverse to online shooters or too stingy to pay for Xbox Live – this still isn’t the best game you could buy this month by a long shot. Otherwise, however, it’s a lucky escape from the grip of mediocrity for Call of Duty 3. Next time, Activision, either give us a single-player experience worth of the Call of Duty name, or wait until you have found someone who can.


Single player is a curate’s egg, and while some of the parts are great, some are pretty rotten. Multiplayer saves the day, dishing out a thrilling experience that will keep WWII raging online for some time.