It’s not original, subtle or particularly innovative. It’s not out to provide the most realistic depiction of the war. It doesn’t give you a mass of clever tactical options or open battlefields where you can do things your way. It simply creates the most intense, exhilarating, sometimes terrifying and frequently exhausting experience of combat around. Even now, with my eyes blurred and unable to focus and my ears ringing from the sound of gunfire and grenades exploding, it’s still difficult to believe quite how powerful a game Call of Duty 2 is. 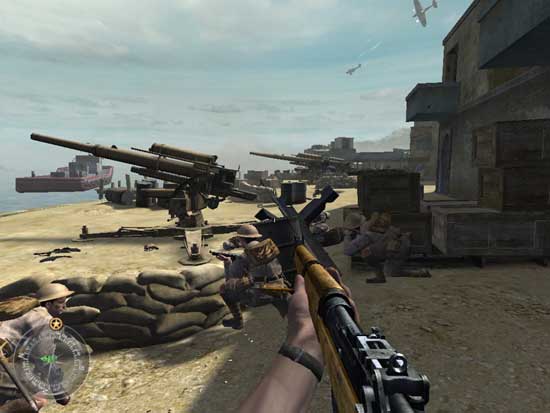 Of course, a lot of its success is to do with the visuals, and you are going to need a beefy system to do it justice, but this is one of those games where the game experience would be unimaginable without the graphics, and the graphics would just be eye-candy without the game experience they’re used to create. Call of Duty 2 looks good in screenshots, but to really understand it you have to see it in motion: the smoke drifting through the stunning detailed environments; the troops half-running, half-crawling from cover to cover; the way the dynamic lighting illuminates details and textures on the uniforms. 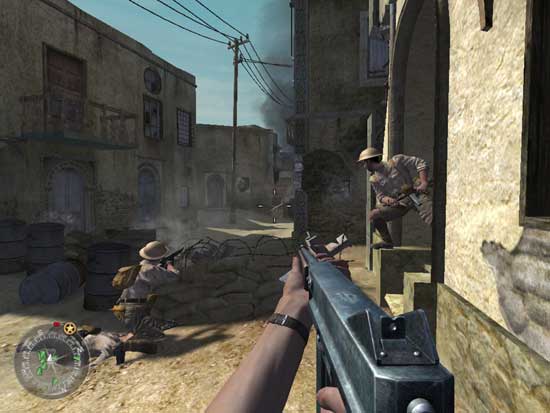 In its best moments – the icy wreckage of the Stalingrad apartment blocks, frantic skirmishes in a desert bunker – Call of Duty 2 has an almost physical feel to it. The way your vision blurs when taking bullets is probably my single, favourite visual effect of the year. And yet it’s effortlessly cinematic too. When a tank rolls over the trench you’re cowering in, or the planes come screaming overhead, you cannot help but be amazed by the sheer spectacle of it all. 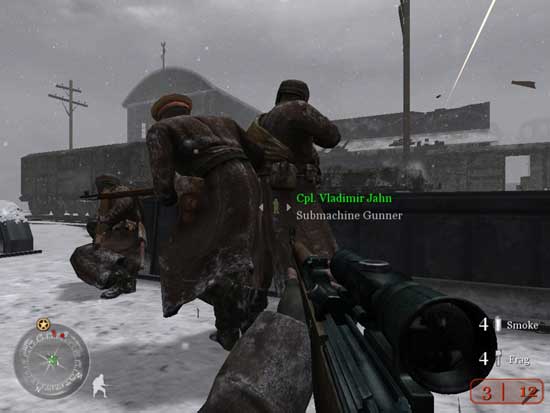 It’s also the audio. Call of Duty 2 is right up there with F.E.A.R. and Half-Life 2 in the ambient atmosphere stakes, from the pounding of artillery in the background to the German propaganda broadcasts in the Stalingrad missions. Then once the bullets start flying it gives your speakers the best workout they have ever had. If the crack and whiz of passing gunfire is at least disconcerting, the rumble of oncoming tanks is the stuff small children’s nightmares are made of. Also, let’s not forget the magnificent surging score, kicking in just when things need a boost, then dropping out to let you concentrate on the action. Nor should we neglect the squad chatter. Where in most shooters, your comrades seem to add in comment just to keep things lively, here they actually say sensible things. Listen, learn, then race in and give those Nazis the thrashing they deserve. 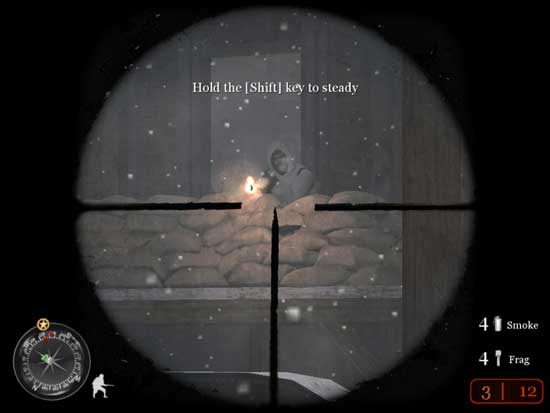 But neither the graphics nor the sound would make this a great game if it all wasn’t so brilliantly orchestrated. Call of Duty 2 effortlessly manages what Medal of Honor has tried to do for years, and what Quake 4 tried desperately to replicate on planet Strogg: create a fast-paced, cinematic experience of warfare that never lets up for a second. The pacing is stunning. Call of Duty 2 throws enemies thick and fast at you, yet it never feels as one-note repetitive as F.E.A.R. or as clumsy and mindless as Quake 4. It’s just a more varied experience. One minute you might be pushing Nazi forces back through the streets of Stalingrad, the next you’re infiltrating a contested station through a narrow pipeline, shrinking back as bullets riddle the metal, the shafts of light marking how near you came to death. Later on there are also some enjoyable if short-lived episodes of tank-to-tank combat, some great skirmishes in North African towns, and a spot of really-extreme rock climbing. It’s not really a case that there’s anything here you haven’t seen before, but have you seen it done so well? Probably not. 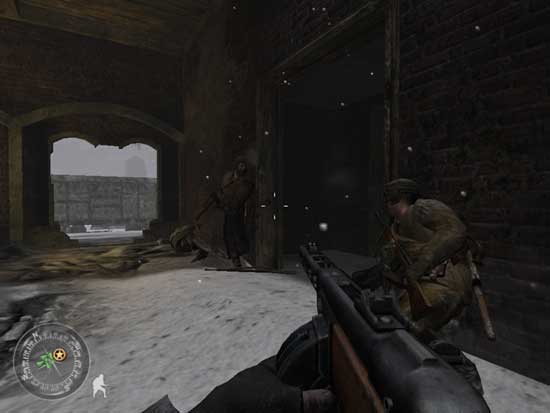 Admittedly, the game does rather lead you by the nose. Some missions give you a choice of objectives, but these basically come down to “should I blow up this place first, or after I’ve blow up the others?” The size of the maps mean it doesn’t quite have the ‘corridor’ mentality of the early Medal of Honor games, but there are times when you can definitely feel the walls keeping you hemmed in.


Still, it’s amazing how well the game prevents you from thinking about this by giving you too much else to think about. As you and your comrades surge forwards, encountering pockets of resistance then falling back to a defensive position, you really won’t be worrying about the lack of secondary objectives or why half the doors can’t be blown open. Instead, you’re just busy worrying about survival.


In this sense, it helps that the enemy AI is pretty good. The Nazis aren’t as smart as F.E.A.R.’s railing-vaulting, always-sneaking-up-behind-you thugs, but they’re fully prepared to charge, reposition, outflank you and grenade you, so if you insist on charging in like its still Wolfenstein 3D, then you’re going to die. A lot. Remember – concealment is you friend, so if you must rush into battle, make sure you use those handy smoke grenades wisely. 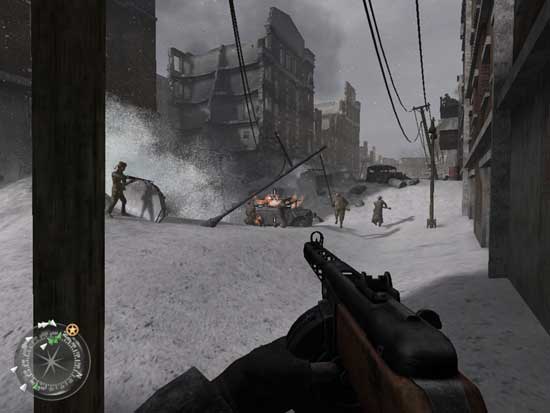 If you’re smart and use cover then you probably won’t die so much. That’s because CoD2 audaciously does away with health, medipacks and the whole quickload/quicksave setup of most FPS games with a simplified system where, if you get hit several times in succession, you’re dead. If you get the “heavily wounded” message in time and make it to cover, then your health regenerates. 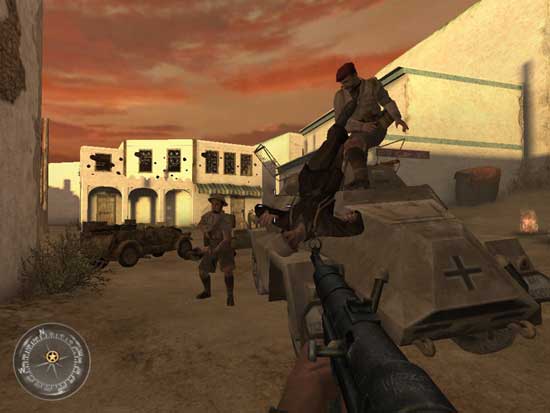 In theory, this should break the game. After all, it gives you a license to blast Jerrie to bits, then run around the corner and snigger while your health builds up. Yet in practice, it does quite the opposite. The mechanism simply keeps the action flowing while encouraging you to make use of available cover and if you’re stupid or slow on your feet, then you’re still not going to succeed. While it lends a slightly surreal touch to the proceedings, is it any less realistic than the ability to reload to a point just before you got your damn fool head shot off? Not at all. In tandem with some well-placed checkpoints, it just keeps you immersed while preventing you from getting too frustrated.


CoD2 even triumphs in multiplayer, with effective Capture The Flag, Deathmatch and Team Deathmatch modes, and its own equivalent of Counter Strike: Search and Destroy. Your relative vulnerability – in comparison to Quake 4 or Half Life: Deathmatch – keeps things tense and thrilling, and the maps are perfect for the sort of ambush and duck-and-cover gameplay the game promotes. 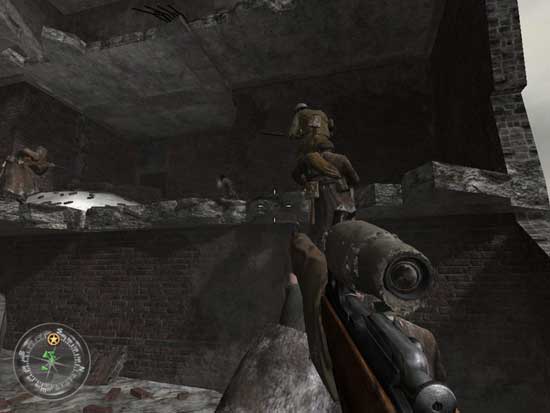 Call of Duty 2 is not going to please everyone. It’s not as sophisticated a multiplayer offering as Battlefield 2, and not as realistic a single-player game as Brothers in Arms (though for me, the latter always felt a bit too hardcore). All in all, however, it’s a fantastic sequel and a straight-up awesome game. Perhaps it doesn’t do anything new, but it does what it does with such polish and breathtaking élan that you can’t really quibble. In an ideal world, this really would be the last word on World War II games, because I really can’t imagine anyone doing it much better than this.


Call of Duty 2 might not quite redefine the World War II action game, but it gives you a damn good reason to fight the good fight one more time. If you want the year’s best first person shooter, this is it.