While it hasn’t had the same level of media attention as the Wii or Brain Training, Buzz! has been one of the big casual gaming success stories of the last few years. If you’ve ever played, you’ll know why. Everybody understands the TV quiz show format and it doesn’t take any nous to work out that pressing the green button on the special buzz controller will select the green answer from the multiple choice selection. Most of all, Buzz! took something that most of us enjoy – showing off your superior knowledge and being incredibly smug about it until family members/friends start making death threats – and made it even more fun with a great cast of characters and some well-designed rounds. It’s great post-pub entertainment, great Sunday night family entertainment, and even good for the kids with the right question packs. 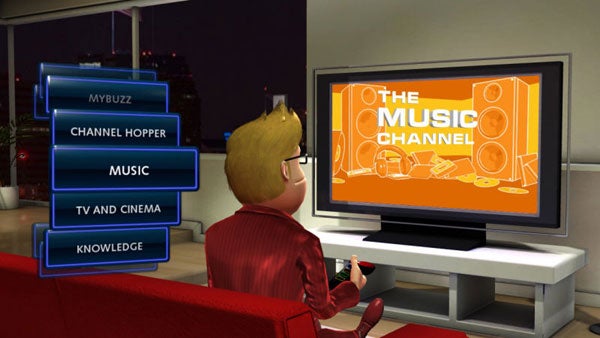 For Buzz!’s PS3 debut, Relentless Software wisely hasn’t tried to reinvent the Buzz! wheel. In fact, it’s interesting to note that, while Microsoft’s ‘Buzz! inspired’ Scene It! Lights, Camera Action took the quiz game into the HD era by throwing in loads of HD movie footage, music and image content, Buzz! Quiz TV has been a lot more restrained. Sure, the cartoon characters that make up the contestants look crisper and have smarter textures and reflection effects for their costumes. True, the studio lighting has been improved and there’s a little more flash stuff going on in the background, but generally speaking Buzz! Quiz TV sticks to a tried and tested formula: primarily text-based questions and multiple choice answers. 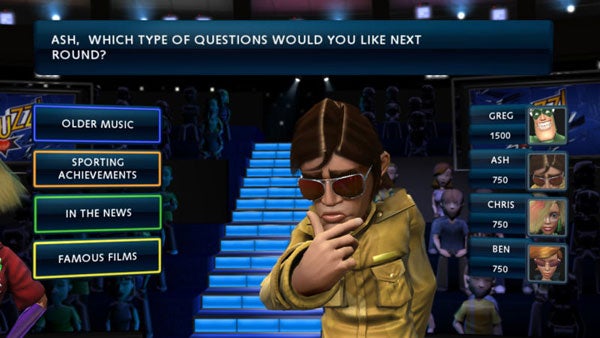 In case you haven’t played, up to four contestants work their way through several rounds, usually presented with some kind of twist. In some rounds you score higher for answering sooner. In others you have to make a bet on whether you’ll answer correctly, winning the staked points if you do but losing them if you fail. In Pass the Bomb you’re answering questions correctly so you can pass a bomb down the line while it runs out of fuse. In another round, getting the right answer first means you can throw a custard pie at your chosen target, draining them of points. Throughout, your compere is Buzz, the ever-eager Australian host, again voiced by Jason Donovan. He’s still a little irritating and repetitive, though the recorded dialogue is the best here that it’s ever been, but he certainly adds to the character of the proceedings. Scene It! seems dishwater dull by comparison.

The difference here is really one of approach. For a start, Buzz! has finally found an ingenious way of making sure that people who want a specialised sports or movie quiz can have it, while providing a mix for those of us who’d rather play a general knowledge game. The whole game now works through a unified TV screen interface, and starting a new single player or multiplayer game takes you straight to a channel hopper that enables you to choose between All Types, Music, Movies and TV, Knowledge, Sport and Lifestyle quizzes. With 5000 questions divided between all those types, there isn’t quite the same depth of question for, say, Music that you’d have found in the old Buzz! The Pop Quiz pack, but Relentless is planning downloadable question packs, so you shouldn’t be left high and dry once you’ve gone through the existing selection. 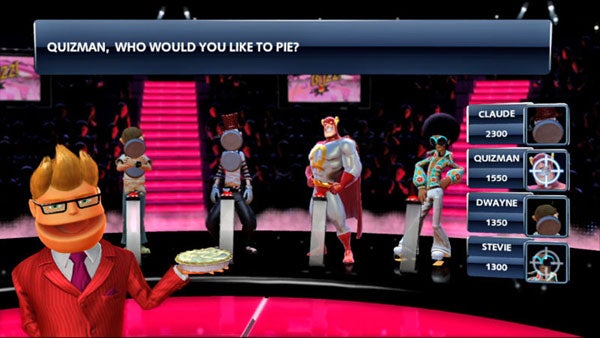 And it’s while you’re looking at the channel hopper that you’ll notice the first of Buzz! Quiz TV’s big advances. Select MyBuzz! Questions and you can start browsing through user-submitted quizzes held on the MyBuzz website (www.mybuzzquiz.com). These are divided into the same categories as the main Buzz quiz questions, then further subdivided so that Knowledge, for instance, leads to Arts and Literature, Geography, History and so on. Cleverly, you can also look for recent or popular quizzes, or refine your search further to cover, say, Comics and Graphic Art. 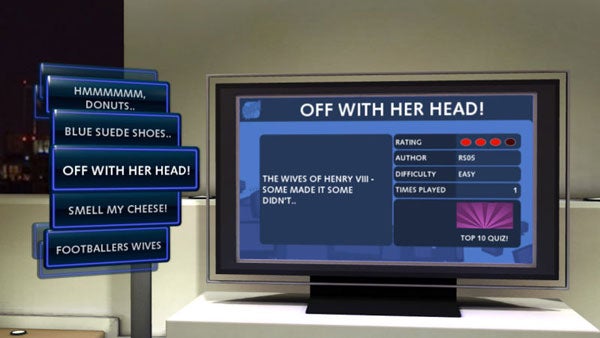 You play through these quizzes, either solo or with friends, just as you would any regular Buzz! Quiz. The main difference is that, for obvious technical reasons, there’s no voiceover for the questions or the answers. It’s early days yet and typical geek subjects make up the majority of quizzes; Star Wars, The Simpsons and video games are everywhere, and questions on literature are more likely to cover Harry Potter than Graham Greene. However, the subject matter is steadily widening as more and more people start submitting, and the fact that users rate each quiz after completing means that, eventually, it should be easy to work out that a quiz that’s only relevant to members of a particular obscure Internet forum is a waste of time, while Merlinpants’ Trick Question quizzes are pretty decent. 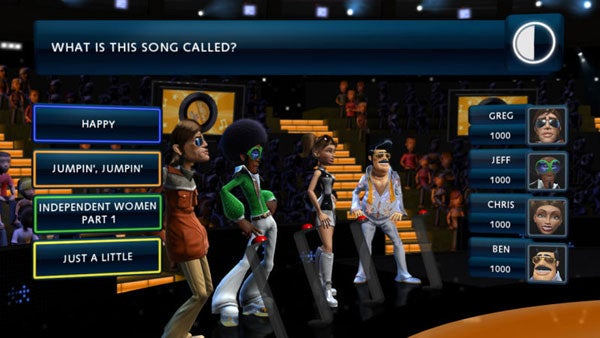 Of course if there’s nothing there you like, you can always create your own. You can log onto the MyBuzz website using your PS3 or an ordinary PC and open a quiz, type in the questions and answers then save it out, ready for others to play it either through the game or through the website. I can see Relentless having some problems with low quality quizzes, incorrect answers or dubious content. You can’t ever stop the morons entirely, but hopefully the ratings system and a very easy reporting feature should help keep the worst of the cretins, pervs and mischief-makers out.

The other major feature is online play – something even Scene It! didn’t attempt. The most impressive thing is how transparent it is; you can setup or join an online game in very much the same way that you would an offline game, and the game takes seconds to find you a quiz to join or players to hook up with yours. There are some irritations – waiting for everyone to choose characters can get annoying after a while – but generally it all runs very smoothly and is more compelling than you might expect. You can see when the other players have answered and, in some rounds, what they’ve answered, putting the pressure on you to perform. As the final rounds commence, things can get every bit as tense as your average online FPS, though the time allowed to answer could possibly have been shortened – some players seem to take an age to make their choice (and with no EyeToy support, it’s impossible to know whether there is any cheating going on). 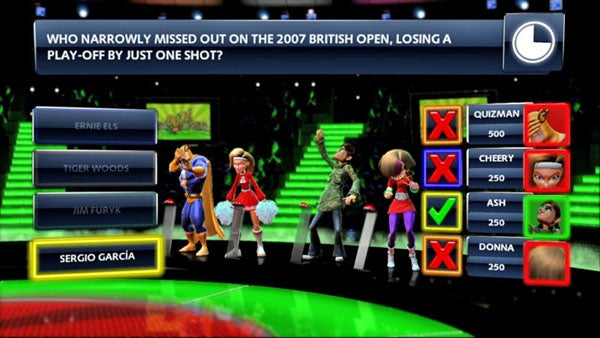 Overall, the online experience is excellent. The only real causes for complaint are that a) there’s no facility to make the game longer or shorter and b) the promise of Sofa vs Sofa play, where a team of players on one console could play another team over the Internet, appears not to have materialised. At the moment, Buzz! Quiz TV seems limited to one player per PS3. Shame. 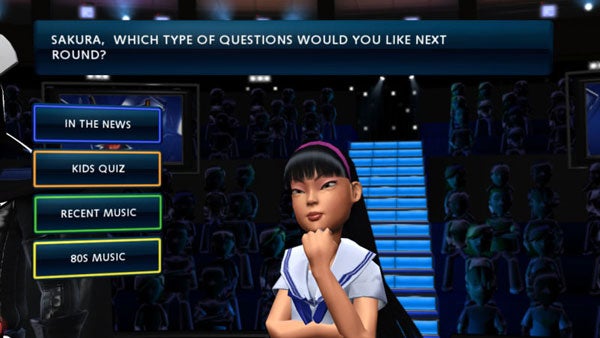 That’s a disappointment, but Buzz! Quiz TV is very much an evolving platform, and there’s plenty of room for features and play modes to be added or adjusted with coming patches and question packs. The important thing is that, as is, the game is massively entertaining and one of the best social experiences on the PS3. And there’s one final reason to rejoice. Now that Buzz! Quiz TV comes with wireless controllers, we can all forget about the nightmare of wire untangling that every Buzz! session used to entail. Cheapskates can still use their existing Buzz! Controller and get the solus version if they wish, but the wireless bundle makes setting up a game much, much less of an ordeal.


It’s not perfect, but Buzz! Quiz TV is the best quiz game out there and one that’s bursting with potential to get even better. The integration of online features is excellent, and while some may be disappointed by the subdued use of the PlayStation 3’s HD capabilities, the core game is slicker and more enjoyable than ever.