So far, in our recently inaugurated camcorder section, we have focused on camcorders from well-known brands which have been in the business for decades. But with the flurry of new camcorder formats in the last couple of years, the market has opened out for devices from companies previously operating in other areas. The busbi Video is one such device, coming from a company previously known for its USB memory sticks. The busbi products are also available from Dixons under the brand disgo. 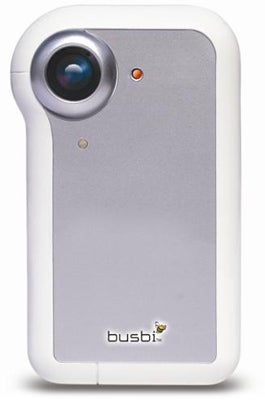 As the price makes rather obvious, this is a video camera aimed at the complete novice hoping to have a bit of fun with video without having to fork out on a major purchase. It’s something you could even buy for a kid to try their hand with. The busbi Video is very simple, with just four single-function buttons, and small enough to fit easily into a pocket. Think of the busbi as being a bit like a camcorder phone without the phone.


There’s not really a lot to say about the busbi’s specification, as it doesn’t really have many features. Since it is aimed at the novice, you simply turn on the power, point, and press the red button to record. There are no settings to configure whatsoever. One of the remaining two buttons simply switches to playback mode, which immediately plays the most recently recorded video on the 2in LCD screen, and then cycles through all the other ones on the storage medium. A delete button lets you remove the currently playing video. 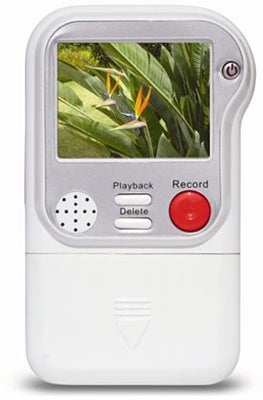 The busbi Video uses SD or MMC cards for storage, and a 1GB card is included. This is enough for around 60 minutes of video. It runs off a pair of AA batteries, which come in the box too. If you need more storage, the SD slot supports cards up to 2GB in size, so obviously isn’t SDHC compatible. However, although the specifications we were sent state that the video resolution can be up to 640 x 480, we found the files produced were actually at 320 x 240, and there was no facility to select a higher setting. Compared to the 720 x 576 of MiniDV, this is a rather lowly resolution. The video is recorded at the US and Japanese standard 30 frames per second, rather than the 25 frames per second which is used by TV in the UK.

With its fixed lens and 320 x 240 frames, the busbi wasn’t going to win any prizes for video quality, except for maybe the wooden spoon. The video is very grainy and full of artefacts, and light sensitivity very poor. In anything other than very good illumination, the video is very dim indeed. This is the Catch 22 for cheap camcorders. The price reaches out to a wider audience – but that audience will often want to record video of social events in poorly lit places, which cheap camcorders are almost always really bad at. The busbi Video unfortunately conforms to this stereotype. It’s really not well suited to dimly illuminated indoor shooting.

The busbi Video offers two ways of watching its results. A cable is supplied for connecting composite video and a singe RCA plug for mono audio. Watching the video on a large TV really doesn’t do it any favours, though. You can see just how low the quality is. Alternatively, you can hook the busbi to your PC via USB. It then appears as a removable drive, allowing you to copy the AVI video files onto your hard disk for editing. 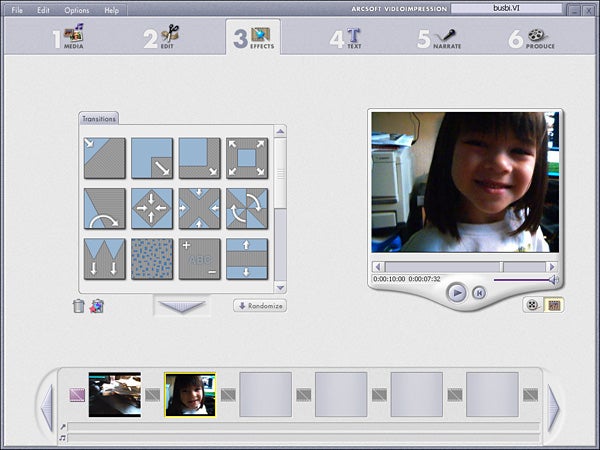 We had no trouble loading the busbi’s AVI’s onto any editing software we tried, although ArcSoft VideoImpression 2 is actually bundled. This is a very simple editing app which guides you through the process using six simple stages. You can bring in video files from the busbi Video’s storage, or capture from a DV camcorder, or acquire from a scanner. The editing stage involves trimming in and out points and applying brightness and contrast. A selection of simple wipe transitions can be placed between clips, and very rudimentary titles added over the top. These can be animated, too. But VideoImpression 2 doesn’t let you add filters to your video, although you can record a narration track as you watch the video.

Output options include creating an AVI, emailing a WMV file, and recording to a DV or VHS camcorder. There’s an option to burn to CD, but we couldn’t get this to work on our test system. So, VideoImpression 2 is a very basic piece of software which doesn’t go beyond the abilities already available with Windows Movie Maker. In fact, the latter actually has some features VideoImpression 2 doesn’t, making the bundled software’s existence rather pointless for anyone running Windows XP or later.


Strangely, the busbi Video also doesn’t come with any drivers to enable its use as a webcam. This is a shame, as bundling a little desktop stand and webcam features would have doubled up its abilities and made it a little more useful. 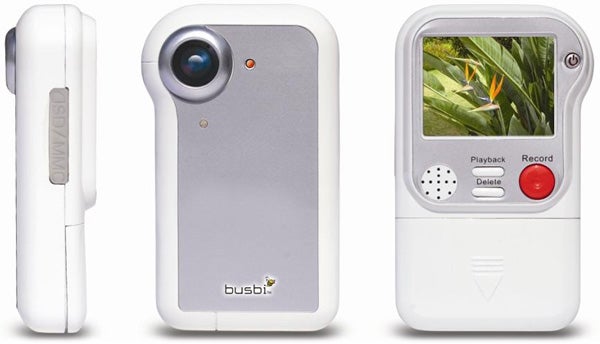 With so many digital cameras and mobile phones now including video recording capabilities, standalone devices need to offer something better, or be very cheap indeed. The busbi Video is very cheap, but it’s also very limited in ability. Big-name flash memory camcorders such as Panasonic’s tiny SDR-S10 do cost quite a bit more, but they also offer useful features and significantly superior video quality you could consider showing to people on a big screen.


The busbi Video is just about cheap enough to make it an impulse purchase for those wanting a quick dabble with YouTube. But for most other requirements we’d recommend saving up a bit more money and choosing something more capable. And if you already have a mobile phone with video capabilities, it’s likely to be at least as good, if not better, than the busbi Video.