There’s a phrase you’ll see at the start of many iPhone games that’s getting more and more popular: “This game is best played with headphones.” It’s a risky approach to take given that one of the great advantages of mobile is that the majority of its games can be played anywhere. In contrast, a pair of headphones aren’t always to hand, and the necessity to wear them by definition makes a mobile game just a little less mobile.

With Burn It Down, however, popping those headphones in is rather important. This is a game where it’s wise to take the developer’s advice – find them and wear them – because without the sounds that wrap around play, Burn It Down is very much a fire without fuel. It really is a different game entirely.

Stripped back of its setting and the aforementioned soundtrack, Burn It Down is a straightforward platformer puzzler, with the idea being to navigate your way through the 40-odd 2D black and white pixel art stages on offer within an hour. Controls are just as simple – at your disposal by simply touching either the left or right side of the screen is the ability to walk. Gain enough momentum and the game’s lead will automatically jump over any gaps in the path, or bounce off any walls he encounters, though all this is automated. 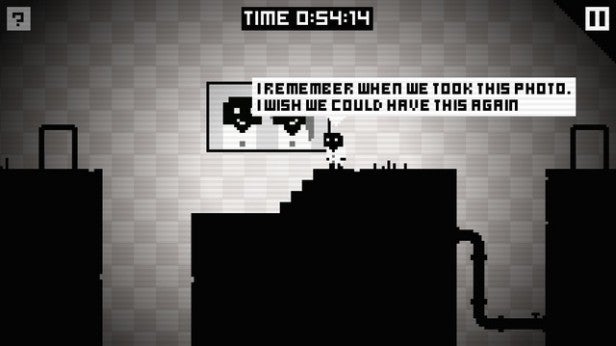 This makes Burn It Down essentially a game of dodge the spikes. Levels, though especially short, are constructed to make you think about how you avoid danger, with pitfalls and spikes typically located in close quarters. Given that the former requires you to pick up pace whereas the latter is all about a deft – and typically restrained – touch, success in each stage is soon a case of knowing just which tactic to apply when, and pulling it off without dying too many times in the process.

Indeed, it’s usually not all too hard to work out what’s required – rather, it’s managing to pull it off that’s the trick. So precise are the stages that deaths are almost expected as you muddle your way through during a first, second or third attempt (and, in fact, if you can’t make head nor tail of what’s required, there’s a “ghost mode” you can access that traces out the ideal path for you), though there is a question as to just how fun even a fruitful run through one of Burn It Down’s stages can be. 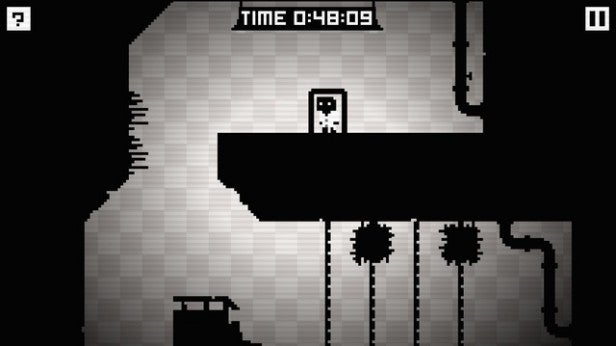 And this is where the game’s audio comes into play. Woven into what could be quite a plain and simple 2D platformer is the story of a missing wife, and your search for her. Along the way, as well as encountering an especially eerie and unnerving soundtrack that gives play an edge that just isn’t present if you’re otherwise distracted. Likewise, the plot (which is typically delivered through the thoughts of the game’s lead, actually read out rather than merely presented on the screen) adds a level of tension and trepidation that you wouldn’t necessarily expect from a 2D platformer.

It’s not unfair, however, to suggest that this feels like a rather odd marriage. While, on a practical level, Burn It Down is a collection of condensed ‘get from A-to-B’ stages, in its pitching you could almost say it aims to be a psychological thriller, with the latter stages of the game playing host to a plot twist or two, as you might expect. In truth, these two elements are never especially comfortable bedfellows – it almost feels like the staging of Burn It Down has been stapled on at the last minute, bringing to life what could otherwise be a fairly forgettable experience. 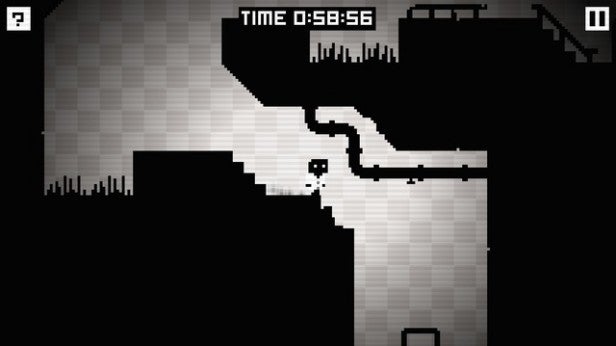 It means that the best word you could use to describe Burn It Down is “strange”, which ironically may be exactly what Tapinator was aiming for. Looking at it through a critical eye, however, this feels like a classic case of style over substance: an undoubtedly intriguing plot and unsettling environment being used to paper over the cracks of what is a fairly tame and unadventurous platformer-cum-puzzler.

Verdict
Don’t be confused by Burn It Down’s rather cute pixel-art stylings, this at its heart is a psychological thriller…until you actually play it, that is, when it morphs back into a cute and cuddly platformer without any great traits or achievements to call its own beyond an especially eerie setting.