The Burg 12 is a multifunction wearable that wants to replace your phone, camera, MP3 player, and any other gadget you can think of, all for only $249.99 (or $199 from Walmart). The problem is that this “jack of all trades” outlook results in it doing only a couple of things well.

Lifestyle designer – and trend forecaster on home decoration and mass-market lifestyle products for companies such as Target and Ikea – Hermen van den Burg is the man behind this line of smartwatch.

The watch wearing his name offers one main selling point beyond telling time: the Burg 12 can make and receive phone calls without the aid of a Bluetooth-connected phone. It comes with a dedicated prepaid good2GO SIM card for $25 worth of texts or talk time.

Armed with a touchscreen interface, the Burg 12 also promises to take photos and videos, record voice memos and messages, organise tasks and contacts, and send and receive text messages. The device attempts to make a smartphone look unnecessary – but in reality, it’s more likely to be a reminder of how much easier those tasks are handled via said smartphone than this wrist-mounted contender. 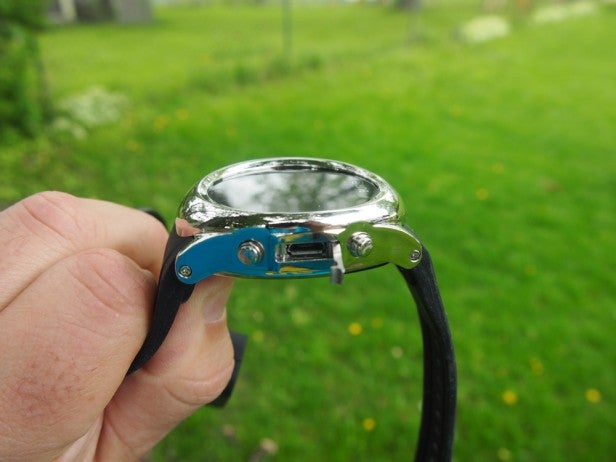 At more than half an inch thick, the Burg 12 feels solid on the wrist – or heavy, depending on your sensibilities. The oval glass face and metallic casing are aesthetically pleasing, but the dimensions and weight make it hard to forget you’re wearing a hunk of alloy on your wrist. The rubberised band – available in black or a dark blue – works well enough, but the very metallic device would have been better complemented by a metal band.

During testing, the sideways profile of the device wreaked havoc with long-sleeved clothing. It doesn’t blend in fashionably or cling to the arm comfortably, so the temptation is to remove it.

Build quality is respectable for a smartwatch costing $200, and it’s rated as impact-, dust- and splash-resistant.

The Burg 12’s engineers deserve some credit for adding a unique touch to their smartwatch that hasn’t been seen in more expensive models. To overcome the device’s postage stamp-sized screen — and the inevitable approach of larger fingertips – Burg includes a telescoping stylus that slips out of a hole just under the watchband’s buckle. It extends from about one inch to just over two and features a plastic tip.

The stylus seems tricky to use at first, as finger tips fumble with what amounts to a small, slippery metal rod. Most won’t even realise that it extends to twice the original length. 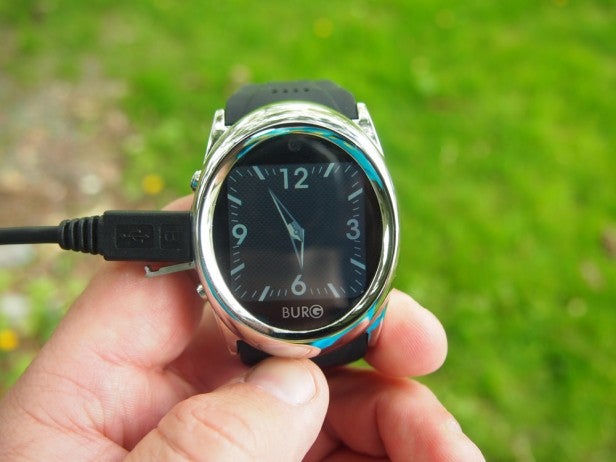 However, with accurate and reliable fingerprinting proving difficult on the Burg 12’s small screen, the stylus does come in handy. Unfortunately, pulling it out and replacing it into its watchband hiding spot is difficult with the buckle closed and the band fixed tightly to the wrist. It’s easier – although not essential – to pull it free with the buckle undone and the watch off the wrist. This is hardly a practical solution day to day.

The watch’s 3.7v, lithium-polymer battery serves as the device’s underside. It detaches from its cradle easily, exposing the slots for the SIM and microSD cards. Burg provides a 4GB card for saving photos, contacts and messages, with the ability to upgrade to 16GB through the use of third-party SD cards. 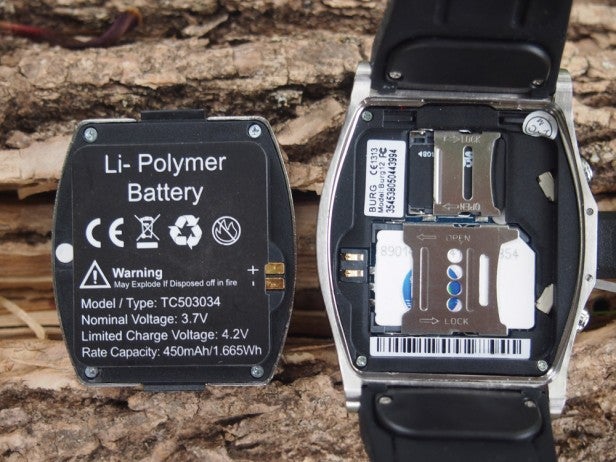 Fortunately, swapping out SIM and memory cards isn’t a daily affair, because replacing the battery to its cradle is endlessly frustrating. It must be aligned perfectly with the battery leads and tiny clip. Even once you’re certain you did that and heard a tell-tale click, it’ll pop off again — making it difficult to figure how much pressure will secure the battery, and how much will break the clip.

The Burg 12 uses two buttons on the left side of the face fixed above and below the Micro USB port used to connect to a computer for downloading date and to charge the device (cable included, but no wall charger). The top button turns the device on or off and hangs up the phone. The bottom button gets more work, as it’s used to navigate through whatever interface menus the stylus can’t handle. It also hangs up a call.

The watch uses an OS unique to Burg. While generally intuitive, there’s altogether too much tiny button pushing and not enough employment of the stylus. The operating system is unknown, but likely the manufacturer’s own. Burg says the battery will last for three days before it needs recharging, and offers about three hours of continuous talk time. 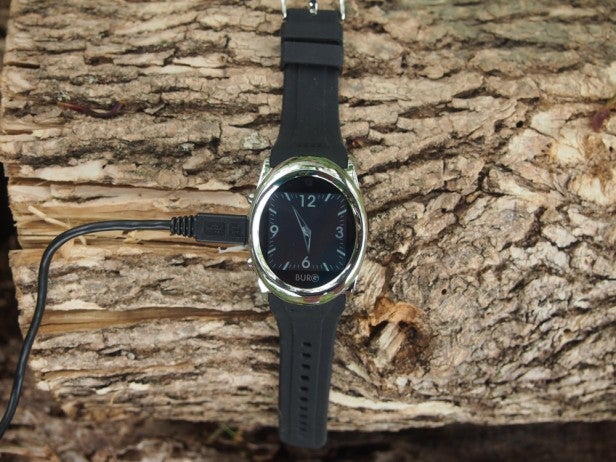 While the watch case is oval, the watch’s color touchscreen is a 1.5-inch square (240 x 240 pixels). The screen’s bright enough for indoor use, but hopeless in strong sunlight. It’s also foggy, giving some of the on-wrist imagery a dated look.

Without the stylus, the screen seems slow to respond and often inaccurate. That could only be the result of adult finger tips trying to work with a 1.5-inch-square space. The stylus helps, but there are bound to be consumers who wonder why they should mess with sticks and buttons when rival devices stay 100% touchscreen.

In addition to telling the time, the Burg 12’s two headline functions are making phone calls and taking pictures.

On the phone front, the good2GO SIM inside the Burg is capable of using the AT&T network on the 850, 900, 1800 and 1900MHz bands. Burg’s own literature on the device indicates different SIM cards can ship with the watch, leaving some buyers to use that $25 gift on another network. Once that introductory SIM is used up, users can swap in another prepaid good2GO or switch to native SIMs from AT&T, Verizon, T-Mobile or other manufacturers.

The smartwatch accepts Micro USB headphones with a built-in mic for phone calls. Such an accessory is absolutely necessary, as the speaker isn’t loud or clear enough to enable phone conversations in the presence of any ambient noise. With headphones, audio quality is tinny with some hiss to overcome, but the watch does function as a phone separate from any other device. 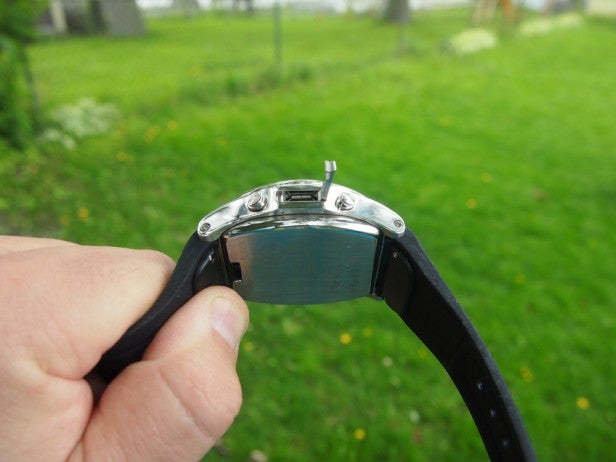 The experience of using the Burg 12’s camera might explain why we didn’t see one in the Apple Watch. When that smartwatch arrived, the absence of any camera frustrated some would-be buyers. Is it possible the Apple designers realised what the minds behind the Burg 12 did not? It’s difficult and irritating to use any camera without knowing what and how you’re framing. You might be able to guess with a little hand/eye coordination, but how often does anyone point his or her wrist at something?

There’s little doubt Burg’s engineers expected the 12’s camera to enhance its appeal. But the quality of the Burg 12’s images is so poor and the process of taking those shots so hit-and-miss, that the Burg might as well not bother. Once the user takes a guess and clicks away awkwardly, the resulting images are hopeless. You’ll notice there are no sample or test images included on these pages. That’s not an oversight. Such an inclusion would be pointless as every attempt yielded a foggy, dimly lit, unfocused square.

That end result isn’t surprising when you try to find out the resolution of that camera — only to discover Burg never released the information.

While the Burg can disappoint in many departments, it does boast surprisingly good battery life. Most brands of smartwatch on the market require immediate and ongoing charging when not in service on the wrist if they’re to remain reliably active while in use. At the very least, overnight charging during a 24-hour period is a must — even for the most advanced and popular offerings from Apple and Samsung.

However, the Burg lasted more than 48 hours at full function on a single charge. Results may vary over time and under different use and conditions. But, as heavy as the Burg 12 is, at least it takes a while to turn it into dead weight. 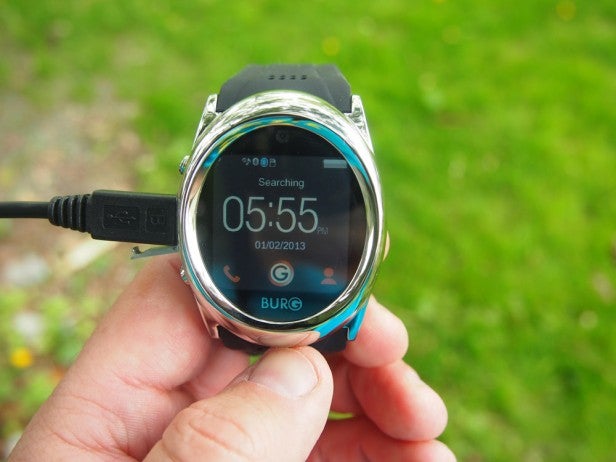 With a price under $300, the Burg 12 looks to max out its functionality at a lower price point than its bigger-name competition. Unfortunately, the only functions that really work consistently are the phone and the actual timekeeping. Unless you’re desperate to talk through your wrist, a smartphone can easily and more consistently fulfill the Burg 12’s role.

It offers an impressive bundle of capabilities, but the Burg 12 only really works well as a timepiece and for phone calls. Hardly puts the smart in smartwatch.