Anti-malware firm BullGuard’s no-logging VPN performs consistently well in speed and streaming tests, as you’d expect from a service based on NordVPN’s VPN network, and did particularly well in this month’s speed tests. It’s not our top choice in terms of security and doesn’t pack in as many features or as endpoints as its sibling, but some of its subscription deals are currently cheaper.

Brought to you by anti-malware firm BullGuard, this VPN service is a white-label rebrand of NordVPN, albeit on what the company describes as its own segregated infrastructure. In practice that means you don’t get as wide a selection of endpoints and performance can differ.

However, it also provides BullGuard with something of a buffer against issues such as a security breach that affected one of NordVPN’s servers in 2018, as well as distancing it from NordVPN’s poor handling of this in terms of disclosure and public statements. BullGuard will benefit from the security upgrades that NordVPN is putting in place to help prevent any re-occurrence of the breach.

BullGuard VPN’s interface is simpler than NordVPN’s and, as such, might appeal to less technically minded users. It also has a smaller, more select pool of endpoint locations and is very slightly more expensive than NordVPN’s offering, with less device support.

The Windows client interface is conspicuously simple, with a range of 16 endpoint server locations listed in a panel on the left that you can connect to with a single click. You can also search by country name or hit the Quick Connect button to connect to the optimal endpoint for your location – usually the nearest.

A top bar allows you to switch between this default Status view and a Settings page. Critically, BullGuard VPN’s settings include an internet kill switch option, which will block all internet traffic if the VPN disconnects. Alternatively, you can just use the app kill switch setting to cut off traffic to specific applications if the VPN goes down.

Other security features include invisibility on LAN, to hide you from other people on your local network, automatic connection on start-up to the endpoint of your choice and custom DNS if, for example, you’d rather use Google, Cloudflare or OpenDNS instead of BullGuard. 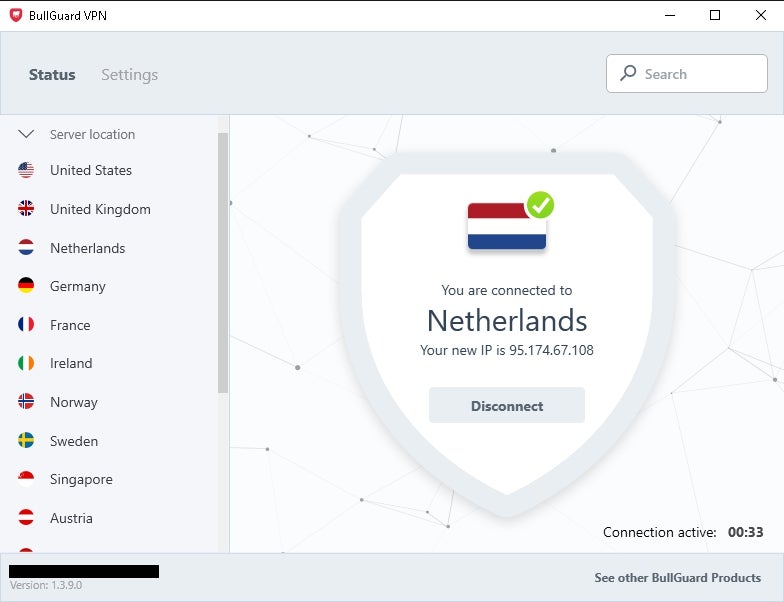 The average HTTP download speeds for the January 2020 VPN group test, measured from a test system in the UK with a high-speed fibre connection, were 81.41Mbps from UK endpoints, 89.42Mbps for the Netherlands and 43.02Mbps from the US.

BullGuard was one of the fastest VPN services on test this month. Its performance in our HTTP and FTP speed tests to UK, Netherlands and US endpoints were all well above the group average, with its cross-endpoint average HTTP download performance coming second only to NordVPN’s.

It didn’t do quite as well when it came to streaming. Netflix US presented no problems and neither did Shudder’s US service and All 4 in the UK. As you’d hope, given that NordVPN works with Disney+’s US service, BullGuard VPN does too.

However, we’ve been unable to reliably access BBC iPlayer using BullGuard VPN for a couple of months now. While you’re unlikely to want to region-shift to the UK from the UK, having to disable your VPN so you can watch TV does no favours to your overall security.

Should you buy BullGuard VPN?

BullGuard is excellent in terms of its overall performance, but it suffers when directly compared to the service whose infrastructure it operates on. For example, BullGuard offers endpoints in just 16 countries, compared to NordVPN’s 29.

At the moment, a two-year BullGuard subscription costs £87.09 compared to £92.21 for an equivalent subscription from Nord. However, BullGuard’s £63.69 one-year rate and £97.49 price per three years are a couple of pounds more expensive. There’s not much in it and neither service is targeting the ultra-budget VPN market.

BullGuard shares many of the advantages of NordVPN but conspicuously only has clients and connection instructions for the most common platforms, so you’d have to do without NordVPN’s best-in-class browser proxy plugin. BullGuard users only get clients for Windows, macOS, Android and iOS, and no OpenVPN or IPSec connection details to use on other devices.

NordVPN, headquartered in Panama, provides an independently audited guarantee that it doesn’t log any information that could be used to identify users, although the addition of UK-based BullGuard’s corporate infrastructure adds some ambiguity to that.

Bullguard and NordVPN were the fastest services in this month’s tests, but NordVPN’s browser plugins and reliable iPlayer support make it a better choice for streaming media fans.

However, although BullGuard says that its VPN infrastructure is separate from NordVPN, there’s still something of a shadow cast by Nord’s latest disclosure of a 2018 endpoint server breach.

If you want a reasonably quick, privacy-focused service that’s had to demonstrate its no-logging policy through legal action against it, our current recommendations are Private Internet Access if you’re on a budget and ExpressVPN if video streaming is important to you and money’s less of an issue.