Bugsnax is a strange, satisfying and utterly engrossing journey into another world – one that's never afraid to embrace its stranger side, even if it means leaving your mouth agape in amazed confusion.

Bugsnax is certainly a surreal way to christen the arrival of PS5, whisking players away into a strange yet whimsical world where your favourite snacks have been transformed into adorable bugs complete with googly eyes and an attitude.

You play as a reporter, who finds themselves travelling to Snaktooth Island in search of disgraced explorer, Elizabert Megafig. Upon arriving at the unusual landmass, you lose control of your boat and have no way to return home. So, the only option is to start exploring, piecing together the mystery that surrounds this land.

After taking a few curious steps, I stumbled upon a fuzzy creature in the throes of unconsciousness, mumbling that he needs to munch on a Bugsnax if he has any hopes of survival. He handed me a trap and sent me on my way, and within a matter of moments I had set up the contraption to catch my very first Bugsnax.

With an anthropomorphic strawberry in tow, I hurried over to Filbo (that’s the unconscious fellow) and stuffed it right into his awaiting maw. To my horror, seconds after ingesting the Bugsnax a fruit sprouts from his arm, the organic material of the alien creature replacing his very own. 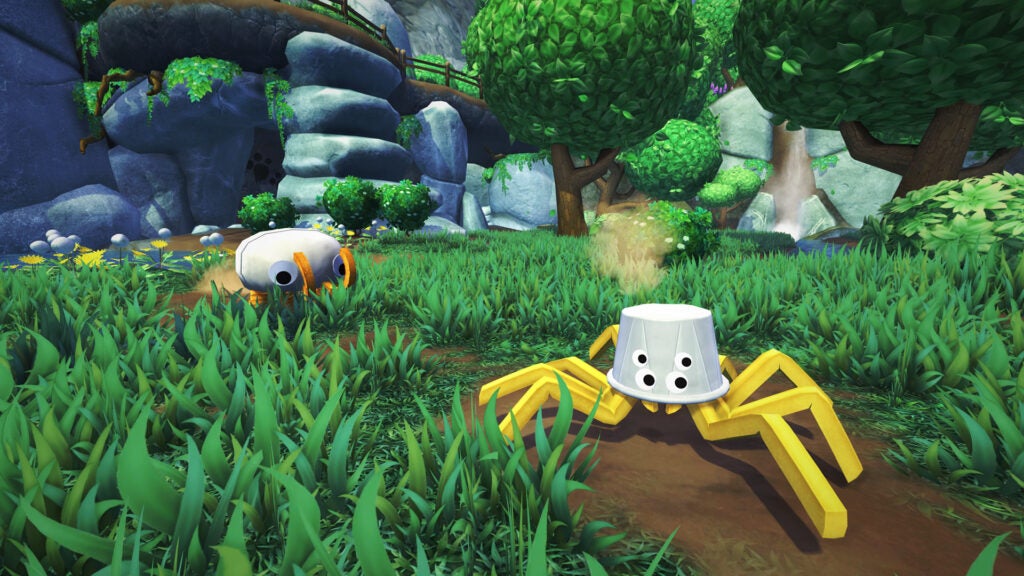 He sounds delighted, craving more before handing over another gadget I can use to gather the unusual animals. In over my head, I simply agreed and went about gathering even more Bugsnax. But now I had a camera, and with the press of a button I could scan the environment to learn about the weaknesses of each creature, learning exactly how I could go about catching them.

After completing a further handful of tasks, Filbo is up on his feet and we’re on our way to the town of Snaxburg. Previously a hub for Grumpuses and Bugsnax alike, this adorable little town has been left to rot in the aftermath of a horrible disaster. Filbo is predictably tight-lipped about everything, so it’s my job to find the missing inhabitants and bring them back into the fold.

This is where the true Bugsnax experience begins, and you’re given free rein to explore Snaktooth Island in search of new friends, new bugs and new clues as to what happened with Elizabert Megafig. The island is split into multiple areas, each of which houses its own climate and selection of Bugsnax to be caught and befriended. 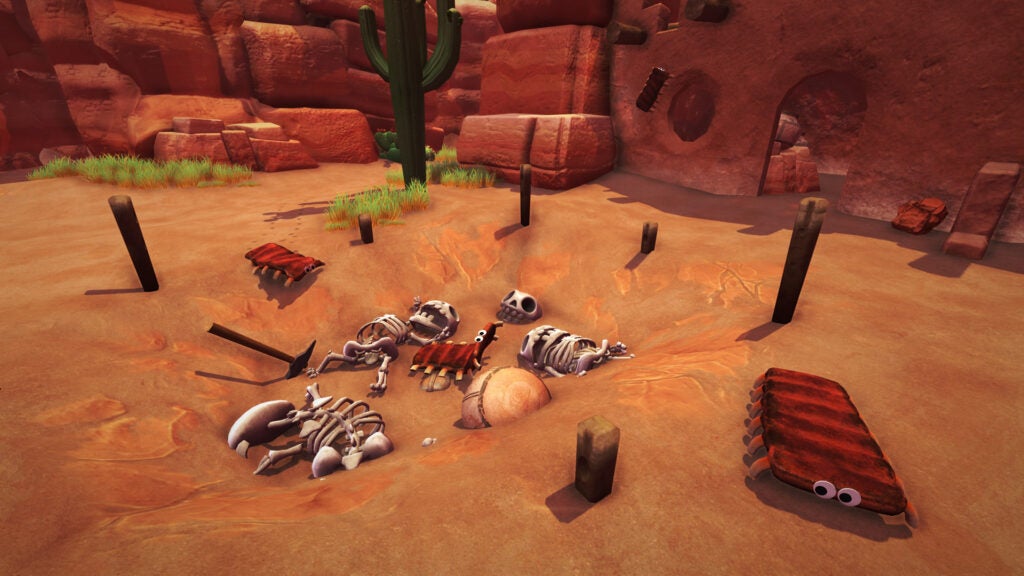 Each new stage brings characters with whom you can interact, each having their own playful personalities that are on full display as you complete objectives that will slowly tempt them back into the arms of Snaxburg. Beffica Winklesnoot is a bossy girl who immediately labels you “her bestie” while trying to conjure up gossip on fellow townspeople.

Gramble Gigglefunny refuses to eat Bugsnax, instead choosing to adopt them and keep them in the town’s makeshift barn. This inevitably leads to some messy confrontations. You’ll also help mend broken relationships, with the absurd names and appearances of Snaxburg giving way to some genuinely human stories of connection.

Occasionally, you’ll gather around the campfire alongside all of the fellow townspeople in sequences that push the core narrative forward, offering ample opportunities for them to interact, showcasing equal measures of conflict and resolution. Something awful drove these people apart, and slowly but surely, helping them come back together is genuinely heartwarming.

But Bugsnax also makes it clear that relationships are never perfect, and you’ll sometimes have to live with the consequences of your actions. Outside of the great story and evolving hub area, Young Horses has created an engaging experience that feels like an unorthodox mixture of Ape Escape and Animal Crossing. 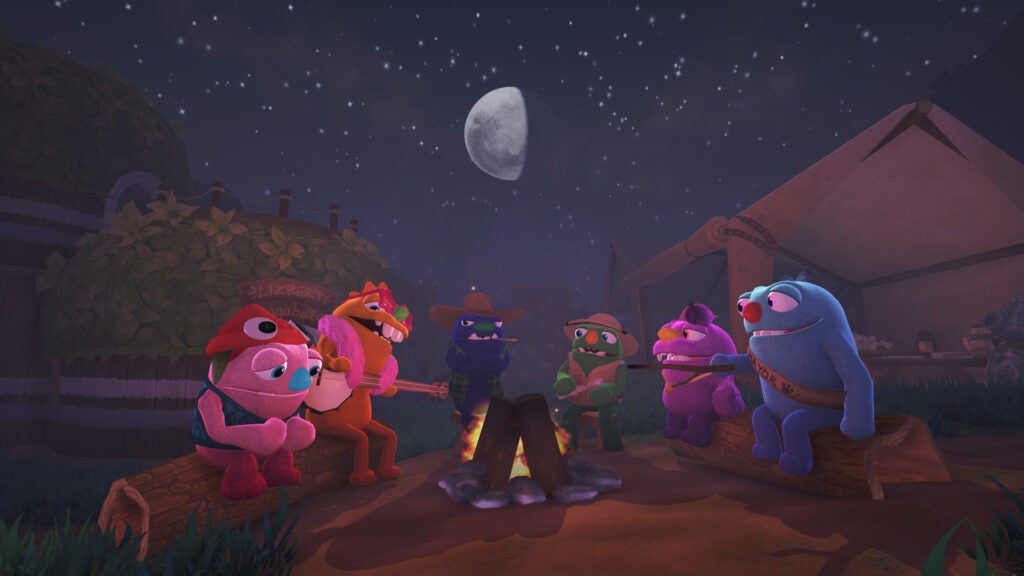 The core premise of each area is to discover its selection of Bugsnax and the way in which they exist within the established ecosystem. Many creatures will interact with one another, either in fear or curiosity while stumbling around making a mixture of charming noises. I’ll never get over how awesome the Borgar is, bounding around like an excitable puppy – except he’s a burger.

You’ll often need to force different Bugsnax to interact in order to catch them, such as forcing a Jalapeno Scorpion to light Popcorn Bugs on fire, causing them to explode into corn and right into my grasp. Angrier Bugsnax can be lured into more timid ones, knocking them unconscious for a few precious seconds – just long enough to scoop them up with a net.

Once you’ve figured out the routine of each Bugsnax, catching them is rather trivial. You’ll often need to discover their favourite sauce from a selection of ketchup, chocolate, hot sauce or peanut butter, spreading it throughout the environment in the hope they’ll walk into your trap without noticing a thing.

Some capture techniques are far more complicated, requiring you to combine several different skills and gadgets alongside a keen sense of timing. Speaking of gadgets, each new stage will introduce a number of trinkets that are perfect for capturing Bugsnax. It’s a shame that the trial-and-error nature of capturing certain bugs can prove frustrating, since it’s often a matter of the physics system playing nice instead of relying on your own skills. 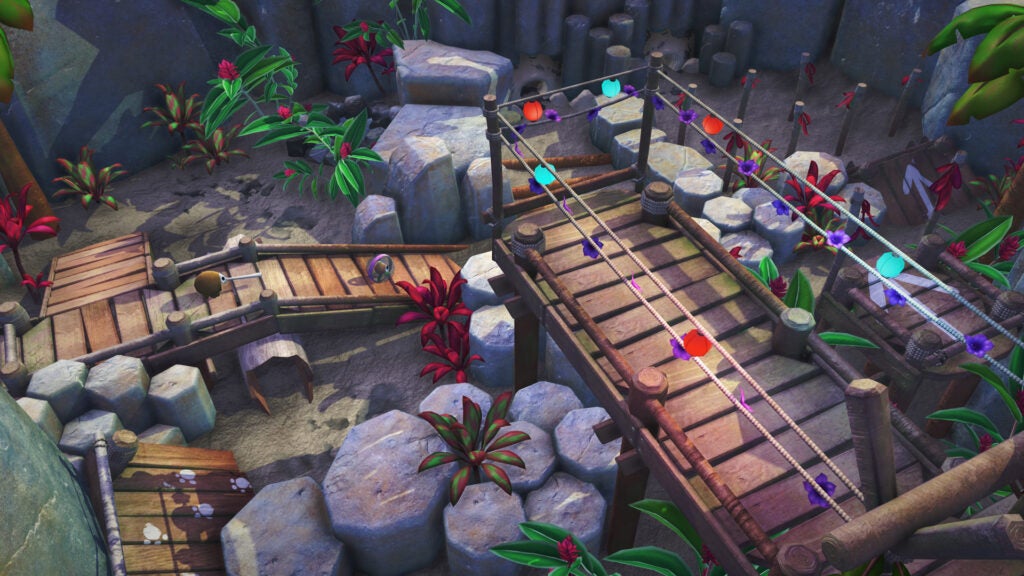 A launchpad allows traps to be fired into the air, allowing for some aerial captures that are exhilarating to pull off. Hookshots and Suction cup launchers are a few other examples of tools that will become part of your arsenal across the campaign, all of which gel wonderfully with the basic fundamentals of capturing Bugsnax. My personal favourite is a strawberry housed in a hamster ball, which can be encouraged through obstacles with the help of a laser pointer.

Given you’re a journalist, back in Snaxburg you can interview each new occupant about who they are, what they do and whether or not they know anything about the disappearance of our intrepid explorer. These will often lead to valuable clues and additional side missions, which help flesh out the engaging narrative.

You’re also provided with an excuse to revisit old areas with new gadgets, opening gateways to plentiful secret areas. While the core campaign isn’t especially long, it provided more than enough standout moments to leave me feeling satisfied. Filling out my journey will all the Bugsnax facts was also a joy, something I felt compelled to do despite the minimal rewards. 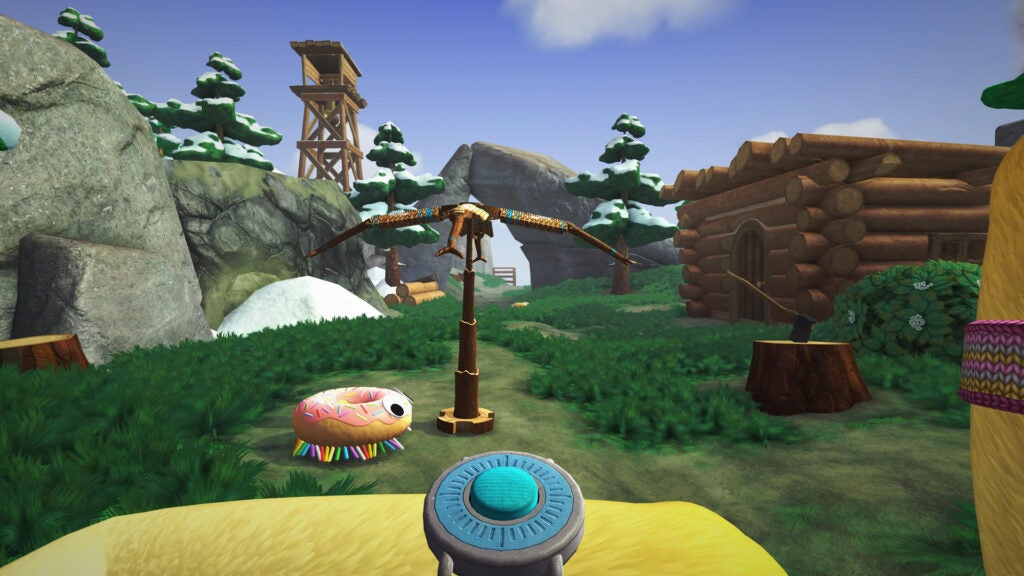 Bugsnax has a sweet, queer relationship at its core, which is treated as normality even in the absurd world that exists within. This is the sort of representation I love to see, instead of it being parading around like a rare exception; it’s simply how things are. Interacting with the characters is where Bugsnax truly shines, even if the act of capturing its obscene cast of creatures is beautifully enjoyable in itself, this is a game with a surprising amount of heart.

Young Horses also makes creative use of the DualSense controller on PS5. The haptic feedback vibration reacts each time you break into a sprint, while the act of snapping pictures with your camera is relayed through a sudden sense of pressure in the adaptive triggers. These small implementations make the overall journey far more immersive, which I hope becomes commonplace as we move into the new generation.