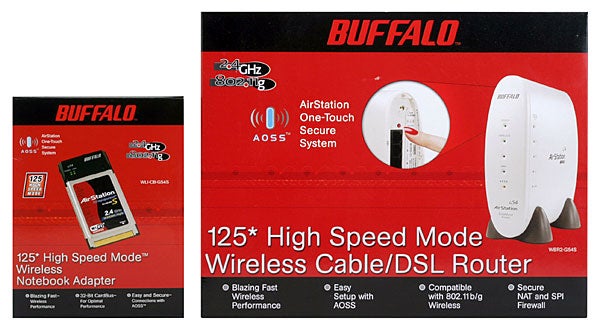 You may remember a few months ago we took a look at the Buffalo wireless router and its unique approach to security. The Buffalo security system, dubbed AOSS (AirStation One-Touch Security System), proved to be a simple and straightforward measure that even the most basic computer user could implement. Well, once again Buffalo has proved that computer technology moves faster than any other industry because just two months later Buffalo has released an upgraded version of its router. 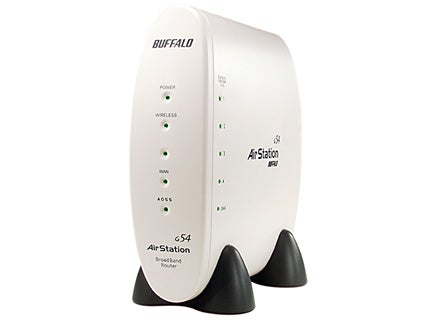 So what has Buffalo done exactly? Well, on the outside we appear to have an identical version of the WBR2-G54: same retro radiator-esque appearance and physical dimensions – 7.6 x 15.5 x 17cm (WxDxH) – and internally the same AOSS wireless security system, which to recap works by automatically detecting and configuring all the security settings for the products it connects to with the touch of a single red button on the back of the router. Aside from AOSS, the router also carries support for WiFi Protected Access (WPA) currently the highest wireless security standard, Temporal Key Integrity Protocol (TKIP), and the older 64 and 128bit WEP standards in case you want to incorporate any existing wireless products into your network that do not support AOSS. So far no change. 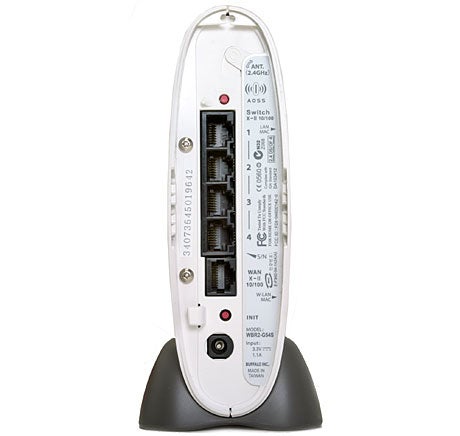 Where things get interesting however is in the boosted wireless performance for the WBR2-G54S and the 125* in its name. Let me make one thing clear at this point, 125* is not the same as the proposed 125n standard which hopefully will be authenticated next year. Instead it is a propriety upgrade based on 54g where the signalling rate has simply been upgraded to 125Mbit/sec. This is an important difference. Ultimately, unlike 125n which will look to double the real world performance of 54g from roughly 22Mbit/sec to 45-50Mbit/sec, 125* falls in between the two standards with proposed transfer rates of up to 34.1Mbit/sec.


So while 125* may not be the real deal, it does still equate to a potential gain of up to 50 per cent on 54g which is not insignificant should you transfer a lot of files over your wireless network on a daily basis.

Now theoretical increases are all well and good, but how it translates in actual testing is of far more importance. To ensure accuracy, we used the same 58.4MB MP3 album and 350MB AVI file under the exact conditions we tested the WBR2-G54 in September and then ran these files between the WBR2-G54S and its counterpart 125* WLI-CB-G54S CardBus laptop card.

Results were good if slightly short of Buffalo’s claimed 34.1Mbit/sec speeds. For example, at two metres away without encryption the album took 20 seconds to transfer, a speed of just over 29Mbit/sec, which fell to 24 seconds under both 128bit WEP and AOSS. Moving the router and the CardBus card apart one floor increased times to 21 (27.8Mbit/sec), 26 (22.5Mbit/sec) and 27 (21.6Mbit/sec) seconds without encryption, under 128bit WEP and AOSS respectively. These were gains of around 30 percent on the WBR2-G54. 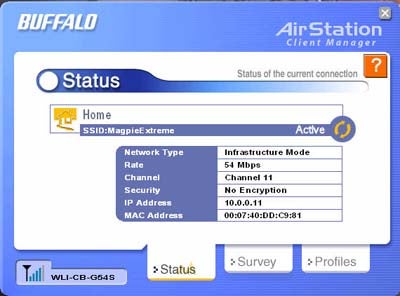 Transfer rates did improve however with the larger AVI file. At two metres without encryption it copied across in 112 seconds or 31.3Mbit/sec, one floor away this dropped to 124 seconds but still retained an admirable rate of 28.2Mbit/sec. Encryption slowed the transfer only slightly with WEP enabled producing times of 119 (29.4Mbit/sec) and 131 (26.7Mbit/sec) seconds at ranges of two metres and one floor apart, while AOSS impressively had almost no further impact on times clocking 122 (28.7Mbit/sec) and 136 (25.8Mbit/sec) seconds on the same distances. So while the figures do not quite match up to the maximum 34.1Mbit/sec speeds quoted by Buffalo, larger files still represent an increase of up to 40 per cent on large files. 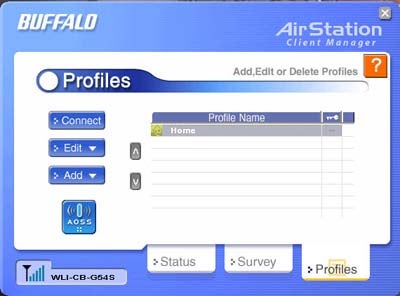 Are these improvements worth splashing the cash? Well, if you transfer a lot of files across your network the answer is most certainly yes, but bear in mind the router’s price of £89.99 is as much as a WBR2-G54 bundle which includes the router and a WLI-CB-G54A CardBus card. Throw in the hefty £49.98 asking price for the 125* CardBus Card and you are looking at a far more significant layout. Prices may drop in future when bundles become available for this product but currently there are no similar deals on the web like there are for the WBR2-G54.


Of course being almost identical to the WBR2-G54 means the WBR2-G54S is still a superb router and the high transfer speeds will bridge the gap for many high data transfer users until the proposed arrival of 125n, but for the average punter the WBR2-G54 offers better value for money right now.


Buffalo’s 125* technology gives its excellent range of AOSS routers a nice performance boost. The heavily increased price of the WBR2-G54S makes it less of a bargain than the WBR2-G54, but if you want the convenience of simple yet top notch security for your network and regularly transfer a large amount of files then the best just got a little better.