In an effort to appeal to a wider market we’re now seeing a number of desktop storage vendors packaging their main products in rack mount chassis. Netgear got the ball rolling last year with its excellent ReadyNAS 1100, Thecus dived in a little later with its 1U4500 and now Buffalo joins the club with its latest TeraStation Pro II Rackmount.

This move makes perfect sense as we’ve watched a lot of smaller businesses dropping compact rack cabinets into their offices to reduce floor space wastage. The Rackmount appliance fits a standard 19in rack and although it’s built well enough Buffalo’s design bods haven’t been overly clever; as although the chassis supports no more than four hard disks, it is 2U high – most four-bay rack appliances, or servers for that matter, are only 1U high.


The main reason for this extra height is undoubtedly the large LCD display in the centre of the front panel, which can show the status of the hard disks, the type of RAID array and the IP address of the appliance. From the management web interface you can change the brightness of the display and let it cycle through the various settings. Usefully, the front panel and disk drives behind can be secured against wandering fingers although the power button is left unprotected. 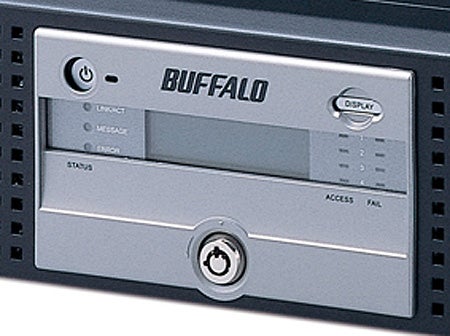 The Rackmount is identical in the hardware department to the desktop TeraStation Pro II as it also sports a 500MHz Marvell Orion SoC (system on chip) partnered by a modest 128MB of SDRAM memory. The system on review is the 1TB TS-RH1.0TGL/R5-1 version that came equipped with a quartet of 250GB Samsung SATA hard disks. Note that although the hard disk carriers are removable they’re not hot-swappable. Instead, Buffalo uses a quick swap feature where the drive carriers have a combined SATA/power connector cable which must be unplugged manually from the rear of the drive.

Buffalo advised us that if a drive fails the unit must be powered down before it can be replaced. Buffalo offers a next day replacement service and the new drive arrives complete with carrier. It’s not as elegant as true hot-swap but the process of replacement won’t take too long as it’s completely tool-free and once the new drive is in place the appliance will automatically rebuild the array.


Buffalo’s NAS Navigator takes light work of installation as it finds the appliance on the network and helps with initial setup. You have a good choice of array options as with four drives you can go for RAID-0, -1 -10, -5 or JBODs and the appliance supports two separate arrays so you could have a couple of dual-drive mirrors instead. Bring a good book when creating an array as we found a four disk RAID-5 array took over seven hours to build.

The appliance supports Windows, Linux and Macintosh clients whilst security extends to a local user database along with NT authentication and Active Directory support. We found shares easy enough to create and we could allow global access for specific users and groups and decide whether each could have read only rights or full access. The appliance also functions as an FTP server and during share creation you can decide, individually, which ones are to be made accessible.

There are plenty of backup options as data can be copied across multiple TeraStations on the network using a scheduler that manages up to eight differential or full backup tasks. Workstation backup gets a boost as Buffalo has given its elderly Easy Backup utility the elbow and replaced it with a single user copy of Memeo’s AutoBackup software. This supports a larger range of backup destinations, offers optional backup encryption, and after the first full backup has run will only secure file changes or new files using an agent that runs permanently in the background.

Buffalo scores well for performance as we ran the Iometer utility on a share mapped to a Boston Supermicro dual 3GHz Xeon 5160 system running Windows Vista where it reported a raw read throughput of 39MB/sec. General file copy speeds were good with copies of a 690MB video clip returning 19.2MB/sec and 15.5MB/sec read and write rates, respectively. The appliance’s FTP capabilities are nothing to sniff at either as the FileZilla utility reported upload and download speeds of 25.3MB/sec and 15.2MB/sec.


No doubt the biggest competition in this space comes from Netgear’s rack mount ReadyNAS appliances and we reckon your choice will come down to the features you want. The ReadyNAS is more consumer-oriented as it offers a wealth of streaming services including a Firefly media server that provides iTunes services and allows you to create internal smart playlists. Its backup features extend to volume snapshots and it includes a five user version of EMC’s Retrospect Professional, making the ReadyNAS better value.


The new TeraStation Pro II Rackmount looks just as good value as its desktop partners and it’s a fine performer as well. It does offer a good choice of RAID arrays and general storage features but we think the Netgear ReadyNAS rack systems are better built and designed, and offer more for your money.

(centre)”’Buffalo’s installation routine discovers the appliance and offers to map shares for you.”’(/centre)

(centre)”’The TeraStation offers plenty of RAID options and supports up to two separate arrays in the same appliance.”’(/centre)

(centre)”’Plenty of access controls allow you to easily decide who can use the appliance.”’(/centre)

(centre)”’The appliance can manage its own scheduled backup tasks and copy data to another TeraStation.”’(/centre)