Buffalo has traditionally had a very strong presence in the desktop Network Attached Storage (NAS) market with its TeraStation products offering a good range of storage features for the price. It now turns its not inconsiderable gaze on IP Storage Area Networks (SANs) with a view to delivering an iSCSI appliance for small businesses.


Historically, IP SANs have been aimed more at larger businesses looking for a more cost-effective alternative to expensive fibre channel SANs and these types of appliances have commanded a high price when compared to standard NAS appliances. The latest TeraStation Pro II iSCSI aims to provide the same services but at a much more affordable price point. 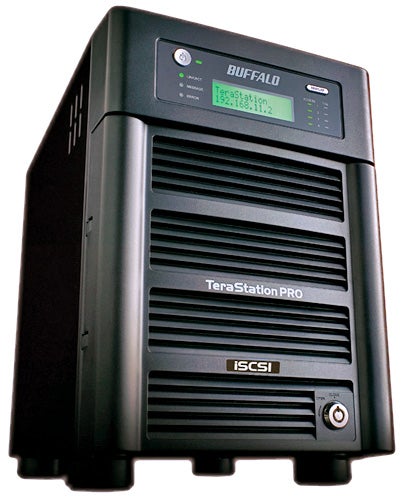 Buffalo has taken the simple expedient of commandeering its standard TeraStation Pro II NAS appliance and customising it for iSCSI operations. Consequently, you get the same 500MHz Marvell Orion SoC (system on chip) partnered by a modest 128MB of SDRAM memory. The system on review is the 1TB version and came equipped with a quartet of 250GB Samsung SATA hard disks.


Bear in mind that although the hard disk carriers are removable they not hot-swappable. Instead, Buffalo uses a quick swap feature where the drive carriers have a combined SATA/power connector cable that must be unplugged manually from the rear of the drive. Buffalo advised us that for failed drives it provides a next day replacement service and will send out a new unit complete with carrier. 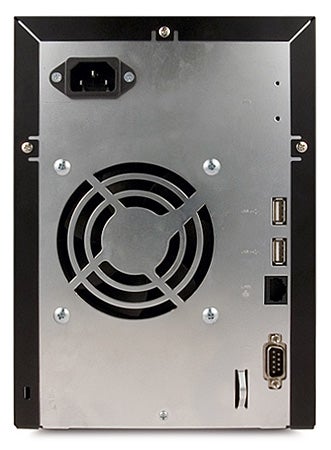 The TeraStation iSCSI is offered as both desktop and rack mount appliances but it’s important to note that neither offer standard NAS services. The firmware has been re-jigged for iSCSI operations only and does not support any normal file sharing protocols. The Thecus’ N5200PRO RouStor is a completely different beast altogether as it combines NAS and iSCSI operations simultaneously and allows you to choose how you want to present its storage to the network.


Prior to installing the appliance you need to download the latest iSCSI initiator software from Microsoft. However, once you’ve done this you don’t need to touch it anymore as Buffalo provides a simple hard disk connection tool which configures it for you. It automatically searches the network for the iSCSI appliance, adds it to the initiator as a new portal and logs on to available targets. It’s a nice touch but once you get the hang of basic iSCSI operations it’s easy enough to configure the initiator yourself.

The appliance comes out of the box configured with all four drives in a RAID-5 array although you can opt for mirrors or stripes and up to two arrays are supported. It also offers all its capacity as a single virtual volume so you initially have only one target presented to your host systems. To create multiple virtual volumes you need to activate Buffalo’s LVM (logical volume manager) feature which allows you to determine the size of the volumes and their number but as we found during testing LVM will hit performance noticeably.


Some security controls are provided as you can restrict access to specific volumes with a user name and password which will be requested by the connection tool. A mutual authorisation feature is also provided which we assumed was for implementing CHAP authorisation to selected targets but this failed to work. You can also limit access to selected volumes using their IP addresses. 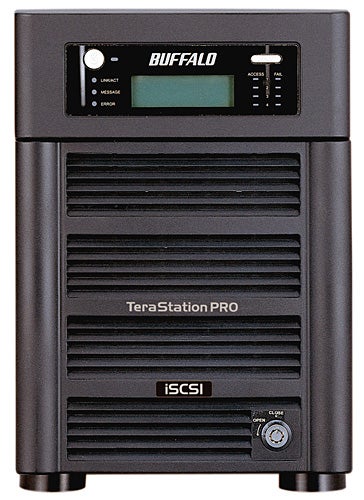 Note that any configuration operation at all requires the appliance’s iSCSI service to be stopped using the soft button at the top of the web interface. Great for stopping anyone making accidental changes to existing arrays or volumes but it does mean that all host computers currently connected will be kicked off whilst changes are being made.


It’s at this stage that we found configuration a frustrating experience as Buffalo’s user guide is barely worth the paper it’s printed on. It doesn’t even mention the LVM feature and pays scant attention to the user access controls. The on-line help in the web interface isn’t much better and looks untidy and unfinished. We asked Buffalo a number of questions about these features but received no timely responses. 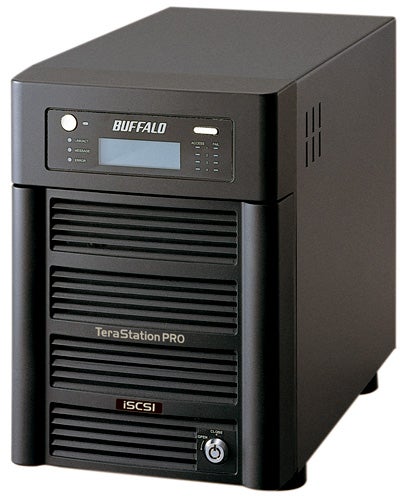 To test performance we started with a single virtual volume and LVM disabled. With a Boston Supermicro 3.2GHz Pentium D workstation logged on we saw the Iometer utility reporting a reasonable raw read rate of 56MB/sec over Gigabit Ethernet. Copying a 690MB video clip between the appliance and the workstation returned read rates of 43MB/sec but the RAID-5 array hit write speeds with these dropping to only 15MB/sec. With LVM enabled we saw Iometer reporting a much reduced raw read rate of 44MB/sec. We then created a pair of virtual volumes and logged two workstations onto them where Iometer reported a cumulative read rate of 37MB/sec for both systems.


Buffalo’s first foray into IP SAN territory leaves a lot to be desired. The appliance is easy enough to install and deploy but there’s work still to be done on the web interface, the user guide is unhelpful at best and if you want multiple virtual volumes you’ll have to accept a performance hit.

(centre)”’To create multiple volumes, LVM must be enabled with the following warning”’(/centre)

(centre)”’Once the host is logged on, a virtual volume appears as a standard local hard disk”’(/centre)