Buffalo Technology set the entry-level NAS world alight when it launched the TeraStation last year. This smart little box stuffed everything else on the market by delivering a full Terabyte (TB) of network storage at a price no-one else could even come close to. Well, it’s done it again with the TeraStation Pro. This desktop appliance also delivers masses of low-cost storage but goes one step beyond its predecessor by adding improved hard disk swap capabilities. 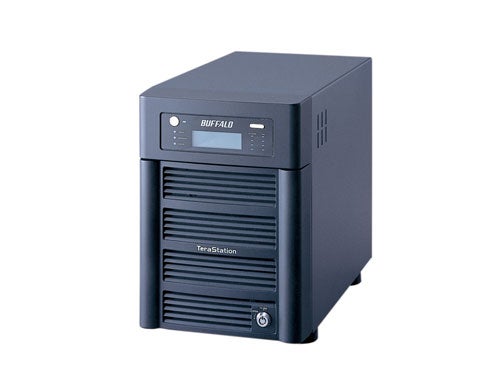 Physically, the Pro is around the same size as the original TeraStation but the new chassis has a key lockable front door that protects access to four hard disk bays. For the review system each bay was occupied by a 250GB Western Digital WD2500 SATA/150 drive fitted in a removable carrier. Up above the drive bays is a backlit LCD display and a button alongside enables you to cycle through viewing the status of the network connection and its assigned IP address, the date and time, which disks are in use and the current RAID configuration. As with the TeraStation you get a RealTek Gigabit Ethernet port, although the USB 2.0 port count drops down from four to two. These can be used to add external hard disks but sharing USB printers over the network is not supported on this product. 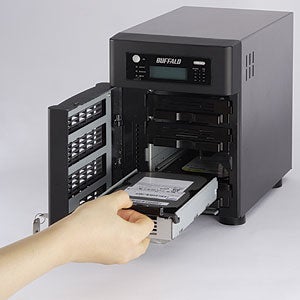 Costs are kept down by equipping the appliance with a simple 266MHz PowerPC processor and a modest 128MB of SDRAM memory. It uses a Linux kernel which is implemented partly on 4MB of flash memory. However, the kernel is also distributed across a protected 100MB partition on each hard disk. Consequently, if you try and replace all the drives with your own the appliance won’t run and you also can’t buy the appliance without any hard disks.


The quick swap feature becomes clearer when you replace a hard disk as the carriers do not have interfaces that mate with a backplane. Instead, each drive has a combined SATA/power connector cable, which must be unplugged manually from the rear of the drive. We checked with Buffalo who advised us that hot-swap is not supported, so if a drives fails the unit must be powered down before it can be replaced. Buffalo does offer a next day replacement service and the new drive arrives complete with carrier. The entire operation is completely tool free so the unit won’t need to be down for very long and once the new drive is in place the appliance will automatically rebuild the array.

Buffalo’s TeraNavigator makes light work of installation by searching the network for appliances and taking you through an initial setup phase. Four storage scenarios are supported where the drives can be used individually, as a JBOD, or can be placed in a four-disk RAID-0 stripe or span presenting a single 1TB non-fault tolerant drive to the network. The appliance supports a maximum of two arrays so you can opt for two RAID-1 mirrors each comprising two drives although this will lose you half the total capacity. Alternatively, go for the full monty and have a four disk RAID-5 array which will cost the equivalent of one drive’s capacity.


Buffalo’s Client utility can be installed on each workstation directly from the appliance, where it displays all available TeraStations, their IP addresses, the status of the hard disks and network shares. You can go directly to the password protected web management interface where you’ll find a virtually identical feature set to the TeraStation. Support for the CIFS/SMB and AFP file sharing protocols means that Windows, Linux and Macintosh clients can access network shares and you can designate volumes to be used for FTP services. Each service can be enabled or disabled individually and read only or full access granted. 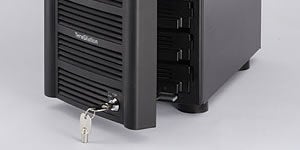 Usernames and group membership can be used to restrict access and as each share is created you can decide whether to allow global access or specific users and groups and decide whether each can have read only or full access. As we observed with the TeraStation, Buffalo’s backup options are extensive. If you have multiple TeraStations on your network you can copy data between them and the web interface will show all available units. Up to eight differential or full backup tasks can be used to secure selected shares to another location on the internal drives or to an attached USB storage device. Each job can be scheduled to run at regular intervals and data compressed and encrypted. User’s can also secure their own local data to the appliance and restore it using the bundled Easy Backup utility which enables them to schedule their own backup tasks.


The TeraStation Pro continues to set standards for affordable network storage and the quick swap feature does make it much easier to remove and replace drives although hot-swap is not supported. It provides a good range of features for the price but these are pretty much the same as those offered by the basic TeraStation so if you don’t need removable hard disks you can save hard cash by opting for the latter.