For well over year now Buffalo’s LinkStation has been its main offering to consumers looking for a low-cost NAS appliance with a decent range of features. The latest LinkStation Pro takes this concept as its foundation but builds on it with the aim of targeting small businesses that also want a simple network storage and backup appliance.


The main differences between the two LinkStation families are in the storage department with maximum capacity going through the roof as the top of the range model employs the very latest 750GB SATA hard disks. There are no changes for connectivity as the unit also sports Gigabit Ethernet plus a pair of USB 2.0 ports but has a faster 400MHz Marvel Orion Media Vault processor – the older LinkStations use a 200MHz variety.


Buffalo supplied us with the base 250GB model which came equipped with a Western Digital WD2500JS SATA/3Gbit/sec hard disk. The LinkStation Pro is well built and designed and we did notice on power up that it’s a lot quieter that previous models. Usefully, the appliance incorporates an internal power supply so you don’t have to worry about bulky transformers. 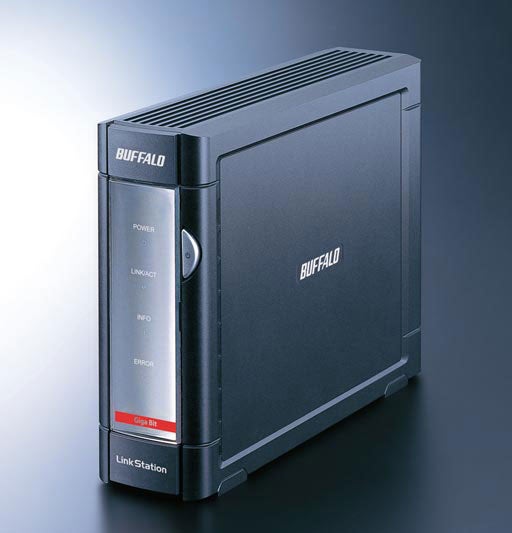 Installation is a smooth process as Buffalo’s client utility allows users to search for appliances, view shares, change their IP address and access the web management interface. The appliance runs virtually the same firmware as the TeraStation Pro so features are more extensive and with an identical web interface it’s just as easy to use. Businesses will approve of the additional access controls as along with local users and groups the appliance also supports NT domain authentication and Active Directory (AD) integration which allows an AD domain server to deal with user authentication. Support for the CIFS/SMB and AFP file sharing protocols means that Windows, Linux and Macintosh clients can access the appliance and shared folders can also be used for FTP services. Each service can be enabled or disabled individually and read only or full access granted globally or down to specific users and groups if required.


When you connect a USB storage device the appliance automatically shares the contents of the drive on insertion. However, if it hasn’t been formatted from the web interface then it will be set to read only mode. We tested this using a 300GB Maxtor OneTouch external drive but to make it writeable it needed complete reformatting. The appliance will work with USB flash memory sticks but Buffalo doesn’t recommend using them as it can’t guarantee that all will work on the appliance. We did test this with a couple of sticks from different manufacturers and found that one couldn’t be recognised.

Backup options are extensive as you can secure data to a USB drive or to another LinkStation and jobs can be run immediately, once at a specific time or scheduled for a specific time each day. However, we would suggest scheduling these outside normal hours as while they are running you can’t access a large number of administrative functions such as disk initialisation, formatting and checking, the sleep timer function, backup job creation or all share and user related tools. You can also send the appliance into a sleep mode but during these periods the appliance will be unavailable and network backups will not work.


Client backup features are just as extensive as the bundle includes Buffalo’s Easy Backup utility which allows users to schedule their own backup tasks and restore their own files. You also get Memeo’s AutoBackup software and the price includes a single user license. This is a lot more sophisticated as it supports a greater number of backup destinations, offers optional backup encryption and after the first scheduled backup has run will only secure file changes or new files. 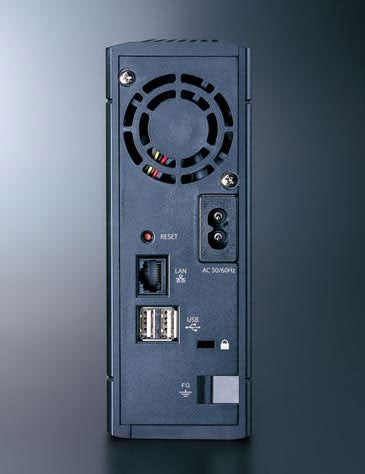 Even though the feature list is very similar to the TeraStation products there are some options that it doesn’t support. First, the USB ports cannot be used to share printers over the network. The appliance backup tools also don’t support copying data to a local destination although there’s not much point with only a single hard disk. UPS monitoring is supported as you can connect one to a USB port but the product must provide a smart signal such as those from vendors such as APC and Belkin.


Buffalo rates the LinkStation Pro as one of the fastest of its type currently on the market. We tested these claims by copying a 690MB video file from a Supermicro Pentium D 3.2GHz PC over Gigabit Ethernet to the appliance which returned 16.5Mbyte/sec write speed. Read speeds were even better as copying the file back from the appliance saw this completed in a mere 35 seconds for an average speed of nearly 20Mbyte/sec. We also tested raw throughput using the Iometer utility which reported a top 31Mbyte/sec for 100 per cent reads and 19Mbyte/sec for write operations. Clearly, the LinkStation Pro delivers on Buffalo’s promises.


Buffalo delivers a well designed NAS appliance with plenty of capacity on tap and a fine turn of speed as well. Installation is very simple and it offers a similar level of storage, backup and security features as the higher-end TeraStation appliances. 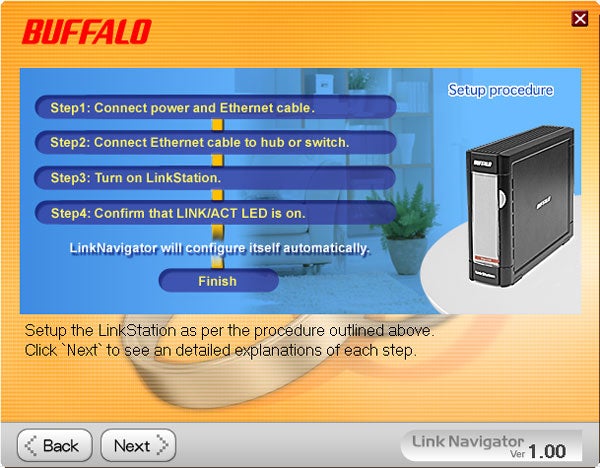 Buffalo’s quick start guide gets you off the starting blocks with a minimum of fuss.

The Client utility searches the network for any available Buffalo NAS appliance.

The USB ports are designed to work with external hard disks so some USB flash memory may not be recognised.

Backup jobs to USB devices and other LinkStations can be scheduled to run regularly.

The Memeo utility makes light work of client backup to the appliance.