You don’t need me to tell you why NAS devices are just about the best thing since sliced bread. Aside from the peace of mind afforded by knowing all of your critical data is safely backed up in the event of your PC kicking the bucket, said files can also be accessed from multiple computers or even, if you store media on your NAS, by a games console or TV. It is, as the kids say, “pretty rad.” 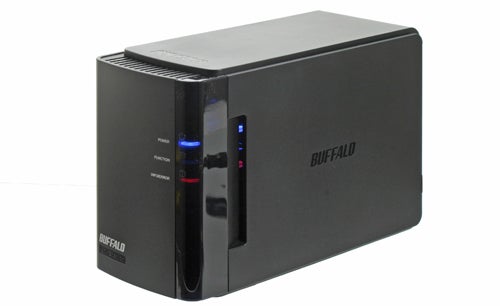 Buffalo has been in the business of making NAS devices for a long time now and it’s produced some excellent examples – an original TeraStation served as TrustedReviews’ storage repository for several years. This particular model is pitched as an upgrade to the LinkStation Pro Duo and despite dropping “Pro” from its name should prove the superior device.


For a device that’s never likely to be a centrepiece of your home computing setup the LinkStation Duo looks attractive enough. Its compact dimensions of 86mm x 204mm x 127mm should help with hiding the device out of the way should you so desire. Plus the Duo isn’t intrusively loud unlike some NAS devices I’ve had the (dis)pleasure of testing. 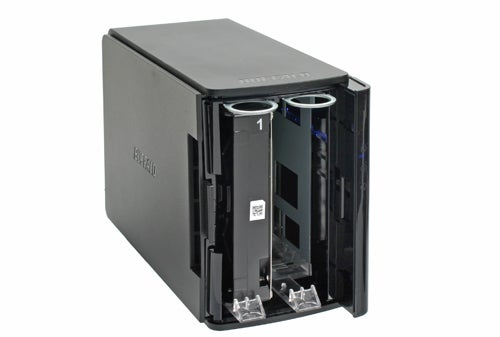 As the name betrays, the LinkStation Duo is a two bay NAS device, available in configurations of either 1TB, 2TB or 4TB – fitted with two 500GB drives, two 1TB drives or two 2TB drives respectively. These can be configured in either RAID 1 or RAID 0, or with each drive showing separately – the foremost of which is obviously the safest.


The two hard drives are accessed by popping off the front cover, revealing two quick-release bays. As such, it’s the work of a moment to pop out an old drive and place in a new one. There’s no facility for upgrading the Duo’s storage capacity in-place, but that’s hardly a major criticism; just be sure to pick the right drives initially.

Initial setup is made easy thanks to the bundled NAS Navigator software, which will hunt out the Duo (and any other Buffalo NAS) on your network and give it a shortcut to both the device’s web interface and to mapping its storage to a network drive. Another feature that could prove useful is the Auto power option. In this mode, the LinkStation sits idle until a PC with the Navigator software tells it to wake up. Although this isn’t exactly useful when using non-PC devices or web access, obviously. 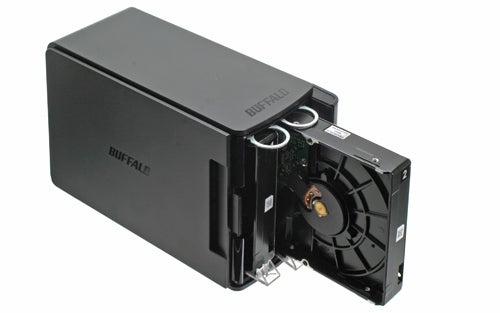 There are a number of features available on the LinkStation Duo that might incline you to leaving it fully powered all of the time. UPnP and DLNA compliant media streaming is one plus point, showing no problems using Media Centre on a Windows 7 PC, an Xbox 360 and a PlayStation 3 – as you would hope. If you use iTunes then the Duo’s ability to operate as an iTunes Server will likely prove useful.


A built-in BitTorrent client should prove useful, too, letting you download all of those freely distributed files you’re so keen on. Linux distributions, Nine Inch Nails’ The Slip – that sort of thing. This is configured through its own separate interface, which is perfect for control with a smartphone – why turn on your computer just to start a download?


A USB port on the back of the Duo can serve a couple of functions, some controlled by the logically labelled ‘Function’ button found above it. The simplest of these is to connect an external hard drive to the Duo, which can then have data transferred to it either on a scheduled basis or when that Function button is pressed. Alternatively, that function button can initiate transfers from a USB storage device to the Duo. Oddly, only media files will be copied, though at least these are placed into appropriate folders. Usefully, this works for files on a digital camera or camcorder, too. 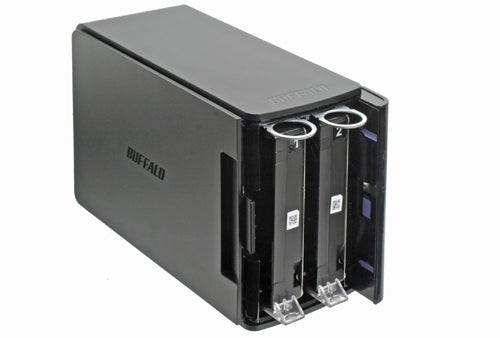 According to Buffalo, one of the major advantages of the Duo over its predecessor is a maximum transfer rate of 40MB/s – 166 per cent faster than before. As such you’ll definitely want to be using a direct, Gigabit Ethernet connection as such swift transfers put my aging 85Mb/s HomePlug kit to shame.


Transferring a 3GB ZIP file of various MP3s to and from the LinkStation Duo returned a 37.2MB/s read and 22.3MB/s write speed, while that same assortment of files separately gave a slower 29.6MB/s read and 17.6MB/s write. While that doesn’t make this an outstandingly fast NAS device, it does at least make it an honest one.

An excellent feature offered by the Duo, and common to many Buffalo NAS devices, is WebAccess. Ostensibly this just allows files on the Duo to be browsed via a compatible web browser, including Android’s or mobile Safari. Where Buffalo excels is by offering its own dynamic DNS portal, such that you don’t need to register with a third-party service in order to gain entry to your NAS remotely – it’s a small touch, but a neat one. 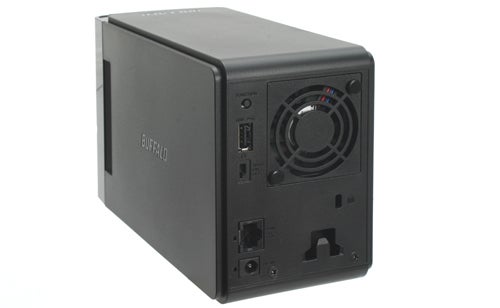 It’s a system simple enough that most users shouldn’t have any problems, without verging as close to patronising its users as the Netgear Stora. Further, while the feature set isn’t quite as rich as the QNAP TS-219, nor the UI quite as snazzy, this is reflected in the £100-odd lower price.


The QNAP NAS, for example, offers three USB ports and can have a webcam connected to it. Conversely, the only function the Duo’s USB port can serve – other than accommodating USB storage – is to hook up a USB printer, which can then be shared over a local network. 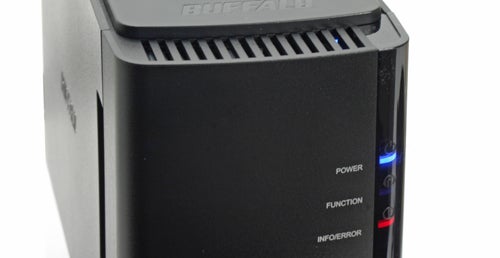 Also good is the bundled Memeo AutoBackup software. As you might guess, this backs up your data automatically. What’s particularly noteworthy here is the smart placement of files into appropriate folders, saving you the effort. It’s not flawless – if you’re particular about how your files are arranged this isn’t for you – but it’s a damn sight better than performing the same process manually. If you’re a Mac user, Time Machine support will be good news.


Other NAS devices offer more functionality – Netgear’s ReadyNAS range supports third-party plugins, for example – but for a little under £200 you can’t expect such luxuries. Those features the LinkStation Duo does offer work without any problems. What more can we ask for?


The feature set and performance of the Buffalo LinkStation Duo are hard to snub, especially given its reasonable asking price.