Buffalo probably isn’t the first name that springs to mind when you think of DVD players, but the Link Theater is more than just a DVD player. Following in the footsteps of KiSS, Buffalo has created a DVD player that can playback multiple video formats on multiple storage mediums. Gone are the days when consumers just needed MPEG2 DVD playback in their living room, now MPEG4 is as much a prerequisite as retail DVDs.


Considering that Buffalo isn’t primarily a consumer electronics company, it has done its best to make the Link Theater look good. The mirrored fascia complements the matt silver finish of the chassis, but unfortunately the green LED display is far less impressive and looks somewhat dated compared to most modern DVD players. The round silver buttons are also very generic in appearance and look purely functional rather than stylish. As far as buttons go you have Power, Eject, Stop, Skip Back, Skip Forward and Play/Pause. There’s also an AOSS button, which will enable Buffalo’s automatic security negotiation when the Link Theater is used in conjunction with a Buffalo wireless router or access point.

The Link Theater looks like a standard DVD player, but it’s actually so much more. But for simplicity sake, let’s start with just that, DVD playback. The quality of the DVD playback from the Link Theater is surprisingly good – this is helped by the fact that it supports progressive scan output from the component video ports. I watched a number of discs and was impressed overall, while the Link Theater also managed to playback some notoriously dodgy discs that my regular Pioneer player had trouble with.


I’m always glad to see component video connectors – the resulting image quality is far superior to SCART or S-Video. That said, if you don’t happen to have a TV with component inputs (although I can’t imagine why you wouldn’t) you’re somewhat out of luck, since there are no SCART sockets on the Link Theater. There is a D4 connector, but unfortunately this doesn’t mean very much to European consumers.


DVD playback wasn’t perfect though. For a start, the Link Theater isn’t multi-region out of the box. There is a code that you can type in on the remote to enable multi-region, but you’ll have to trawl through the Internet looking for it since it’s not in the manual. Or of course I could mention it – press “slow” then “2960” – but maybe I shouldn’t. If you do enter the region unlock code – whatever it may be – you will be able to set the Link Theater to any region. If you select Region 0, you should be able to play any disc – after selecting Region 0, I was able to play Region 1, 2 and 4 discs without any problems.

One thing that annoyed me is that if you’ve got the player set to output widescreen DVD and you insert a 4:3 disc, instead of zooming the picture, it will play it in 4:3 with bars down the side. OK, I accept that it’s not really doing anything wrong, but if you’ve got a widescreen TV you don’t want to be watching your content like that.


As well as the aforementioned component video and S-Video connectors at the rear, you’ll also find a composite video output – but if you use this, you deserve to be slapped. Audio is well catered for with analogue stereo outputs as well as both optical and coaxial digital outputs. There’s no analogue surround sound outputs, but amps with integrated processors are so cheap now that they’re not really necessary.

The final port at the rear is something that’s been common on KiSS players for years – an Ethernet port. Unsurprisingly, the Ethernet port allows you to connect the Link Theater to your network and stream content from a PC. This allows you to store all your music, video and images on your PC, but view them in your living room. The only problem is that you’ll need to have a CAT5 cable running through your house between the two devices. Once solution would be to connect a wireless bridge to the Ethernet port – something that I do with my Xbox and PlayStation 2. However, Buffalo is way ahead of me on this one.


You see the Link Theater also has a built-in wireless adapter, so you won’t need to use a bridge to get connected to your wireless network. You’ll notice from the pictures that there isn’t an antenna on the Link Theater, but despite this it managed to connect to my router without issue. The reason that I am impressed with the wireless adapter in the Link Theater is that my flat is a very hostile environment for WiFi – the building was constructed in the 1850s and there are several solid stone walls between my living room and bedroom (where the router sits).


Of course linking to the router is only half the battle – it’s the quality of the streaming that’s really important. Playback of MP3 files from my PC was good, although the first track always seemed to come through garbled for the first few seconds, before smoothing out. After that initial splutter though, MP3 sound quality was excellent. Viewing images and slide shows was also impressive, allowing you to bore your friends with all your holiday snaps from the comfort of your sofa.

But it’s the video streaming that’s really important, and here the Link Theater proved to be a mixed bag. When I first tried streaming some DivX content the video played back smoothly for about ten minutes, then stopped to buffer, then played again for a few minutes then stopped to buffer etc. The biggest problem with this is that after each buffering instance, the video shot forward at high speed for a while before returning to normal, meaning that you missed vital elements of the story.


I tried flashing a new firmware into the Link Theater to solve the streaming problem, but incredibly it actually made things worse. Whereas the video was buffering every ten minutes or so before the firmware flash, afterwards the buffering was pretty much continual! Having done a little trawling around the Internet, I’ve found that I’m not the only person to have this problem and most users have gone back to the earlier firmware. To be fair, streaming performance could be better in a less hostile WiFi environment, but here in the UK many houses are like mine with thick, solid walls. 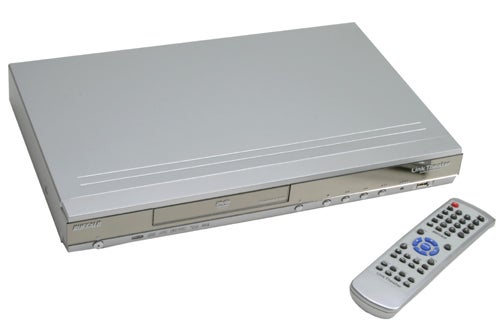 If you do find that you are having problems streaming video wirelessly, you could always burn your video to a CD or DVD. Having tried this method also, I found that the Buffalo is partial to high quality media. While the Link Theater had no problems playing back MPEG4 video from a Verbatim disc, when I used generic “no brand” media I found my video freezing and refusing to play. But burning video to disc, even RW discs, can be a pain and thankfully, once again Buffalo has this covered.


Nestling at the far right of the front fascia is a USB port. Here you can plug in a USB flash memory key and stream video directly from it. This worked flawlessly and I tried about five different USB devices, all of which were more than happy to work with the Link Theater. Using this method you don’t have to worry about buffering over wireless, or burning data to discs, you simply drag and drop your content to a memory key, plug it in and away you go!

Now, some say that you should leave the best until last, but in this case I’m going to do the opposite, because the biggest let down with the Link Theater is the appalling remote control. Not only is the remote control generic, with unpleasant feeling rubber buttons, but it’s also convoluted and confusing to use. Entering an IP address is case in point – you have to use the number buttons, but these also let you enter letters, so you have to cycle through lower case and upper case letters before you get to numbers. Then trying to enter a dot to separate the IP address requires multiple presses of the 1 button, but you have to return to lower case letter mode to do this. But the worst part of the remote control is that the range is, quite simply awful – at one point I found myself having to get up from the sofa and stand two feet from the Link Theater to make it work.


There are no optical or coaxial digital audio cables included, which is a shame, although there is an Ethernet cable for getting hooked up to your network .


The last aspect of the Link Theater is the price and at £181 it seems fairly reasonable, after all you are getting a great deal of functionality for that price, it’s just unfortunate that not all of it works as well as it should. Hopefully future firmware upgrades will improve the wireless streaming, while I’d like to see future versions of the Link Theater build on and improve what Buffalo has created here.


Buffalo has created a very versatile audio/video playback device in the shape of the Link Theater. On paper it has just about every base covered, but there are issues with the WiFi streaming, some optical media and the remote control. The latter is probably the most disappointing aspect of the whole package and just doesn’t seem to fit with the Link Theater, which itself seems a cut above similar products.


The image quality from both DVD and MPEG4 playback over component video is very good indeed, better than I’ve seen from any other device of this type. Also, the ability to stream video directly from a USB key is a feature that I have grown to love during my time with the Link Theater.


I can’t help but hope that Buffalo will address all of the issues I’ve mentioned with the next generation of the Link Theater. There’s no doubt that with a little tweaking and some ironing out of the rough spots, the Link Theater could be a fantastic product. As it stands though, it’s not quite there, leaving the user frustrated all too often.