There’s something a little special about the Buffalo DriveStation HD-HXU3 external hard drive we’re looking at today. It’s not the casing, which is a glossy plastic variant of what every other manufacturer offers; it’s not the capacity, which is a fairly average 1TB; nor is it the software, which consists of a basic backup program much like you’ll find on many other drives. Even in terms of connectivity there’s only a single USB socket – but as the title has already given away, it’s USB 3.0 rather than the 2.0 version found on almost every other device around.


For those of you who have been living under a rock for the last few years, this is incredibly significant. We’ve been happily living with Universal Serial Bus (USB) version 2.0 for years; indeed it’s so ubiquitous that you’ll find it in anything from DisplayLink monitors, through webcams, peripherals, cameras, memory sticks, headphones and printers to mobile phones – most things that can be connected to a PC, in fact. 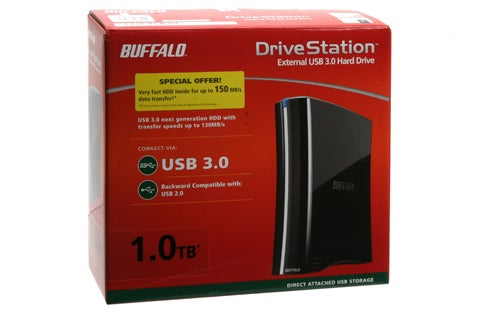 However, anyone who has had to transfer large amounts of data from a memory stick or external hard drive will know that it’s simply not a fast enough solution. USB 3.0 is here to rectify this, finally offering a huge and much-needed increase in bandwidth: compare USB 3.0’s 4.8Gbit/s to USB 2.0’s miserly 480Mbit/s (keeping in mind that theoretical maximum bandwidth is almost never reached in real-world scenarios).


Inevitably other solutions have presented themselves, with the most popular of these being eSATA (external SATA), which offers a high bandwidth of 3.2Gbit/s. However, this brings with it its own set of complications, including short, thick cables, and no integrated power provision to devices. Worse is that it’s not a universal standard, so while you can guarantee that any laptop or PC that’s been released in the last 5 years has USB 2.0 ports, the same can’t be said for eSATA. USB 3.0, however, has the potential to quickly replace its predecessor as the de-facto connectivity standard, especially since it is backwards compatible and a single controller can still handle up to 127 daisy-chained devices. 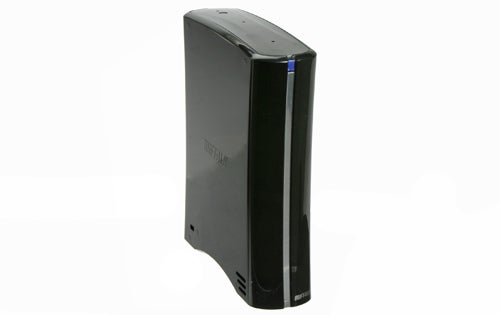 To clarify the point about backwards compatibility: you’ll be able to plug USB 2.0 devices into a USB 3.0 controller’s ports, and USB 3.0 devices into USB 2.0 ports – but of course they’ll only work at USB 2.0 speeds, so there’s no point getting a SuperSpeed drive for your old PC (though there are adapter cards available, so anyone with a free PCIe slot can add USB 3.0 to their machine). It’s worth keeping in mind that USB 3.0 devices also require USB 3.0 cables, which have a different connector at the device end – meaning you can’t use your old cables even if you wanted to. While this might be inconvenient, it does help to avoid confusion and we reckon the possible inconvenience is worth it.


Now that you have an idea of what USB 3.0 potentially brings to the table, it’s time to take a closer look at the first commercially available external drive that’s offering this new technology. Buffalo’s DriveStation HD-HXU3 is an imposing 156 x 175 x 45mm, though its weight of 1.1kg is pretty standard. It’s designed so it can only be placed upright on broad rubber feet. 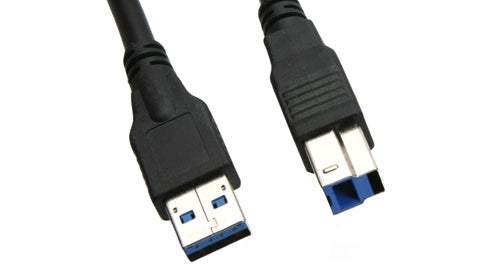 There are quite a few curves, which combine with the silver strip that runs down its centre and the blue/green LED at the top to make for a reasonably attractive look. Unfortunately, the glossy black finish is as eager as ever to woo fingerprints and dust. Build quality is excellent though, with solid plastics holding up flawlessly under pressure. With the drive you get a compact power adapter and of course that all-important one metre-long USB 3.0 cable.


The 1TB drive is preformatted to FAT32, so one of the first things Windows users will want to do is reformat using NTFS; after all, what’s the point of a 1,000GB drive that won’t take files larger than 4GB? Of course formatted capacity is lower at 931GB. For now, Buffalo’s HD-HXU3 will use a 7,200rpm SATA II 3.5in drive of unspecified brand as these might vary according to “market conditions” (i.e. whichever HDD manufacturer offers the cheapest reliable option). 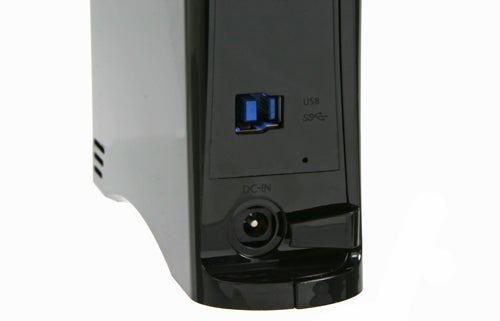 Software for both Mac and PC comes pre-installed on the drive and it takes up less than 100MB. Mameo is a competent and visually attractive backup utility that takes only seconds to install. TurboUSB is another optional install, but if you’re using USB 3.0 we wouldn’t bother as, unfortunately, in our tests it gave absolutely no speed advantage whatsoever. This might change depending on future revisions by Buffalo, but until then there would appear to be no reason to install it – except on any USB 2.0 systems you might also hook the drive up to.

Anyway, with the minor details out of the way, let’s see how this USB 3.0 hard drive performs! Obviously we needed a system with USB 3.0, so our test-bed was constructed using Asus’ P7P55D-E Premium – essentially a SATA III (6Gbit/s) and USB 3.0-enabled version of the Award-winning Asus P7P55D Premium we reviewed last year. We’ll be taking a separate look at this updated board in an upcoming review.

Returning the drive to an unformatted state for our first test, we ran HDTune Pro over both USB 2.0 and 3.0. As expected, the performance difference was pretty dramatic. Comparing read speeds, at its worst USB 3.0 was almost three times as fast as its predecessor, while at maximum it performed up to five times faster. Not quite the 10x increase the theoretical throughput figures would suggest but still a very noticeable difference. Write speeds showed a similar scenario, except here the gap was even more pronounced.

Finally we performed a file transfer test from our test-bed’s hard drive to the Buffalo using both USB 2.0 and 3.0. We used a test folder with a random collection of files inside to represent what the average user might copy across to an external disk. Over USB 2.0 this took just 10 seconds short of a minute, while USB 3.0 manages it in a mere 18 seconds! For a single large 3.5GB file we again saw a three-times performance increase, where USB 2.0 took 135 seconds compared to 46 seconds for USB 3.0. Depending on file type and structure you might get somewhat different results, but the performance ratio should remain similar and it’s clear that the new USB standard makes a substantial difference.

So, with the 1TB models of the DriveStation costing £92 and £82 respectively for the new and old USB versions, you would quite simply have to be mad not to buy into the new technology. After all, even if your PC or laptop is not compatible with USB 3.0 it’s an easy fix to add-in a PCIe or ExpressCard adapter (as long as your system offers those, of course). 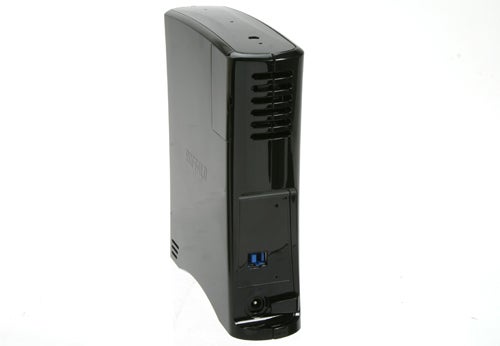 However, before you splash the cash, we would probably recommend waiting just a little longer for the deluge of USB 3.0 products we’ll doubtlessly see in the very near future. For example, the two-port controller from NEC that’s currently the only USB 3.0 controller available is soon to be joined by a lower-energy four-port VIA alternative, and USB 3.0 hard drives and caddies from the other main drive manufacturers will be flooding the market soon. 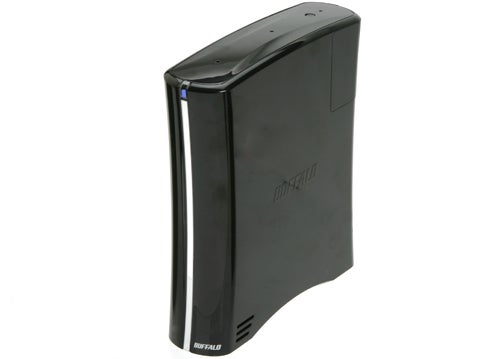 
As an external 3.5in hard drive the Buffalo DriveStation HD-HXU3 is solid if unremarkable, but its use of the new USB 3.0 standard elevates it to a whole new level above previous external desktop drives we have seen. Of course there will soon be no shortage of competition with this Buffalo, but either way it’s clear USB 3.0 is one of the biggest evolutions to happen in computer connectivity in quite a while.