From our lab test results it looks like MIMO (multiple in multiple out) technology is not only giving wireless networks a big boost in the speed stakes but much better coverage as well. We were well impressed by Netgear’s gaudy RangeMax WPN824 and Belkin’s craftily named Pre-N and in this review we take a look at Buffalo Technology’s first MIMO wireless router to see how it stacks up against the competition. 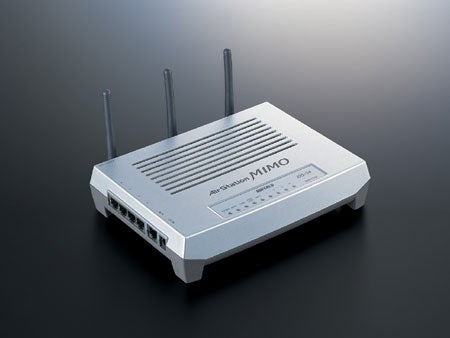 Design has never been one of Buffalo’s fortes, so be under no illusions – the AirStation MIMO is not a pretty sight. The chunky, boxy chassis with its ugly ventilation slots lacks the sleek lines of a Belkin and the flare of a NetGear and also feels more flimsy. The three aerials at the rear are also less sturdy and cannot be removed so will be of no use in environments where external high-gain aerials are required to extend the wireless range in line of sight connections. That said the AirStation does offer a good set of features for the price as along with MIMO support you get a four-port Fast Ethernet switch and 802.11b and g wireless operations while security features extend to an integral NAT/SPI firewall, wireless encryption, intrusion detection and packet filtering options. 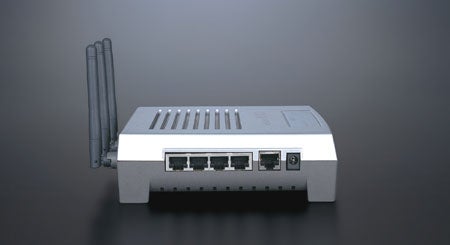 Setup is easy enough but bear in mind that the router requires an external ADSL or cable modem and uses a standard RJ-45 Ethernet WAN port for connection to the device. In its simplest from the router’s WAN port is designed to take an IP address and DNS information from your modem’s DHCP server and pass it onto the clients on the LAN. The basic web interface opens with a couple of quick start buttons for automatically configuring your ADSL or cable modem link and we used an intelligent ActionTec ADSL modem to good effect. In fact, the router worked fine on our test business network as we connected it directly to our LAN where it accepted an IP address from our gateway and proceeded to provide Internet access to all connected clients.

One feature that makes Buffalo’s wireless products stand out is AOSS (AirStation One-touch Secure System) which offers a one stop shop for setting up the best wireless security. The process starts by pressing a small button on the back of the router which causes the AOSS LED on the top panel to flash. This must be pressed for between three and five seconds but be careful as holding it down for ten seconds sets the router back to its factory defaults. You then use the accompanying Client Manager utility supplied with Buffalo’s wireless adapter and press the AOSS soft button on the Profiles page. The two then communicate and a connection with the best level of wireless security is automatically created.


We tested this feature successfully with a Buffalo AOSS compliant wireless PC Card. The router and client are supposed to negotiate the highest available level of security but we found they would only go up to 128-bit WEP encryption. However, from the management screen it is possible to choose the level you want and with WPA-TKIP selected and AOSS reactivated we found the router and client renegotiated using this instead of WEP. Overall, we found AOSS a very slick process that makes light work of setting up secure wireless connections. 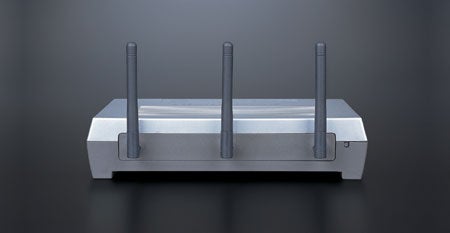 So does Buffalo’s MIMO implementation deliver the range and speeds we’ve now comes to expect? We used a 1.6GHz Fujitsu Siemens notebook running Windows XP SP2 and fitted with a Buffalo WLI-CB-G108 wireless PC Card. The Buffalo performed well in our range tests in an office environment and returned figures similar to Netgear’s WPN824. We used AOSS to establish a secure WPA-PSK connection to the router and saw signal strength drop by around 28 per cent with the laptop at the end of a fifty metre corridor with two large fire doors in the way. A circuit of the first floor was completed with signal dropping to a low of 18 per cent and the Buffalo also found the same dead spot that confounded the Netgear. This was approximately sixty metres from the router in a straight line but with a steel reinforced concrete floor, three fire doors and four other offices in the way. Performance was also up with the best as Buffalo delivered an impressive 46.8Mbit/sec raw read throughput over an unencrypted link and 33.2Mbit/sec over WPA-PSK putting it on a level pegging with the MIMO products from both Netgear and Belkin.


Apart from AOSS the Buffalo router provides fewer features than much of competition as it doesn’t offer any parental controls in the form of URL filtering and schedules as offered by Netgear. However, if it does detect any intrusion attempts it can fire off an email message to one recipient and it can also send pop-up warnings to other systems with the Client Manager software installed.


The jewel in Buffalo’s crown is undoubtedly its AOSS technology which we found takes the pain out of setting up securely encrypted wireless links. MIMO performance and extended range are also very impressive although general router features and design aren’t as good as Netgear’s WPN824.