This year has seen consumer and small business wireless networking technology come on in leaps and bounds with performance and range seeing some significant improvements. MIMO (multiple in multiple out) has not only given them a big boost in the speed stakes but much better coverage as well. Put a couple of brick walls in the way of a standard 802.11g access point and watch range take a nose dive but we’ve seen MIMO technology get around this easily. However, that’s not good enough for Buffalo as its latest G54 wireless access point and PC Card have replaced MIMO with built-in signal amplifiers to increase range even further with the company making some big claims. The new access point aims to deliver a 60 per cent improvement to transmit power over standard 802.11g products but it can also extend the range by up to 70 per cent and offer a speed boost of 50 per cent.


Despite its diminutive stature the G54 AP delivers a strong range of features. It supports both 802.11b and g clients, comes with an integral four-port Fast Ethernet switch and uses a standard SPI firewall augmented with basic intrusion detection capabilities. The only drawback is that it doesn’t include an integrated ADSL modem although the Ethernet WAN port does make it ideal for both ADSL and cable users who already have a modem. Furthermore, Buffalo claims it’s smart enough to automatically detect your Internet connection details and configure itself ready to go. Another bonus if you’re using Buffalo’s wireless PC Cards is its AOSS (AirStation One-touch Secure System) which offers a one stop shop for setting up the best wireless security with the minimum fuss. 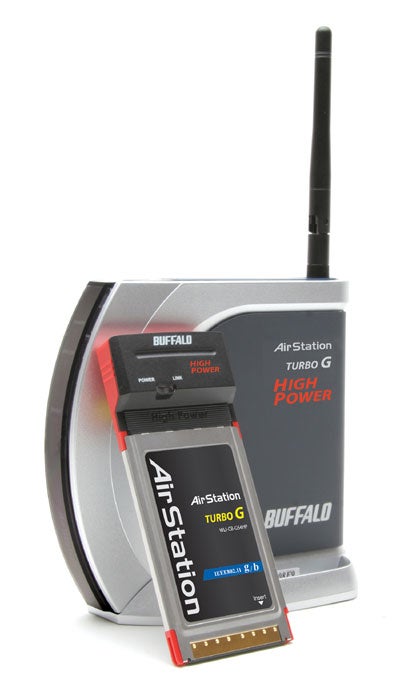 Installation is indeed a swift affair and using an intelligent ActionTec ADSL modem on the WAN port we simply connected all our clients to the switch and had Internet access up and running without even going near the AP’s web management interface. In fact, the router worked fine on our test business network as we connected it directly to our LAN where it accepted an IP address from our gateway and proceeded to provide Internet access to all connected clients.


When you do load the browser interface you’ll find it opens with an easy access home page for all basic settings including a quick Internet setup routine if required, port mapping for Internet games, firewall settings and wireless encryption. Moving to the Advanced settings gives full access to LAN, WAN and wireless parameters and administration and diagnostics pages.


For wireless security Buffalo’s AOSS takes the pain out setting up encryption as it does it automatically. You start the process by pressing a small button on the top of the AP for around five seconds which causes an LED alongside to flash. Older AOSS APs used this same button for resetting the unit to factory defaults but Buffalo has sensibly incorporated a separate reset button underneath the unit for this function. At your laptop or PC equipped with a Buffalo AOSS compliant wireless adapter you then press the AOSS soft button in the Buffalo Client manager which is found under the Profiles tab. The two then communicate and a connection with the best level of wireless security is automatically created. We tested this feature successfully with a Buffalo G54 AOSS compliant wireless PC Card and watched the two automatically negotiate a full-on WPA-AES encrypted connection with no intervention once the respective AOSS buttons had been activated.

In our range tests within an office environment we used AOSS to establish a secure WPA-AES connection to the AP and saw signal strength drop to around 80 per cent with the laptop at the end of a fifty metre corridor with two large fire doors in the way. In this test the G54 delivered a stronger signal than MIMO routers. Completing a circuit of the first floor saw signal strength drop to around 20 per cent – again, slightly better than MIMO. However, the G54 partnership also came up against the same dead spot that has confounded all MIMO routers we’ve tested. This was approximately sixty metres from the router in a straight line but with a steel reinforced concrete floor, three fire doors and four offices in the way. Nevertheless, we would say that the G54 is a better bet than MIMO-based APs if you’re looking for extended range with minimal obstructions.


The built-in signal amplifier of this AP works well enough to deliver enhancements to wireless range while performance over encrypted links is particularly good. The G54 provides a fine range of features for the price and Buffalo’s AOSS certainly takes the strain out of setting up wireless security.