An excellent baby monitor with fantastic range, the BT Video Baby Monitor 600 will ensure you can relax when away from your baby.

When it comes to creating wireless devices with good range, BT has been at it for years with home phones. So it’s little surprise the baby monitor market was always going to be an easy win for the company. Nevertheless, there’s a lot to think about when getting this right. As the range-topping model, does the generous-screened BT Video Baby Monitor 6000 do the job?

There’s no shortage of features including sound sensors, auto night vision, a push-to-talk system, and that big display. But without an ability to link to Wi-Fi, or be used with an app, this monitor may seem a little old-fashioned. Regardless, you’ll revel in its simplicity and reliability. 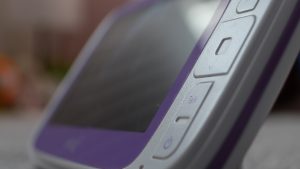 The most prominent feature of the 6000 unit – over the 5000 or 3000, for example – is that 5-inch screen. It’s a colour panel that will also display in night vision automatically when the camera detects light is low.

On the front of the unit are physical buttons for quick and easy control of volume and brightness, and there’s a push-to-talk feature, too. On the rear is a pop-out stand that lets you prop the unit upright. Down the side of the screen are a series of lights that will indicate if sound is detected, going from green to red as it gets louder.

It’s the simplicity of the unit that’s its greatest appeal. It feels a bit plasticky, but not in a cheap way; rather in a solid and robust manner. As such, you’ll be fine throwing it into a bag – to take away on holiday, for example – without worry. Also, if your little one gets hold of it then you needn’t worry too much about mucky hands or even the odd drop to the floor.

The rear features a USB-C port for charging, which is ideal if you already have a phone charger, or another device with that cable. You can even charge the unit in the car.

The camera unit is similarly plastic and solid, but is far more simple with just one slider to power it on and off. A small diffused amber light will displays to indicate the unit is on – something that might distract your little one, but generally isn’t bright enough to be an issue. In fact, it could be enough to do away with any other night-light in the room.

The camera base is solid, so it can be propped on a cot edge easily. There’s plenty of flexibility in the neck, which allows you to perfectly tilt it downwards towards your child in the cot. 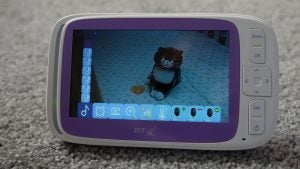 Automatic night vision is still one of the most useful features. The 6000 has a super-clear night vision system that is as vibrant in the dark as it is in the day.

The sound sensors are fantastic. These allow you to leave the monitor in standby with the screen off, saving battery life; it will pop on when it detects anything.

The push-to-talk button is another decent feature that lets you speak into the monitor and have the voice come on at the camera end where the baby can hear you.

A useful temperature gauge is displayed on the monitor, thanks to a thermal sensor in the camera. Compared to a dedicated thermometer, there was a little play by a degree or so, but as a general guide it works well.

There’s a selection of five lullabies that can be played to the baby – a nice idea, but they’re pretty flat-sounding so might not be much use for relaxing.

The kick-stand at the rear works with that auto-off display. For instance, you can leave the monitor in your line of sight while watching a film, but you’ll only notice it when there’s movement or sound and the screen turns back on. 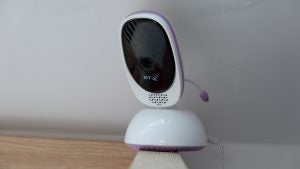 The wireless connectivity between the camera and the monitor is super-impressive, working at the other end of the house across two floors and through lots of walls. BT says it can work up to 250 metres. It will even work in the garden, if you don’t go too far.

Since this is a plug-and-play closed system, you can use it anywhere – on holiday, for example – without faffing about with Wi-Fi. So while a lack of Wi-Fi and app support could be seen as a negative to some, the it-just-works simplicity of the Baby Monitor 6000 is actually quite refreshing.

Although the monitor benefits from a large display, it falls down slightly on quality. The resolution of the screen does look very granular. It works just fine for the job, but takes a bit of getting used to at first. The key here is that you can detect breathing movements in the little one and see facial expressions easily enough, so it does the job well.

The camera itself does come up a little zoomed in. As a result, the camera needs to be quite far from baby to ensure you can see them. Often this proves troublesome if the monitor is propped on the cot and the little one rolls out of sight. A wide-angle lens here would make sense, if you’re listening BT. 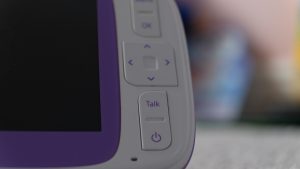 While the push-to-talk feature is a decent idea and addition, in reality it doesn’t always work. If the camera is propped up and you’re calming baby with some words or shushing sounds, they may get up and push the camera away if they’re big enough. If they’re younger, the voice may even freak them out. This is probably more dependant on the baby rather than the monitor itself.

The noise sensors are well tuned. This won’t turn on if a car drives by outside or a dog barks, for example, but it will detect slight noises from the baby. In fact, the sound of baby rolling over was actually picked up on occasion.

Claimed battery life is four hours, with a 12-hour charge time, which isn’t ideal. In reality, with the screen turning off when not in use, we found the unit lasted the whole night – albeit a newborn baby night, of a few hours of sleep. A quick half-hour charge will get you enough juice to last a good hour or two. So while battery life is frustrating, it’s usable. Plus, you always have the option of plugging in the monitor wherever you settle. 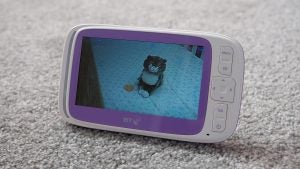 If you live in a large property, or one with dense walls that block signal, the range capabilities of the BT Video Baby Monitor 6000 are fantastic. Also, if you don’t have decent Wi-Fi, or would rather keep your monitor system a closed-loop for simplicity and reliability, then this is perfect.