The baby monitor option is the BT Smart Home Cam's point of difference, but the clunky interface and poor video quality are a letdown and this doesn't function well as a dedicated security camera.

What is the BT Smart Home Cam?

While other manufacturers may be going smarter and more expensive with their cameras, the BT Smart Home Cam is something of a throwback to a different age. It has a lower resolution (720p) than most modern cameras, has a PIR sensor for motion detection and no cloud storage.

As a result, it’s a fair bit cheaper than many other cameras. An outdated app make and lack of features make this camera hard to recommend, though.

The tear-shaped design with the camera lens mounted in the middle is basic and simple, and the BT Smart Home Cam’s gloss plastic looks okay from a distance. Pick up the camera and you’ll instantly feel just how light it is, with very little inside the plastic housing.

The basic stand does a good enough job. You can place it on a desk and it’s sturdy enough that the power cable plugged into the rear doesn’t move the camera around. It’s a little annoying that you can’t tilt the camera down (only up), as it prevents you from putting the BT Smart Home Cam too high up because you’ll miss the action.

Alternatively, you can screw the stand to a wall or ceiling if you’d rather mount it. When you do this, the ability to tilt up makes more sense, giving you greater control over the view.

At the rear, there’s a microSD card slot, plus a physical switch to turn the camera on and off for when you want privacy. 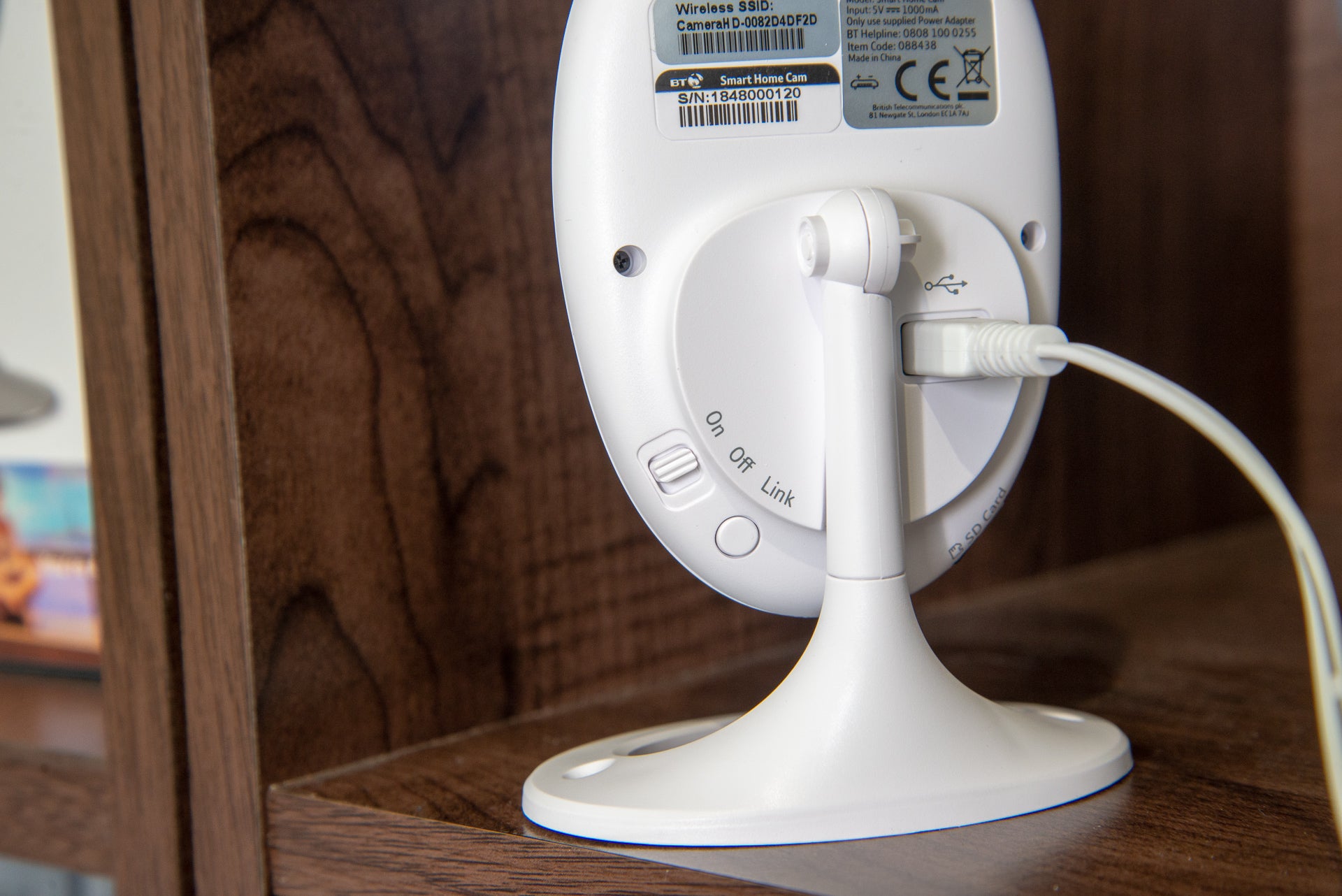 “Basic” is the best way to describe the BT Smart Home Cam. There’s no cloud storage and no microSD card supplied in the box. To record any footage, you’ll first need to buy your own card. Just inserting an SD card won’t do the job; you also have to remember to toggle on the SD card option in the app. 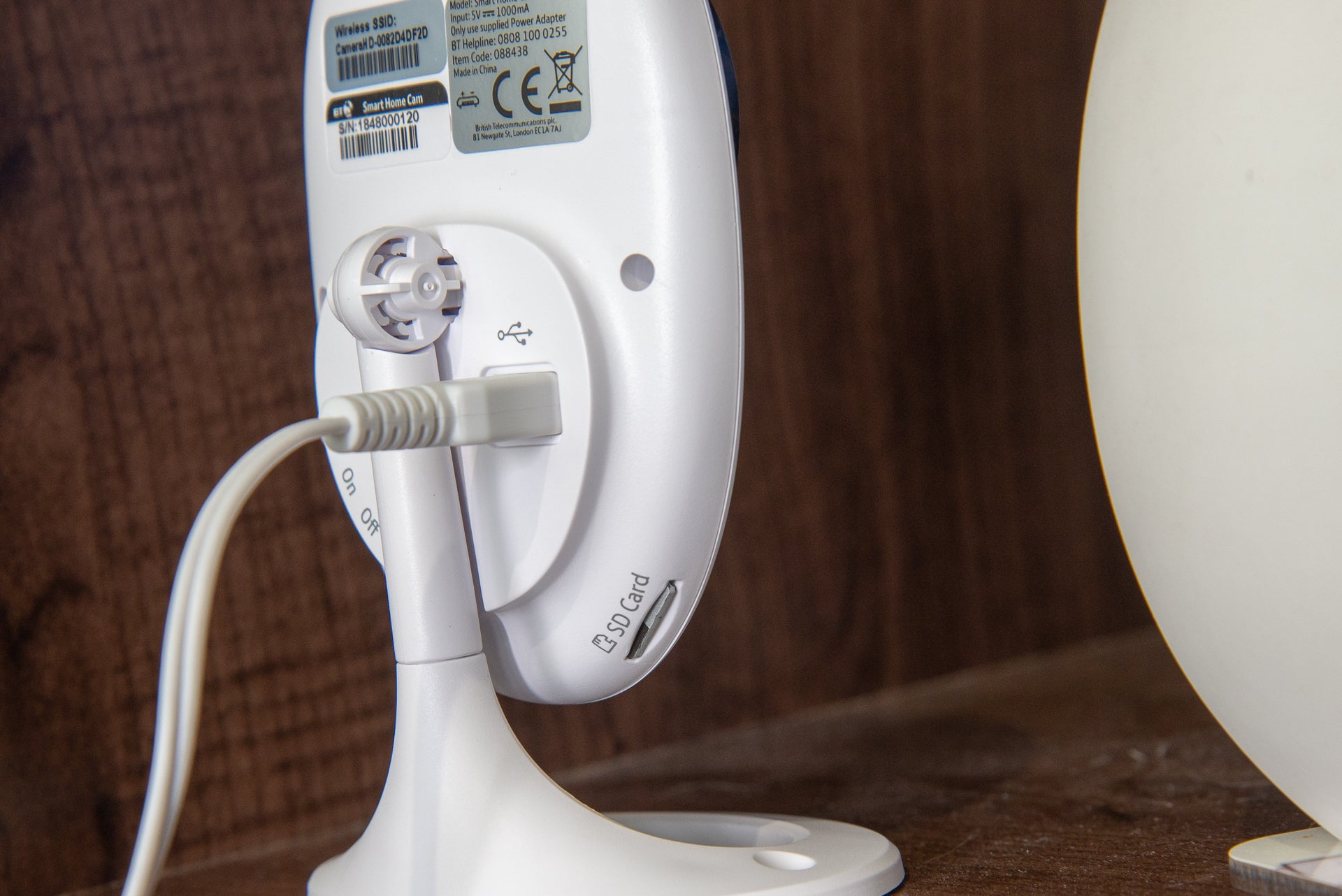 There are two options for motion detection: using the PIR sensor on the front, or letting the camera monitor the video stream. Using the PIR sensor is the default option and makes sense, since this option is less susceptible to false positives on such budget cameras – the sun casting moving shadows, for example. 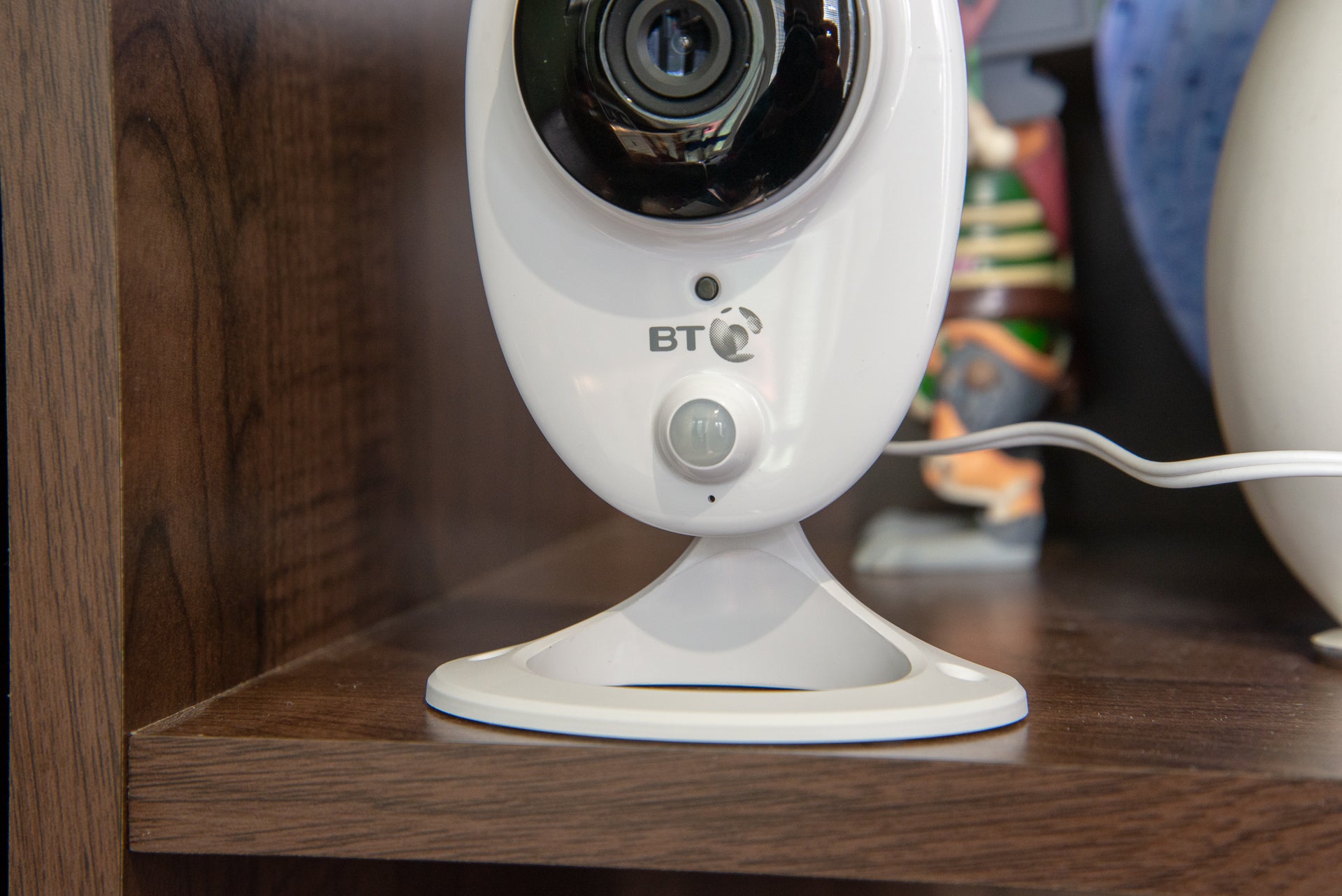 If you do go for standard motion detection, you can adjust the sensitivity; with the PIR option, there are no settings. It’s a shame that you can’t set activity zones with standard motion detection, focusing on an area that you’re specifically interested in. In this mode, I found that the camera triggered more alerts than in PIR mode. The competition, such as the Ring Stick Up Cam or the Nest Cam IQ are far smarter and don’t keep pinging you with alerts.

The camera can also monitor for background sound, with the option to adjust the sensitivity. This can be useful if you want your camera to listen out for anything suspicious going on in your home.

You can schedule when you want the camera to send notifications. The controls are a little clunky, but easy enough to get your head around. It’s a shame that there’s no geofencing option. Nor can you toggle the camera on or off from the app; if you want privacy, you have to physically turn off the camera using the switch on the side. Note, though, if you go out with the camera off then you won’t be able to turn it back on remotely. 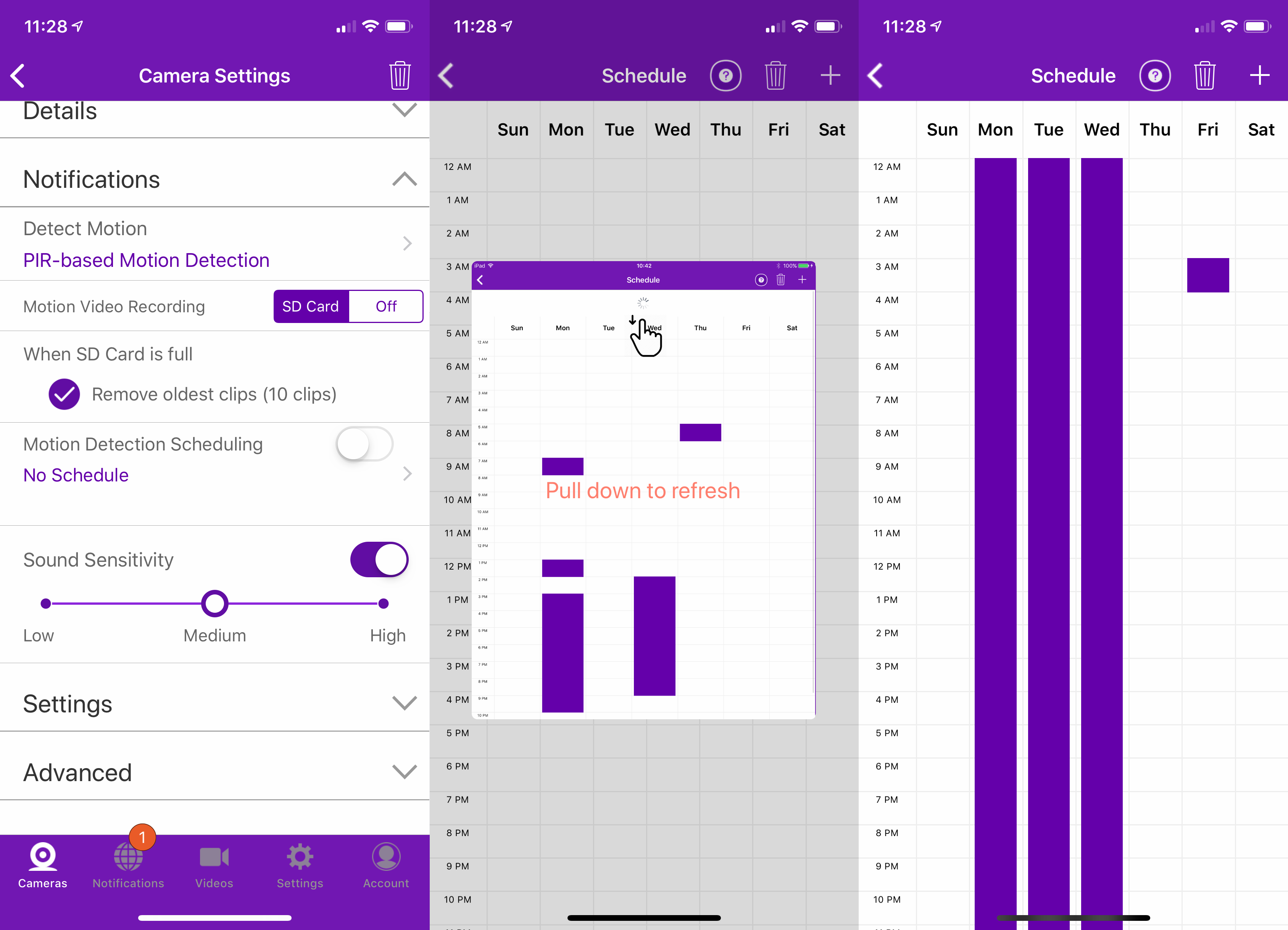 You can view the live stream from the app, and save a photo or video directly to your device. There’s a two-way talk option, so you can have a conversation with anyone inside your home. It works well enough, although the BT Smart Home Cam’s speaker is a little quiet and there’s a fair amount of delay through the app. There’s a section for playing music through the BT Smart Home Cam. There are five melodies to choose from, all of which have a naff child’s toy-like feel to them. These are the same melodies as used in BT’s baby monitor products, giving a clue as to how this product was developed.

These melodies are part of the BT Smart Home Cam’s attempt to also be a baby monitor, letting you play “soothing” tunes remotely. More useful is the background monitoring option, which lets you hear the audio stream of a camera when your phone’s on the homescreen or locked.

Notifications are sent to your smartphone and appear in the app’s Notifications section, complete with a thumbnail view caught at the same time. Tapping a notification should take you to the camera to view the live stream or, if available, recorded clip. In my experience, the system was very flaky and these options often timed out.

Alternatively, you can view footage directly from the camera’s live feed, Event History view. You can filter footage by day, but not time, making finding a specific clip tricky at times.

My biggest problem with the BT Smart Home Cam is how unreliable it proved when trying to connect to it. On numerous occasions the connection timed out and I had to resort to rebooting the camera. Even when it does work, the connection to the camera is very slow and the footage quite a long way behind real-time.

Streaming clips from the camera is just as flaky: sometimes the clip would play; other times it wouldn’t. You can try to download clips to your smartphone, but this didn’t always work either. I lost count of the times that I received a “success” message in the app, which really seemed to mean that I’d been sent back to the homescreen.

Motion detection was pretty good using the PIR sensor, with few false positives. As a result, the video stream was clean. However, not being able to turn the camera off through the app is frustrating: as soon as you get in front of the BT Smart Home Cam, you receive a flood of notifications about movement.

Sound detection has the same problems as on other cameras: you tend to get notifications for everything, even comparatively quiet sounds. In the end, I turned this option off.

Having only a 720p sensor shouldn’t be and issue, still providing sufficient detail. Unfortunately, the BT Smart Home Cam fails to deliver. Pixellated and soft, images suffer from high levels of compression and are therefore very poor. While it is possible to differentiate between people, it’s difficult to make out any distinguising marks in daylight. 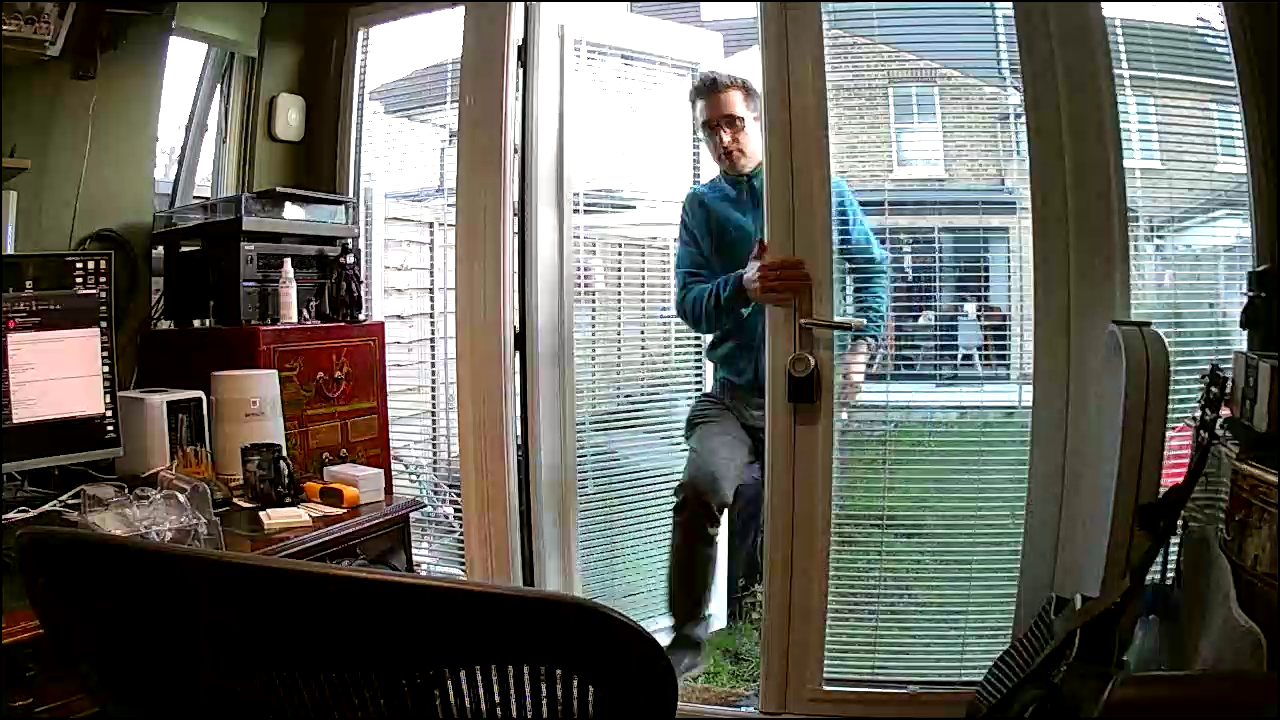 At night, the problems are similar. The BT Smart Home Cam turns on its IR lights but the image is very soft and pixellated. Again, fine detail is hard to work out, although you can distinguish between people. 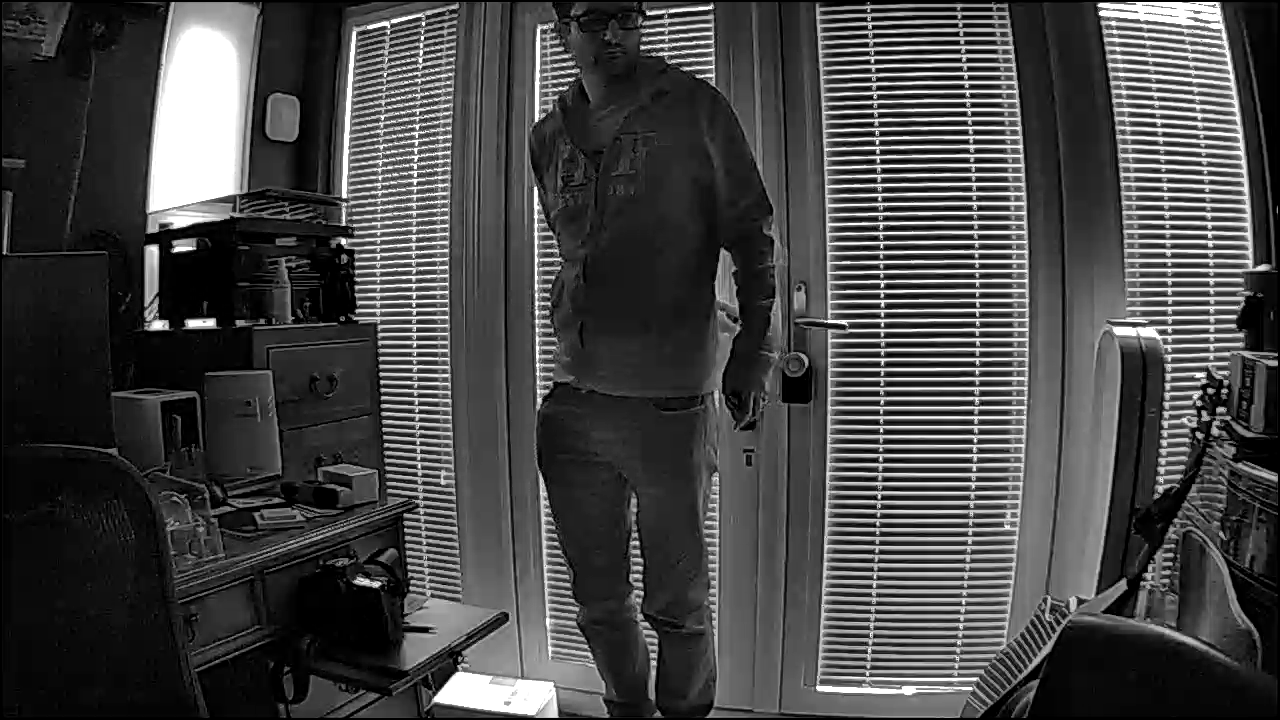 There’s the BT Smart Controls skill for Amazon Alexa and the Google Assistant, which offers some basic control over the camera. There’s no option to view the video stream on a screen-enabled smart assistant, such as the Google Home or Amazon Echo Show.

Instead, you can start and stop a random lullaby on the camera. I also couldn’t get the system to turn on motion recording, with Alexa telling me that the option wasn’t supported.

There’s also no IFTTT channel for toggling the BT Smart Home Cam on or off, or triggering other devices when motion is detected.

With its comparatively low price, the BT Smart Home Cam is one of the cheaper smart security cameras I’ve tested. For some, the optional background monitoring that turns the camera into a rudimentary baby monitor could be useful, if you’re after a temporary security camera and monitoring system.

However, the flaky app and lack of features detract. The Best security camera guide is full of better choices, but you may also want to look at the Neos Smart Cam, which is cheaper and offers free cloud storage.

Ultimately, the BT Smart Home Cam feels like a relic from a few years ago and isn’t up to the standard of modern cameras.

The baby monitor option is the the BT Smart Home Cam’s stand-out feature, but the clunky interface and poor video quality are a letdown.