A great standalone baby monitor with a large screen and useful sound monitor, the BT Smart Baby Monitor with 5-inch screen also offers optional Wi-Fi connectivity. While the app is a bit fiddly, it provides more options and a backup way of monitoring your baby.

What is the BT Smart Baby Monitor with 5-inch screen?

We were impressed by the BT Video Baby Monitor 6000, although lamenting the fact that it wasn’t a smart device. Step forward the BT Smart Baby Monitor with 5 inch screen, which does all of the jobs of the old model but is also able to connect to Wi-Fi to offer app-based monitoring.

In addition to its new smart features, this model all else you’d expect including sound sensors, push-to-talk, a huge display, automatic night vision and temperature sensors.

The BT Smart Baby Monitor with 5-inch screen comes in two parts. First, there’s the familiar 5-inch screen as used on the BT Video Baby Monitor 6000. That’s generously sized as far as baby monitors go, and has a handy flip-out stand so that you can place it on a desk to keep an eye on things. It’s made from rigid and tough-feeling plastic, which is ideal since this is the kind of product you’ll carry from room to room, and so are more likely to drop.

The front is home to a series of controls including volume controls, options to edit the menu settings and the push-to-talk button. The side of the screen features LEDs for the sound meter. There’s an integrated, rechargeable battery, with the display charged via the USB port on the rear. 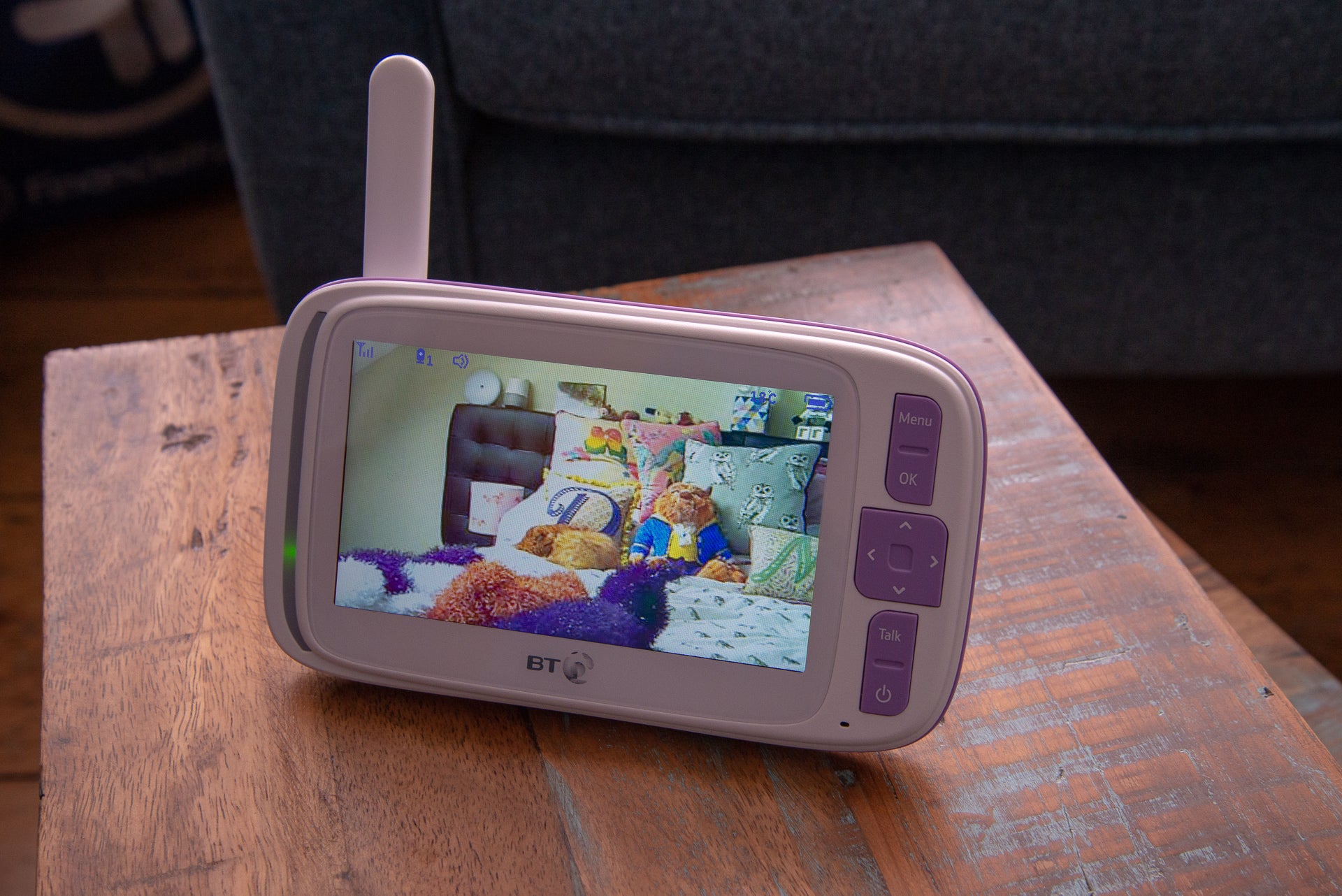 The second part of the system is the camera, which comes with a chunky and stable base that will even balance on the edge of a cot without falling down. If you prefer, you can wall-mount the camera permanently. Thanks to the camera’s ball joint, it’s easy to position to get the view you need. 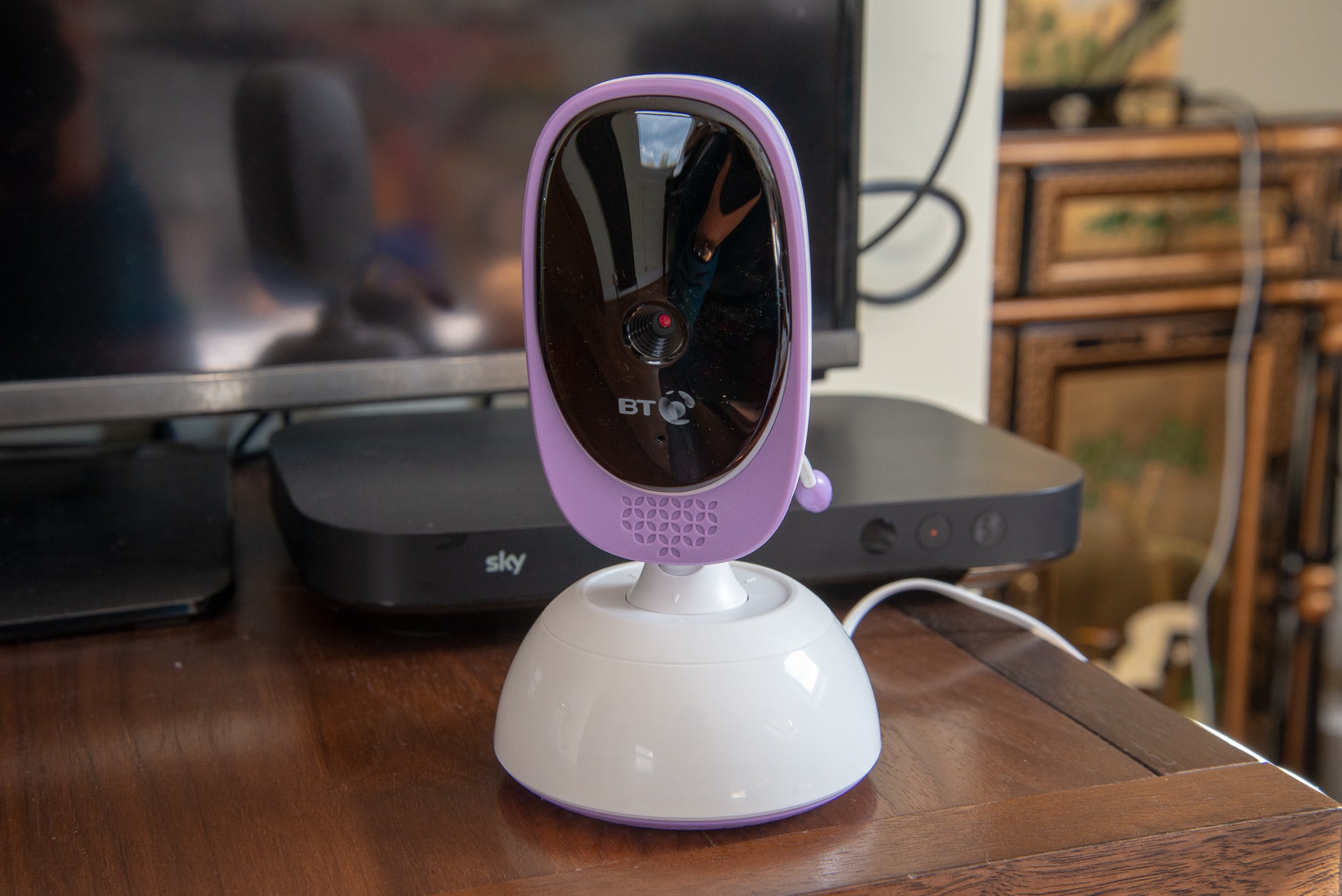 The sound sensors on the side of the 5-inch screen are brilliant. When the baby monitor is in standby mode, the LEDs light up to show you sound levels in the room. When they hit the red part, they indicate that there’s a lot of noise and it’s time to go and see baby or, at least, turn on the screen to see what’s going on. 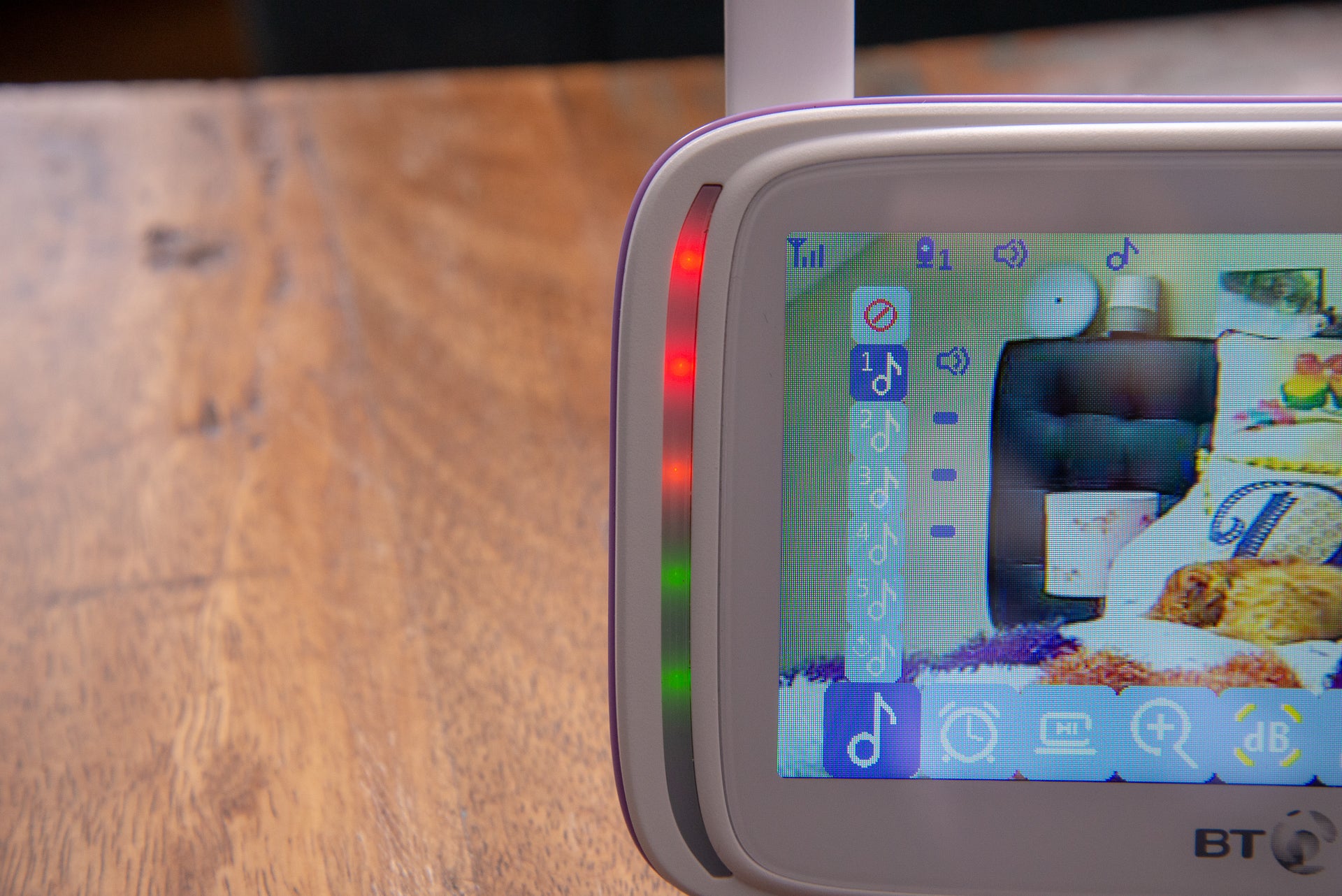 Push-to-talk lets you talk to your baby with a slight delay, although it will differ from child to child as to how they respond to the slightly robotic-sounding voice coming out of the strange device in their room.

The camera has a thermal sensor in it, which picks up the ambient temperature in the room, allowing you to gauge whether it’s too hot or too cold. The sensor may differ by a degree or two compared to a dedicated temperature sensor, but is still enough to give you a general idea. You can also play a series of melodies out of the camera, although they’re universally awful with a computer-generated tone to them.

With this model, you can connect your BT Smart Baby Monitor to Wi-Fi and then control it through the BT Smart Controls app – the same as used for the BT Smart Home Cam. This can be handy, as you get more range with the app and it means that two people can monitor the camera at the same time.

As well as viewing the stream, the app provides a few more options, including notifications for when the temperature goes above or below a certain point. It’s frustrating to set the option, however, as every time you increase or decrease the temperature levels the app displays Updating for a few seconds. That said, while you’re connected to the camera, you can record video clips and save photos directly to your phone. Via the background monitoring option in the app, you can turn your phone’s screen off and still get the audio feed, letting you monitor your baby without wasting battery life. 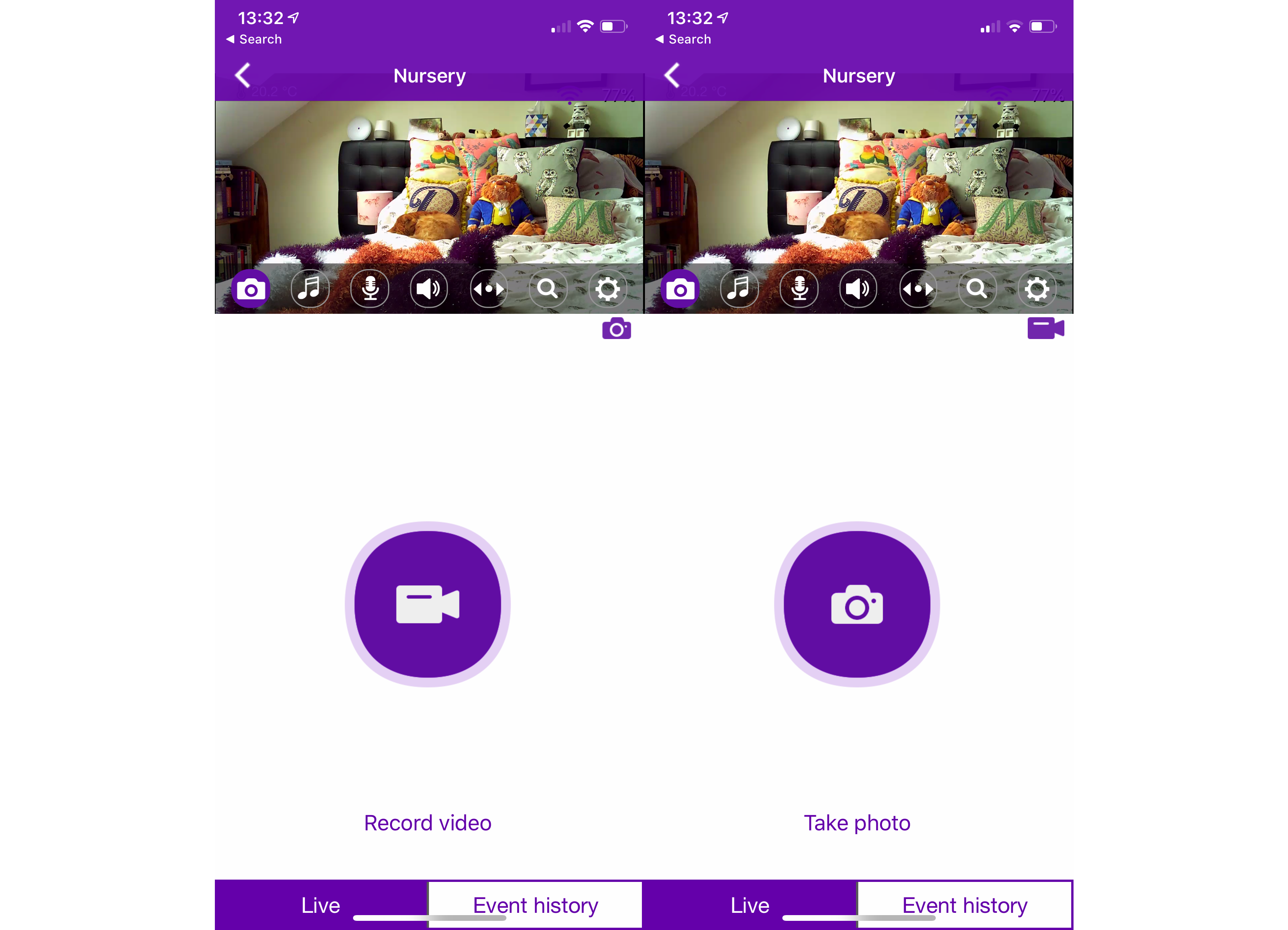 BT claims a range of 250 metres outside and 50 metres inside for the BT Smart Baby Monitor with 5-inch screen, although the composition of the building you’re in will have much to do with what it can actually achieve. Placing the camera in the loft room on the second floor, I found that the display wouldn’t connect at the rear of the kitchen. The distance (in height) and having to punch through old external walls were too much for the system. Moving out of the kitchen soon got the signal back.

Even so, the BT Smart Baby Monitor with 5-inch screen still offers better range than other baby monitors that Trusted Reviews has tested. With this version, at least you can use the app over Wi-Fi as a backup option, too.

While the display is large, quality isn’t great. It’s extremely reflective and the image looks quite low-quality thanks to the low-resolution 480 x 272 screen. It tends to zoom in on the image often, so you have to place the camera a little further back than you may initially perceive the best position. All that said, you can still see what’s going on, which is the most important thing; after all, this is a monitor, not a security camera. 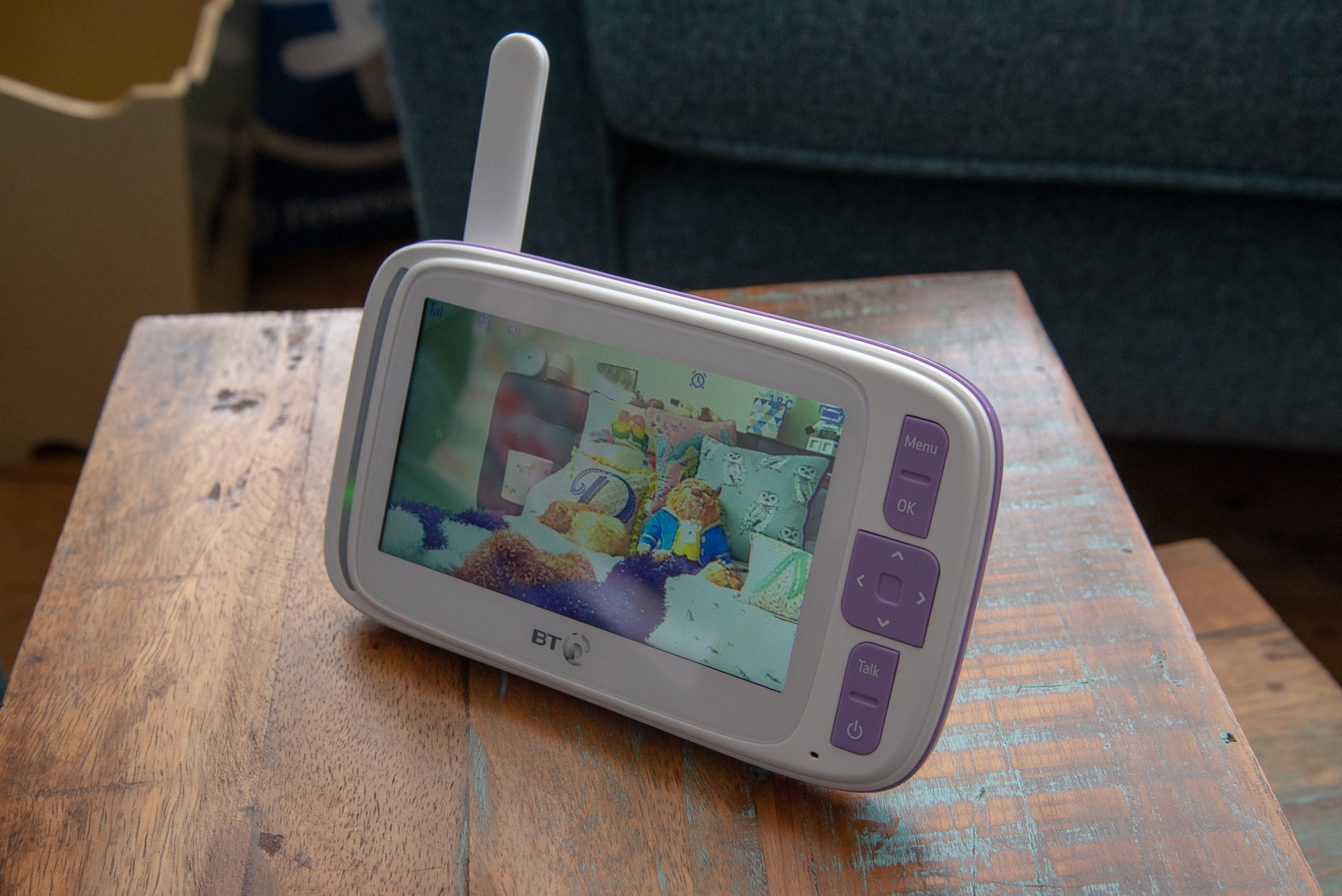 With the monitor, the response is much faster and closer to real-time. Using the app, there’s a delay between real movement and seeing that action on the screen. The app can also be unresponsive at times and when changing options the system can take some time to respond. For example, I couldn’t change the video quality slider as the app refused to respond to my touch for this control.

However, the video quality is far better, delivering a 720p image to your phone. Night-time quality is very good, too, as you can see from the day and night sample shots below. 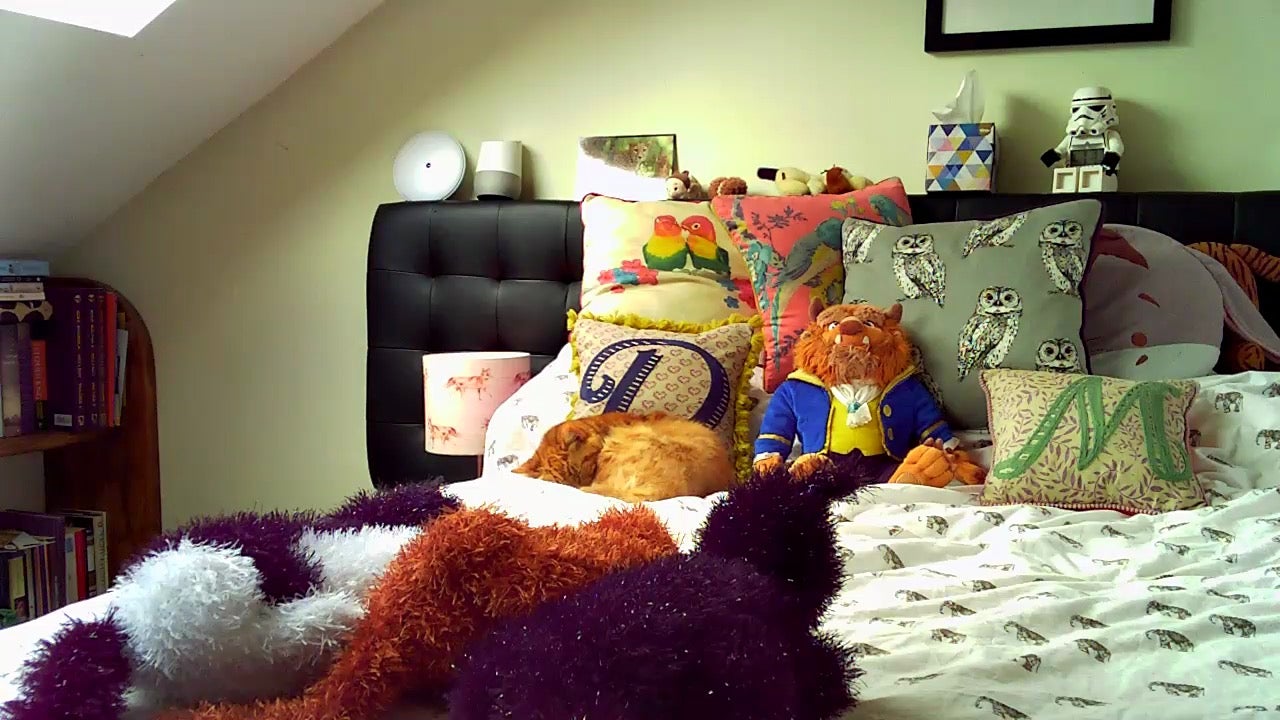 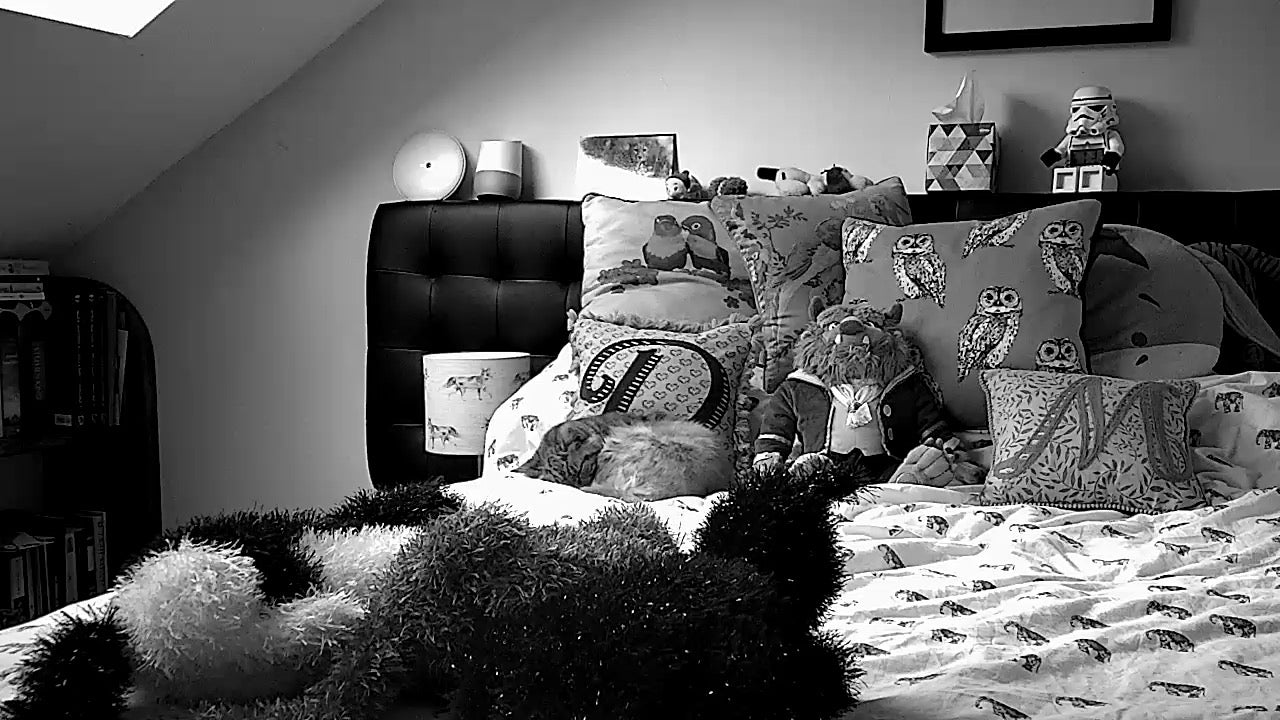 I like the sound sensors, which are super-sensitive to local noise but do a good job of filtering out background noise. A car driving past has no effect, but the slightest noise in the room jumps out. Testing in my office with the monitor on, the BT Smart Baby Monitor with 5-inch screen even picked up keystrokes as I typed.

Via the app, you can get motion notifications. The camera is sensitive to changes in light, such as shadows cast by clouds moving in front of the sun. However, as you’ll have the camera focused on one area in what will usually be a dark room, the slightly over-zealous motion detection shouldn’t be too much of a problem. You can always turn off this option if you find it annoying.

Claimed battery life is up to four hours for the monitor, although you can leave the monitor plugged in when you want. If you turn off the screen and just leave it on sound monitoring, then it should last through the night.

The BT Smart Baby Monitor with 5-inch screen has an Amazon Alexa and Google Assistant skill, although the controls are quite basic. You can get either voice assistant to relay the temperature, enable or disable motion detection and play a lullaby. It’s a shame that you can’t stream the video to a smart display, such as the Amazon Echo Show or Google Home Hub.

Why buy the BT Smart Baby Monitor with 5 inch screen?

If you don’t care about the smart features, then the BT Smart Video Baby Monitor 6000 is a little cheaper and has all of the same core functions as this model. Hunt around and you can pick up the BT Smart Baby Monitor with 5-inch screen for only £20 more.

While the BT Smart Controls App is a little frustrating and slow to use, it gets the basics right for baby monitoring, including the background mode. Adding Wi-Fi into the mix offers up more options. For example, if you’re in a hotel with Wi-Fi and the main monitor can’t get a signal, you may be able to connect via wireless. Even at home, it means that both parents can watch and listen in on their baby.

With the addition of Wi-Fi, what was the best baby monitor is now that little bit better.