An upgraded version of the company's original mesh system, the BT Mini Whole Home Wi-Fi has smaller discs making it easier to place. It's also one of the cheapest mesh systems I've reviewed. You don't get the fastest speeds nor the greatest set of features, but if you're looking for a cheap way to boost your Wi-Fi with a system that works with all routers, this mesh system is excellent value.

The original BT Whole Home Wi-Fi was one of my favourite mesh systems, as it was a cheap way to upgrade an existing home network. Today, the BT Mini Whole Home Wi-Fi is back to do the same thing, only with smaller satellites (called discs here).

Running on slightly older technology, this isn’t the fastest mesh system, but it’s one of the most flexible and one of the cheapest making it something of a bargain.

The new BT Mini Whole Home Wi-Fi is bought in packs of discs. I’ve got the three-pack here, which will suit most homes but you can buy it in two-, four-, five- and six-packs too. You can also buy additional discs if you want to expand an existing network.

All discs in a pack are identical. They’re small (120 x 120 x 50mm), so should be relatively easy to find a home for around your house. Around the back of each disc is a single Gigabit Ethernet port. The first satellite you connect must be wired, with the remaining satellites connecting via wireless. If range is a problem, then you can use Ethernet to connect satellites together. 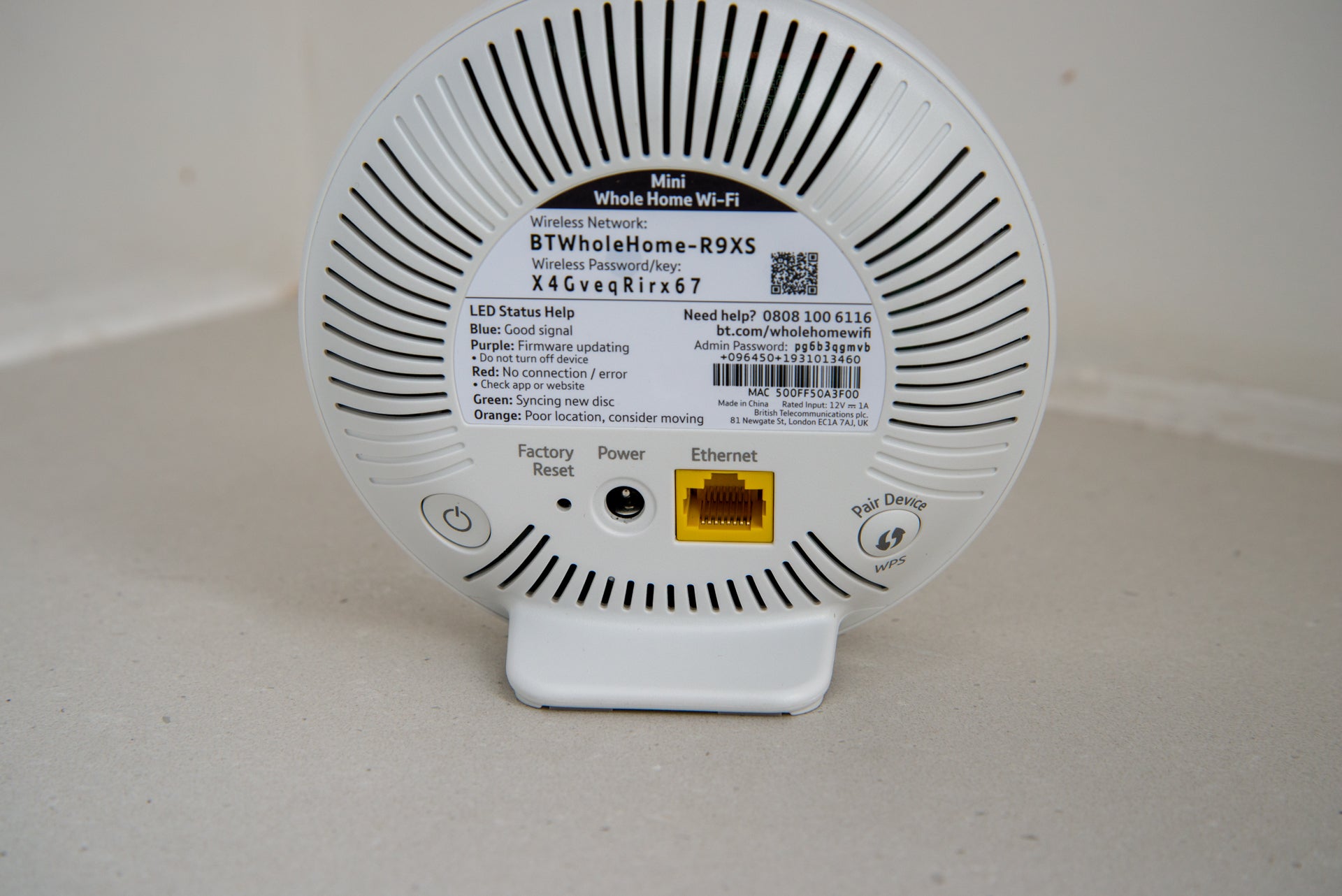 The rear of the satellite also tells you what the various LED colours mean, which makes things easier and should mean that you don’t need to turn to the manual or Google very often.

The BT Mini Whole Home Wi-Fi is easy to set up. Just plug the first disc in via Ethernet to your router and then fire up the smartphone app and follow the instructions.

I found that the app couldn’t find the additional satellites during set up. However, I quit the ‘add satellite’ option and the satellites then connected and appeared on the home page. I believe that this is because the satellites come pre-connected as they all shipped in the same package. 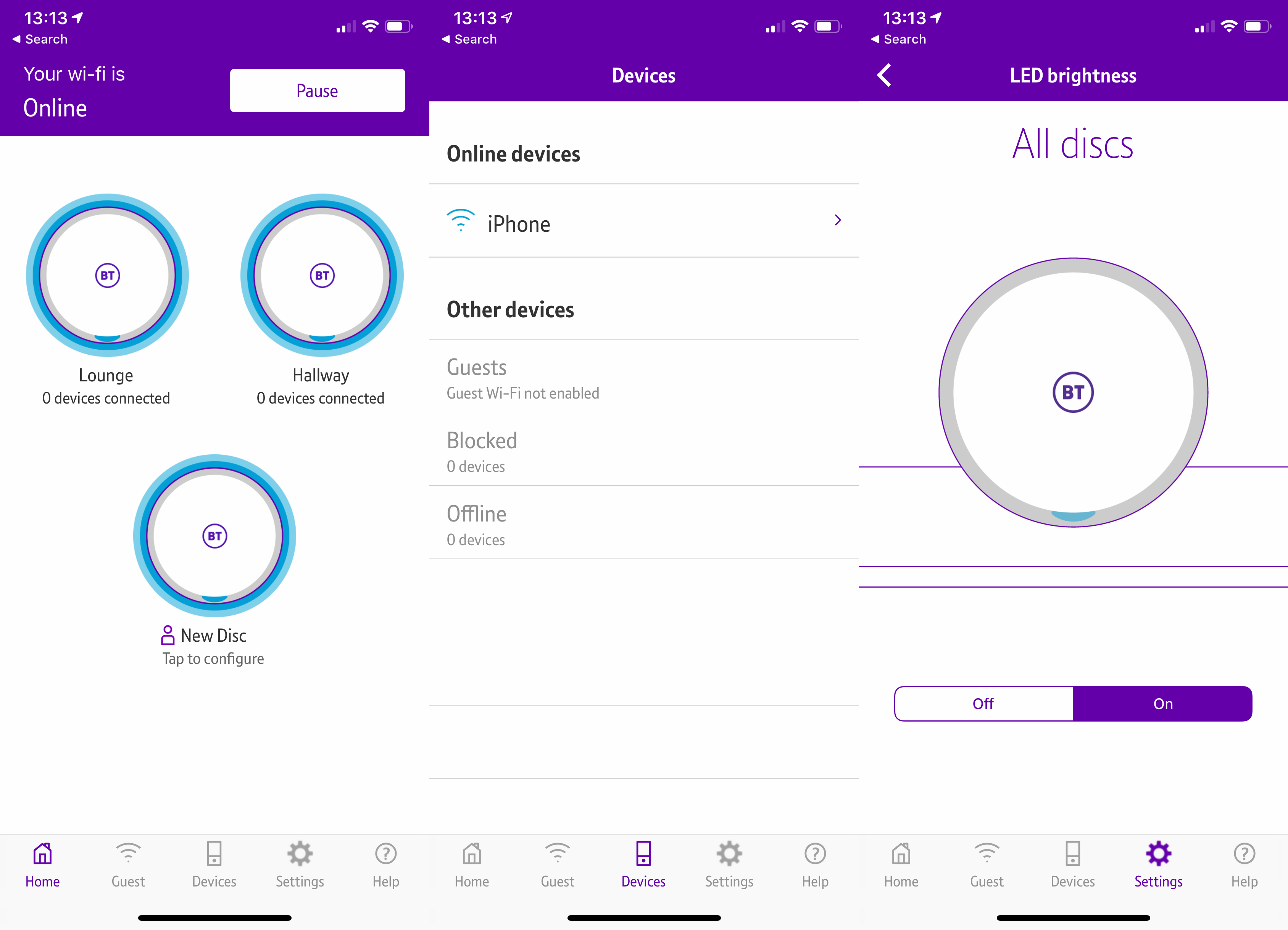 If you’re used to other mesh systems, the BT Mini Whole Home Wi-Fi seems to lack a lot of features: there are no parental controls nor advanced security features beyond blocking individual clients. This is because it connects to and works with your existing router; think of this system as an upgrade for your Wi-Fi rather than a standalone alternative.

The advantage of this system is that you can leave your existing router as is (although it makes sense to turn off its wireless). As a result, it will work with any broadband connection.

If you have BT Broadband already, then BT recommends that you upgrade to its BT Complete Wi-Fi system, which gets you a new router as well as a full mesh system.

Via the app, you can control the satellite’s LEDs (I recommend turning them off), and you can change the network name and password, as well as enabling the guest network. If you want to change the channels that the networks use, you have to connect to the web interface. 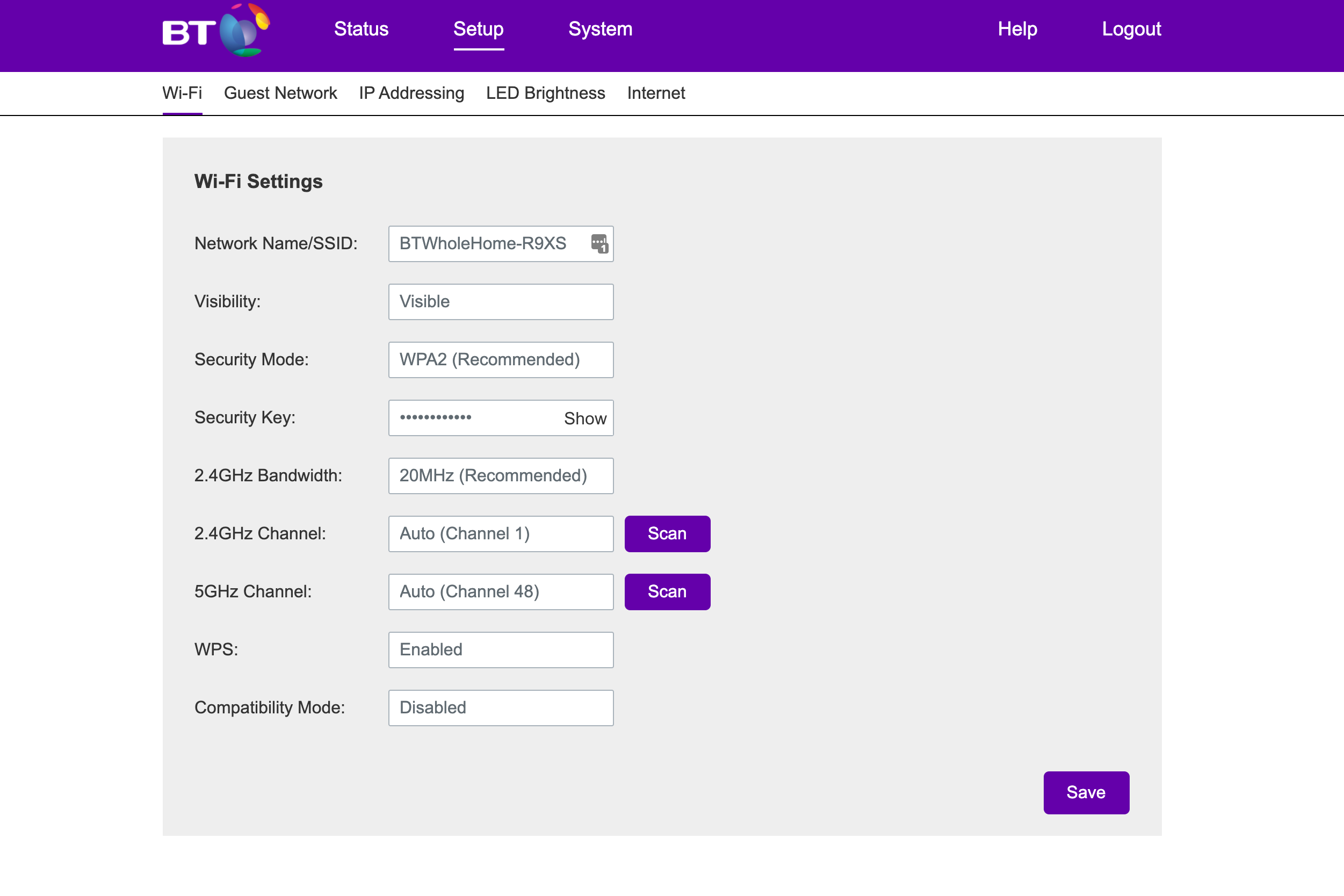 Specs for this product are basic, with the BT Mini Whole Home Wi-Fi running the Wi-Fi 5 standard. The network has an 866Mbps 5GHz network and a 300Mbps 2.4GHz network, although these networks are also used for the connection between discs as well as connecting clients.

Performance isn’t the top priority for this product, and it’s more about getting reliable Wi-Fi throughout your home. That said, it’s far from slow, managing an average of at 224.43Mbps close range, 218.72Mbps on the first floor and 148.89Mbps on the second floor.

These tests used two of the satellites, but I placed the third in the kitchen at the back of the house where it’s harder to get good reception. Here I got an average throughput of 54.55Mbps, giving me Wi-Fi where I didn’t have it originally. Running Ethernet to the kitchen improved things more, with throughputs similar to those at close range. 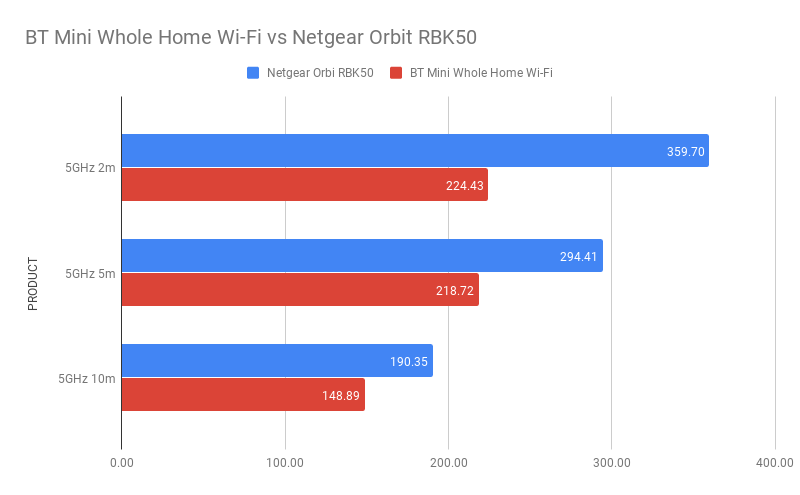 Should I buy the BT Mini Whole Home Wi-Fi?

There are faster and more feature-rich mesh systems out there, such as the Netgear Orbi RBK50. If you can replace your existing router and have the cash, Netgear’s system is a better choice.

But if you’re on a tighter budget and don’t want to mess with your existing router, then the BT Mini Whole Home Wi-Fi is a neat, cheap and easily upgradeable mesh system. It may not be the fastest, but if strong wireless everywhere is your main objective, this well-priced mesh system is great.