BT has nailed the design, features and setup so what about performance? Happily, BT has aced that as well. 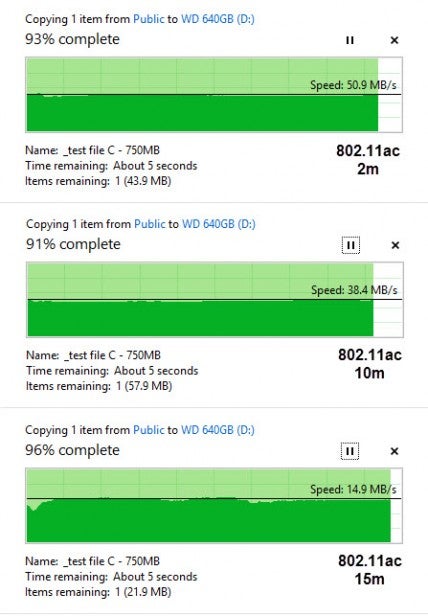 Compared to the Linksys EA6900, our current flagship, it is convincingly beaten (76.4MBps, 72.3MBps and 46MBps) but the Home Hub 5’s speeds hold up against most 802.11ac routers you can buy. It also outperforms EE’s Bright Box 2 – the only other 802.11ac ISP-supplied router currently available – besting it by 10 per cent at close range and a hefty 40 per cent at 15m. That’s the advantage of a 3×3 antenna array.

For those without wireless ac in their PC it is worth noting BT sells an 802.11ac dongle separately (£34.99) but, like all wireless dongles, this is a 2×2 antenna device and significantly less powerful than the 3×3 Asus PCE-AC68 wireless adaptor we use in our test setup.

With the dongle we found wireless ac speeds maxed out around 30MBps (240Mbps), which is typical for a dongle and perfectly illustrates that with 802.11ac routers these days most bottlenecks come from our wireless receivers rather than the routers themselves. 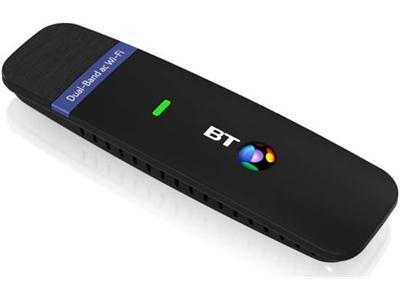 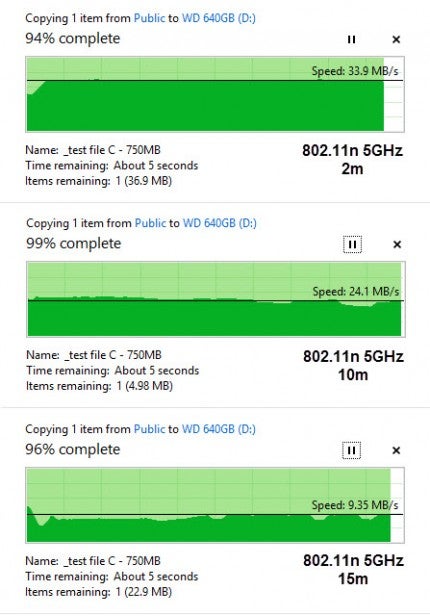 Against the Bright Box 2 peak performance is 50 per cent better while it doubled the speed of Virgin’s ageing new Super Hub (it was always a bad name) and more than doubles the results of the Home Hub 4.

This will be of great immediate benefit since 802.11ac is still gaining a foothold, but 5GHz 802.11n is in nearly all phones, tablets and laptops of the last few years. As for the BT dongle, it recorded respectable peaks of 24MBps (192Mbps) at close range and kept up at distance.

In fairness, the bottleneck of 2.4GHz wireless n means most speeds are bunched close together, but it still beats the Virgin new Super Hub, the Home Hub 4, PlusNet’s TG582n and the TalkTalk DSL-3780 while it doubles the performance of the woeful Sky Hub.

The Home Hub 5’s USB performance is less impressive. Speeds of just 2.12MBps (16.96Mbps) are half that of the EE BrightBox 2, but many ISP-supplied routers don’t even offer USB connections and its speed is fast enough to stream HD video.

Should I buy the BT Home Hub 5?

The BT Shop also sells the Home Hub 5 directly for £129 and while this is still very well priced (given it packs in a VDSL modem) there seems little reason for any interested party to pick this option. Yes, some users on rival broadband networks may be tempted to buy it, but BT makes no promises it will be compatible with them.

In the wider context of third-party rivals the Home Home 5 is only left standing by the Linksys EA6900 and Asus RT-AC68U. They retail for £169.99 and £189.99 respectively and don’t integrate a modem. Speed freaks will stick with them, but for the mainstream user BT just took ISP routers to a whole new level.

The Home Hub 5 is fifth time lucky for BT. It delivers superb performance in an attractive package, has a simple setup and a bargain price tag. It can’t outpace the fastest 802.11ac routers but it stands toe-to-toe with many while far costing less, especially considering there’s a VDSL modem inside. The BT Home Hub 5 redefines what we should expect from an ISP supplied router. Until rivals respond, it leaves them all eating its dust.