For a game that at times gushes with pure beauty, it serves as a stark contrast that Brothers: A Tale of Two Sons – the latest iOS release from Swedish outfit Starbreeze Studios – opens with several minutes loaded with sheer tragedy.

Still mourning the drowning of their mother – depicted fairly explicitly within Brothers’ opening cut scene – the two siblings referenced in the game’s name then suddenly find themselves fending for their sick father, carting him to the local doctor (quite literally) before setting out on an adventure to find the medicine needed to bring him round. The bones of this adventure focus on your ability to control both brothers Naiee and Naia simultaneously, using virtual thumbsticks on each side of the screen to both guide them around the landscape and interact with its elements.

And so the partnership between the two kins begins, with your job being to escort them – almost hand in hand at times – through a linear, but expansive and ultimately striking world that feels a little bit Hansel and Gretel, a little bit Harry Potter. It’s a world seemingly set in the medieval past, but one that also feels a touch alien, perhaps best illustrated by the nonsense language spoken by all of the game’s characters – the sounds uttered by the population having more in common with the cute and cuddly mutterings of the Teletubbies than any real prose. 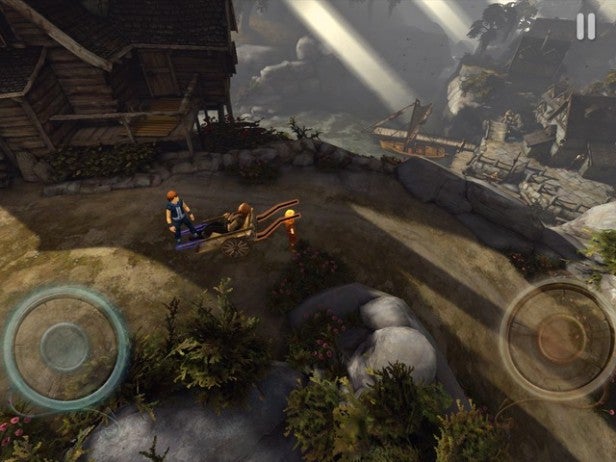 Endless reams of script would be wasted here, however, because Brothers: A Tale of Two Sons is somewhat self explanatory. Though wearing the clothes of a pure adventure title, play actually takes the form of simple puzzles all pieced together in a 3D environment. As you might expect, each brother has his own skillset (the older, stronger boy able to do the heavy lifting, pushing or pulling, with the smaller of the two better at slipping through small gaps) with the trick being to use each brother where appropriate.

Working out just when that is, and in what order you need to move each brother, is the constant problem that needs to be solved from beginning to end and, though most of the hurdles in your way take not much longer than a moment or two’s thought to piece together, so charming is the game’s delivery that it’s a pleasure to drift through Brothers’ weaving and winding levels. That’s not to say that Starbreeze’s latest is without the odd hitch, however. 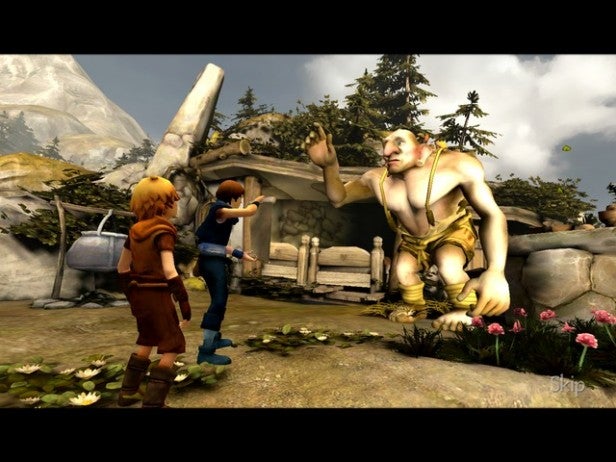 Indeed, perhaps the biggest problem with the mobile version of Brothers: A Tale of Two Sons is that it just doesn’t feel especially mobile. By default, the two thumbsticks handle both movement and interaction, with holding your thumb down allowing you to make use of any level architecture that glows – the game’s signal that it can be toyed with. What irritates, however, is that this never feels like a comfortable or even logical set up, with any crossover between the paths of the brothers in the game completely upsetting the idea of having one side of the screen assigned to each sibling.

In short, when Naiee – whose thumbstick sits on the right – wanders over to the left, training your brain to understand that he’s still controlled by the right thumbstick is less of a challenge and more of an ordeal. Even shaking up the controls by assigning a specific action button so play doesn’t constantly revolve around the virtual thumbsticks doesn’t especially improve the situation; as with many mobile games that have first made their name on console or PC, the controls feel exactly like the compromise they are. 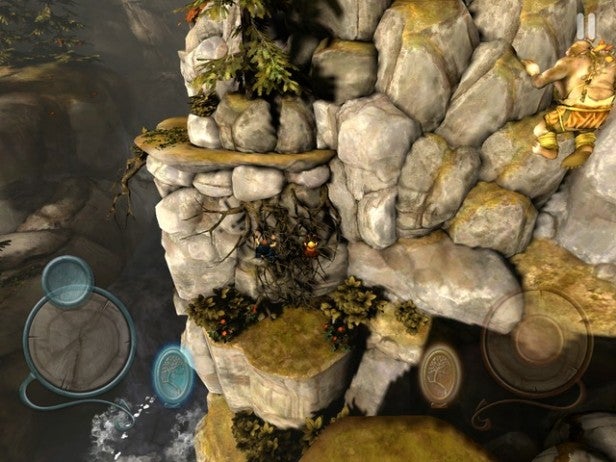 There’s no denying, however, that though the controls don’t show Brothers: A Tale of Two Sons in the best light, they don’t overshadow the fact that this is a game of real quality, whatever format it rolls onto. Though the inclination may be to pick the game up on console or PC, if iOS or Android are your only ports of call, the slightly dodgy controls aren’t enough of a barrier to entry to rule out a download altogether, with the composition of beauty and adversity serving as Brothers’ captivating signature.

Verdict
The controls are far from ideal, but Brothers: A Tale of Two Sons benefits from being a product of real quality, tasking players with overcoming a series of simple but inventive puzzles within a beautiful 3D environment. The hook? Controlling two characters at once, using their relative strengths to breeze through a world teeming with life and packed full of charm.