The MFC-J615W is one of a new set of inkjet all-in-ones from Brother, which slots in the higher end of its copious range. In feature terms, it’s more of the same and it’s designed for the home and small office, with both fax and photo handling to add to the core function trio of print, copy and scan.


All decked out in high-gloss and textured black, this machine follows the lines of many others in Brother’s portfolio, with the gently sloping top panel sliding down to a full-width control panel across the front and incorporating a 30-sheet Automatic Document Feeder (ADF) for copies, scans and faxes. 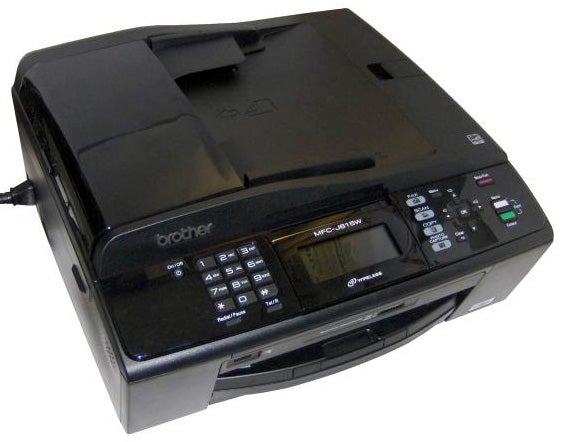 Brother’s ADFs work in the opposite direction from most others, feeding from the top surface of the flatbed cover to a pair of supports directly above. There’s no reason why this design shouldn’t work just as well as the top-to-bottom approach used by most other makers.


The control panel is simplified, with only the buttons needed to perform the machine’s several functions. There’s a number pad on the left-hand side for fax dialling and passcode entry when setting up a wireless connection. To the right of the LCD panel are four illuminated buttons for fax, scan, copy and photo capture. To the right of these is a diamond of navigation keys, with an OK button in the centre, and on the extreme right are two buttons for colour and mono jobs and a single stop key.

The widescreen LCD has an 81mm diagonal, a bit smaller than the 84mm screen that became a Brother signature design. It’s full colour as before and still benefits from being able to show photo thumbnails and selection choices simultaneously side by side.


A 100-sheet plain paper cassette slides into the front of the machine and there’s a 20-sheet photo paper tray mounted in its lid. To engage the tray you have to pull out the cassette and slide it forward manually – it’s a shame it isn’t automatically selected when you choose to print photos. 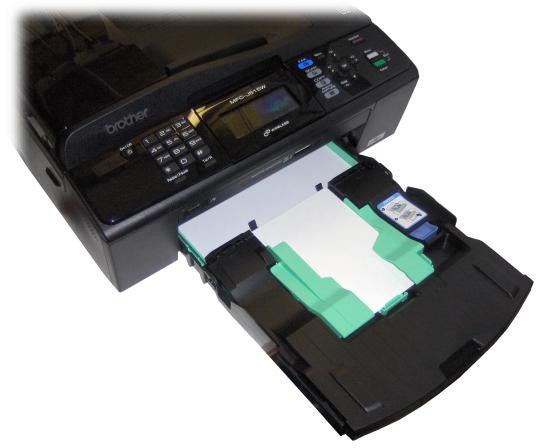 At the back to the left-hand side is the power input and two other sockets for fax line and third-party handset, but the USB connection has to be reeved around inside the machine as usual, which is more awkward than a socket at the rear.


Many people who buy the MFC-J615W will choose to connect via wireless and this is an easy two-stage installation. You simply enter any security passcode to connect the printer to your wireless router and then locate the printer from the setup software on the PC you’re using.


Drivers are provided for Windows and OS X and Brother provides separate Linux support via direct download. There’s also a copy of the company’s own multifunction suite and Nuance’s PaperPort 11SE.

Many printer companies have been caught up in the spiralling hype of print speeds, but Brother is among the worst for exaggeration. It claims speeds of 35ppm for black and 28ppm for colour, both in fast draft mode. However, when we printed our five-page draft document, we only saw 9.1ppm, less than a third of the rated speed. In normal mode, the printer managed 3.1ppm in black and 2.6ppm in colour, around a tenth of the claimed speeds. 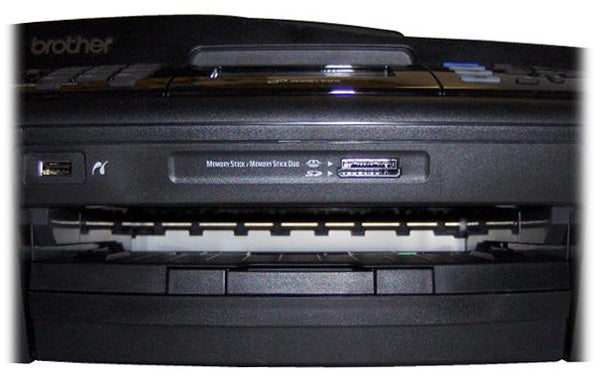 Scans and copies are easy to set up and execute, and the quality of scans at the 1,200dpi resolution is acceptable for small office use, though photos suffer from some colour distortions. This is also visible in photocopies, which come through much paler than the originals from which they’re taken.


Black text prints are OK, though even to the naked eye you can see rough edges caused by ink soaking into the paper. This is more noticeable with bold characters. Fast mode text, effectively draft, is paler but still quite well formed. 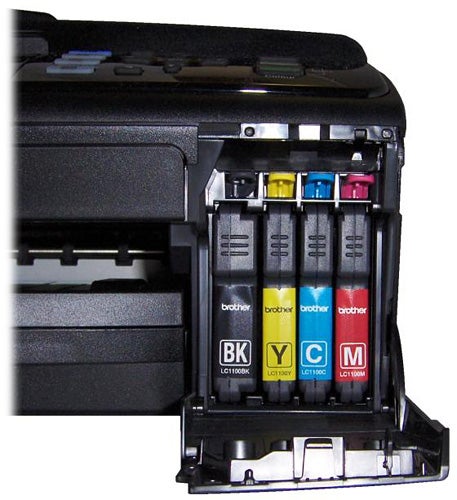 Our initial black text and colour graphic prints showed quite a bit of banding and the colours looked very muddy. A full clean of the colour heads, particularly the yellow, sorted this out, but given this was a brand-new machine and not one that had done a round of reviews, we remained disappointed. After cleaning, photos came out bright and well-balanced, though shadowed areas were over-dark.


The MFC-J615W can only take standard yield cartridges, giving running costs of 2.4p for black and 9.2p the colour, at the best cartridge prices we could find on the Internet. The black cost is reasonable for this class of machine, though the colour is a little high in comparison with some of its rivals. 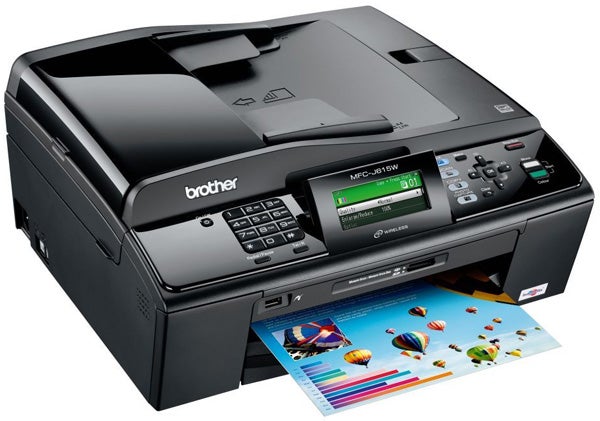 
This is another workable all-in-one from Brother and offers a similar value proposition to many other machines in its inkjet range. However, there’s little obvious improvement in speed, print quality or feature set over what has gone before and it would be good to see some innovation in Brother’s new models. It looks pricey against some of its competitors, too.