Brother already has a large range of small, neat all-in-ones, so the introduction of the MFC-J415W provokes the initial reaction – why another? A look through the company’s website shows it does fit, though, just below the wide-screen MFC-490CW.


The same, gently-curved top surface that marks out many Brother all-in-ones does for this machine, too, though its 15-sheet Automatic Document Feeder (ADF) breaks the lines up a bit. In front of the scanner lid there’s a full-width control panel with a numeric pad on the left-hand side for fax dialling – there are no single-click dial buttons, but there are 40 speed-dials. 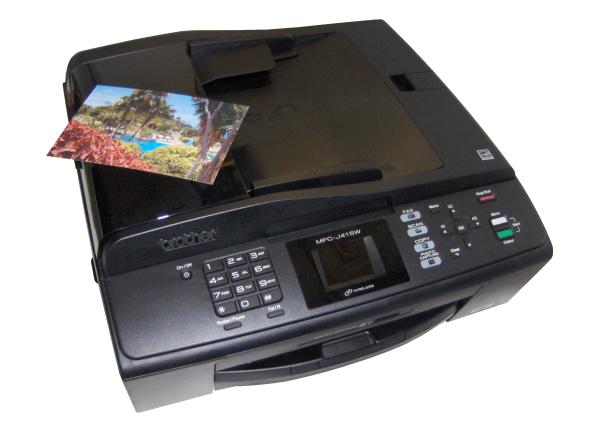 On the right, in a column, are four illuminated mode buttons for fax, scan, copy and photo capture, as well as a menu navigation cross and buttons to start and stop jobs. In the centre of the panel is a small LCD display with a large surround.


Being used to seeing the widescreen LCDs Brother typically uses on its higher end machines, this one looks a bit lost, but it serves its purpose and is better than the two-line mono displays, which are found on less-expensive models. 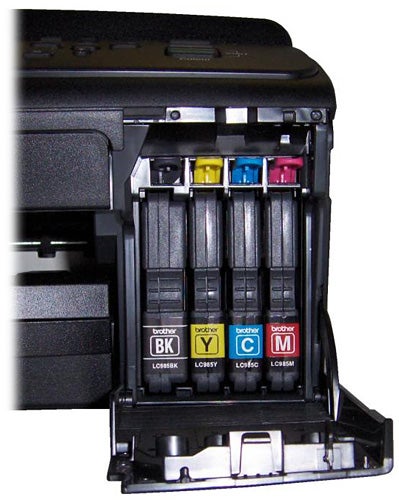 In the front lip of the machine are two memory card slots, which between them support SD, MemoryStick and xD cards, but there’s no PictBridge support. Similarly, although the machine can be connected wirelessly, there isn’t an Ethernet port, just one for USB. You have to guide the USB cable along grooves inside the machine to plug it in internally, something common in Brother machines and of more advantage to the manufacturer than the customer.


There’s a single paper cassette, which pulls out from the front and can take up to 100 sheets of plain paper. Alternatively, you can use this for photo blanks, but there’s no way to load both types of paper simultaneously.


The four ink cartridges plug in behind a cover to the right of the paper cassette, in traditional Brother manner, and software installs from the supplied CD without problem. Secure connection to a wireless network is reasonably straightforward, as you can enter the passcode via the numeric pad on the control panel.


Brother provides a copy of the Presto PageManager document handling application, as well is its own suite of all-in-one software.

The print speeds quoted in the spec sheet are as unrealistic as ever. Brother quotes 35ppm for black print and 28ppm for colour. We saw 2.9ppm on our five-page text print and 3.1ppm on the 20-page document. The maximum we got out of the machine was 8.3ppm in draft mode, still less than a quarter of the rated speed. We know Brother isn’t alone in hyping speeds, but isn’t it time all makers started quoting ISO speed ratings, which bear some resemblance to what a customer will see?

Copy speeds were more reasonable, with a single-page colour copy taking 30 seconds and a five-page black text document from the ADF completing in 43 seconds. A 15 x 10cm photo from a PC took a very respectable 36 seconds, but one from an SD card took a sloth-like three minutes.


Print quality is variable. Photo prints are reasonably well detailed, but there’s a graininess to areas of solid colour and particularly in shadowed areas of images, which isn’t down to any fault in the camera that took them.


Colour graphics on plain paper are solid, though colours are insipid when compared with other machines at a similar price. This is even more pronounced when you take a photocopy of a colour original; resulting prints can look very faded. Black text over colour is well registered, though, with very little haloing. 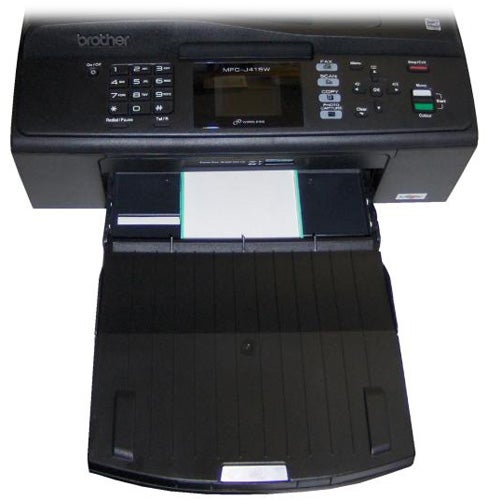 Black text is clear and there are no signs of feathering or misalignments of head passes. Draft text, however, is both very faint and not particularly well-formed. We don’t believe many users would be happy to use draft mode on a regular basis, even if it does save time and ink.


This is a new machine and at the time of writing, the only prices available for the ink cartridges are suggested retail prices (SRPs). When the cartridges start to be discounted, you can expect running costs to drop. Currently, though, we calculate a black page cost of 6.15p and a colour page cost of 16.5p. Both these figures are very high, so even after applying the kind of discounts Brother consumables attract, this isn’t going to be a cheap device to run.


Brother’s MFC-J415W is pretty much more of the same, with no appreciable improvement in print quality, speed or running costs over earlier models. The slight cost reduction over the widescreen model further up the range is probably not enough to warrant making the saving. It would be good to see a new generation of Brother print engine addressing some of its current shortcomings.