In an office where size matters, the A3 printer is king. You don’t have to be a graphics professional to appreciate the advantages of paper twice as big as the ubiquitous A4. Anybody who produces any booklets or newsletters at A4 will appreciate being able to print an A4 spread in one A3 pass and fold it down. Poster and notices printed at the larger size are also useful. Brother has started rolling a ball we suspect several other companies will follow in the next year, by introducing the MFC-6490CW, a colour inkjet all-in-one which can print, copy, scan and fax at A3.


Looking much like any inkjet all-in-one, but twice as big, Brother has used the extra space sensibly. The large flatbed has a 50-sheet Auto Document Feeder (ADF) on top, with a neat, high-gloss panel which unfolds to reveal the paper guides. The lid to the scanner is big – it has to be for an A3 flatbed – but why does it only open to 45 degrees, instead of right up to the vertical? It’s hardly going to overbalance a machine of this size. 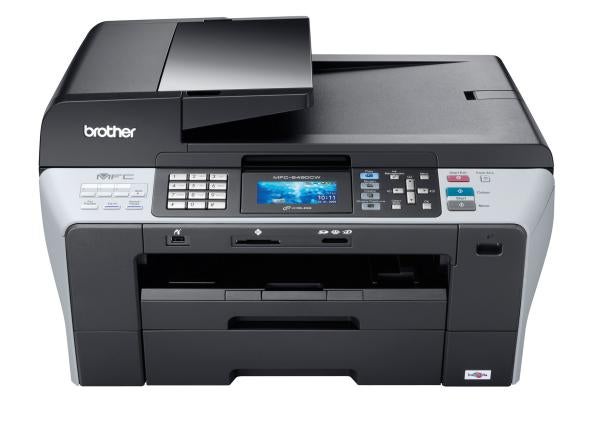 The control panel at the front includes a widescreen LCD. This is such a sensible way of enlarging a printer’s display, it’s worth a brief description. Brother has developed an LCD with an 84mm diagonal, but with an aspect ratio wider than a 16:9 TV. This means it can be effectively divided into two displays side-by-side, showing, for instance, a photo thumbnail from a memory card and the options offered for selecting and printing it, without having to overlay one on the other.


Set into the front lip of the control panel are memory card slots for the standard card types and a PictBridge socket. Below the panel are two paper trays, the bottom one taking up to 250 sheets and the top one a further 150. Both are multi-size bins, taking A4 or A3 paper, and the top one can go right down to 15 x 10cm, for photo blanks.


Unusually, and slightly untidily, the mains cable, fax and phone leads connect in on the left-hand side and the USB and network leads have to feed round inside the printer, to sockets just under the scanner.


The ink cartridges plug into a bay on the right of the front panel, once you’ve swung down a small hatch cover on the right. The printer runs through a one-off charging cycle of around five minutes, when you plug in a new cartridge.


Brother provides its ControlCenter 3 software, which handles scanning, OCR and downloading of photos, as well as printing. The machine can be used quite well from the control panel, too, but the menu hierarchy isn’t all it could be.


For example, the button marked Clear/Back in the navigation button group can’t be used repeatedly to back out of menus to the status screen. Instead, you have to use the Stop/Exit button, which is grouped with the black and colour copy keys – hardly intuitive. The machine emits three loud beeps whenever you hit an invalid key, too, which appears to be a Pablovian tactic to stop you changing settings.


Brother is clearly not aware of this concept and just pops up ‘wrong paper size’ messages until you’re ready to hit it with something heavy and pointed. You have to explicitly tell it from the front panel which paper sizes are stashed in each tray and select the correct tray in the print driver to send the document to. This means everybody on any network linked to the machine needs to know which tray holds which paper size and be instructed to select the correct tray whenever they print. Wouldn’t you like to be that IT support person? 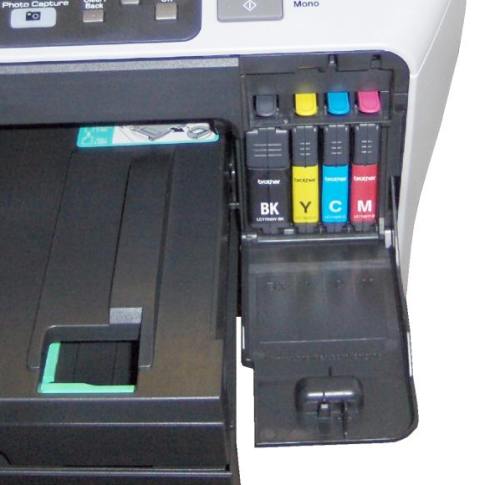 Print speeds from our standard tests came out at 4.17ppm for black print and 2.68ppm for colour at A4, so way below the draft mode 30ppm and 28ppm quoted by Brother. Move up to A3 prints and a five-page, black text print takes 1:53, just 2.7ppm.


An A3 copy took around half a minute and, unexpectedly, was around 15 seconds quicker than an A4 one. 15 x 10cm photo prints took a reasonable 1:40, unless in ‘Highest’ print quality, when they took over 3:45. This isn’t a particularly quick printer, though it is quiet while printing.


There’s not a lot of advantage in choosing highest print quality, as photo quality – the next level down – is hard to tell from it. Both print modes produce very naturally coloured photo prints with high levels of detail and smoothly gradated tints. We spotted details in our test prints which often aren’t well delineated from standard consumer inkjets.

There are two capacities of cartridges for the Brother machine and, as usual, we used the higher yield versions to show the best economies. We produced figures of 3.3p for black print and 8.23p for colour, including paper costs and VAT. This puts the machine in the middle of the field for black print, but on the high side for colour. However, the MFC-6490CW is so new that street prices for its consumables aren’t available on the UK Web yet, so we had to use Brother’s SRPs. You should expect prices to come down from these, once the cartridges are more widely available.


The idea of including A3 print in a mainstream, SOHO all-in-one is a good one and Brother has done most of the job well with the MFC-6490CW. However, there are a few odd design glitches that need sorting out before we can give it a recommendation. Automatic paper detection would be prime among these.