There’s growing interest in inkjet all-in-ones that are able to handle A3 documents as well as A4 and Brother has several models that can do this, more or less. More or less because in this model, the MFC-5890CN, A3 support only extends to printing. The machine’s scanner is an A4 unit, so A3 scans and copies are out.


As you might expect with the larger paper capacity, this is not a small machine. However, Brother has managed to style it so it doesn’t take up a lot more desk space than a typical A4 unit. Running down from top to bottom, the machine has a fairly tall Automatic Document Feeder (ADF) on top, with a fold-out feed tray, which projects at a rakish angle when open. 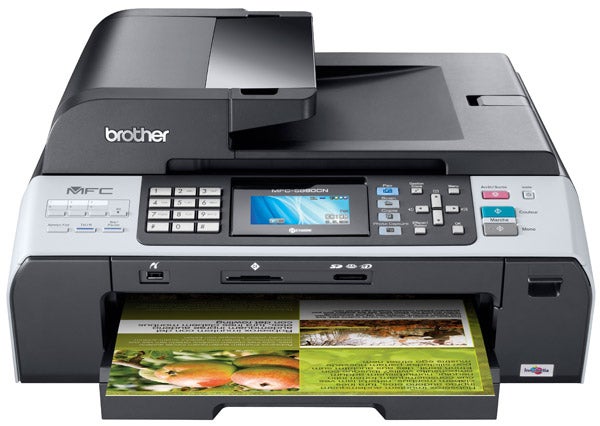 Below that, at the front, is a sloped control panel with all the regular controls. From the left there are dedicated fax buttons, a number pad for dialling, the machine’s LCD display, mode buttons, menu navigation and finally four buttons for mono and colour copying, job cancel and power save mode.


As is now quite common in Brother machines, the LCD display is double width, which is particularly helpful when printing from memory cards – all the common types are supported – as you can see a thumbnail of the image and a menu of options at the same time. 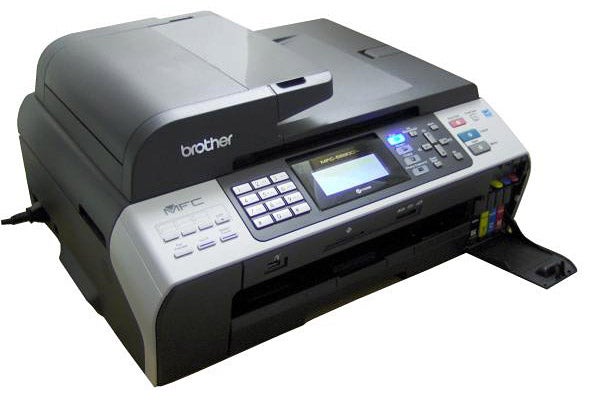 The single paper tray can hold 150 sheets of paper and has no single-sheet feed built-in, but does have an extendable base and top cover, so you only need to enlarge it when printing A3 paper. If most of your work is A4 or smaller, the tray doesn’t project from the front of the MFC-5890CN at all.


Brother doesn’t seem to have worked out yet where connecting sockets are conventionally positioned. The phone line and handset connectors are at the back of the left-hand side, next to the mains socket. USB and Ethernet sockets are tidier, but less convenient, as you have to hinge up the scanner section and reeve the cables through a channel to a position just behind the control panel, inside the machine.

The company does much better with the ink cartridges, all four of which slide in behind a flip-down cover to the right of the paper tray. A one-off charging cycle then has the machine ready for printing within a couple of minutes.

As usual, print speeds appear to have been picked from the ether and Brother quotes 35ppm for black print and 28ppm for colour. Even in draft mode which, incidentally, produces better print than some and is probably usable for internal documentation, we can’t see how you could reach those speeds.


In our tests, a five-page black text print took 1min 14secs, equivalent to 4.05ppm and when we ran the 20-page test, which helps cut out any processing time, the speed only rose to 4.53ppm, around one sixth of the rated maximum. Our five-page text and colour graphics print took 1mins 55secs, or 2.61ppm, so for all the standard, plain A4 pages the MFC-5890CN is slower than several of its direct competitors. 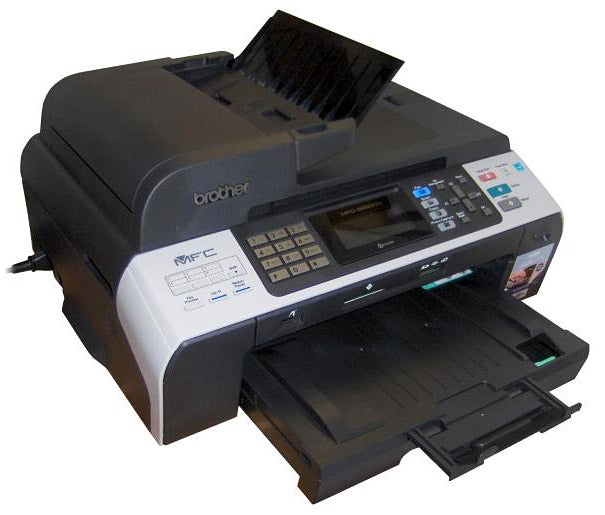 The machine is a bit quicker, proportionally, when printing A3 pages. A five-page text print completed in less than two minutes and the equivalent text and colour graphics page took just under three minutes.


Photo prints were more on a par with rival machines, too. The Brother printer produced a 15 x 10cm photo in its highest photo mode in 3mins 46secs, but in the default Photo mode it took just 1min 39secs and there’s very little visible difference between the two. Prints from an SD card and from the machine’s PictBridge socket each took 1min 42secs. A full-bleed A3 photo took a coffee break-inducing 14mins 30secs.


Print quality is reasonable for text, with only a little bumpiness visible around curved characters. Colour graphics also reproduced reasonably well, too, though without much life to the colours. Registration of black text over colour is good. 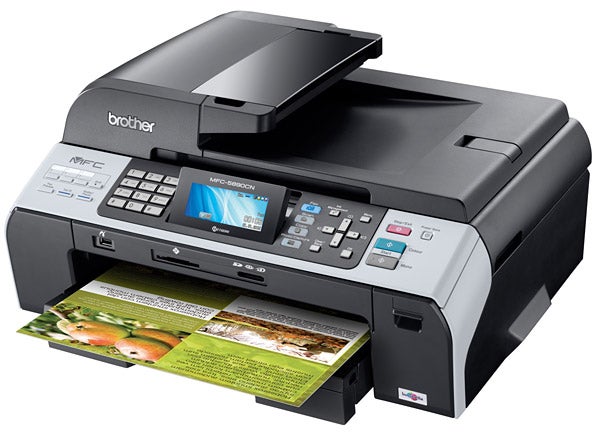 A single-page copy from the scanner glass shows some loss of colour, making the copies look even more insipid, but the result is usable. Photo prints are well reproduced, with natural colours and high levels of detail, though they are not quite as realistic overall as the best offerings from Canon or HP.


Scanning photos to a PC shows the same lightening of hue as with copies, though the scanner head’s surprisingly high optical resolution of 1,200 x 2,400ppi means detail levels are good.


The four ink cartridges are the only consumables on this machine and we found them at prices which give costs per page of 2.68p for black and 6.10p for colour. The black print cost is about average for a machine in this class, but the colour cost is a couple of pence per sheet lower than most of its rivals, giving good economy, overall.


Brother’s MFC-5890CN is a worthwhile, workhorse all-in-one, from a company that is an increasing force in business multifunction machines. It’s better suited to somebody who needs occasional A3 prints than the person who is regularly printing A3 materials, and you will need to look to another model if you want to scan or copy at the larger size.