This is the smallest of Brother’s larger scale, inkjet all-in-ones. It has the same basic design as machines going all the way up to the company’s twin-tray, A3-capable devices and looks surprisingly squat, given its single tray. It’s aimed at the SOHO market, so we’d expect a reasonable turn of speed for home or small office duties.


The MFC-5490CN is a chunky printer, though it has a low profile when not in use. This is slightly increased when you flip open the 30-sheet Automatic Document Feeder (ADF). Printing paper feeds from a 150-sheet cassette, which slots in at the front, though there’s no separate photo feed and you’ll need to remove the plain paper to load photo blanks. 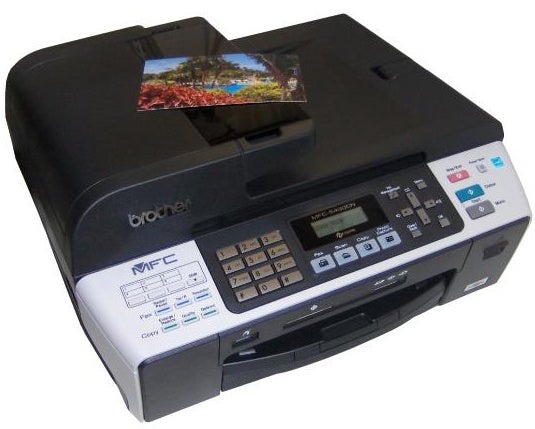 The full-width control panel includes a backlit, 2-line by 16-character LCD display, with four illuminated mode buttons in front, selecting fax, scan, copy and photo capture. To the right of these buttons is a cross of navigation controls and four other subsidiary buttons, while to the left is a number pad for fax dialling.


There are six, single-click dials to the left of the number pad and other buttons to set fax and copy parameters. At the extreme right end are mono and colour start buttons, and one to stop a current job.


This all-in-one has USB and Ethernet connections as standard, with both set inconveniently inside the machine so you have to feed cables through from the rear. Fax line and phone sockets are positioned next to the mains connection on the left side.


Brother provides drivers for Windows and OS X on the accompanying CD and a Linux driver is available for download. As usual with its all-in-ones, the company provides OCR software, and as well as its own scanning support application.

On the front page of Brother’s Web site it advertises interesting features of its inkjet kit and quotes speed as one of them. We’d have thought the company would want to keep quiet about this aspect of performance. It may quote fast speeds of 35ppm and 28ppm for black and colour print, respectively, but for the majority of people printing in normal print modes, speeds are close to one tenth of these figures. 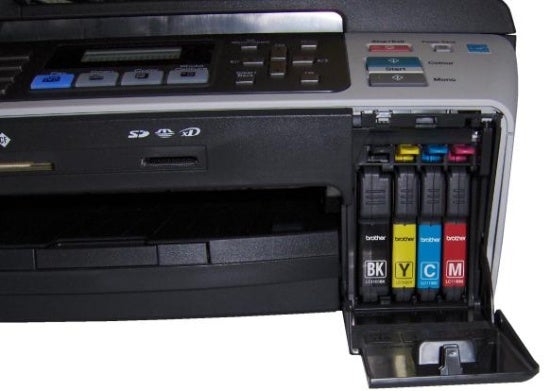 To an extent, all printer makers exaggerate their machine’s print speeds. They have made a rod for their own backs, as they all need to show that they’re up with the pack on speed. Brother, however, looks worse than most, as it only quotes these draft speeds.


Compare the results from the MFC-5490CN with those from the lower-priced Canon PIXMA MX340. Canon claims speeds of 8.4ipm and 4.8ipm (ipm is page images per minute) for this machine and we measured it at 6.9ppm and 2.4ppm. So, even though Canon claims speeds from a quarter to a fifth of Brother’s, it actually achieves nearly three times the black speed and the same colour speed.


Printing from memory cards on the MFC-5490CN isn’t quite as straightforward as it could be, as first of all it tries to upload images to any connected PC. When you override this, it asks you to pick images by number, so you’re probably best printing a proof sheet on plain paper before you start. It’s much easier to print from a PictBridge camera, where you can preview images on the camera’s screen.


Print quality from the machine is only fair, not up to the best Canon, HP and Lexmark can offer. Black text suffers from not being densely black, though it’s still quite readable, and this paleness is also apparent in colour graphics on plain paper. Although solid fills show no signs of banding, colours are lighter than in originals and show further colour casts in copies from the scanner, with blue to mauve being particularly noticeable. 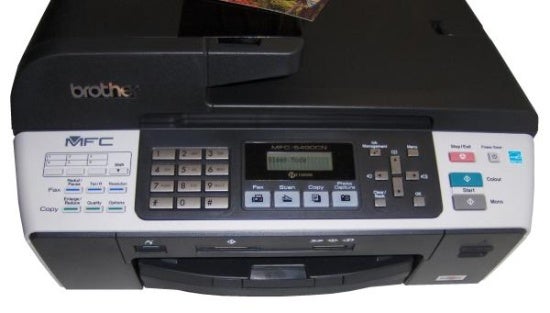 Photo prints on Brother’s own glossy photo paper are crisp and smooth, though a little shadow detail is lost. Colours are generally accurate and detail levels are high.


Brother only offers the LC-1100 CMYK cartridge set for this machine and although the company makes a higher-yield cartridge, which is available to other machines in the range, it makes no mention of them working with the MFC-5490CN. Using the standard cartridges, therefore, gives cost per page figures of 4.3p for black and 9.3p for colour, both including 0.7p paper costs.


The colour costs are on a par with other machines in the same price bracket, but the black cost is about a penny higher than some of the machine’s main competitors.


The MFC-5490CN is a good, middle-of-the-road, all-in-one printer which is easy to maintain and offers all the essential features, including fax. However it’s not particularly cheap to run; its plain paper print performance is a little pale throughout; and typical day-to-day speeds are nowhere near what the spec sheet implies.