Brother is well represented in several categories of office machine, including photocopiers, multifunctions and laser printers, both colour and black and white. The HL-5270DN is a duplex mono laser, designed for the small workgroup with three different methods of connection.


The HL-5270DN is a neat, cuboid box, coloured in light and dark grey and with a compact little control panel squeezed in like the arm on a 50’s armchair to the left of the output tray. The controls are well laid out, with a single line LCD display having a three colour backlight. When unavailable (warming up or switched offline) the background is orange, when running it’s green and in error conditions turns red – a clever piece of design.


As well as the usual menu navigation controls and big Job Start and Job Cancel buttons, there’s also a small one, marked Reprint. This enables you to reprint the last job directly from the printer, even if it was a multiple page print, rather than having to return to your desk and do it from there – a useful time-saver.


A paper tray at the bottom of the front panel is the main paper feed and takes up to 250 sheets of standard stock, while the multi-purpose tray that folds down from the front panel can take another 50 sheets or a variety of special media. A third tray, which can take 500 sheets, is available as an option. 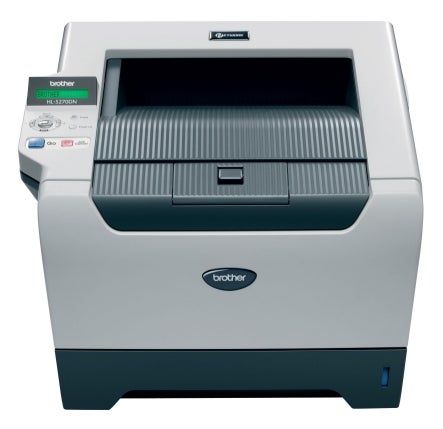 At the back there are sockets for USB 2.0, parallel and Ethernet connections as standard – it’s unusual to have all three sockets on a printer in this category.


The drum and toner unit slides in easily from the front of the printer and is a two-part assembly. The drum is designed to last for between three and seven toner cartridges, depending on whether you use standard or high-capacity cartridges. The toner cartridge clips into a cradle in the drum unit. You need to remove the whole unit before transporting the printer any distance.


Software installation is simple and Brother provides both PCL 6 and BR-Script 3 – its own PostScript 3 emulation. There’s an admin application, too, so you can monitor and control the printer across a network.


The HL-5270DN is said to be capable of 28ppm but, as usual, this claim is fanciful. Under test we completed of our five page text print and five page text and graphic print each in 19 seconds. This gives the machine a real-world print speed of just under 16ppm; no sluggard, but only a little over half the claimed speed.

We tested the duplex print speed and completed our 10-page, 20-side test piece in 1 minute 41 seconds, a speed of around 12 sides per minute; again, more than reasonable.


Both photo prints suffered from some banding across areas of sky, but in general were above average, with good levels of detail, particularly in shadowed areas. Text and graphics came out well, with text being dense and with little noticeable spatter. Graphics also suffered little from the various dither patterns used to produce greyscales.


Pages feeding from the printer had a noticeable amount of page curl, so much so that the top page in the output tray would occasionally be caught by a sheet emerging from the printer. The curl reduces as the pages cool, but you may need to pick a specific laser printer paper, rather than general office stock. 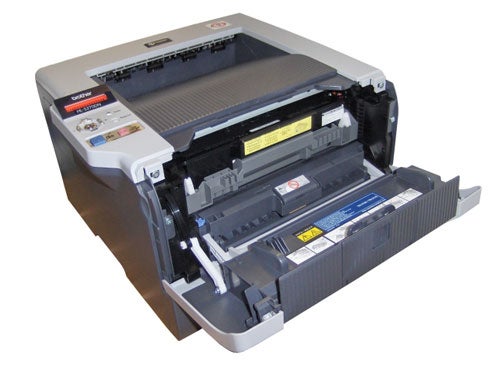 Brother doesn’t quote a noise level figure and this may be because the HL-5270DN is comparatively loud. We measured it at peaks of 63dBA, while other machines in its class can be 10dBA quieter.


There are two consumables: toner and the photoconductive drum. Toner can be bought in 3,500 and 7,000, 5 per cent cover capacities and the drum should last for 25,000 sheets. This produces a cost per page of 1.62p, a good figure for a printer in this class. Maintenance is easy, though a little more fiddly than with the single-consumable printers, typified by Canon and HP. The simpler the maintenance, the quicker and cheaper it will be, of course.


You can do a direct comparison between the Brother HL-5270DN and the Lexmark 352dn, reviewed three weeks ago. This machine, even at street prices, is around £40 cheaper to buy and 0.2p per page cheaper to run. It’s a touch slower when printing, but printed output, particularly of business graphics, is of slightly higher quality. It has that useful Reprint button and overall is, in our opinion, the better buy.