We thought perhaps we could save on some photography when we unpacked Brother’s HL-4570CDW workgroup colour laser printer, as it looks so similar to the HL-4150CDN we reviewed a few weeks back. This printer is £130 more than the HL-4150CDN, though, and for that you get a faster print speed and wireless connection.


This machine is very similar to the HL-4150CDN, featuring the same black and cream livery and large, monolithic look as its lower spec cousin. The 250-sheet paper tray sits below a fold-down, 50-sheet multi-purpose tray that has a slide-out and flip-open paper support. Fine for occasional jobs, it’s not something you’d want to leave open, as the support is a little flimsy and could break if walked into. 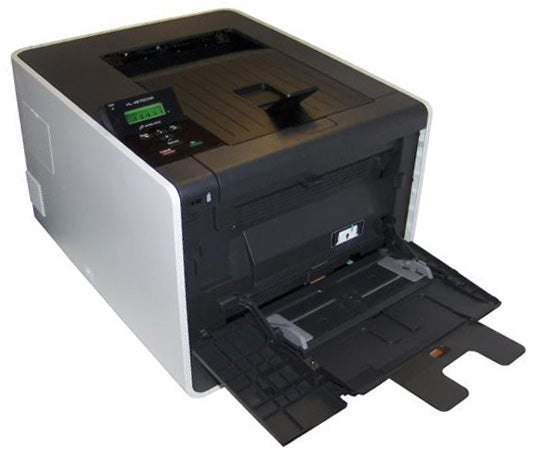 A further 500-sheet tray is available as an option, but we still feel a printer aimed at the workgroup should be able to load more than 300 sheets as standard. The top panel has no output tray as such, with pages finishing up sitting flat on its top surface. There’s a flip-up paper stop at the end to keep them tidy.


The high-gloss, black control panel has seven buttons for menu navigation, and to start and cancel print jobs. There’s also a Secure-print button, so you can hold a print job until you’re standing at the printer. The fold-up, 2-line by 16-character LCD display has a yellowy-green backlight. Just over the front lip of the printer is a USB socket, enabling you to print graphics files directly from a USB drive. 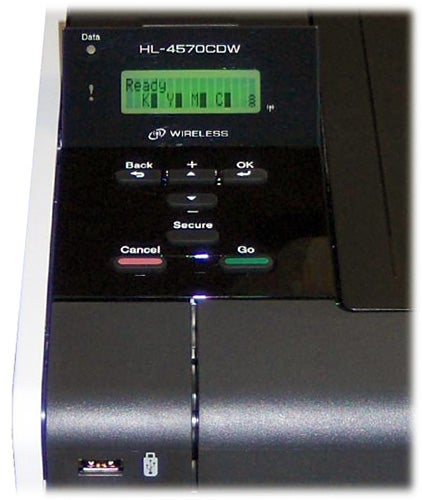 USB, 10/100 Ethernet or wireless connection: the choice is yours. If you go for wireless, you can link up using a pin number, enter a passcode or use a single-button connect, if your router is fitted with one. All three are straightforward and the installation applet spots the printer and completes the connection.


As usual, drivers are provided for Windows and OS X, and you can download a Linux version from the Brother Solutions site. Both PCL6 and PostScript Level 3 support is provided in emulation.


The toner cartridges are pre-installed, but you have to fold down the front panel and slide out the rack holding them, to remove several packing pieces before you can start printing. There’s a separate drum, transfer belt and waste toner box, but these need no special preparation.

The HL-4150CDN is rated at 24ppm for both black and colour print, while this printer is specced 4ppm faster, at 28ppm. Interestingly, under test there was some crossover between the two, with our five-page black text print completing in 20 seconds on the ‘slower’ machine and taking 22 seconds on the ‘faster’ HL-4570CDW.


When we moved onto the longer, 20-page test, however, things were more as we expected, with the cheaper machine recording 19ppm and this one clocking in at 23.1ppm, not far off its rated speed. Duplex speed here is 13.1ppm, while the HL-4150CDN could only muster 12.5ppm. 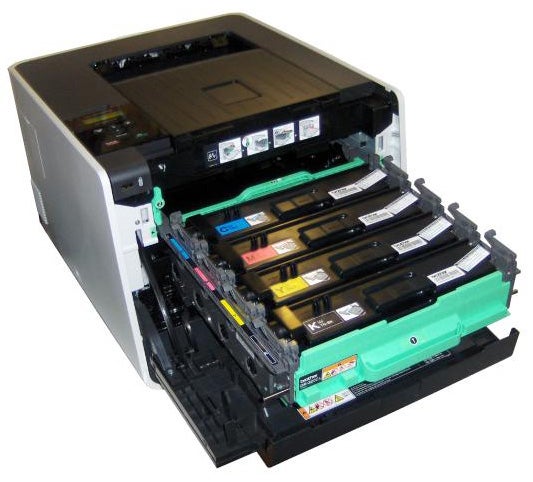 The quality of the prints this machine produces depends on the content of the page. For straight black text print, it gives good, clean, well-formed characters with few signs of artefacts.


Colour graphics are intense but over-dark by default, so light blues become mid-blues and mid-blues, dark blues. Black text over coloured fills, while showing little signs of haloing, is sometimes difficult to read because of this over-darkening.


The effect can also be seen in photographic prints, where pale skies start to glower and shadow detail disappears altogether. These effects weren’t as apparent on the HL-4150CDN and since both printers use the same colour laser engine, it could just be variation from one sample to another. Even so, the review HL-4570CDW doesn’t produce particularly good colour print. 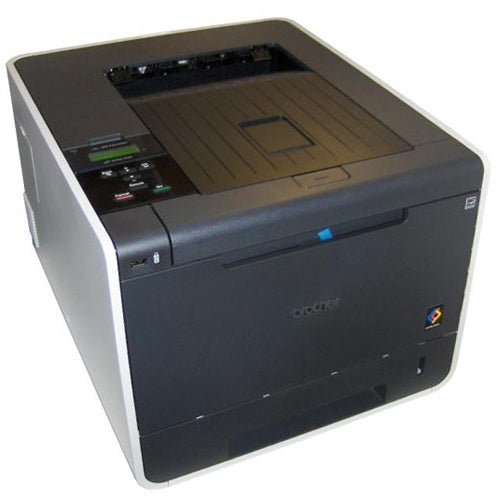 In the few weeks since we reviewed the HL-4150CDN, this new range of printers and its consumables have become available through some discount channels. As well as the standard and high-yield toner cartridges available for that machine, the HL-4570CDW can also take an ultra-high yield version, rated at 6,000 for black and colour. Using these consumables gives a cost per page, including 0.7p for paper, of 2.7p for black and 10.1p the colour, both of which are considerably lower than from the earlier machine.


This is still not that economical, when you compare it with a machine like the £506 Samsung CLP-770ND. Page costs there are 2.1p and 7.3p for black and colour, respectively.


Like its cheaper sibling, Brother’s HL-4570CDW is a solid, workgroup colour laser. It’s a bit quicker and includes wireless networking support, but the £130 difference between the two models still seems a bit steep. The print speed is fine, duplex print is useful and the running costs are lower than before, but colour print is too dark by default and settings may need tweaking if you want to get reasonably accurate tints for photos.