We’re getting to know this new range of workgroup laser printers quite well, as they all use the same laser print engines and similar cases. This one is the baby of the group, though, not having the HL-4150CDN’s duplex print, nor the wireless connection of the HL-4570CDW. It’ll be released in early January 2011 and is expected to have an Internet price of around £300, so a good deal cheaper than either of the other two.


The same, large black and white case as the other two machines looks purposeful and takes up a good proportion of a standard office desk. The top is flat, with a flip-up paper stop near the front, which you’re only likely to need for longer documents. 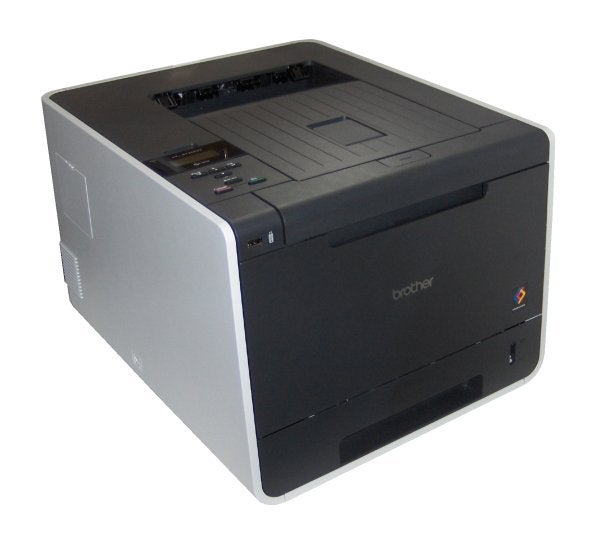 To the left of the paper output tray is a small, neat control panel, including seven buttons and a 2-line by 16-character, backlit, flip-up display module. The screen offers fairly crude graphical display of toner levels and text display of both menu options and status messages.


Just over the front edge of the screen printer is a USB socket, which enables direct print of various graphics file types, including PDF, JPEG, TIFF and PRN. Navigation, using the two lines of the LCD display, is a bit hit or miss, but it’s still a useful facility. You can combine it with the secure print Brother offers, to limit its use to selected staff.


The main paper tray can take up to 250 sheets of plain paper and there’s a 50-sheet multipurpose tray, which folds down from above this. The paper support is a little flimsy, so you won’t want to leave it open for people to knock into as they go by. A 500-sheet tray is available as an option, to sit underneath the main printer and increase the maximum paper capacity to 800 sheets. 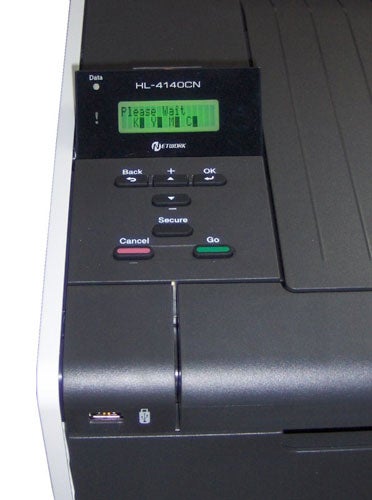 Hardware installation is fairly straightforward, as all the drum and toner cartridges are provided pre-installed, though you have to slide the cartridge drawer open from behind the front panel and remove packing pieces before you can start to use the machine.


Software installation is also easy, with support for both PCL 6 and PostScript L3 provided for Windows and OS X operating systems directly from the CD. If you choose Linux support, the appropriate Brother Solutions site is opened in your default browser, so you can download a driver from there.

The HL-4140CN is rated at 22ppm for both black and colour print, a full 6ppm slower than the HL-4570CDW. In reality, though, it depends on the kind of document you’re printing. Although both machines are quick off the mark at starting to print, short documents won’t take a lot longer on this one than on the more expensive printer.


Our five-page black text print took 22s on the HL-4570CDW, but only 21s on the HL-4140CN. Increase the length of the document to 20 pages, however, and the tables are turned, with the more expensive printer taking 52s, while this one took 1:08. The five-page black text and colour graphics test took 31s and a 15 x 10cm photo printed on an A4 sheet finished in 26s.


The quality of prints from the HL-4140CN is very similar to that produced by the other two from the range. Black text is clean and well formed, with no noticeable smudging, even on emboldened headings and it produces smooth diagonals and curves from its 600dpi print engine. Toner save text is slightly more jagged, but is quite acceptable on the internal documents for which it is intended. 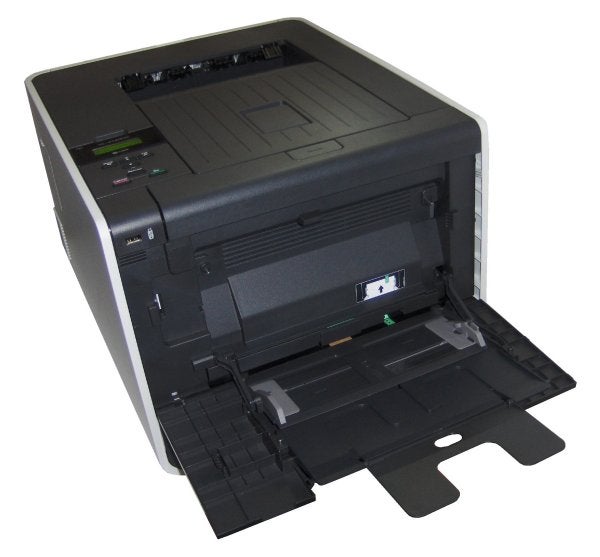 Colour print is very bright and vivid, ideal for graphs and charts, though putting text over these colours can swamp them, as the colours come out rather darker than the originals show on-screen. This shows up worst on photo images, which, by default, lose a lot of their darker detail and are reproduced in a rather over-saturated manner.


One of the other differences between this Brother printer and the other two we’ve reviewed is that this machine is restricted to standard and high-yield toner cartridges, without access to Brother’s ultra high-yield consumables. This increases the maintenance frequency, but more importantly means the page cost is higher.


We calculate an ISO black page will cost 3.0p and a colour one 12.5p. Both these costs are still reasonable, when compared with other workgroup laser printers in the same price bracket.


The Brother HL-4140CN does pretty well as an entry-level, workgroup colour laser printer, offering good speed and reasonable print quality in a printer costing only just over £300. As it uses the same engine as its higher cost siblings, it’s well up to general business tasks in even a fairly busy, modern office. Running costs are very competitive and if you’re after true colours it’s only really the over-dark colour rendition which may need some compensation.