We recently reviewed the Brother HL-4040CN colour laser printer and were generally impressed with this £300 offering in the SOHO market. It’s more expensive sibling, the HL-4070CDW, has three upgrades on offer for the extra £200 in its asking price: duplex print, wireless connection and a PostScript emulation, in the form of Brother’s BR-Script 3 page description language.


Physically, the two printers are very similar, though the HL-4070CDW has a cream front panel, to the HL-4040CN’s dark blue. Both machine’s have 250-sheet paper trays and pull-down, 50-sheet multi-purpose trays, and both use the same inline colour laser engine, so black and colour pages should take the same time to print.


The two-line LCD display uses a three-colour backlight, which turns green when the printer is ready or printing, orange when you’re making setting changes and red in error states, such as when covers are open. A four-way square of control buttons is supplemented by Go and Cancel buttons and two for Reprint and Direct Print, more of which later. 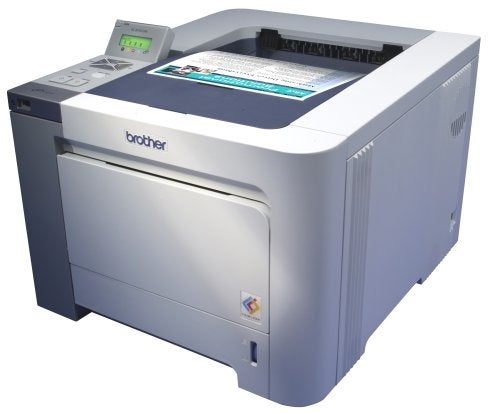 The HL-4070CDW has four distinct ways of connecting to a PC: USB, parallel, cabled network and WiFi, with sockets for the first three set into the back panel. Installation and setup is pretty straightforward, particularly on the physical consumable side. Open up the front of the printer and you can slide out the tray holding the four toner cartridges. Each of these slots downward into the tray and their handles fold down to lock them in place.


Software setup from the supplied CD is also easy, though there are several different ways of setting the printer up for wireless networking. You can temporarily connect it to your wireless router; use SecureEasySetup if your router supports it or run the built-in setup wizard from the printer’s control panel. We found this last method particularly easy, as the printer discovered our network immediately and made the necessary settings changes.


There’s not much software supplied with the printer, other than the driver and wireless support, though BR-Script 3 does enable you to print any PostScript file, as an alternative to using the dedicated driver.


There are two functions of this printer worth particular mention. Direct Print enables you to print files from a USB memory drive or a PictBridge camera, while Reprint does what it says and re-runs the last job sent to the machine. This is a particularly useful function if you want to print one copy to check output and then run off multiples from the printer, without having to send the job again from your PC.

Plug a camera into the convenient USB socket on the front of the HL-4070CDW and you can control the images you print using the display on the camera, while with a memory drive, you use the printer’s control panel to select the images to print. This is surprisingly straightforward and the Brother firmware enables you to select any PDF, JPEG, TIFF or PostScript file for printing.


Brother claims print speeds of up to 20ppm for both mono and colour print. As always, this is ambitious and our five-page mono text print took 38 seconds via USB, though just 27 seconds when connected wirelessly. Even faster, though, was the five-page colour test file which finished in 26 seconds under USB. Although this is quite quick, at 11.5ppm it’s only just over half the rated speed. 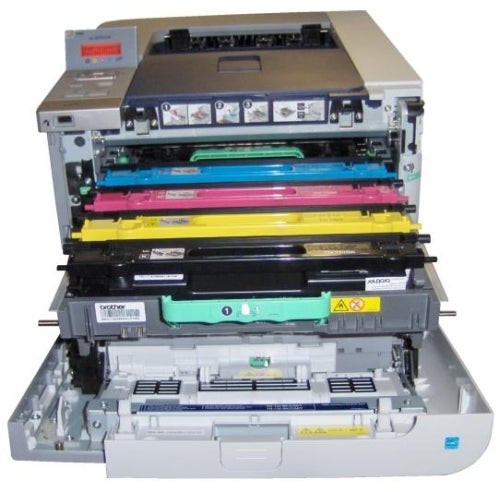 The HL-4070CDW is a duplex printer and Brother has contrived the print flow to follow the second side of a page in a multi-page job with the first side of the next page, almost immediately. This is a commendably efficient way of doing things and duplex print is quite a bit quicker than half the speed of single-sided print. Our 20-side document took 2 minutes 49 seconds, which equates to 7.1spm.


We weren’t that impressed with the print quality of the HL-4040CN, but oddly, given that they both use the same print engine, output from the HL-4070CDW is noticeably better. There’s much more detail in darker areas of our test photo print and overall the colours are less garish. While this may be just a change to the default settings on the 4070, it’s certainly a change for the better.


Colour business graphics are generally clean, though with some slight registration problems, when printing black over colour. Black text itself is very well formed, with no sign of toner spatter or jaggies, when using the 600dpi default resolution. 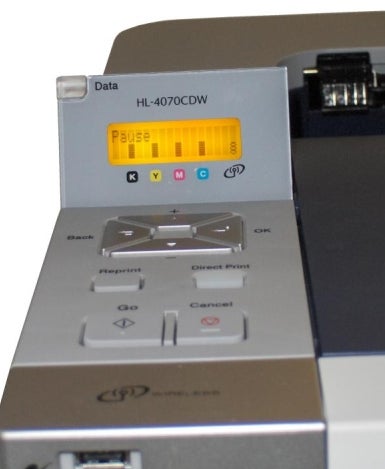 There are four main consumables in the HL-4070CDW: the toner cartridges, a drum unit, a belt and a waste bottle, all of which have different service lives. There are two different cartridge capacities: 1,050 and 4,000 pages for colour and 2,500 and 5,000 pages in black. The drum unit should last 17,000 pages and the belt, 50,000 pages, so none of these components can be considered lifetime parts.


Doing the arithmetic gives a cost per page for 5 per cent black text print of 2.5p and a cost for 20 per cent colour of 8.32p. The black print cost is therefore slightly above average, but the colour cost is roughly 1p per sheet less than its main rivals.

Duplex print is definitely an advantage for any office printer, particularly when we are all trying to save resources, such as paper. PostScript compatibility is also a useful extra, particularly for those printing from Adobe software, while wireless connection is good if you don’t have easy access to a network cable from your router.


Whether these three features are worth the extra £200 Brother asks for the HL-2070CDW depends on your particular printing needs, but the print quality, as tested with this sample, is strangely better than from the HL-4040CN and this certainly helps elevate it above its cheaper sibling.