Until recently, OKI was the only printer maker to use LED illumination in its printers, rather than a laser beam, but at the end of last year Brother introduced a range of LED-based printers using similar mechanisms. One example is the HL-3070CW. It’s aimed at the SOHO market, though it sits at a slightly odd price between the entry-level, £150 colour printers and the ones aimed directly at businesses, which come in at £300 and above. 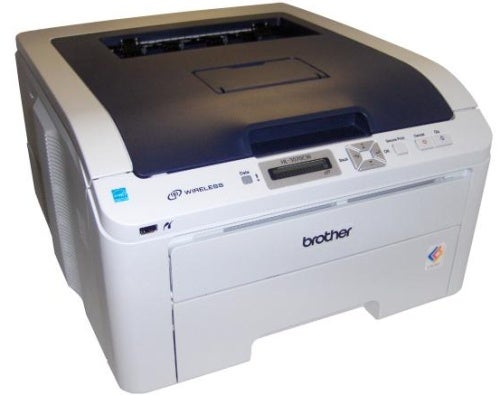 Thanks to the compact LED mechanism the HL-3070CW has a surprisingly low profile and, although it’s quite deep, it still has a very convenient footprint for the small office. There’s a 250-sheet main paper tray with a flip-down, single-sheet feed directly above. All print jobs finish on the top surface of the machine. There’s a pop-up paper stop, which you’ll probably need to set even though each page then makes a slight scraping noise as it slides up the moulded surface.


Although slim, the control panel has all the necessary functions built-in. There’s a single line, 16-character LCD display, with a good backlight and next to this is a square of buttons for menu navigation and then two to start and cancel print jobs. In between a button marked Secure Print enables you to send a print job but only have it execute after you’ve reached the printer and entered a PIN number.


There’s a front panel USB socket, unusual in a colour printer in this price range, which can handle both PictBridge print from a camera and certain file types, such as PDF and TIF, from a USB drive. Navigation of a folder structure on a single line LCD display is a little awkward, particularly when filenames are shortened. 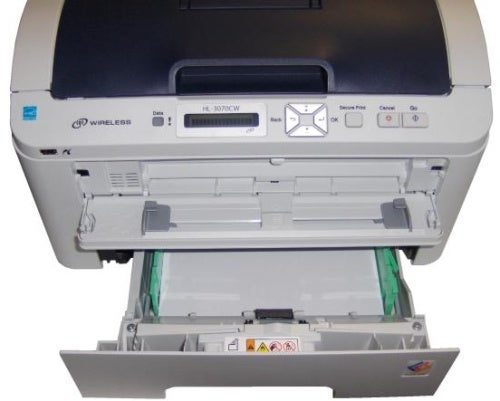 Physical setup is very straightforward, as the top cover lifts to reveal the four combined drum and toner cartridges, which slot down into place with a minimum of fuss.


USB, Ethernet and wireless connections are available. Unless you have an automatic wireless connection system on your router, such as Secure Easy Setup, Wi-Fi Protected Setup or AOSS, you need to be able to connect the printer temporarily to your router via USB, or set a wireless PC to infrastructure mode for the duration of the setup. Neither of these techniques is straightforward.

Brother rates the HL-3070CW at 16ppm for both black and colour and we got quite close to this with our 20-page document, where the printer achieved 13.5ppm. Our shorter, five-page black text and colour graphics job only came through at 8.1ppm, though, and the warm up and processing times for the machine varied between 15 seconds and 35 seconds, so you may have to wait if you only print occasionally.


Print quality from the machine depends on the content. Black text looks a little thin in comparison with some lasers, but is sharp and without jagged edges, even at the default 600dpi resolution.


Colour graphics are solid and bright, though blues and greens came through noticeably darker than the on-screen colours of the documents we printed. This darkening of natural tones also showed up in the photographic images we printed, where skies were dark and a lot of shadow detail was lost. 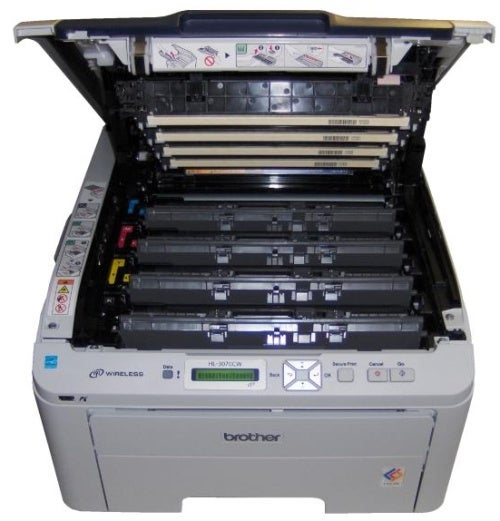 This printer has a maximum resolution of 2400 x 600 dpi. However, when we printed our test image at this top resolution there was some noticeable banding that wasn’t apparent in the 600dpi image. Consequently we’d recommend using the lower resolution for day-to-day work.


This is one of those printers with a lot of consumables. The drum and toner cartridges are each two-part pieces, where the toner lasts either 2,200 pages, in the case of black, or 1,400 pages, for the three colours. The drums are claimed to last for 15,000 pages, while the belt and waste toner bottle should go on for 50,000 pages.


Having more consumables doesn’t in itself mean a printer is more expensive to run, of course; this depends on the price placed on each part by the manufacturer. In this case, though, it does, with the cost of an ISO black page coming out at 3.7p and that for an ISO colour page reaching 15.7p, both costs including 0.7p for paper.


A machine like the Dell 2130CN has equivalent costs of 3.4p and 11.5p. This makes the Brother machine look a little pricey on black, but around 4p per page over the odds for colour. This is a shame, but looks more like a marketing decision than a result of the technology used.


The HL-3070CW doesn’t fulfil its potential. The elegant simplicity of the LED engine, which gives the printer its compact lines, doesn’t reduce its running costs, nor improve the colour print quality in any noticeable way. While the printer itself is inexpensive for the speed at which it is rated, it’s comparatively expensive to run, particularly if its workload consists of a lot of colour documents.