LED printers are inherently simpler than laser printers, so it’s hard to see why more companies haven’t switched technologies in order to save on manufacturing costs. Brother’s inexpensive HL-3040CN LED colour printer is intended as an entry-level machine and comes in at well under £200. It suits the SOHO market and would be just as at home printing school reports, as it would house particulars. 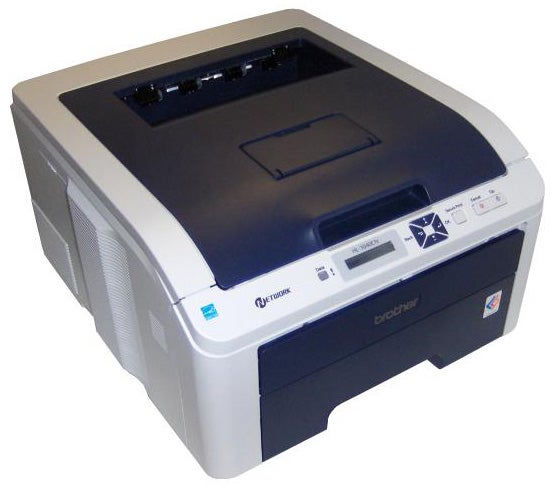 Partly due to the simpler mechanism, which uses strips of high-intensity LEDs to remove the charge on the photoconductor drums, rather than scanning laser beams, the printer has a lower profile than most.


The four cartridges slot in, one behind the other, under the printer’s lid and paper feeds from a 250-sheet tray or a single-sheet multi-purpose slot and ends up on the top of the machine. When printing multi-page documents, you need to raise the flip-up paper stop to prevent pages sliding off the front.


A small control panel sits as a strip across the front of the printer. There’s a single-line, 16-character LCD display that suffers from not having a backlight, but is readable under good overhead light if you turn down the contrast. A square of control buttons navigates the menu system and there are Go and Cancel buttons for basic job control. 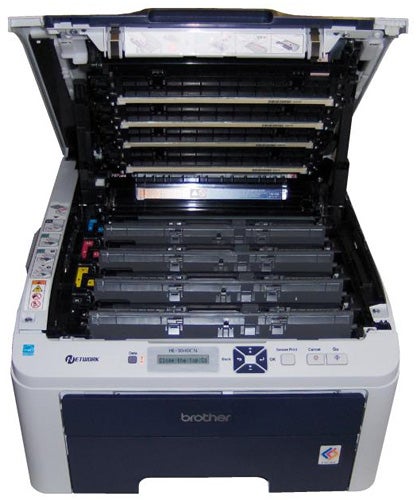 More interesting is secure print. You can create a numeric PIN for any print job from within the driver and the job will be held in the printer until you enter that PIN, using the control square on the control panel. The only limit is the internal memory in the machine and you can have several jobs with different PINs held at once, though held jobs are lost when the printer’s switched off.


There’s no front panel USB socket, but both USB 2.0 and Ethernet are provided at the back. The four drum and toner cartridges are fitted as integrated consumables, but the toner hoppers can be detached from the drums and have different service lives. They’re very easy to replace.


This is a GDI printer, so it uses neither PostScript nor PCL printer languages. Drivers are provided for Windows, right up to Windows 7, and for OS X. Linux is also supported via separate, downloadable drivers.

Brother rates the HL-3040CN at 16ppm for both mono and colour print and, under test, we got close to that. Although the five-page black text document only reached 6.1ppm and the toner save version – as close as Brother gets to draft mode – only increased this to 9.4ppm, the 20-page document completed in 1min 23 seconds, which is a speed of 14.5ppm.

The five-page black text and colour graphics document reached 9.1ppm and a 15 x 10cm photo on A4 paper took 45 seconds in the highest resolution, 2,400 x 600dpi, Fine mode. These speeds are all reasonable for a machine at this price point and mean you could sensibly use it as a mainstream mono printer as well as with colour, when needed.


Print quality is noticeably better than from the DCP-9010CN, which we thought at the time was showing a problem with our individual review sample. Black text is clean and well-formed with no signs of toner spatter and clean emboldened text, which doesn’t look thick and overdone.


Toner save mode, while being a little rough round the edges, would be fine for day-to-day internal documents and could save money on consumables use. 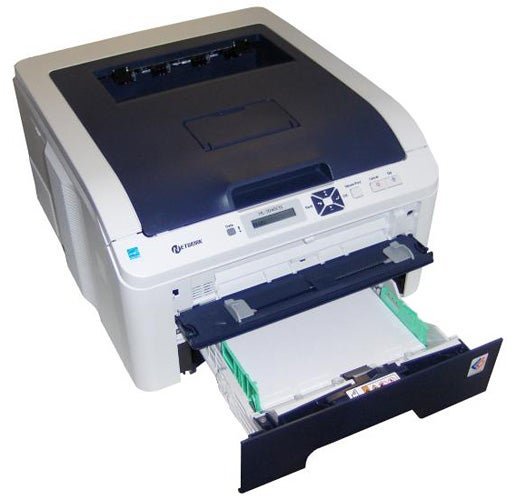 Colours are clean and definite, with little sign of any banding. Although you can see some dithering, this is unobtrusive and registration of black text over colour is good, with no signs of haloing. The colour photo test is a little light on red and there’s some banding visible but, against this, the colour gamut is better than some and doesn’t give the over-vivid effects seen from some other printers. There’s even some reproduction of shadow detail, often lost from inexpensive colour lasers.


There are four different consumables in the HL-3040CN, though the transfer belt and waste toner bottle each have a service life of 50,000 pages and will only need to be replaced once during the printer’s life for many customers. You should be able to fit between six and seven black toner cartridges for each change of drum unit and 10 or 11 colour ones, saving costs over, perhaps more convenient, combined drum and toner cartridges.


The cost per page works out at 3.8p for black print and 14p the colour. Both these costs are a bit on the high side, compared with other entry-level colour laser printers, with the colour cost being between 1p and 3p more expensive.


This is a neat and serviceable colour printer, which is nearly as quick as its specification, is easy to use and produces good quality colour print. It’s a bit more expensive to run than some, but its secure print feature could be useful in situations where it has to be shared between several people who need to keep their documents confidential.