Colour laser printers are already taking over in many offices from their mono counterparts, with the average purchase price dropping. It’s not exaggerating to say that a colour laser of the specification of Brother’s HL-2700CN would have cost eight to ten times its current price just a few years ago. But how does it perform?


This is a big printer, though only printing up to A4, and is probably better installed on its own stand or table, than sat on the end of an office desk. Paper feeds from a surprisingly low capacity, 250 sheet paper tray at the bottom onto the printer’s top surface. There’s no single sheet feed for special media and you have to manually select for paper thicker than 90gsm, though the printer will take up to 210gsm.


Set in at front left is a control panel of six buttons, with a two-line by 16-character LCD display, which includes a crude level indicator for each of the four toners. Although the display is clearer than some, it could still do with a back-light.


The front, top and side panels all fold out for access to the internal mechanism and an optional duplex unit can be attached to the back to provide two-sided printing. A second paper tray, with a capacity of 530 sheets, can be fitted underneath. 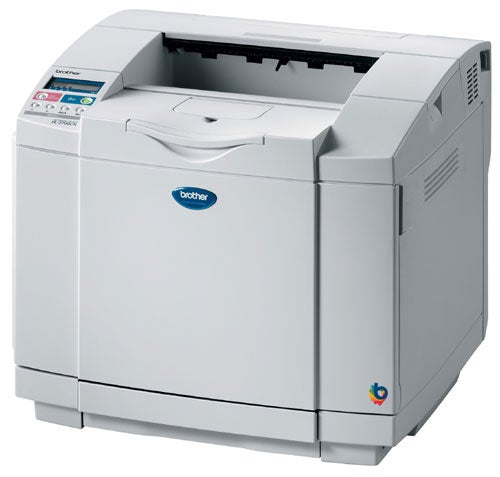 Inside, the printer uses a vertically mounted OPC belt, rather than a drum, with a set of four toner cartridges lined up one above the other in front of it. This makes them very easy to access and replacement of belt and cartridges is a doddle.


Physical set-up is straightforward, but involves quite a lot of releasing of spacers and pulling of protective tapes. The four toner cartridges are supplied in situ, but have to be removed so you can pull off their plastic covers, before being re-inserted. This is still simpler than having them separately packaged, though.


The printer has three connections: USB 2.0, parallel and wired Ethernet. You can connect each or all to PCs, making the HL-2700CN a good candidate for a small workgroup. Software installation is simple enough, with the Brother driver and the BRAdmin Pro applet providing good control of the printer’s facilities.


These include watermarks and overprints and the ability to scale pages on the paper. There’s no multi-page per sheet facility, though, and duplex only comes as a £200-plus optional extra. The HL-2700CN has a native resolution of 600dpi, but Brother claims ‘2,400dpi class’ printing, using CAPT technology.

Colour support is fairly basic. Although you can boost particular colours by setting custom parameters, there’s no provision for colour matching to standards like Pantone or Dai Nippon.


Colour is bit on the bright side. While it’s good for the bright primaries you find in business pie charts, it doesn’t do so well with the subtle shades you typically see in photographic images. By default, the colours aren’t particularly true to on-screen shades with, for example, orange coming out very red. Colour lasers continue to have different and smaller colour gamuts from ink-jet printers, though some recent introductions do better in this area. From our tests, the HL-2700CN isn’t one of them.


Our test photo looked as if it had been retouched rather heavy-handedly, though the sample chart printed as a Brother test page looked perfectly acceptable. Black text is crisp and clean, producing well-formed characters. 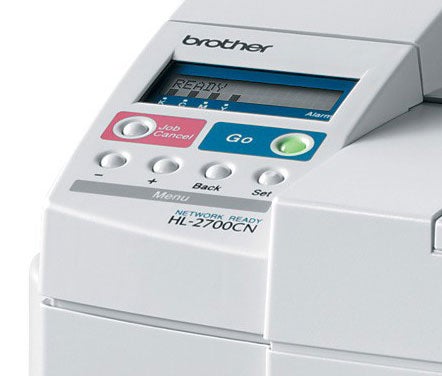 Print speeds are pretty good, with our five page text print finishing in 24 seconds, a respectable 12.5ppm. Our colour test print took 22 seconds, giving under 3ppm, which is still not too bad for a colour laser in this price range.


This is not a printer for putting in a library. Even Brother quotes it at a noise level of 66dBA, when printing. We’d go along with that and add that the greatest part of the sound is a series of clunks, which sound like solenoids pulling the various toner cartridges up to the OPC belt, to lay each colour on it, in turn.


There are a lot of consumables in the HL-2700CN, most of which have different page yields and therefore have to be replaced at different frequencies. From the colour toner cartridges every 6,600 pages, to the waste toner at 12,000 pages and the OPC belt and fuser at 60,000 pages, you’ll need to keep on top of supplies, if you use this printer heavily.


When you work out the costs of all these parts, this Brother is not that expensive to run, with a black text page costing just under 2.5p and a 20 per cent colour page costing around 8.5p. This is similar to other printers in the same price bracket.


The HL-2700CN looks something of a bargain, as you can buy one for under £230. Running costs are no worse than others in its class, so the only downside to this machine is that its colour is a bit garish. It’s also big and rather noisy, but being fast and cheap may well outweigh any problems with over-coloured photos.